I recently visited the rest areas on Northway that have been hyped as information hubs for the Adirondack Park as a tourism destination and as locations that will guide the public about hiking in the Forest Preserve, especially the High Peaks.  These facilities are newly built and function adequately as typical rest areas with bathrooms, vending machines, and places to stretch your legs.

In many ways working for environmental protection is heartbreaking work because it often involves loss no matter the scale of the victory, no matter the lands saved, it’s never enough to mitigate the profound loss of environmental health and ecological integrity that defines our age. These rest areas are heartbreaking because they’re a squandered opportunity and so easily could have been made, and still could, into fully functioning, useful and important sources of public information about the High Peaks and the Forest Preserve. As they stand now, they’re yet another missed opportunity.

Lets start with the new retrofitted Visitors Information Center on the northbound lane of the Northway between exits 17 and 18. It’s a newly built center that is stylish and loosely adheres to the Adirondack rustic architecture vernacular. Adirondack chairs are positioned outside the building. This area has stocked its vending machine food court with local products like Saranac and Cooper’s Cave sodas, Martha’s cremewiches, Oscar’s cheese spreads, Barkeater chocolates, Dak Bars, and a variety of locally made pancake mixes, pasta sauces, chips, and coffee; it’s a big step up and innovation over the standard highway vending machine fare. 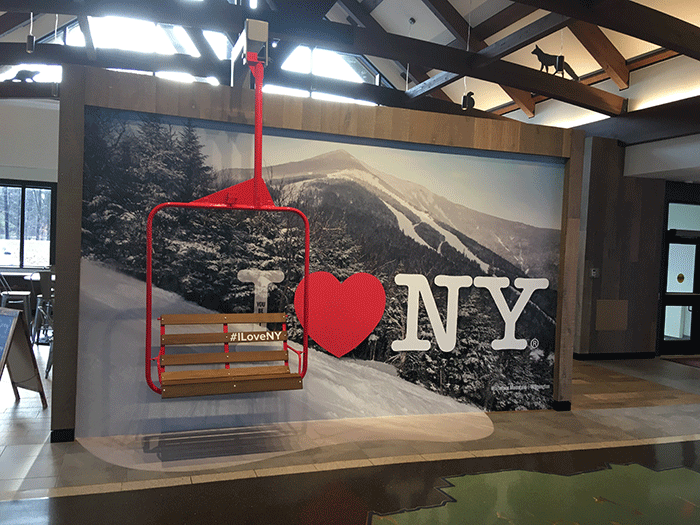 The top picture is the main room of the new Northway Rest Area/Information Center. This area fails to contain information about how to use and enjoy the public Forest Preserve in the Adirondack Park. The picture above shows the facade of rest areas between exits 29 and 30, which again fails to provide adequate public information.

The facility is built around a great room that is centered with a wall-size screen that flashes popular Adirondack Park and North Country tourism destinations that runs for about 15 minutes and is replayed in an endless loop. The photography is generally high quality with lots of drone and aerial footage. The people pictured at various destinations are racially diverse, with lots of families and couples of all ages. Everyone is smiling. Everybody looks healthy.

This is all perfectly adequate tourism promotion. What is missing is any useful information about how to use the Forest Preserve, where to hike, how to prepare for a hike, where to obtain hiking supplies, recommended hikes relative to difficulty, maps of hikes, information about Leave No Trace hiking practices, or any information about overuse or parking issues in the High Peaks Wilderness and associated areas. There is no sign on the Northway alerting travelers to stop and get information to plan their Adirondack hike, which would be useful given the huge number of day-users who come to the High Peaks straight up the Northway. There are three illuminated signs in the building that all advertise the free “Pocket Ranger” NY Fish & Wildlife App. The only hiking information on this app is a list of State Campgrounds that have hiking trails nearby.

The “High Peaks North” rest stop on the Northway northbound lane between exits 29 and 30 has a little more information than its southern counterpart. It has a poster about the Adirondack Park mounted on the wall that advertises “A Park Like No Other,” which provides information about its size, about the fact that the Park has no gate, and, interestingly, that in the Adirondack Park “No single organization oversees management of the Adirondack Park.” The station hosts a trailhead kiosk with information behind glass that encourages hikers to go to “Trails Less Travelled.” This poster lists a half dozen hiking opportunities on less popular trails near the High Peaks. Two suggested trails, the Crows and Owls Head in Keene, currently have less than ideal parking so I question the wisdom of directing large crowds there.

The poster ends with an odd message: “Trails in the eastern High Peaks, to Dix and Giant Mountain are often crowded, ruining the Adirondack wilderness experience.” There are no hiking maps or brochures for the public to take with them, no information or brochures about Leave No Trace, though there is a display case entitled “Ready, Set, Hike” that provides information about the basic supplies that hikers should take in the woods: map, compass, food, water, flashlight/headlamp, matches, crampons, first aid supplies, appropriate clothing. This would be improved if there were a brochure as part of this display with the same information that a person could take with them.

The issue of a High Peaks Information Center has been recurrent since the 1998 High Peaks Wilderness Unit Management Plan was approved. The new Frontier Town Campground is supposed to have a Visitors Center, but it’s a detour off the Northway and I’m doubtful that many people will seek it out. It was a political decision to build a new state facility on that site, not a carefully considered decision made as part of a serious park-wide plan to meet public demand and provide public information and education. It suffers from the same political logic that has beset the two longstanding interpretive centers at Paul Smith’s and Newcomb, which are similarly located off the beaten path, though both ably provide basic Adirondack Park natural and political history information and have information about nearby hiking opportunities. (Thankfully, the Cuomo Administration has started to fund the two interpretive centers to help keep the lights on and people behind the counters.)

I have long envisioned a High Peaks Wilderness Visitors Center located on Route 73 at Exit 30, or at the Crazy Corners intersection of Routes 9 and 73, or in downtown Keene Valley. In my wildest dreams I’ve seen a High Peaks Visitors Centers as something akin to a Visitors Centers operated by the National Park Service at national parks. The basic formula at National Parks is an attractive building with many large dioramas of the park the center serves. There are lots of maps available for the public. There is lots of information about current hiking conditions and recommendations about the gear that people will need that is current with the season and conditions. There’s plenty of information and videos about Leave No Trace and hiking etiquette to protect the natural resources, wildlife, and the hiking experience. But the biggest thing in my High Peaks Wilderness Visitor Center dream is that, like the National Park visitor centers, there is a person, a real human being, if not several of them, at a counter covered with maps and dressed in green field clothes who not only looks the part of a Park Ranger but who has loads of first-hand information to advise people about how to use the resources and plan their trip in the High Peaks. Why is it that the Adirondack Park cannot muster investment in a National-Park-scale visitor center for the High Peaks? 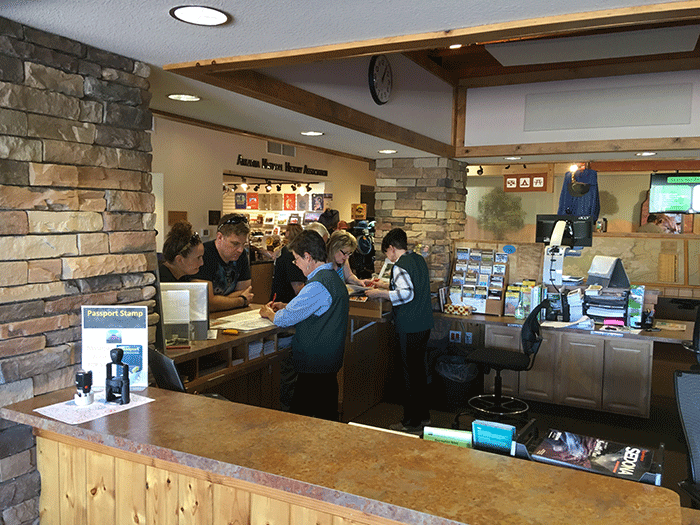 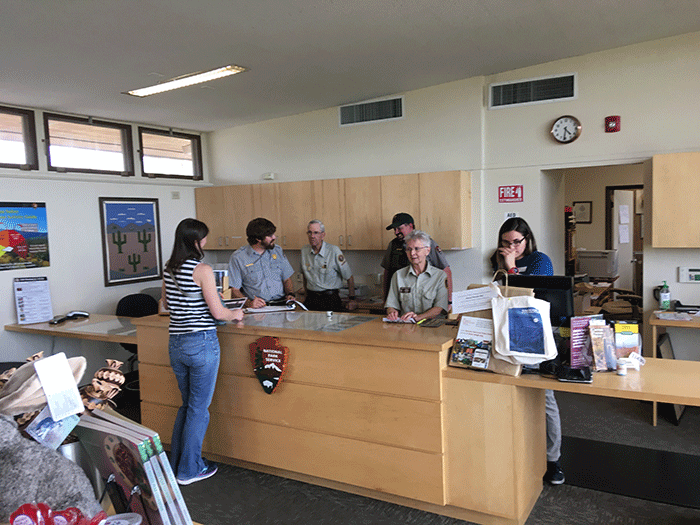 Two scenes from visitor interpretation centers at national parks. These facilities provide excellent information to the public about the recreational opportunities and natural resource protection. The Adirondack Park would benefit from a new High Peaks Information Center.

The need for enhanced public education has long been recognized. The High Peaks Wilderness is a world-class landscape that merits world-class management. It’s high time for the State of New York to invest in the management of the High Peaks.