Water is everywhere in the Adirondack Park. Famous lakes known around the U.S. and beyond, such as Lake George and Lake Placid, are among the 3,000 lakes and ponds that dot the Adirondacks. There are over 1,200 miles of wild rivers, 35,000 miles of streams, and over 1 million acres of wetlands. For many people the abundance of water is what defines the Adirondack experience. Because of the high number of lakeside resorts and lodges Adirondack waters are vital to the local economy. In many ways the waters of the Adirondacks underwrites the high quality of life in the the rural communities of the Adirondacks with easy access to swimming, boating, canoeing and lakeside camping. 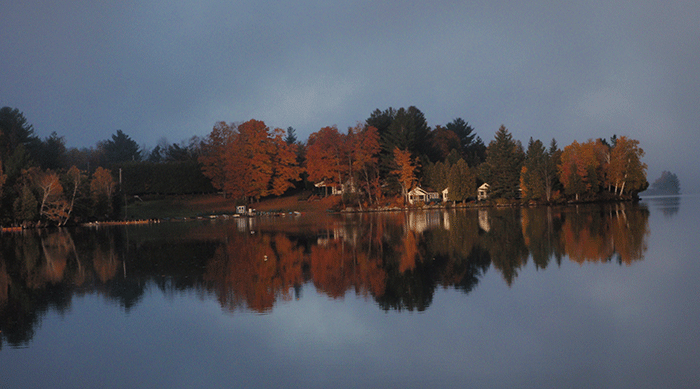 Clean water is what defines the Adirondack experience for many residents and visitors.

The information collected as part of ALAP is used to identify causes of concern that may need action (e.g. faulty septic systems) and to conduct regional analysis to understand how various stressors that impact our waters. For example, ALAP data was used to assess the effects of road salting on lakes in a paper that formed the scientific basis for discussions with state and local officials on curbing the use of road salt to protect our environment.

Click here to read to 2018 report for the Adirondack Lake Assessment Program. 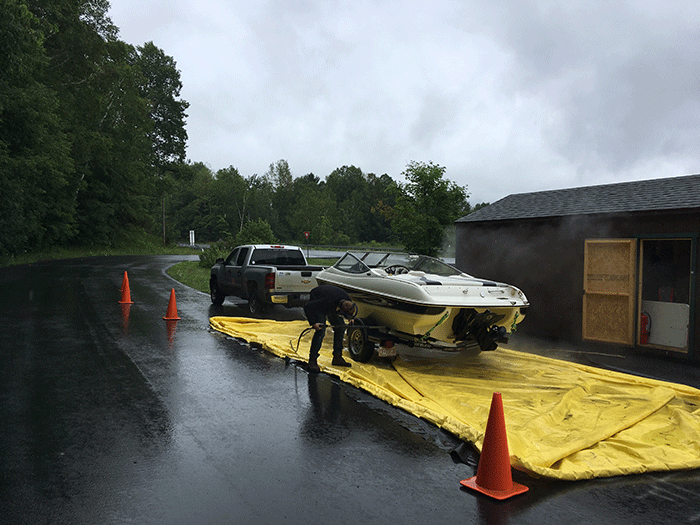 An invasive species technician who is part of the Paul Smith’s College Adirondack Watershed Institute boat control program in the Adirondacks washes a boat in Hamilton County.

Stopping the spread of aquatic invasive species: Infestation with an aquatic invasive species (AIS) is one of the major threats facing the ecological health and economy of the Adirondack Park. AIS can rapidly change the ecology of a lake, wetland, stream or river as well as significantly impair and diminish recreational enjoyment. The key vector for spreading AIS is motorboats. Lake George has been trying to control Eurasian watermilfoil (myriophyllum spicatum) since the 1980s and undertook an enormous project to try and control the spread of the Asian clam (Corbicula fluminea). There are three other known AIS in Lake George and there are dozens in Lake Champlain.

Prevention is a more successful long-term strategy than direct management when dealing with an invasive species because it’s very difficult to eradicate AIS once established in a water body. It’s far cheaper to focus efforts on interdiction and prevention than direct management. It’s also much better for the ecological health of a water body to prevent an AIS infestation, rather than try and remove AIS once established.

One of the best programs for mandatory boat inspection and decontamination to prevent AIS is in effect for Lake George. Started in 2014, this highly successful boat control program shows that an effective interdiction and prevention program can be administered for a large, popular and complicated lake. No new AIS infestations have been found since the start of this program. Protect the Adirondacks believes that the Lake George program is a model for the Adirondack Park.

Lake George has been infested with AIS since the mid-1980s with Eurasian water milfoil (myriophyllum spicatum) and curly leaf pondweed (Potamogeton crispus). In 1999, zebra mussels (Dreisenna polymorpha) were found. In 2010, Asian clams were found and in 2012 and spiny water flea (Bythotrephes longimanus) was also discovered. With the exception of spiny water flea, all other AIS in Lake George are under active management. Millions of dollars have been spent in Lake George for AIS management. Recent infestations occurred when there was a voluntary boat control program in operation at major boat launches around the lake. There have been no new infestations since the mandatory boat control program was established. 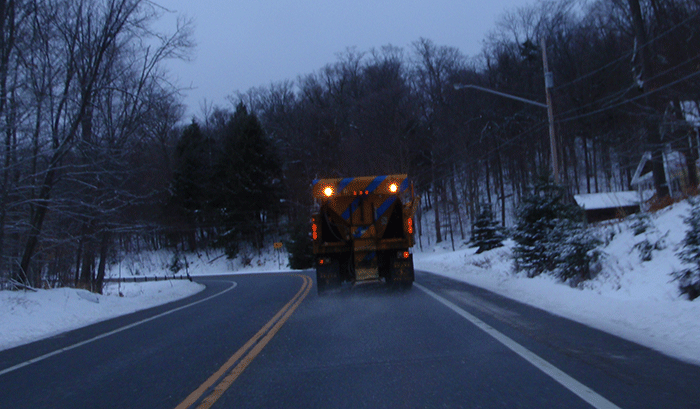 Thousands of tons of road salt are spread on Adirondack roads each winter. The salt washes directly into streams and lakes, or soils, where it is stockpiled. High levels of road salt raise serious threats from long-term impairments to the health and ecology,ogy of lakes and ponds in the Adirondack Park.

At a regional scale, salted roads are hydrologically connected to 77% of the surface water in the Adirondack Park. Recent research has highlighted that road salt application has significantly elevated the concentrations of sodium and chloride in Adirondack lakes, and that the extent of concentration increase is directly proportional to the density of state roads within the watershed. Road salt pollution is a major threat to the long-term health of Adirondack lakes and ponds.

The issue of reducing or eliminating road salt pollution is a challenging one for state and local officials. Winter is six months long in the Adirondacks and many people depend on clear roads for commuting long distances or for winter tourism. The tasks of changing practices and finding alternatives that lessen road salt pollution remains a key challenge for many across the Adirondack Park. 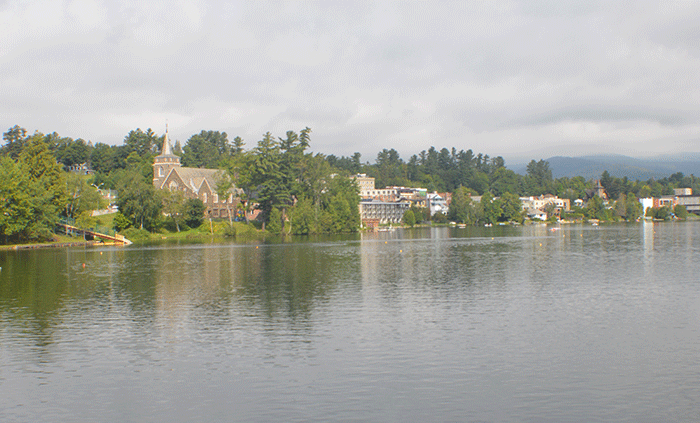 Stormwater pollution is one of the leading threats to water quality across the Adirondacks, where historically many communities were built along the shores of major lakes. Stronger state and local laws are needed to protect lakes and ponds from stormwater pollution.

Stormwater and nutrient pollution: The chief problem facing many other lakes and ponds throughout the Adirondack Park is stormwater pollution from a variety of residential, commercial and municipal sources. Across the Adirondacks many communities developed along the shores of lakes and ponds, as these were the historic transportation corridors. Roads often followed rivers through valleys. In recent decades lakeshores have seen steadily more intensifying development with ever larger homes, extensive driveways and secondary buildings, expansive green lawns highly maintained with fertilizers and pesticides, and all done with often completely inadequate stormwater controls.

Today, the intensity of development on the shores and uplands of many of the Adirondack Park’s biggest and grandest lakes is causing a slow, steady decline in water quality. Reversing this downward trend is a major challenge for those who look at what stewardship of our natural resources of the Adirondacks really means or look at what making this place some kind of model of sustainability really means.

Septic system regulation reform: New York State lags far behind most of the rest of the U.S. in the management of onsite wastewater treatment  systems (OWTS), commonly known as septic systems. Faulty septic systems are leading source of nutrient loading and pollution in Adirondack lakes. In New York regulation of septic system occurs when a system is constructed but there is no mechanism to assess the viability of old systems that have been in use for years. This is the case in the Adirondacks where many seasonal camps and year-round dwellings have been upgraded and expanded but the OWTS has remained the same.

Protect the Adirondacks is advocating for a reform of New York State laws to require a septic system inspection at the time of property transfer to ensure that the system is adequate and functional. A system should also be upgraded when a building is expanded.

If you believe in protecting Adirondack waters you should sign up today as a member of Protect the Adirondacks!