The defense and protection of the 2.6-million-acre public Forest Preserve in the Adirondack Park is at the heart of the work of Protect the Adirondacks.

The heart of Article 14, Section 1 reads:

“The lands of the state, now owned or hereafter acquired, constituting the forest preserve as now fixed by law, shall be forever kept as wild forest lands. They shall not be leased, sold or exchanged, or be taken by any corporation, public or private, nor shall the timber thereon be sold, removed or destroyed.” This wording has not changed since its adoption by the Constitutional Convention of 1894.

The Forest Preserve is managed under the provisions of the Adirondack Park State Land Master Plan, which sets out guidelines to manage natural resource protection and public use. There are six different classifications for the Forest Preserve in the Adirondack Park, but most of the land is classified either as Wilderness, where only human-powered activities are allowed such as hiking, canoeing, cross-country skiing, mountain climbing, and camping, or as Wild Forest, which allows bicycle riding and use of motor vehicles in designated roads and snowmobiles on designated trails.  Other Forest Preserve classifications include Canoe Area, Primitive and Intensive Use, which covers dozens of state campgrounds throughout the Adirondacks, and Historic, which includes areas like Great Camp Santanoni.

The management of the Forest Preserve, the people’s lands, should be a public and transparent process. Too often decisions are made in secret and without any factual basis. Protect the Adirondacks advocates to include the public in the decisions and management of the Forest Preserve. Protect the Adirondacks works hard to make our advocacy objectives very clear to governmental bodies and the public. We believe that our positions lead to the best outcomes for the Forest Preserve and we work hard make sure that our views are well known. We advocate for the same thing in public forums as we do in private meetings. We advocate for the same thing regardless of our audience.

Protect the Adirondacks uses a variety of tactics in our work to defend the “forever wild” Forest Preserve. We’re a watchdog over state management and decision making. We advocate for land protection to protect the Park’s natural resources and enhance public recreational experiences. We undertake various fieldwork projects and investigations to document actual conditions in the Forest Preserve. We advocate and campaign to improve management and funding for the Forest Preserve. And, when all other efforts have failed, and governmental bodies break the law, we go to court.

Watchdog and Policy Review: Each year new proposals are made for management of the Forest Preserve in the Adirondack Park. These involve major public hearings and public comments periods for decisions such as the classification of newly acquired Forest Preserve lands, which is important because how a tract of Forest Preserve is classified, such as Wilderness or Wild Forest, determines the types of uses (non-motorized or motorized) that can occur. The development and approval of Unit Management Plans (UMPs) is something that regularly occurs in the Adirondacks. A UMP is a plan that sets forth how a tract of Forest Preserve will be managed for where trails and campsites are placed, where parking lots and trailheads are located, and for the types of uses that are allowed. Forest Preserve classifications and UMPs require public hearings and public comments. Protect the Adirondacks reviews these proposals and works to organize public comments.

In recent years Protect the Adirondacks has taken positions on and worked to bring in public comments on to oppose a proposed amendment to the Blue Ridge Wilderness UMP, where we opposed locating a new snowmobile trail. We worked on amendments to the High Peaks Wilderness and Vanderwhacker Mountain Wild Forest UMPs, which both focused on public access to the Boreas Ponds. For these amendments we focused comments on trail and public access facilities and new monitoring systems to assess public use impacts. 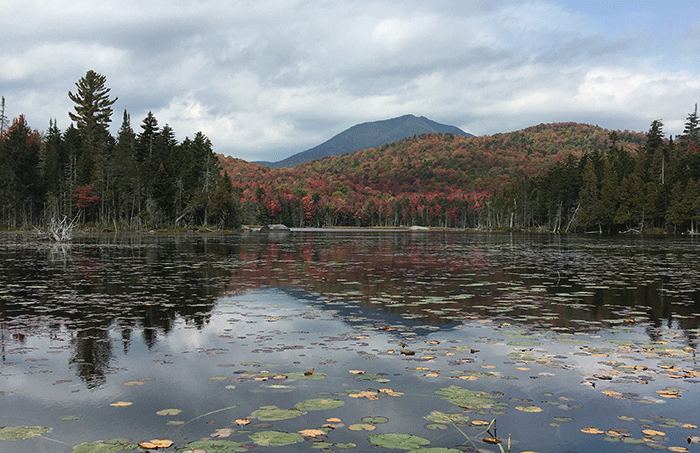 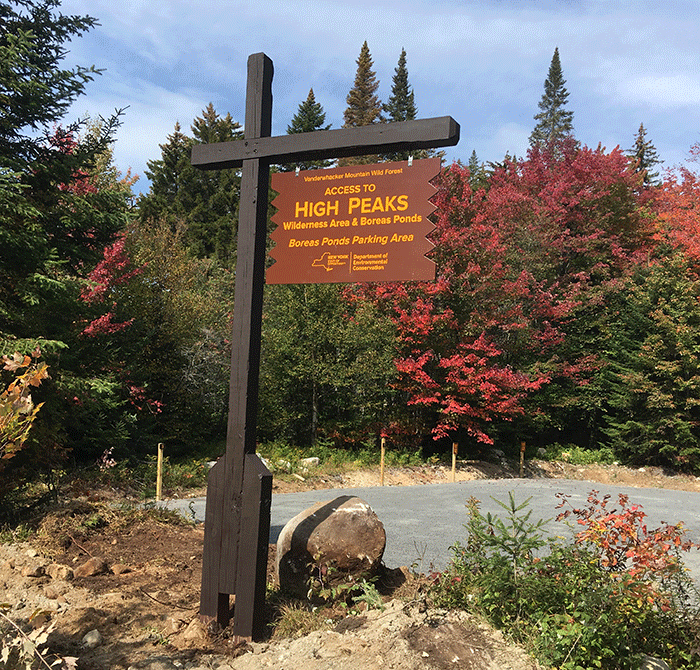 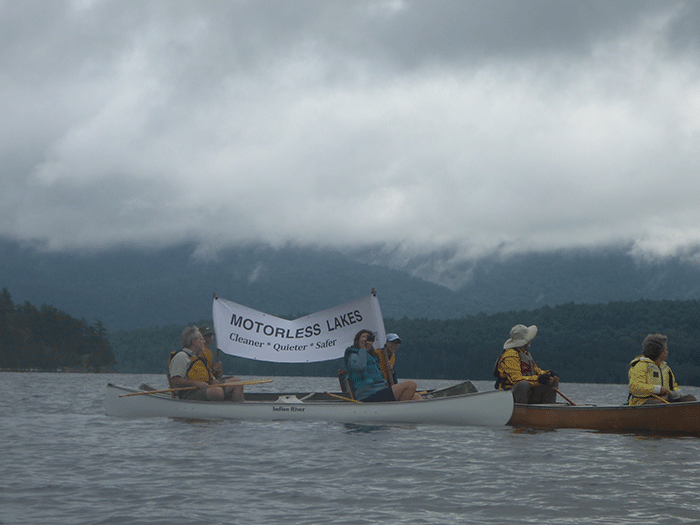 Fieldwork and Investigations: A key part of the work of Protect the Adirondacks to defend the public Forest Preserve is fieldwork and investigations into public policy. We regularly get out into the field to catalogue problems facing the Forest Preserve from public overuse of an area or trail or due to lack of maintenance and investment by public agencies and the State or New York. In recent years, we have worked to document and showcase the state of trails in the High Peaks Wilderness, reported on illegal trespass and abuse by All Terrain Vehicles, detailed motorless waters opportunities and advocated successfully for Boreas Ponds and the Essex Chain Lakes to be managed as motorless. We have gone into the field to catalogue management actions by state agencies that failed to adhere to long-established policies. Protect the Adirondacks recently reviewed highly questionable actions by the Department of Environmental Conservation to build a new type of horse trail/multiple use trail in the Hammond Pond Wild Forest Area that utilized tons and tons of gravel to build the new trail.

For years, Protect the Adirondacks has also meticulously detailed the problems and failures of new Class II Community Connector Snowmobile Trails on the Forest Preserve. PROTECT’s principal objection has been that the 9-12-foot wide Class II trails are basically roads. These “trails” require a high level of construction that changes the terrain and wild character of the Forest Preserve where they are built. These trails are graded, flattened, and widened with heavy machinery, rocks are removed, trees are cut down, all understory vegetation is removed, oversized bridges are built, gravel is used on the bed of the trail, bench cuts are regularly made into side slopes, and bedrock is removed. This is all work that goes well beyond what is required for the construction of a foot trail or even a lesser snowmobile trail. 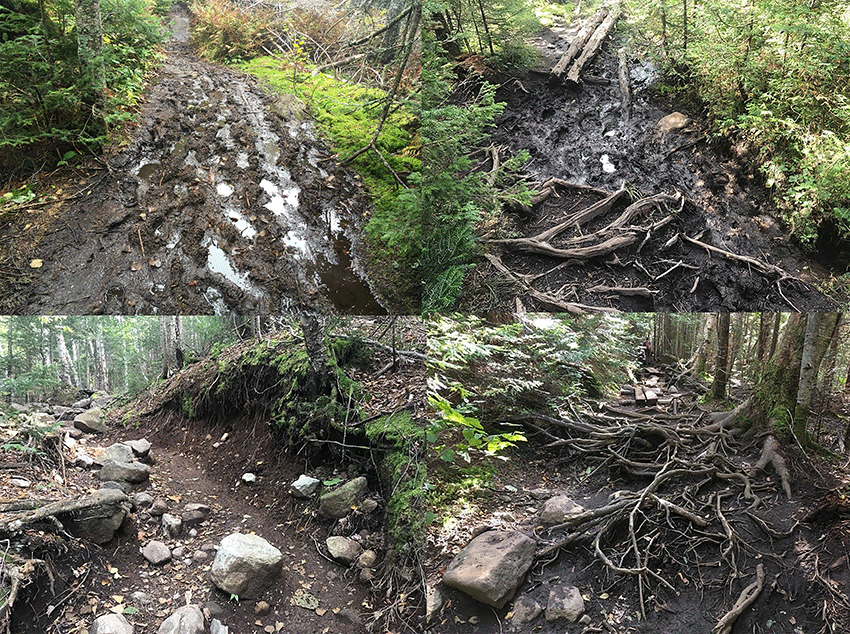 Protect the Adirondacks is advocating for sustainable trails in the High Peaks Wilderness area. The existing trail system, like the trails pictured above, has been in use since just after the Civil War and is poorly planned and maintained. A sustainable trail system will enhance protections for the High Peaks and provide a better and safer public recreational experience. Protect the Adirondacks has worked to document the disrepair and poor conditions of hiking trails in the High Peaks Wilderness Area.

Protect the Adirondacks is committed to expanding the public Forest Preserve.

Legal Action: Protect the Adirondacks is currently engaged in a 6-year lawsuit with the Department of Environmental Conservation and the Adirondack Park Agency where we alleged major violations of Article 14 in the construction of over 30 miles of new road-like Class II Community Connector Snowmobile Trails. These trails were the beginning of a new network of over 250 miles of new motorized trails. Every mile of new Class II trail saw over 1 acre of land cleared and nearly 1,000 trees of all sizes destroyed. These trails are graded and flattened with heavy machinery and are often planted with grass because the forest understory has been destroyed (see above). Class II trails are fundamentally different from all other trails in the Forest Preserve. The Class II trail network marked the largest expansion of motorized uses in the 125 year history of the Forest Preserve. This lawsuit has been a major effort by Protect the Adirondacks. We won an injunction to stop trail construction in 2016, went to trial in 2017, received an adverse ruling by the trial judge in 2017, and won on appeal in 2019. We’re now defending the part of the lawsuit that we won and appealing on one count that we lost at the NYS Court of Appeals, the state’s highest court. This is a complex case; read about Article 14 and word “timber” here. The decision in this case will have a long-term impact on the management of the Forest Preserve.

Protect the Adirondacks undertakes legal action only as a last resort when all others efforts have failed to convince state agencies or other governmental bodies to obey the law.

If you believe in a strong defense of the public Forest Preserve, we encourage you to join with us as a member today! Click here to sign up.