Among Adirondack Park leaders, blaming the Park, the Forest Preserve, environmental protections, and environmental groups, is fashionable. Population trends are often cited, along with things like school district trends, to substantiate this narrative. Hardly ever do local leaders attempt to place Adirondack population or school district trends in a statewide or national context.

The US Census allows us to assess what’s going on in the Adirondack Park in a statewide and national context. The US Census just released its first cut of the 2020 decennial census. This data is very informative, though we’ll know more in late September when town-level data is released, and we’ll learn even more in 2022 when age and race data along with economic data is released.

The limited US Census data released tells us a few things that are important for the Adirondack Park and New York State. New York State gained over 800,000 new residents from 2010 to 2020. The actual 2020 Census count was substantially higher than the annual estimates by nearly 750,000 people, which was a pretty big discrepancy.

The number of counties that saw population declines from 2010 to 2020 rose dramatically from prior censuses. For the 2020 US Census it appears that 1,660 counties saw population losses, compared with 1,082 counties across the U.S. that saw losses from 2000 to 2010. That’s a huge increase in areas of the country experiencing population loss.

The initial 2020 US Census county maps for the country tells this story (see below). Much more data will come out in the next two months that will tell us a lot more about raw population gains or losses at the town level and among rural and metropolitan counties. Once the full suite of age, sex and race data becomes available in 2022 that will provide Adirondack Park leaders with much more accurate information to assess long-term trends locally and regionally across the Adirondacks and compare how we stack up against other rural areas in the Northeast U.S. as well as the whole country. Most importantly we’ll be able to determine who it is that is coming to or leaving Adirondack communities. 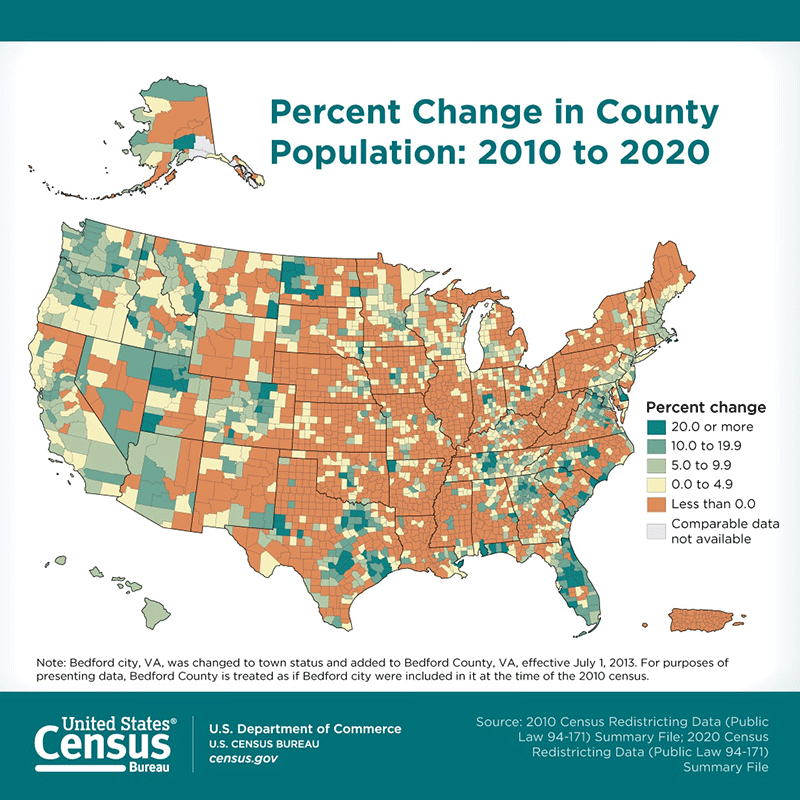 For those who are busy crafting population recruitment strategies for the Adirondacks and North Country, the competition from other rural areas is growing in a big way. In my count of the initial US Census maps, there were at least 1,655 counties outside the Adirondacks that lost population from 2010 to 2020. That means there a lot of small towns, lots of counties, and lots of regions around the U.S. that are looking at many different ways to try and attract and recruit new residents. When it comes to population recruitment, Rural America is all singing the same song.

Across the Northern Forest, which stretches from Tug Hill in New York to northern Maine, most of the counties that are similar to the Adirondacks lost population. All seven of the northern Maine counties lost population, totaling a loss of over 12,000 people between them, though some counties saw minor losses. In New Hampshire, Coos County in the far north lost over 1,700 people, and in Vermont the three counties in the Northeast Kingdom, combined for a loss of over 1,200 people. By contrast, Cumberland County in Maine, home to the City of Portland, gained over 21,000 new residents. Hillsborough County in New Hampshire, home to the City of Manchester, gained over 22,000 people. Chittenden County in Vermont, home to the City of Burlington, gained 11,778 new residents. As we saw in a previous article, Upstate New York counties with larger cities also gained population. 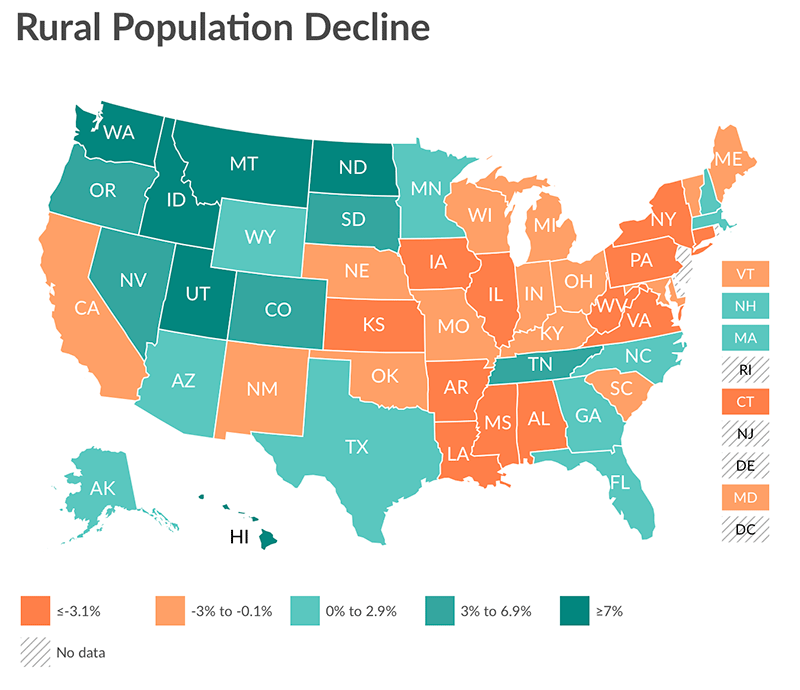 The 2020 Census data was largely gathered at the beginning of the COVID19 outbreak, which as we all remember, began in pockets of the Pacific Northwest and Northeast USA before spreading to the whole country throughout 2020. There’s lots of anecdotal information about the effects of the COVID19 pandemic on the decisions of Americans about where to live, but we do not have a lot of concrete data on permanent changes. While outdoor recreation numbers jumped along with the number of short-term rentals in rural areas in 2020, whether COVID19 has changed school populations or boosted rural populations are open questions.

There are many places across the U.S. that are in the same boat as many Adirondack communities. Our landscape combination of mountains, forests, and abundant water may be unique, but there is nothing unique about the population challenges that we face. It’s simply the reality of Rural America in 2020.

The challenges facing Adirondack communities should be seen as part of a larger trend facing rural areas in the U.S. and not something driven by particular state policies. The Adirondack Park has long suffered from a misdiagnosis of the causes of our population challenges, which has led many to chase false solutions.