This month the Center for Biological Diversity notified the US Fish & Wildlife Service of its intent to sue for protection for the Bicknell’s thrush (Catharus bicknelli) under the federal Endangered Species Act. The Bicknell’s thrush uses the high elevation forests of the northeast as its breeding habitat. 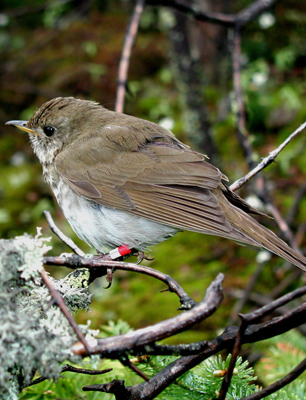 Protect the Adirondacks executive director Peter Bauer had a chance to talk with Mollie Matteson, long-time environmental advocate in the West and Vermont, about her work for Center for Biological Diversity on the future of the Bicknell’s thrush and the Endangered Species Act.

This interview was also published in the Adirondack Almanack.

Bauer: What is the current state of Bicknell’s thrush in the northeast US?

Matteson: The Bicknell’s thrush is endemic to the Northeast and eastern Canada. It nests nowhere else in the world. It is considered to be one of the most vulnerable songbirds in North America, because of its limited and fragmented habitat, its relatively low numbers, and the numerous threats it faces, most prominent of which is climate change. Annual declines of 7-19 percent have been documented in recent years, in different parts of the thrush’s range. Shifting climatic regimes are probably already responsible for the disappearance of the species from more marginal parts of its range, such as the Berkshires, and some mountaintops in the Catskills.

What would protection under the endangered species act mean for the Bicknell’s thrush?

With endangered species listing, the thrush would gain powerful federal protections from harm, including not only direct killing or harassment, but also harm to its habitat. The government would develop a recovery plan for the species. Critical habitat would be designated and protected. Likely more money would be available for research and conservation measures for the species. Federal actions that might harm the species would be subject to review via a consultation process with the US Fish & Wildlife Service.

Why do you think that the US Fish & Wildlife Service is dragging its feet on the question of Bicknell’s thrush protection in the northeast?

I don’t know the answer for sure, but I’m aware that several forces are at work. First, from a big picture perspective, our society, and our government by extension, does not generally prioritize protecting other species and their habitats â€” if we truly did, there wouldn’t be so many species in trouble. As a reflection of our priorities and who holds power in our society, programs like endangered species protection are always underfunded. So, the US Fish & Wildlife Service will say, with regard to a late petition, that they don’t have the resources and staff to process it. They will often blame groups like the Center for filing listing petitions that they then claim they can’t keep up with.

However, what is actually happening is that we are compelling them to follow the law and protect species, which is their job, but all too often falls between the cracks unless there is outside intervention. We need to straighten out our priorities as a society and allocate more government resources to actions that protect a healthy environment for all, and not use our tax dollars for actions that are a direct threat to the well being of our environment, including climate.

The other possibility is that listing a species is usually controversial and federal agencies avoid controversy like the plague. The Bicknell’s thrush is threatened first and foremost by climate change, and what issue could be bigger and more contentious than that? In addition, the thrush is at risk from acid deposition, mercury accumulation, and industrial development of mountaintops. For the US Fish & Wildlife Service to genuinely take on those threats will mean confronting big economic and political interests. That’s not very appealing to most government employees and definitely not to political appointees.

Where else in the US has the Center for Biological Diversity been successful in getting species list under the Endangered Species Act?

We’ve gotten species listed in every state and territory. There has been a strong focus on the western states including Hawaii and Alaska, but quite a few in the East as well. We’re somewhere around 400 species total.

Where has the Center for Biological Diversity tried and failed to get a species listed?

There have been quite a few species that we have petitioned for, but have not yet been listed. Many have waited years in a kind of purgatory, with no action and no decision one way or the other from the federal government. We have filed Endangered Species Act lawsuits, like the one for the Bicknell’s thrush, to compel the government to follow legally required schedules for responses to petitions. Two years ago, we gained a major, historic settlement with the US Fish & Wildlife Service to start working through the backlog of hundreds of species that had been petitioned, but where no decision had yet been reached for them.

We have had species turned down for listing. A recent example is the dunes sagebrush lizard, which lives in New Mexico and is threatened by oil and gas drilling and livestock grazing. Why petitions are turned down, is complicated. Some of the reasons are valid, others not. The review process for a petition can spur additional private and federal research (that probably wouldn’t have happened otherwise) and sometimes the result is a taxonomic update that determines the taxon is not a valid species. Sometimes a review process results in new populations found and a determination that the species is less threatened than previously known. Sometimes the agency bows to political pressure and refuses to list even though the species is endangered. Sometimes landowner’s agree to protect the species, removing the threat of extinction.

Without Endangered Species Act protection, what do you see as the future viability of the Bicknell’s thrush?

Much depends on whether climate change is effectively addressed by our nation, and by the world. If climate change were not an issue, other threats would still be problematic (such as deforestation in the bird’s wintering ground), but they are relatively easier to deal with. It is important to note that right now, the Obama administration has a policy that blocks any action to regulate greenhouse gas emissions â€” the primary cause of climate change â€” under the Endangered Species Act. This was an illegal rule first put in place under the Bush administration for the polar bear. Unfortunately, the Obama administration chose to reinstate this destructive policy, which the Center continues to fight. Without the ability to address climate change as the leading threat to species like the polar bear, Bicknell’s thrush, and many others, the protective power of the Endangered Species Act for these species is greatly diminished. Of course, that was the intention behind the Bush rule, now Obama’s rule. Whether people care a whit about the thrush or not, however, one would hope they care about climate change, which threatens not just Arctic creatures, or high-elevation wildlife, but humanity as well. If the thrush disappears due to climate change, it will be very bad news for us.

If the Center for Biological Diversity is successful in gaining Endangered Species Act protections for the Bicknell’s thrush what do you foresee for the bird’s future in the Northeast?

The listing of the thrush under the Endangered Species Act will be an important first step. However, the full potential of listing will not be realized without getting back the ability to use the Endangered Species Act to address greenhouse gas emissions, or otherwise finding a way for our country to confront our collective addiction to growth and fossil fuel energy. Every significant step we can take toward that is going to increase the chances the thrush will be around, and thriving, a hundred years from now.

Mollie Matteson is a wildlife biologist and advocate. Since 2007, she has worked for the Center for Biological Diversity out of its Richmond, Vermont office, focusing on imperiled species and the habitats they need to survive and thrive in the Northeast. She was raised in southern Vermont, spent 20 years wandering wild western places and working on environmental issues in Montana and Oregon, before returning to the Northern Appalachian region. The Adirondack Park is one of her favorite places on Earth.