The 2018 population estimates by US Census are out, which look at changes in the last decade since 2010. The Census reports that New York’s population in these years is estimated to have grown by around 142,000 people. However, this growth has not been uniform throughout state..

Across Upstate the story was different. The 53 counties of Upstate New York saw a collective loss of over 108,000 people. Just 7 of the 53 Upstate counties saw gains in population from 2010 to 2018. The three Capital District counties of Albany, Schenectady and Rensselaer saw a total gain over 3,600 people, with the lion’s share going to Albany County. Erie County (Buffalo) added almost 600 people, Ontario County, south of Rochester, added 1,700, and Tompkins (Ithaca) added 1,000. Saratoga County was in a league all of its own in Upstate New York in the last decade, adding more than 10,000 new residents.

These trends have intensified in the last decade, in the wake of the Great Recession, where new employment and population have overwhelmingly shifted to urban/metropolitan areas. There are fewer jobs today in Rural America that there were in 2007, whereas urban/metropolitan areas have added over 10 million new jobs to their 2007 levels. 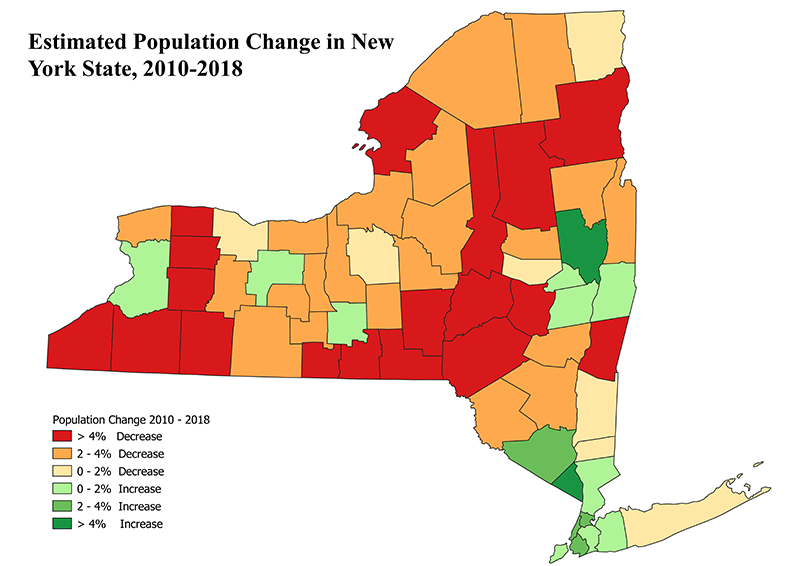 This map shows areas in New York State that were estimated by the US Census to have gained or lost population from 2010 to 2018.

From 1990 to 2018, the 12 Adirondack Park counties saw a net gain of 20,710 people. The areas that saw changes mirrored national trends. Oneida County lost over 21,000 and Clinton County saw a drop of over 5,400. Both were likely heavily influenced by closures or significant changes of large military bases. Herkimer and St. Lawrence counties saw long-term losses of over 4,000 each, driven possibly by changes in agricultural production and rural manufacturing. Over that 28-year period, Saratoga picked up almost 48,000 new residents, while Warren, Washington and Franklin also posted significant gains. Saratoga County saw the greatest growth in Upstate.

It’s highly likely that the trends since the Great Recession, staring in 2008, of mild population losses throughout much of Upstate and significant population gains in Downstate New York will persist. These trends in New York mirror larger national trends of shrinking rural populations and growing urban/metropolitan areas.

As mentioned earlier in this article, about half of all counties in Rural America are experiencing population declines. That means that there are enormous areas in the U.S. where rural communities are planning and strategizing about how to reverse these trends locally and recruit new residents. In the Adirondacks, these efforts are waged against a backdrop of long-term population stagnation and short-term population losses in Upstate New York.