The NYS Adirondack Park Agency (APA) today released a draft permit for the controversial new granite quarry mine in White Lake in the western Adirondack Park in the Town of Forestport, Oneida County. Area residents and property owners widely oppose this project. Protect the Adirondacks has long partnered with White Lake area lake associations for water quality monitoring. We have been contacted by a number of area residents and landowners near the proposed mine and around White Lake, who have many concerns about the disruptive impacts of a new industrial facility in a primarily residential and tourist resort area.

The new White Lake Granite Quarry is completely out of character with the area’s local residential and tourism economy. This large-scale industrial facility will disrupt the local quality of life and poses environmental threats. The APA review did not consider a number of factors. This project should be further scrutinized through a formal adjudicatory public hearing. The criteria for a public hearing was more than satisfied through public comments.

The proposed new White Lake Granite Quarry project is on a largely forested 56-acre tract on Stone Quarry Road, south of Route 28. Around 27 acres of this site will be actively mined over the life of the proposed new mine. The site has not been a functioning mine for decades. The site has not been an active quarry for nearly 90 years, while there has been significant residential and small business development around the area’s lakes.

The project will open large pits in an 8.8-acre area with 40-foot-high walls. Bedrock will be removed and topsoil stockpiled. Crushing will occur on-site. Large granite “bricks” will be cut using “diamond wire saws” and then loaded on trucks, which will run up to 20 loads per day. Blasting will be necessary to break apart or break open the bedrock for mining operations. The mine will operate April 1 through October 31, Monday-Friday, 7am-6pm and 7am-12pm on Saturdays.

Area residents are concerned about noise from mining operations, noise from blasting, truck traffic, fugitive dust, and water quality impacts. The long hours and weekend mining will also be disruptive to the local quality of life in the area.

For a variety of reasons, this project is widely opposed because it is unsuitable for the residential White Lake area. We believe that the lands in question should be used for residential purposes or sustainable forest management. 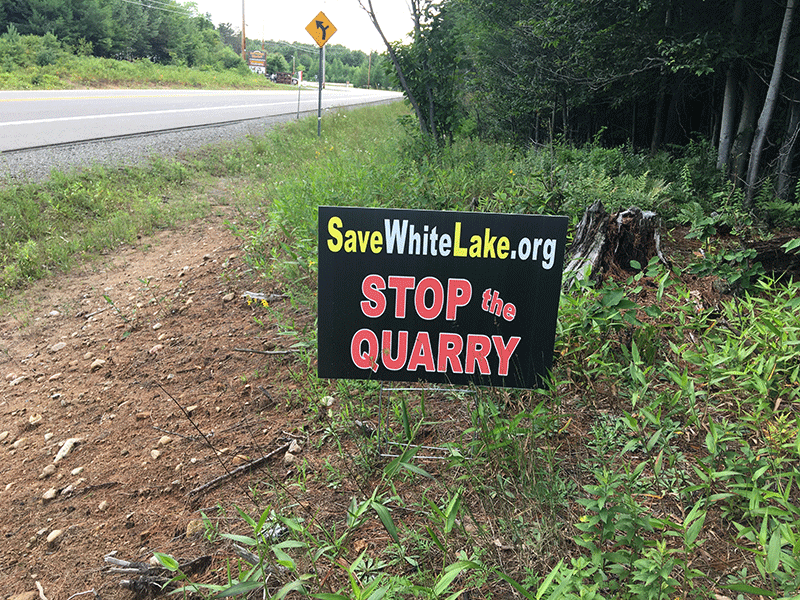 1. “The size and/or complexity of the project, whether measured by cost, area, effect upon municipalities, or uniqueness of resources likely to be affected.” This project is an industrial operation in a residential area where greater scrutiny is needed for potential negative impacts on the water quality, forests and open space, residential quality of life, and local tourism/resort economy. There are serious gaps in the application about noise and traffic impacts that merit additional studies and scrutiny that at this point can only be accomplished through an adjudicatory hearing.

2. “The degree of public interest in the project, as evidenced by communication from the general public, governmental officials or private organizations.” Hundreds of public comments from neighboring residents throughout the White Lake area more than satisfy these criteria. Beyond the sheer numbers, the concerned citizen population in the general White Lake area also invested in an independent mining consultant to review application materials as well as legal representation.

During APA discussion of public hearings, APA staff has dismissed projects where hundreds of letters have come in as insignificant, comparing comments on Forest Preserve projects where tens of thousands of comments are made. This is a false choice as Forest Preserve projects require statewide hearing. By any rational standard “the degree of public interest in this project” has been more than satisfied.

3. “The presence of significant issues relating to the criteria for approval of the project.” Independent analysis on five significant issues relating to the approval of this project including impacts to the hydrology of White Lake, noise from blasting/mining operations, traffic study/safety, particulate matter/dust, and impacts on the local residential quality of life and tourism/resort economy were submitted to the APA and merit independent scrutiny through an adjudicatory public hearing. Independent experts must be allowed to provide information. In addition, the applicant’s experts must be subject to cross-examination. The submission on an independent study by an outside expert shows that the White Lake community is prepared to bring additional information to this project. Though the APA deemed this application to be complete, there are many facts in dispute.

4. “The possibility that the project can only be approved if major modifications are made, or substantial conditions are imposed.” Given other mining projects that have gone to public hearing, such as NYCO Minerals, Inc., where a long list of mitigation measures was adopted in the permit to protect the local environment and rural quality of life, it’s a near certainty that a public hearing for this project would produce a permit substantially different from a permit issued without the benefit of a public hearing. Moreover, the DEC Administrative Law Judges that oversee APA adjudicatory public hearings are required to facilitate mediation if the parties agree.

5. “The possibility that information presented at a public hearing would be of assistance to the agency in its review.” The White Lake community and other organizations have demonstrated the capacity to bring in outside, independent mining expertise to this issue that will assist the APA in its review. The evaluation to date of noise, dust, truck traffic, water quality have not received adequate scrutiny in the APA staff review and additional factual information must be brought to the review of this through the adjudicatory hearing.

6. “The extent of public involvement achieved by other means.” The Town of Forestport Planning Board has tabled this application until the APA makes a final decision. The only meaningful way for the hundreds of concerned local residents and property owners to participate in this project is by intervening in an official adjudicatory public hearing.

The APA can only deny a project if it has gone through an adjudicatory hearing. The APA cannot deny a project like a local planning or zoning board can in New York State. Given the wide range of controversial issues, and the weaknesses of the application with many facts in dispute, the APA’s only other responsible course of action is to send this project to an official adjudicatory public hearing.

The APA can only deny a project if it has gone through an adjudicatory hearing. The APA cannot deny a project like a local planning or zoning board can in New York State. Given the wide range of controversial issues, the APA’s only other responsible course of action is to send this project to an official adjudicatory public hearing.