A group shot of activists from across New York who came to Albany to lobby for stronger protections and state investment in the Adirondack Park.

Restore Mother Nature Bond Act: The Governor has proposed a new $3 billion bond act for a broad range of projects focusing largely on climate change resilience and mitigation, including fish, wildlife, and stream habitat restoration, water quality, flood risk reduction and land protection. It has been 24 years since the last environmental bond act was approved by the voters and environmental protection needs have multiplied greatly since 1996. Past bond acts have funded purchases for the Forest Preserve, conservation easements and recreational facilities. Adirondack groups: 1) Support the Governor’s Bond Act that focuses on climate change, and source water protection; 2) urge that it be made bigger and include specifics for how the bond act will be allocated/spent; and, 3) advocate that at least 25% of the bond act be allocated for land protection across the state. 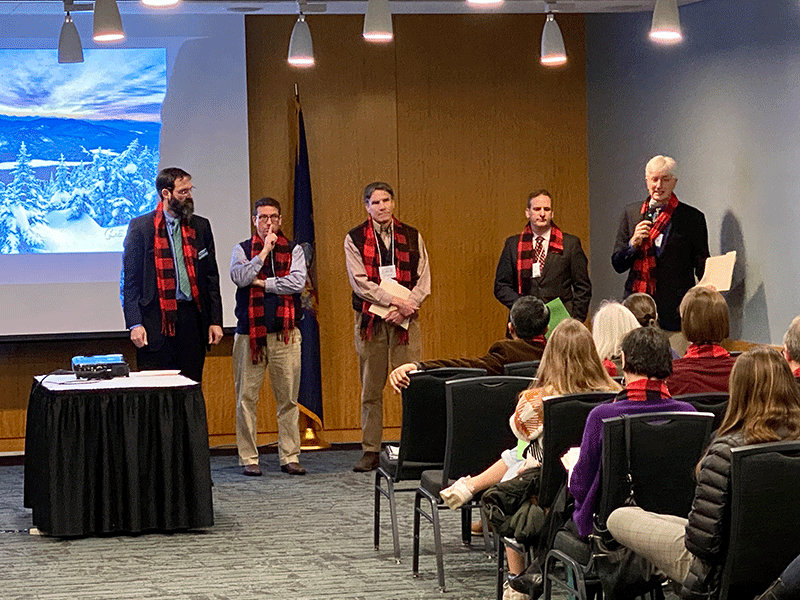 The NYS Environmental Protection Fund: The EPF is again proposed at $300 million. The EPF funds a variety of environmental programs including land protection, invasive species management, state land stewardship, farmland protection, solid waste/recycling programs, and more. Adirondack groups have the following positions: 1) The EPF should be at least $300 million this year, as we work towards $500 million by 2025; 2) the land protection account should be increased above the $30 million proposed by the Governor; 3) there should be no permanent state staff positions funded through the EPF;  and, 4) support the $300,000 to help fund the Paul Smith’s and Newcomb VICs. 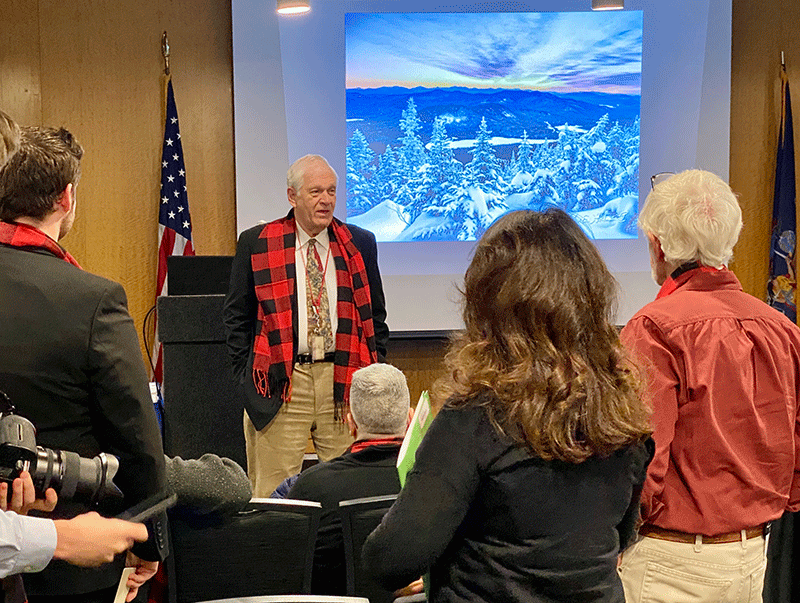 Assemblymember Steve Englebright, chair of the Environmental Conservation Committee, and longtime environmental leader in Albany, runs down the list of environmental issues facing Albany in 2020.

Invasive Species: The EPF invasive species account needs to be increased above $13 million and prioritize education and prevention programs. Eradication grants are prioritized at $6 million in this account. We urge that educational and intervention programs aimed at stopping the spread of invasive species are funded at a level equal to eradication grant programs. In the Adirondack Park we still have many lakes and ponds that remain free from invasive species and these places must be protected. Also, in the Invasive Species account, the Cornell Hemlock Wooly Adelgid project should be increased to $750,000.

State Land Stewardship: The EPF includes a category called “State Lands Stewardship” that funds construction and maintenance of the recreational facilities on the Forest Preserve and conservation easement lands, including trails, lean-tos, parking areas, trailheads, etc. The Governor has proposed increasing EPF spending for land stewardship to $36 million, which includes funds to manage overuse and decrease damage to the High Peaks Wilderness Area. The Adirondack groups support: 1) a State Lands Stewardship account of at least $36 million; 2) $1.2 million for shuttle buses in High Peaks Wilderness; and, 3) designation in the stewardship account of a sub-allocation for the “Forest Preserve” funded at $10 million. 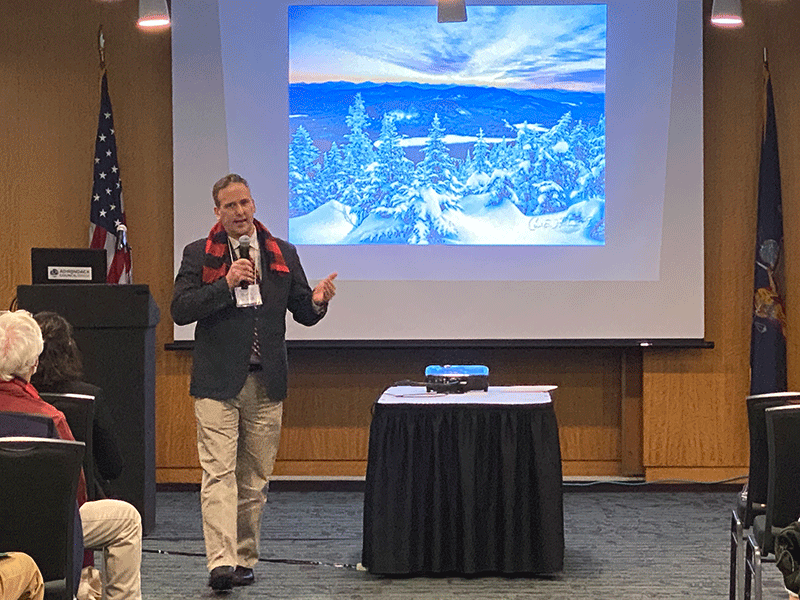 Forest Ranger Staffing: The groups believe it is essential to increase the number of Forest Rangers, Assistant Rangers and backcountry stewards to help meet pressures facing natural resources, wilderness character, public safety, and education resulting from increased use of the High Peaks and other areas. Ranger staffing for the entire state is currently 135 positions. This needs to be expanded to 175 with a special focus on the High Peaks in the Adirondacks. The Forest Rangers have primary responsibility for DEC’s stewardship of five million acres of State-owned land and conservation easements across New York, the vast majority of which is in the Adirondack Park. The average Forest Ranger is responsible for patrolling 53,752 acres, whereas in 1970 it was 28,516 acres. There has been a major increase in public use, and the number of search and rescue missions has increased twofold while the total number of Rangers has remained static.

Conservation Development Legislation A.8123a/S.6484: The greatest threat to Adirondack forests is fragmentation into smaller lots and rural sprawl patterns of development. Legislation sponsored by Assembly Environmental Conservation Committee Steve Englebright (A.8123a) and Senate Environmental Conservation Committee Chair Todd Kaminsky (S.8464) requires that for all large-scale subdivisions proposed in the Adirondack Park, the Adirondack Park Agency (APA) must require ecological data and analysis and conceptual designs which avoid large negative impacts to wildlife, water quality, forest ecosystems, and other resources. This bill mandates development design to cluster buildings, roads and utilities in order to protect large tracts of intact forests. This is the most significant reform of the APA Act in its history and has broad environmental and local government support. Urge legislators to co-sponsor this legislation and pass it this year.

APA Board Leadership: The APA is at the weakest point in its history. The APA Board consists of 11 individuals; three who represent state agencies and 8 who are nominated by the Governor and confirmed by the State Senate to 4-year terms. Of the eight appointed Board members, there are now three vacancies and 4 of the 5 remaining Board members are serving in expired terms. The groups are advocating for professional diversity on the APA Board to include an environmental attorney, scientist, and people with regional planning experience. Urge Senators to support an APA Board with diverse professional experiences and insist that the Governor appoint a full slate to bring the APA Board up to its full capacity.

Strengthen the Invasive Species Transport Law: In 2014, the Invasive Species Transport Bill was passed and authorized for five years. This legislation made it illegal to transport vegetation on boats and trailers across the state or to launch a boat that is not clean, drained and dry. In 2019, this legislation was renewed for 1 year and it now expires in June 2020. The Adirondack groups advocate that this law be strengthened in 2020 with a 5-year renewal that authorizes mandatory boat control programs in different regions of the state. The re-authorization should also include periodic reports to the Legislature on invasive species infestations in New York, with the first report due on January 1, 2022.

Road Salt Reduction Legislation: The Adirondack groups support legislation to create an Adirondack Road Salt Task Force (A.8767/ S. 6824) in order to reduce the tons of road salt used on highways  which run-off to pollute streams, ponds and drinking water wells and cause great damage to roads, bridges and automobiles.  Alternative de-icing solutions must be expanded. This legislation is sponsored by Assemblymember Billy Jones and Senator Betty Little. Urge other legislators to co-sponsor this important legislation and pass it this year.

Tick-borne Diseases are a Major Health Threat in New York: The problem of tick-borne diseases continues to intensify, particularly in the Adirondacks. Blacklegged ticks that spread Lyme disease can now be found in higher elevations where they have not been found in the past, including the Adirondack High Peaks region which is experiencing heavy visitation. Researchers at Paul Smith’s College have found that 85% of all ticks found in the Adirondacks are carrying Lyme, a 200% increase in the prevalence of Lyme during the past decade. Urge legislators to include $1.5 million for public awareness, prevention and treatment of tick-borne diseases in the state budget.