We need you to help us lobby New York State Senators and Assemblymembers to defend and protect the Adirondack Park! There are a range of major issues that need strong public advocacy this year in the Legislature as part of the state budget or pending legislation. Sign up today to join us for the 2nd Adirondack Park Environmental Lobby Day on Thursday and Friday February 25 and 26, 2021. This year due to the COVID19 pandemic the Adirondack Park Lobby Day will be a virtual event where you can join lobbying sessions from the safety and comfort of your own home and meet with legislators and staff. 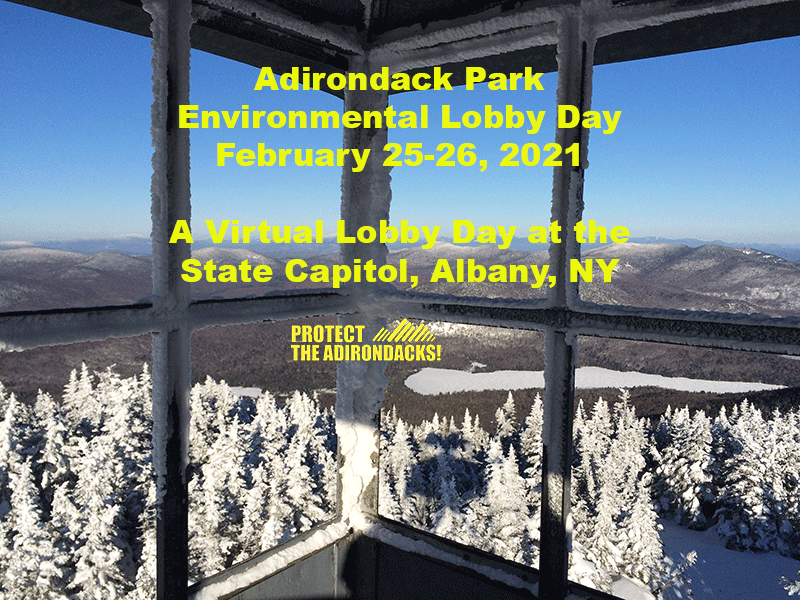 Protect the Adirondacks has joined with a number of other organizations, including Adirondack Wild: Friends of the Forest Preserve, Adirondack Council, and ADK, to organize the Adirondack Environmental Lobby Day at the State Capitol in Albany, February 25-26, 2021.

This is a virtual lobby day. Participants will need to be able to access ZOOM and have a good internet connection to lobby your members of the Legislature. We’re working hard to match up advocates with their legislators and staff to make the case for funding and new protections for the Adirondack Park. There will be a general introduction covering topics such as how to lobby and providing information and answering questions about the agenda of items (see below). There will separate meeting links for each meeting and all participants will be given information about how to access each of their meetings.

We’re working to build a big crowd of activists to help make this virtual lobby day a success and to show the broad support for the Adirondack Park from across New York State.

Thank you very much for your support and activism to protect and defend the Adirondack Park and our “forever wild” Forest Preserve! We look forward to seeing you at the virtual Adirondack Park Environmental Lobby Day on February 25th and 26th.

Or sign up by email at info@protectadks.org. Make sure to give us your phone number.

Once you sign up we will send you information about the virtual Lobby Day with directions and background materials to help you be a successful grassroots lobbyist. Now is the time to make our voices heard. Please sign up today and encourage your friends and family to attend this important day of action advocating for the environmental protection of the Adirondack Park. Please make sure that you know who your State Senator and State Assemblymember is.

We need a loud and proud crowd to stand up for the following list of big issues facing the Adirondacks. Here’s out target list for Adirondack Park priorities for 2021:

The NYS Environmental Protection Fund: The EPF is proposed at $300 million. The EPF funds a variety of environmental programs including land acquisition, invasive species management, state lands stewardship, farmlands protection, solid waste/recycling programs, among much more. On the EPF, the Adirondack groups have the following positions: 1) the State Lands Stewardship account should include an earmark $10 million for Adirondack-Catskill Forest Preserve management; 2) the land protection account should be increased above the $30 million proposed by the Governor; 3) we support the $300,000 to help fund the Paul Smith’s and Newcomb Visitor Interpretive Centers. New potential land protection projects include Whitney Park, the Three Rivers acquisition on the South Branch of the Grasse River, among others. We need to lobby for these spending priorities.

State Land Stewardship: The EPF includes a category called “State Lands Stewardship” that funds construction and maintenance of the recreational infrastructure on the Forest Preserve and conservation easement lands, including trails, lean-tos, parking areas, trailheads, etc. This year the Governor increased EPF spending for land stewardship to $35.665 million, which includes $800,000 “Essex County Overuse” which means the High Peaks Wilderness. These funds may be used to help implement the recommendations of the High Peaks Advisory Committee (HPAG). The groups support funding the State Lands Stewardship account at $35.665 million, but advocating for the $800,000 earmark to be increased to $10 million for Adirondack-Catskill Forest Preserve management. We need to advocate for greater investment in Forest Preserve management.

Invasive Species: The EPF invasive species account needs to be increased above $13 and prioritize education and interdiction programs. Eradication grants are prioritized at $5.75 million in this account. We urge that educational and intervention programs aimed at stopping the spread of invasive species are funded at a level equal to eradication grant programs. In the Adirondack Park we still have many lakes and ponds that remain un-infested with invasive species and these places must be protected. Also, in the Invasive Species account, the Cornell Hemlock Wooly Adelgid project should be increased to $750,000.

Forest Ranger Staffing: The groups believe it is essential to increase the number of Forest Rangers and other personnel, such as assistant Rangers and backcountry stewards, to help meet pressures facing natural resource protection, public safety, and public education from increased use of the High Peaks Wilderness and other areas. Ranger staffing for the entire state is currently around 135 positions. This needs to be expanded to 175 with a special focus on the High Peaks in the Adirondacks. The Forest Rangers have primary responsibility for DEC’s care, custody and control of five million acres of State-owned land and conservation easements across New York, the vast majority of which is in the Adirondack Park. Today the average Forest Ranger is responsible for patrolling 53,752 acres, whereas in 1970 it was 28,516 acres. There has been a major increase in public use, and the number of search and rescue missions has increased twofold.

Reform of the Adirondack Park Agency

Conservation Development Legislation A.4074/S.1145: The greatest threat to Adirondack forests is fragmentation into smaller lots and rural sprawl of widely spaced subdivisions. Legislation sponsored by Assembly Environmental Conservation Committee Steve Englebright (A.4074) and Senate Environmental Conservation Committee Chair Todd Kaminsky (S.1145) requires that for all large-scale subdivisions proposed in the Adirondack Park, the Adirondack Park Agency must organize baseline materials and evaluate the impacts to wildlife, water quality, forest ecosystem health, among other factors. This legislation would require use of conservation development design to cluster the development of buildings, roads and utilities in order to protect large tracts of intact forests. This is the most significant reform of the APA Act in its history. This legislation has broad environmental and local government support. We need to urge legislative leaders to co-sponsor this legislation and support Chairman Englebright and Chairman Kaminsky.

APA Board Leadership: The Adirondack Park Agency is at the weakest point in its history. The APA Board consists of 11 individuals; three who represent state agencies and 8 who are nominated by the Governor and confirmed by the State Senate to 4-year terms. Of the eight appointed Board members, there is now one vacancy and two other seats expire in June 2021. The Governor has consistently nominated board members from among Adirondack local government officials (three on the Board), business (one) and a career employee of the Department of Environmental Conservation (a conflict of interest). The groups are advocating for greater professional diversity on the Board to include more members with broad environmental concerns and experiences. We need to urge Senators to support APA Board members with diverse professional experiences and insist that the Governor appoint a full slate to bring the APA Board up to its full capacity by the end of June.

Strengthen the Invasive Species Transport Law: In 2014, the Invasive Species Transport Bill was passed and was authorized for five years. This legislation made it illegal to transport vegetation on boats and trailers across the state or to launch a boat that is not clean, drained and dry. In 2020, this legislation was renewed for 1 year and it now expires in June 2020. The Adirondack groups are advocating that this law be strengthened in 2021 with a 5-year renewal that authorizes the NYS Department of Environmental Conservation to create mandatory boat control programs in different regions of the state. The re-authorization should also include a biannual report to the Legislature on terrestrial and aquatic invasive species infestations in New York, with the first report due on January 1, 2023.

A Survey of Climate Change and Adirondack Lake Ecosystems

Adirondack Park-wide Water Quality Monitoring: Our groups ask your support for a $6 million/3-year ($2 million annual) appropriation for the proposed Survey of Climate Change and Adirondack Lake Ecosystems.  (SCALE). This research is necessary to assess new threats to Adirondack waters from climate change, mercury contamination, browning, invasive species, harmful algal blooms and salinization. It has been more than 30 years since the last comprehensive undertaken assessment of all major Adirondack waters was completed by the Adirondack Lake Survey Corporation (ALSC), which studied over 3,000 lakes and ponds. New Park-wide research must now assess the impact of these new stressors even as certain lakes and streams continue to recover from the impacts of acid rain.

The SCALE initiative builds upon the 1987 report that analyzed water quality and the effects of acid rain.  Data collected and analyzed by the ALSC has been crucially important for the development of both State and Federal policies on emission control and air transport regulations. Similarly, we anticipate that SCALE research and findings will guide management for decades to come.