After historic Court decision against them, the New York Department of Environmental Protection and Adirondack Park Agency have a big job to get back on the right side of forever wild

The May 4, 2021, decision by the New York Court of Appeals ruled that Class II Community Connector Snowmobile Trails violated Article 14, Section 1, of the New York Constitution. This ruling capped an 8-year legal challenge by Protect the Adirondacks against the Department of Environmental Conservation (DEC) and Adirondack Park Agency (APA). In the end, eight of the twelve judges who looked at the evidence found that Class II trails were unconstitutional.

For two decades, Protect the Adirondacks, its predecessor organizations, and many others, took the position that Class II trails, or anything like them, violated Article 14, Section 1, the forever wild clause of the State Constitution. Few at these state agencies heeded our concerns.

In the wake of this historic decision, Protect the Adirondacks stands ready to work with the DEC and APA to regain their lawful footing as they comply with Article 14 and rebuild their Forest Preserve management programs. 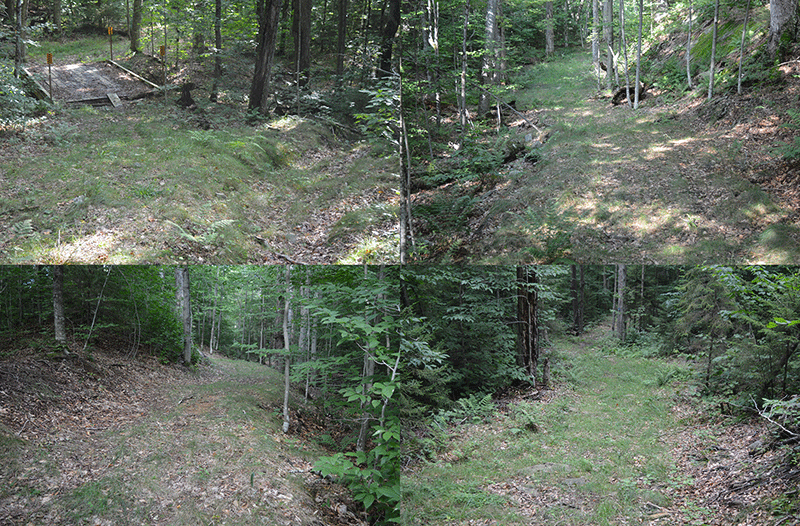 Scenes from the Seventh Lake Mountain Class II Trail in the Moose River Plains Wild Forest Area. This trail is nothing like a foot trail.

The list below details some of the work that DEC and APA must undertake to get back on the right side of forever wild.

Restoration of Damaged Areas: Large stretches of Forest Preserve lands were damaged by the building of more than 20 miles of Class II trails, some of which will never lead anywhere. Many acres of Forest Preserve were damaged during the construction of Class II trails, and these lands must be repaired and reforested. Piles of lumber were stockpiled in these areas, over-sized bridges were built, culverts were put in, bench cuts were cut into miles of hillsides, street-sign-like signs were installed, stumps and boulders were removed, grass was planted in the forest, intact forests were fragmented, and thousands of trees were destroyed. All of this damage must be cleaned up, the damage must be repaired, and the ecology of the forest must be restored to its preexisting condition to the greatest extent possible.

Interim Guidance for Foot Trail Construction and Maintenance: DEC and APA have no existing policy or guidance document for foot trail construction and maintenance. The testimony of DEC staff during the trial revealed that, at most, trail classification is an ad hoc affair, which can vary from Unit Management Plan (UMP) to UMP. To compound matters, ever since the Appellate Division ruled that the Class II trails were unconstitutional, DEC and some conservation organizations have claimed that the decision would make it impossible to build or maintain foot trails on the Forest Preserve. Nothing could be further from the truth, and the Court of Appeals decision made that clear. The Court of Appeals decision recognized that foot trails are different from Class II trails and that foot trails are absolutely permissible on the Forest Preserve.

In many ways, the new Protect decision can be read as a historic affirmation for foot trail construction and maintenance on the Forest Preserve. Despite this, DEC has not issued any guidance on the implementation of the Court’s decision, leaving trail maintenance crews in limbo. DEC must clear the air as soon as possible so that crucial foot trail work can continue, in conformity with Article 14.

Revision of DEC Tree Cutting Policy: The trial and all three resulting court decisions settled the meaning of the word “timber” in Article 14 and the legal status of small-diameter trees on the public Forest Preserve. Timber means all trees, not just large trees said to have merchantable value, and so Article 14, Section 1, protects all trees on the Forest Preserve. The court record is clear that the first 27 to 34 miles of Class II trails destroyed over 25,000 trees 1” DBH and greater.

The trial revealed that the DEC policy on tree cutting on the Forest Preserve (LF-91-2) was not based on science. The court decisions show that this policy needs to be revised. The courts were clear that trees of 1” DBH or greater must be both counted and protected during state management activities on the Forest Preserve. LF-91-2 needs to be revised and brought into alignment with the decisions by the courts. In addition to covering all trees 1” DBH and above, it must assign clear responsibility for a determination as to whether each proposed tree cutting action on the Forest Preserve complies with the Constitution.

As showed in the vast court record used in this decision, Class II trails required cutting of upwards of 1,000 trees 1” DBH or greater per mile to clear trails that were 9-12 feet wide or wider when bench cuts were used. Class II trails saw the clearing of one acre of forest per mile of trail. The Protect decision upheld hiking trails as a legitimate, lawful use of the Forest Preserve. There are simply no sustainable hiking trails that during planning and construction required the cutting of a thousand trees 1” DBH or larger per mile or required the clearing of one acre of forest for each mile of trail.

The Guidance says that “Limited leveling and grading may be undertaken,” yet Class II trails were graded with heavy machinery from end to end. The Guidance also stated that “the need for bench cuts will be minimized,” but the actual trail work saw a nearly continuous use of bench cuts that ran for hundreds of yards at a time, section after section, on Class II trails, where the cleared areas regularly reached 15 to 20 feet in width. The Guidance failed to prevent damage to and degradation of the Forest Preserve.

Revision of Wild Forest Unit Management Plans: There are numerous UMPs for Wild Forest Areas that authorize the construction of Class II trails. These UMPs need to be revised to delete the trails that are no longer viable. 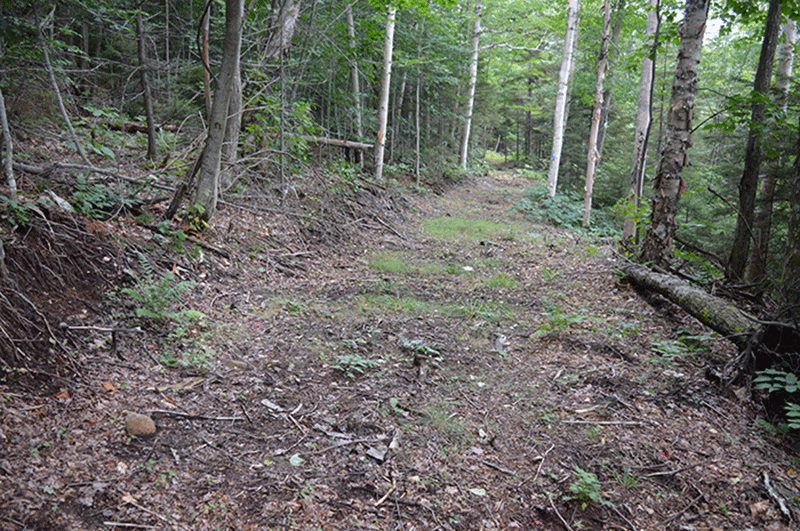 A section of a Class II trail with a long bench cut running along the left side. Such bench cuts are regular features on Class II trails and widen trails to 15-20 feet.

Revision of 2006 Adirondack Park Snowmobile Plan: The 2006 Snowmobile Plan for the Adirondack Park, produced by the DEC and the Office of Parks, Recreation, and Historic Preservation (OPRHP), is no longer relevant. While the goal of building community connector snowmobile trails may still exist, the use of the Forest Preserve to make connections requiring long stretches of wide new trails is no longer a viable option. The DEC and OPRHP need to revoke the approval of the current plan, and revise it, if such a plan is to continue to exist.

Revision of the Adirondack Park State Land Master Plan: The Adirondack Park State Land Master Plan (APSLMP) defines a snowmobile trail as “a marked trail of essentially the same character as a foot trail” and mandates that it be “compatible with the wild forest character of an area.” Though Protect the Adirondacks, and others, pointed out to the DEC and APA for years that Class II trails were nothing like foot trails, both agencies persisted with that fallacy.

The courts fully recognized these differences. The State Supreme Court decision stated, “It is clear to the Court from the evidence presented that the trails at issue herein do not share the identical essential characteristics of foot trails or forest roads, but rather fall somewhere between the two.”

The Court of Appeals wrote: “Further, the Class II trails require greater interference with the natural development of the Forest Preserve than is necessary to accommodate hikers. Their construction is based on the travel path and speed of a motorized vehicle used solely during the snow season. The trails may not be built like roads for automobiles or trucks, but neither are they constructed as typical hiking trails.”

To prevent such misreads in the future, the APSLMP should be revised to integrate an analysis of consistency with Article 14 into the approval process for UMPs and other planning documents for the Forest Preserve. The APSLMP must also be revised to better define snowmobile trails, so as to make the definition more enforceable.

Protect the Adirondacks urges DEC and APA to embrace reform of their Forest Preserve management and to undertake these reforms in an honest, transparent process, with their doors open to everybody.