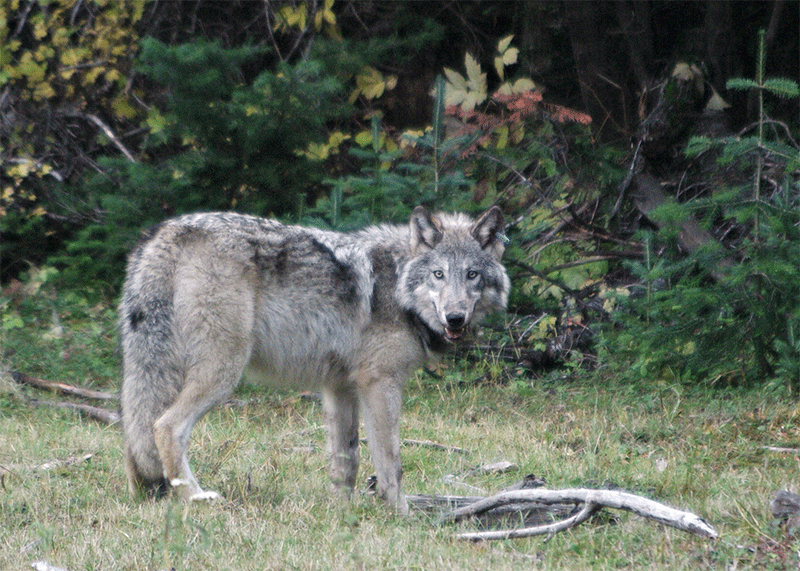 On September 21, 2022, after a second independent DNA study confirmed that the wolf killed outside of Cooperstown, New York, was really a wolf, the NYS Department of Environmental Conservation (DEC) reversed course and announced that the wolf was indeed a wolf. DEC had been calling the Cooperstown wolf a coyote since it examined the dead animal in December 2021 and conducted a DNA study in early 2022. DEC publicly called the wolf a coyote in July in many news reports, after the release of an independent DNA study by Trent University in Canada, organized by the Northeast Ecological Recovery Society (NERS). The Trent University DNA analysis found that the Cooperstown wolf had 98% wolf genes.

In July, the DEC cited its own DNA study as proof that the wolf was a coyote. The DEC used this DNA study in its press comments at the time. Mike Lynch at the Adirondack Explorer reported in July that the DEC had a DNA analysis by the Wildlife Genetics Institute at East Stroudsburg University in Pennsylvania that showed the Cooperstown wolf was “closely identified as an Eastern coyote, with a mix of coyote, wolf, and dog genetics.” WTEN News 10 in Albany reported that a quote from Lori Severino, a DEC spokesperson, saying “Initial DNA analysis conducted determined the wild canid to be most closely identified as an eastern coyote.”

In July, the DEC refused to release its DNA study to the public. Protect the Adirondacks, and other groups and media outlets, submitted Freedom of Information requests for DEC’s DNA study. DEC sent out letters in September that this study would not be available until October at the earliest.

The second DNA study, again organized by NERS, and this time performed by Princeton University, found that the Cooperstown wolf had 96.2% wolf DNA. Once that report was out, the DEC decided to release its DNA study from East Stroudsburg University to Mike Lynch who was reporting on the second independent DNA study. It turns out that the DEC’s DNA study stated the Cooperstown wolf was 65.2% wolf and 34.8% coyote.

The East Stroudsburg University DNA study, based on samples from the dead Cooperstown wolf, was submitted to the DEC on April 13, 2022. Why did the DEC sit on this report for five full months before making it public? A bigger mystery is why did the DEC say publicly that the Cooperstown wolf was a coyote when it had DNA analysis that said it was 65.2% wolf?

After the Princeton DNA study, the DEC released the following statement on September 23rd: 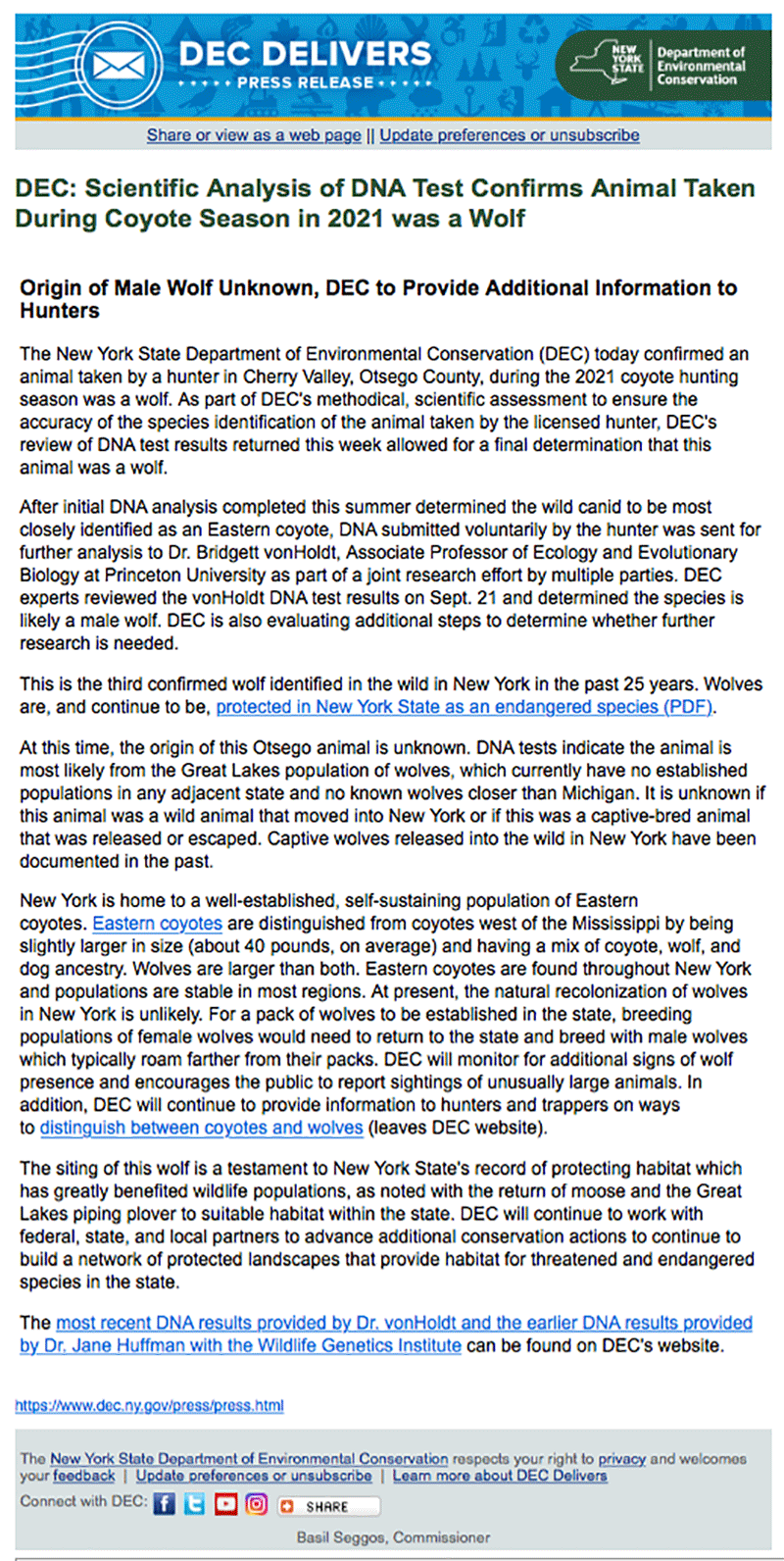 Wolves have been documented coming into NYS in the past two decades. The coyotes that dominate New York State are a hybrid go wolves and coyotes, with many animals having a majority of wolf genes. Over the last 30 years, coyotes in the Adirondack Park have exhibited a number of wolf-like behaviors, such as forming packs, at least on a temporary basis. Deer kills, especially on frozen lakes in the winter by coyote packs are a regular occurrence. Signs of deer kills are frequent on frozen lakes in the Adirondacks.

In addition to acknowledging officially that the Cooperstown wolf, the DEC needs to retain gray wolves on the NYS Endangered Species  Act list. DEC states that wolves are “extirpated” species is in the state.

DEC says it will start to provide information to hunters. DEC has updated its website with information about the differences between a wolf and coyote, using language similar to the Maine Fish and Game website, but much more needs to be done. The DEC website reads:

Wolf vs Coyote: Large coyotes (50+ pounds) have been reported in New York, but they are uncommon. Any canid 50 pounds or greater may be a wolf, wolf-hybrid, or domestic dog. New York law protects wolves from hunting or trapping. It is also illegal to indiscriminately shoot domestic dogs or wolf-hybrids. We have documented a few wolves and wolf hybrids over the last 20 years in New York. In most cases, we believe these animals were released from captivity. However, wild wolves are present in Algonquin Provincial Park in Ontario and it is possible for these animals to travel into New York. Please use care in identifying any large canids you encounter. If you suspect you have a canine in a trap that is over 4.5 ft. in length (tip of nose to tip of tail) and is over 50 pounds, contact NYSDEC law enforcement (1-844-332-3267) before dispatching the animal.

Size comparison of a coyote vs. a wolf track. 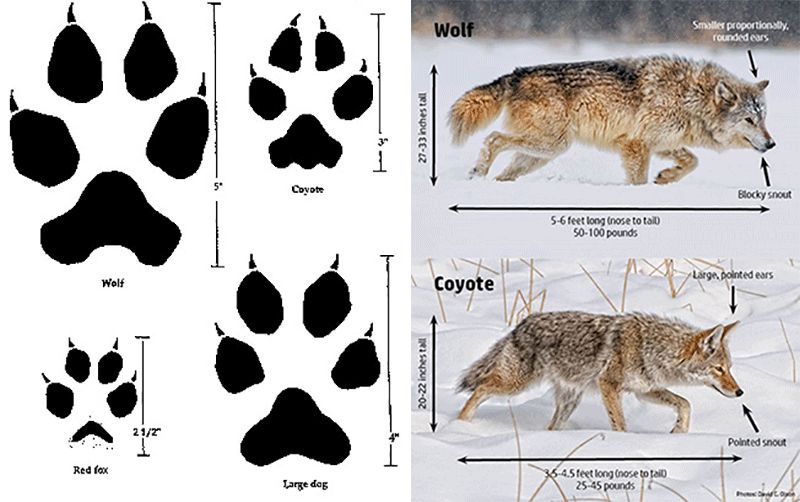 The social media pictures of the dead Cooperstown wolf and the hunter show that the wolf was shot with a muzzleloader rifle with a scope. The wolf was shot by the hunter who was probably out deer hunting during the late muzzleloading season that follows the regular deer season in many parts of New York. In the Adirondacks, muzzleloading, or black powder hunting, precedes the regular deer season. Deer hunters are trained to look for antlers and even estimate the points and size of the antlers. The hunter must have looked at the Cooperstown wolf close up through his scope for at least a couple of seconds before he shot it. Had the DEC provided hunters in NYS with information on wolves, wolf-coyote identification, or the Endangered Species Act protections, that may have caused this hunter to see that he had a protected wolf in his scope, not a coyote, and not to shoot it, to let the wolf go by, and to contact the DEC about its location. All hunters in NYS should be given information about the possible presence of wolves in the state as part of the materials they receive with their hunting licenses.

The issue of wolves recolonizing historic habitat in the Adirondack Park, with its vast forested landscape, or other parts of New York State with large agricultural and forested areas, will not go away. Longstanding research has shown that many coyotes in New York carry wolf genes. This research has shown the amounts of wolf genes in these animals is rising. At what point, and what percentage of DNA, or with what types of DNA, is a coyote legally a wolf? These are important, and complicated, questions for the DEC to reckon with.

Most of all, this episode shows an agency that did not do its job to protect a wild animal in New York State under the Endangered Species Act. The Cooperstown wolf never enjoyed its rightful protections accorded to it under New York State law.

(Picture in this story courtesy of the Oregon Department of Fish and Wildlife.)