Current Legislation in the State Assembly and State Senate seeks to reform the APA Act to protect open space and prevent forest and habitat fragmentation.

This would be the most important revision of the APA Act in 50 years ago.

This legislation is aimed at improving the review and regulation of large-scale commercial speculative subdivisions. This legislation would mark the most important reform of the APA Act since its inception.

When originally adopted nearly 50 years ago, the APA Land Use and Development Plan (LUDP) represented an historic application of natural resource-based land use control. During the nearly 50 years of administration of the LUDP, conservation design principles have not been applied by the APA. The vast proportion of large subdivisions approved by the APA have been typical grid layouts, resulting in undesirable consequences unbefitting the magnificent Adirondack Park which the People of the State have sought to preserve since 1892.

Conservation science has advanced to the point of recognizing that the spatial pattern of development is fully as ecologically important as its density. Widely scattered exurban development, or “rural sprawl,” impairs ecosystem function, decreases biotic integrity, alters species behavior and composition, increases human-wildlife conflicts, undermines the open space character of the Park, and threatens its healthy timber industry.

Studies have shown that siting residential development so that ecological effect zones overlap results in a substantially lower total disturbance and concomitant benefit to the conservation of biodiversity. Conservation design yields more than ecological benefits. Confining development to a portion of a tract requires less infrastructure to be provided by the developer and to be maintained by the local jurisdiction. Lastly, conservation design helps preserve large forested tracts, insuring the continuation of a healthy Adirondack forest products industry.

This bill establishes comprehensive definitions of “conservation subdivision” and “ecological preservation and forest stewardship plan,” to enhance and improve project development and review.

A “conservation subdivision” is any tract of undeveloped or substantially undeveloped land (a) to be developed into a residential subdivision of twenty-five or more lots, parcels or sites in Low Intensity Use areas, ten or more in Rural Use areas, and five or more in Resource Management areas; (b) which has been designed in accordance with an “ecological preservation and forest stewardship plan” prepared by qualified experts and approved by the APA; and (c) which plan provides for the preservation of between 40% and 75% of the tract in contiguous and intact open space by deed restriction, restrictive covenant or other similar legal means depending on APA land use classification.

The ecological preservation and forest stewardship plan must address eight specific areas: 1) terrestrial and aquatic wildlife; 2) connectivity for wildlife passage; 3) vegetative buffers for lakes, ponds, rivers and streams; 4) protection and preservation of vernal pools; 5) preservation of large intact forest tracts while allowing sustainable forestry, if desired; 6) the need to minimize edges between forested tracts and open areas; 7) the need to preserve other valuable ecological resources of the site; and 8) spatial design so as to promote maximum overlap of the “ecological impact zones” of individual dwellings.

The legislation also includes incentives for developers through a density bonus if they configure a development to maximize open space according to set targets. There is also a transfer of development rights provision. The conservation development requirement is aimed at the largest, commercial, speculative developments in the Adirondack Park.

Finally, the bill would take effect 180 days after it shall become a law, and apply to (a) applications received thereafter, and (b) any permitted residential subdivisions not “in existence” (i.e. subdivisions or portions of subdivision substantially commenced and for which substantial expenditures have been made for structures or improvements), ensuring that the act will apply to “paper subdivisions.”

The bill introduces the concept of “conservation design” for the development of large subdivisions within the Adirondack Park. The categories of lands subject to the bill are classified by the APA as Low Intensity, Rural Use and Resource Management. The goal of the legislation is to direct large-scale residential development in these categories to those sites that protect ecosystem function, increase biotic diversity, protect species composition, habitat and forest lands. The resulting development can reduce roadways, water and sewer lines, power lines and other infrastructure. As a result, the subdivision will provide greater open space and enhance ecological benefits for the residents and the community. 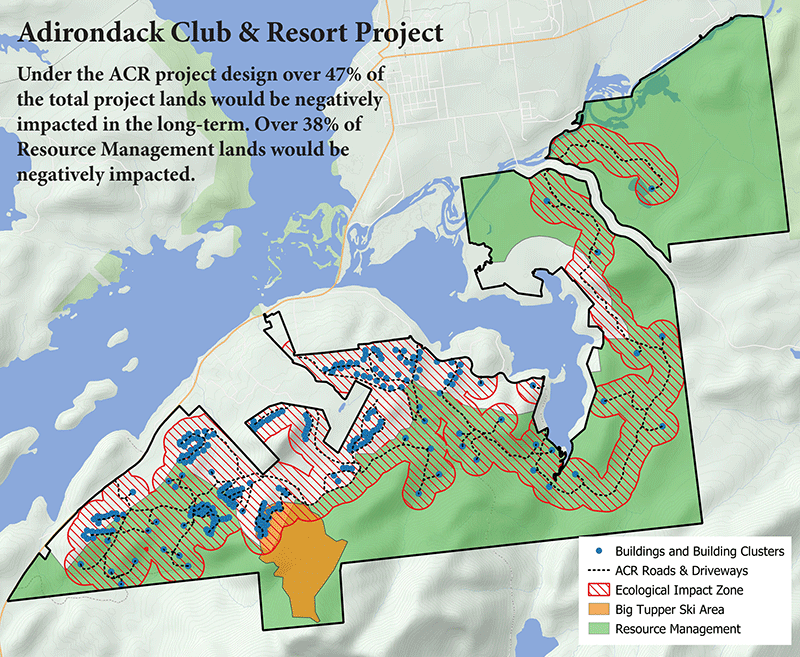 The controversial ACR project in Tupper Lake was permitted to scatter new buildings and roads throughout a largely undeveloped intact 6,000-acre forest that surrounds the Big Tupper Ski area. Because of the project’s design, over 47% of the lands involved would be negatively impacted by development in the long-term. The map above shows an ecological impact zone analysis for the ACR project, with the 47% of the area negatively impacted by development.

Ecological impact zone analysis looks at the long-term impacts from  development on the surrounding natural resources and wildlife. The impacts of development extend far beyond the land underneath a building, road, or utility line corridor. Each dwelling in a forested area has an ecological effect zone extending far beyond the immediate disturbed area of the site. For birds, one study concluded it is 200 meters or 12.6 ha (31 acres). For small mammals such as marten, fisher, fox and coyote, it is between 200 and 250 meters. A road and building in an intact forest setting radiate out negative impacts that change the wildlife species composition and the forest understory. Scological impact zone analysis shows that considerable areas are impacted by development, especially if development is strewn far and wide through a forested landscape, such as with the ACR project above. 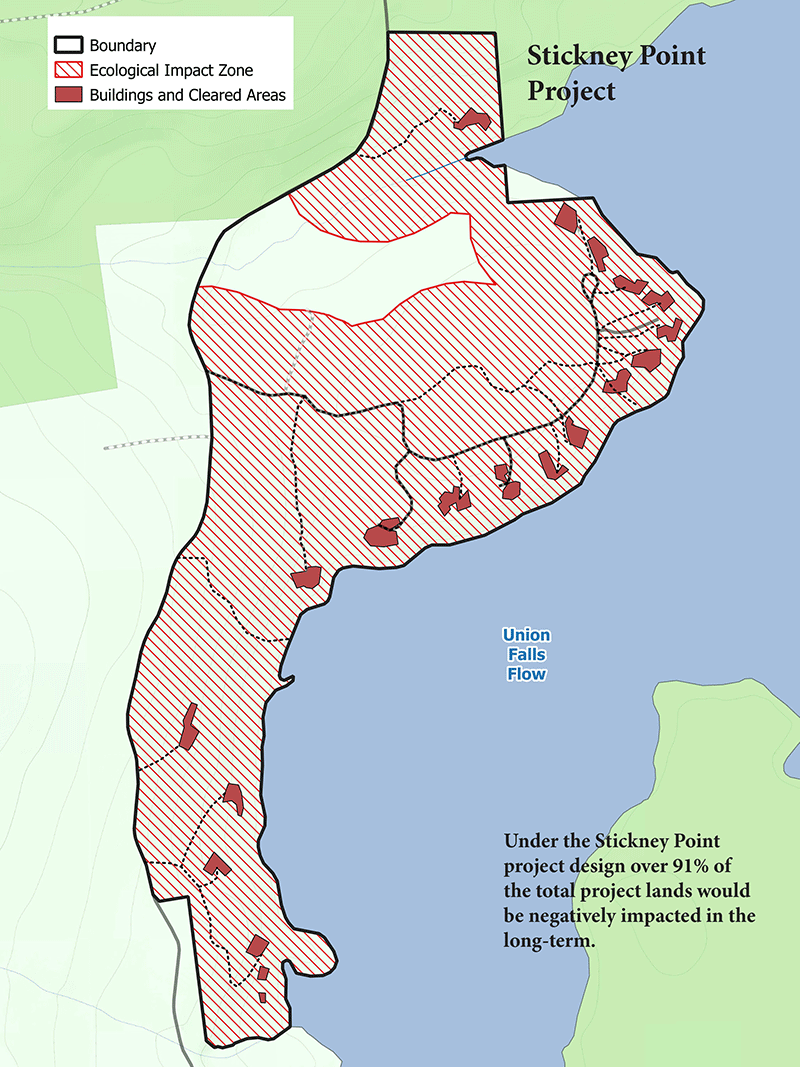 The Stickney Point subdivision on Franklin Falls reservoir was approved by the APA in 2007. It’s a typical lakeshore subdivision with side-by-side, piano-key lots. The buildings are sprawled throughout the tract, negatively impacting over 91% of the lands. The map above shows an ecological impact zone analysis for the Stickney Point project, with 91% of the area negatively impacted by development. 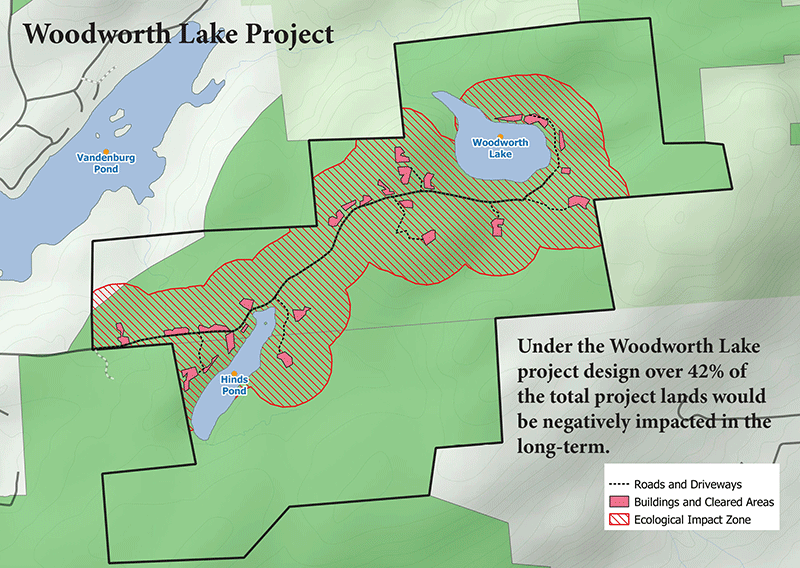 Conservation Design Bill was Subject to Extensive Negotiation and Compromise

Following the original introduction of this legislation in 2015, the bill was subjected to extensive negotiation with organizations representing local government, the forest products industry, and other Adirondack interests. Changes to the bill included addition of a density bonus, protections for forest management, a provision for transfer of development rights, a streamlined regulatory review process, an exemption for small subdivisions and a hardship variance, among other changes. These changes, which include incentives for developers, produced the current version of the bill that address the long-term interests of property owners and natural resource protection in the Adirondack Park.

The success of the extensive negotiations is seen in support of many organizations in the 2019-2020 Memo of Support by many different organizations. Here are some of the main features of the legislation.

Legislation Clarifies and Makes Predictable Regulatory Review: The bill requires the identification and evaluation of environmentally sensitive areas on the proposed development site at the beginning of the review process. By requiring this data with the application early in the process, the applicant can identify areas of the site most appropriate for development. This can avoid problems and additional costs later in the review process, as might be the case with traditional development proposals. In this way, problems and important natural resources areas within a project site are identified at the beginning of the review process. Making the APA regulatory process more predictable is an important part of this legislation.

Hardship Variance: The legislation includes a hardship variance, which was included with Adirondack landowners in mind who are land rich and cash poor. Under this measure, a landowner who needs to create 5 or more lots in a Resource Management area, 10 or more lots in Rural Use, and 25 or more lots in Low Intensity, can undertake a process to be exempt from conservation development requirements based on an economic hardship. This legislation is designed to capture large-scale commercial and speculative developments, not lands being subdivided for family purposes. The hardship variance is an important part of this legislation.

Density Bonus: As previously noted, the bill contains considerable incentives, one of which is a measure that creates a density bonus. Under this legislation, a developer can secure a 10% or 20% increase in the number of principal building rights in all APA land use areas by conserving larger amounts of the proposed development in open space. This legislation is based on clustering development and creating large blocks of open spaces. If a developer goes beyond the bill thresholds for required open space, they can secure additional principal building rights above and beyond current APA levels. The density bonus is an important part of this legislation.

Conservation Design and Open Space for Logging: Forest products leaders in New York State have found that forest fragmentation is the greatest long-term threat to commercial forest products management in the state. By emphasizing the creation of a large conservation lot at the time of property development, when lands are generally split up and taken out of viable forest management, this legislation seeks to safeguard and foster long-term active forest management in the Adirondack Park. The preservation of open space so that forest management can actively continue is an important part of this legislation.

Clustering Development Minimizes Expenses for Developers: It is well established that clustering of structures results in a reduced development footprint on a project site, thus providing far greater ecological and economic values to the homeowners. There is no data to suggest that the value of the land is negatively impacted. In fact, in communities utilizing conservation design, which is widely used by local governments across New York State, the value of the property is generally enhanced by such sustainable development. Many land buyers find that inclusion of access to a large common private lot in connection with their property is very attractive. The developer still has the benefits of selling the same number of units, or more under the density bonus, than would have been allowed with a traditional development pattern.

2021 is the year to pass conservation design legislation.