It’s been nearly two years since the New York Court of Appeals, the State’s highest court, ruled that extra-wide Class II Community Connector Snowmobile Trails designed, approved, and constructed by the Department of Environmental Conservation (DEC) and the Adirondack Park Agency (APA) violate Article 14, Section 1, of the New York State Constitution, the famed the “Forever Wild” clause. The high court’s decision followed a decision in 2019 by the Appellate Division, Third Department, that Class II trails violate Article 14. The Court of Appeals decision came out in May 2021 and we’re now into our second winter where the DEC and APA continue to operate unconstitutional Class II trails as if the courts have not ruled against them.

Protect the Adirondacks is now back in court in an effort to get the state to comply with the appellate court decisions.

After the Court of Appeals decision, the DEC and APA rescinded their snowmobile guidance document that had authorized Class II trails and stated they would not build any more Class II trails. Protect the Adirondacks’ lawsuit challenged the legality of the first 34 miles of what would have been hundreds of miles of Class II trails.

After the Court of Appeals struck down Class II trails, the DEC pulled a nifty sleight of hand, stating that it would go back to using a snowmobile policy from the 1990s, “Office of Natural Resources-2 Snowmobile Trails-Forest Preserve” (ONR-2). ONR-2 authorized “Class A” trails that were approved at 8 feet in width and up to 12 feet wide on hills and curves. The Class A trail designation merely replaced the former “Class II” designation of trails that were 9 feet in width and 12 feet wide on hills and curves. This was not a substantive change in DEC’s policies or plans. It certainly did not mark any kind of meaningful reform of DEC’s Forest Preserve management. Protect the Adirondacks believes that this action was a shell game and not responsive to the Courts’ decisions.

In its wide-ranging decision, the Court of Appeals focused on excessive tree cutting and trail widths, substantial terrain alterations, and damage to the overall wild state of the Forest Preserve. The high court stated that Class II trails are “constitutionally forbidden.” Protect the Adirondacks argued throughout 2021 in letters to state officials and in DEC advisory forums that DEC and APA had a lot more work to do on the former Class II trails to comply with the courts than simply calling them something else. We argued that the trails had to be closed or repurposed for other recreational activities, and that they had to be restored, trees had to be planted, wide benchcuts (making trails over 20 feet wide in places) had to be removed, and wide bridges had to be narrowed or removed, among other things.

At the end of 2021, the DEC formed the Forest Preserve Trails Stewardship Working Group, an advisory body composed of environmental groups, trail building groups, and local government leaders from the Adirondacks and Catskills. The initial meetings of this group in December 2021 and early 2022 were rough. It was clear that DEC and APA staff were continuing to willfully resist the reality that the Court of Appeals decision compelled them to reform their management of the Forest Preserve.

A joint Assembly-Senate budget hearing on February 1, 2022 provided another instance of DEC’s willful resistance to change. At that hearing, Steven Englebright, then Chairman of Assembly Committee on Environmental Conservation, asked DEC Commissioner Seggos about the snowmobile trails that were involved in the Court of Appeals decision. Seggos’s answer was misleading:

Chairman Englebright: “In May of 2021, the Court of Appeals found that the DEC and the Adirondack Park Agency approval of certain snowmobile trails construction was unconstitutional. What is the status of these trails? Are they being restored as per the logical follow through on the court decision and are they open for use in their modified form?”

Commissioner Seggos: “Certainly any of the trails that would have been started pursuant to that historic plan went to a grinding halt when we saw that the subject was brought before the court. Any of the trails that are being used now are the ones that are historic in nature, of course, and predate the litigation, and we have not added any more trails in the Adirondacks.”

Seggos’s answer was not true. The Seventh Lake Mountain Trail in the Moose River Plains did not “predate” the lawsuit, which was filed while that trail was still under construction, yet was open to snowmobiles and being groomed as Seggos testified. Other unconstitutional trails were also still open. At that point we realized that we would have to go back to court to get the state to comply with the appellate court decisions. 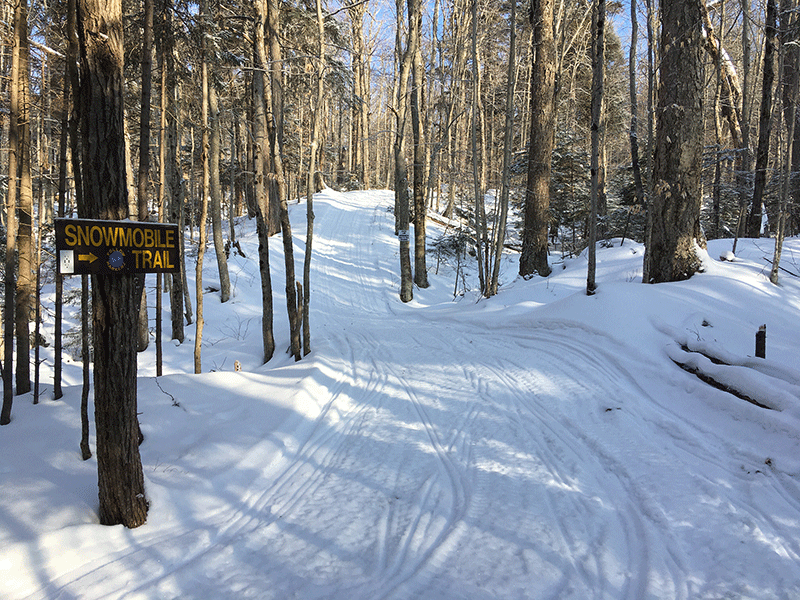 Part of the unconstitutional Seventh Lake Mountain Trail in early 2022, groomed and open by the DEC as if was business as usual.

In early 2022, we went back to State Supreme Court in Albany, the court of original jurisdiction, to inform the Court that the State has failed to comply with the Court of Appeals decision. The Judge asked both sides to try to work things out, and months of negotiations followed.

The spring and summer saw some changes to DEC’s approach to Forest Preserve management. The long-time Director of the Division of Lands and Forest, who had been a key obstacle to Forest Preserve management reform during his career and was one of the architects of the illegal Class II trail program, retired. At the same time, meetings of the Forest Preserve Trails Stewardship Working Group saw other groups urge DEC-APA to stop ignoring reality and to start complying with the Court of Appeals decision. Members of the Working Group called on DEC to implement portions of the Court’s decision addressing trees of 1” diameter at breast height, trail widths, and terrain alterations.

Additionally, at these meetings, Protect the Adirondacks continued to press the DEC to create a public review process through which its management actions are scrutinized for constitutional compliance, something that had not been done before. In the summer of 2022, DEC responded by posting notices of draft Work Plans for Forest Preserve management activities in the Environmental Notice Bulletin (ENB). These notices included draft Work Plans and included a public comment period. Previously, an ENB post would announce that a final Work Plan had been approved, but there was no comment period, and the Work Plan was not provided to the public. This new effort at transparency marked an important reform for the DEC.

By the fall of 2022, the Working Group started reviewing and commenting on a draft mission and vision statement to guide the work of the DEC’s state lands staff and a draft guidance document that set out instructions for developing draft Work Plans. Protect the Adirondacks proposed reforms to the Work Plan template and development process, starting with a written evaluation of constitutional compliance.

A draft new Commissioners Policy-Forest Preserve Work Plans is now out for public comment (until February 27th) that outlines the steps necessary for the development of a Work Plan for a Forest Preserve project. New procedures for Work Plan development are now enumerated, tree protection affirmed at 1” DBH, alternatives analysis and statement of desired outcomes included, terrain alterations analyzed, among other reforms.

While these tentative reforms are important, they do nothing to repair the damage done to the 34 miles of completed and partially built Class II trails that were the focus of the Court of Appeals decision. By December 2022, negotiations between Protect the Adirondacks and DEC-APA had reached an impasse. We had attempted to reach agreement on the future of these former Class II trails and future policies for trail construction. But the State would not meet us halfway and refused to make binding commitments on many of the issues.

Going into the 2022-23 winter season, it appears that for the second year in a row the DEC plans to groom and manage illegal Class II trails as if it is business as usual. Protect the Adirondacks has now asked the original trial court in Albany to implement the decisions of the appellate courts and bring the State into compliance with the Constitution.

Reforms come slow to state agencies. Reforms come especially slowly to management of the three-million-acre Forest Preserve in the Adirondacks and Catskills. Sometimes public advocacy can drive reforms in New York, sometimes exceptional leadership from state agency employees can do it, sometimes it’s a directive from the Governor, sometimes it’s new state laws. Other times, it’s legal action in the courts.

In this case, important reforms to Forest Preserve management were jump-started by the Court of Appeals decision, which will continue to positively shape management for decades to come. The DEC and APA still have a lot of work to do to get their houses in order when it comes to Forest Preserve management. 2023 marks the 11th year of Protect the Adirondacks’ Article 14 legal odyssey that challenged and prevailed, in a David and Goliath struggle, over state agencies that were circumventing the state Constitution in order to open the Forest Preserve to ever-increasing levels of motorized recreation and were using its management as bargaining chips for their political deals and objectives.

Hopefully, the next 11 years will see a new era of transparency and reform in Forest Preserve management. 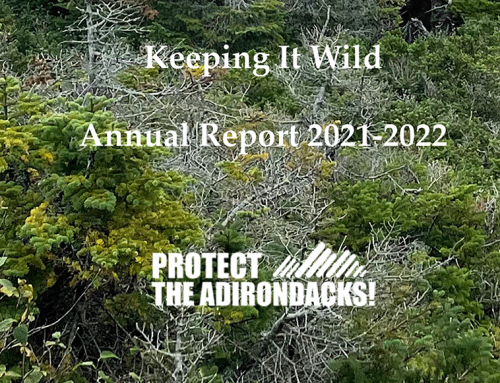