Forests and Carbon: Why we need to preserve New York’s intact forests and plant new forests

Forests are vital for carbon sequestration and long-term storage. According to the US Forest Service, U.S. forests sequester 866 million tons of carbon a year, which is roughly 16% of the US annual emissions. This carbon is sequestered primarily in trees and soil.

One of the most important things we can do to combat global climate change is to protect intact mature forests and expand preserved forests. It’s important that we allow forests that exist now, that are growing now, to continue to mature and age, which maximizes carbon storage. The preservation of mature forests will have a much greater impact on slowing global change than simply planting small trees, though reforestation and tree planting remain important long-term strategies.

There are the basic concepts that help to understand carbon and forests.

Carbon capture is the process by which carbon is removed from the atmosphere and incorporated into plant tissues through the process of photosynthesis.  Photosynthetic cells in plants split atmospheric carbon dioxide (CO2) molecules, and combine the carbon with water (H₂O) to create glucose (C₆H₁₂O₆), a basic building block of life.  The byproduct of photosynthesis is oxygen (O2).   Photosynthesis is responsible for the vast majority of carbon capture that has occurred on planet earth over the past billion years.  Fossils fuels are simply ancient plants that partially decomposed and became trapped in rock millions of years ago.

Carbon emission is the process by which stored carbon is returned to the atmosphere. In contrast to carbon capture, which is almost solely the result of photosynthesis, carbon emission occurs through many processes including respiration, decomposition, and combustion. Respiration is the process by which living cells generate energy by using oxygen (O2) to crack stored carbon in molecules such as glucose, C₆H₁₂O₆.  The byproducts of respiration are carbon dioxide (CO2) and water. Like most living cells, plant and tree cells must respire to survive, and are thus emitting carbon dioxide day and night, all year long. Combustion is another process that returns stored carbon to the atmosphere.

Carbon flux is a measurement of relative carbon emission versus capture.  To calculate carbon flux, one simply subtracts the amount of carbon captured from the amount of carbon emitted. A negative carbon flux means that carbon is being captured at a higher rate than it is being emitted.  This is called a carbon sink.  If more carbon is being emitted than stored, the flux is positive and this is called a carbon source. Carbon flux can be measured at a variety of scales, from single cells to organisms, ecosystems or the entire planet.  Carbon flux can also be measured at a variety of time scales from milliseconds to days, years, centuries or millennia. 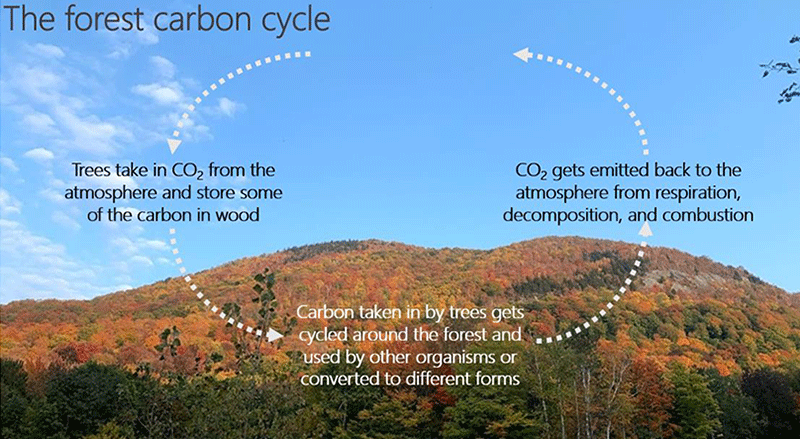 The carbon cycle. From Kosiba, AM. “What is Forest Carbon?” Vermont Department of Public Health, 2021

To illustrate this concept, consider a single sugar maple tree in a New York Forest.  On a sunny summer day, the amount of carbon captured through photosynthesis vastly outweighs the amount of carbon emitted through respiration, so there is a negative carbon flux, and the tree acts as a carbon sink.   At night however, the tree is still respiring to keep its cells alive, but there is no carbon capture.  The tree becomes a carbon source, at least until the sun returns.  On average, however, the tree captures more carbon than it emits, and uses that carbon to grow and reproduce.  Plants that do not maintain a negative carbon flux will eventually die.

Carbon sequestration is the process of capturing and storing atmospheric carbon dioxide.  Areas where the net carbon flux remains negative over a period of time are sequestering carbon.   In forests, carbon is primarily sequestered in the trunk, limbs and roots of trees.

Carbon storage is the total amount of carbon that has been pulled from the atmosphere and is held in the forest in trees, both living and dead, and soils. Half of the dry weight of a tree is carbon. The bigger the tree, the more carbon is stored. Carbon storage increases when cArbon capture exceeds emission over a long period of time. An older forest, generally, sees greater levels of long-term carbon storage. 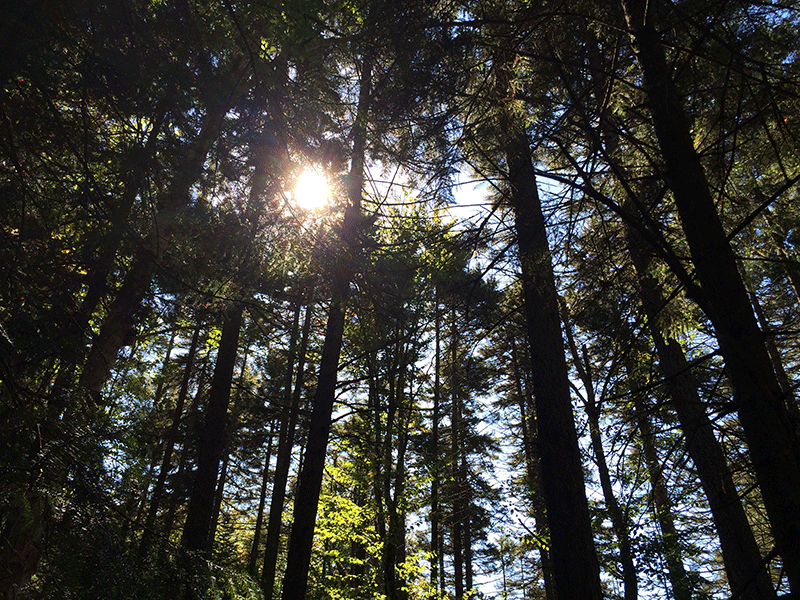 As a forest grows and ages the amount of biomass grows dramatically. Biomass is all plant materials, both dead and alive. The bigger the tree, the bigger the biomass. It’s important to note that as a tree grows, its root structure also grows, which means that its below ground biomass greatly expands.

There are a number of studies (see some useful ones here, here, here) that found that it’s the biggest trees in a forest that contain the most carbon. In this way 2% or 3% of trees in a forest, depending on species, age, and forest type, can contain more than half of the carbon in the forest.

A typical forest sequesters and stores carbon at different rates depending on the average age and abundance of its trees. Young, new forests have high numbers of small trees and sequester carbon at high rates. While young trees grow quickly, not every small seedling grows into a sapling and becomes a large tree due to fierce competition for light, moisture, nutrients, and space in the forest. Though these trees grow rapidly they are relatively small diameter trees for years or decades, hence they store low levels of carbon long-term because they don’t possess much biomass. These trees also experience high mortality, but when they die and decay there’s relatively little carbon to be re-emitted due to their small diameter size. 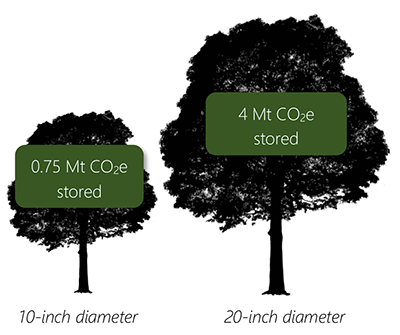 Source: Kosiba, AM. “What is Forest Carbon?” Vermont Department of Public Health, 2021

As the forest matures, the trees that survive continue to grow and sequester higher rates of carbon. In the Adirondacks, a white pine or sugar maple can live for 250-350 years. After several decades, these ”mature” forests are comprised of medium-aged trees that are medium to large in size, healthy, and have large root systems. These mature trees grow more slowly than young trees, but while the rate of carbon sequestration slows, the amount of stored carbon continues to grow. While some mature trees die, the remaining trees form a high, thick canopy forest. In these mature forests, roots continue to grow below ground and stores carbon in forest soils grow as decayed leaf litter and other forest matter decay. In the Adirondacks, mature forests start to form around 75 to 125 years in age. The graphic on the right shows that carbon storage is much greater as trees grow in diameter.

The value of an old growth forest for carbon storage goes beyond its dominant big, old trees. Root systems can be massive underground and store carbon. Soils build up decade after decade and hold vast amounts of carbon. Carbon is also held in dead trees that fall and these downed trees create openings in the canopy that allow new trees to grow. Old growth trees are taller and bigger in diameter, which means they possess far more biomass than mature or small trees, which means that they store high amounts of carbon. While the overall productivity of an old growth tree limits its annual sequestration of carbon due to age, vast amounts of carbon are well contained within the old growth forest in big trees, slowly rotting dead trees, deep leaf litter and soil.

In the Adirondacks, the role of the Forest Preserve is vital as we have hundreds of thousands of acres of mature forests that are heading towards old growth. On newly purchased lands, we have young forests that will be allowed to grow into mature closed canopy forests in the decades ahead.

Long-term carbon storage increases substantially with tree size and age. Source: From Kosiba, AM. “What is Forest Carbon?” Vermont Department of Public Health, 2021

These are tragic times in the U.S. The last decade of drought and invasive species have transformed huge swaths of forests in the west and center of the country into carbon sources. These forests, due to fires and tree mortality from pests and diseases, now emit more carbon into the atmosphere that they sequester. This is heartbreaking.

In New York and the northeast in general, which have seen tremendous forest recovery over the last 100 years, our forests act as net carbon sinks, effectively capturing and storing far more carbon than they emit. The most beneficial forest management policy in the future in New York to combat climate change is to let existing intact forests continue to grow and to reforest other areas.

These articles provide a good overview of issues relating to forests and carbon sequestration/storage, including some regional ones about urban and rural forests in New York and New England. Each article contains numerous references to other works if readers seek more information.

Montaigne, Fen. Why Keeping Mature Forests Intact Is Key to the Climate Fight, interview in Yale Environment 360 with William Moomaw, 2019

Kosiba, AM. What is Forest Carbon?, Vermont Department of Public Health, 2021