A coalition of Adirondack conservationists is calling on Gov. Andrew Cuomo to sign into law a bi-partisan bill that would help reduce road salt pollution and protect drinking water in the Adirondack Park.

The legislation creates an Adirondack Road Salt Reduction Task Force and Pilot Program. If approved by the Governor, the new law would establish a salt-reduction pilot program from October 2021 through 2024 to test alternative measures already shown to work better and cost less than current winter road maintenance practices.  Highway safety would remain the top priority.

New York State has applied millions of tons of road salt to the park’s highways since it began using salt in 1980.

The Adirondack Park contains more than 11,000 lakes and ponds, and more than 30,000 miles of rivers, brook and streams.  It is the source of most of the state’s major rivers.

The park’s hard bedrock, thin soils and steep slopes make it the place where road salt damage – like acid rain damage — is likely to appear first and cause the most harm.  Lessons learned in the Adirondacks can be applied statewide in the years ahead, Janeway said.

The bill was passed in honor of the late Randy Preston, who served as Wilmington Town Supervisor until his untimely death from brain cancer one year ago.  Preston helped to rally local government support for protecting the park’s drinking water, lakes and rivers from road salt.

“Salt-contaminated drinking water is a serious public health concern,” said Brittany Christenson of AdkAction, a regional project-driven nonprofit that has been pressing for a reduction in road salt pollution for nearly a decade. “When it strikes a private well, it becomes a hazard for people with high blood pressure and other health conditions. Salty water can become a costly crisis for local families.  They need to buy bottled water and replace appliances, pipes, and even drill new wells. As salt contamination spreads, it can affect entire community water supplies. It has already spread too far.” 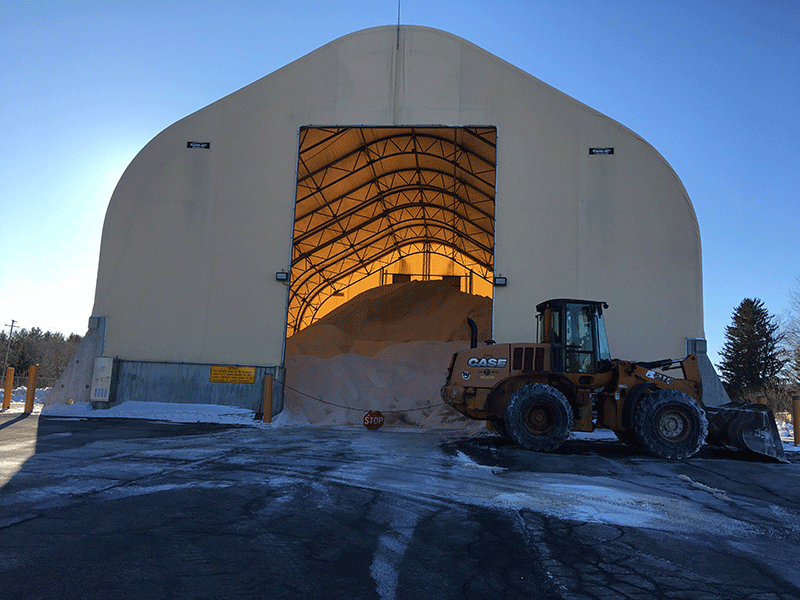 A municipal salt shed in the southern Adirondacks, stocked with tons road salt.

“The Adirondack Park’s abundant supply of fresh water is at risk as is the health of our lakes, rivers and wildlife,” said William C. Janeway, Executive Director of the Adirondack Council.  “Salty lakes and salty wells are bad news and something that won’t just go away overnight when we stop using salt.  We can’t allow this damage to continue unabated.”

“Direct runoff from road salt is inhibiting spring turnover in Mirror Lake, an essential process that redistributes oxygen throughout lake waters,” said Kelley Tucker of the Ausable River Association. “Mirror Lake is one of only nine lakes in the United States to have an interruption in lake-turnover documented in the scientific literature. It’s a significant health threat to the lake, increasing water temperature, reducing oxygen, and directly threatening multiple species, including the iconic lake trout population.”

“For three decades the Adirondack Park Agency has invited NYS DOT to present on how to reduce the amount of road salt applied each winter,” said David H. Gibson, managing partner in Adirondack Wild: Friends of the Forest Preserve.  “Each time, DOT explains that alternatives to road salt and new application methods were constantly being tested on short sections of state roads. That limited approach has resulted in widespread contamination of water supplies. As a matter of Park policy and public health, this legislation is sorely needed.”

“On top of all the adverse health effects that come with sodium, chloride from road salt can also corrode metals and damage plumbing. This corrosion can leach lead from pipes into home drinking water, even when the source is not contaminated with lead.  New York needs a strong plan to protect water and reduce road salt. This legislation is a good start,” said Robert Hayes, Clean Water Associate at Environmental Advocates NY.

“Reducing road salt in Adirondack Park would help improve water quality and decrease pollution in one of our state’s most beautiful greenspaces,” said Patrick McClellan, Policy Director of the New York League of Conservation Voters.  “We thank the State Senate and Assembly for passing this important legislation and commend Senator Kennedy and Assemblyman Jones for their leadership.”

“The Adirondack Road Salt Reduction Task Force and Pilot Program will help New York find new ways to keep our roads safe in the cold weather while protecting clean drinking water, and ensuring our lakes and rivers are healthy for the people and nature who depend on them,” said Peg Olsen, executive director of The Nature Conservancy’s Adirondack Chapter.  “We applaud Senator Betty Little, Senator Tim Kennedy, and Assemblyman Billy Jones for championing this legislation.”

“This legislation is a significant step toward addressing water contamination in the Adirondack Park. We are excited because this study and pilot program will not only benefit the park, but ultimately all of New York State,” said Michael Barrett Executive Director of the Adirondack Mountain Club.

In addition to damaging cars and roadways, road salt corrodes bridges and parking structures.  Repair, maintenance and replacement of road infrastructure corroded by road salt costs are estimated to cost $18,563 per land-mile per year. Repair, maintenance and depreciation of motor vehicles from road salt corrosion amounts to an estimated $3,416 per lane-mile per year. As salt leaches into groundwater, it is making streams saltier in the summer and is releasing heavy metals and other toxins from sources that would otherwise remain harmless, the Watershed Institute’s tests have shown.

Preliminary results from pilot salt reduction efforts in the Lake George Region have demonstrated in excess of a 30% drop in salt expenses. Roughly $16 million is spent on road salt in the Adirondacks each year.

This new legislation directs the Dept. of Transportation and Dept. of Environmental Conservation and the Dept. of Health to cooperate in a three-year Adirondack Park wide road salt application reduction pilot.

According to the bill:

“The Task Force report and recommendations shall be due September 1, 2021. The task force shall recommend Adirondack state road winter maintenance practices to remediate salt contamination of our surface and ground waters.

“The Adirondack Road Salt Task Force recommendations for updated levels of service, best management practices, and road salt reduction targets shall guide the Departments of Transportation, Health, and Environmental Conservation in measurably reducing sodium and chloride levels in both surface and ground waters.”