The 3-million-acre Forest Preserve in New York State is finest state lands system in the U.S., but it does not enjoy the finest management in the country. Now is the time to press for improvements in the management of the High Peaks and demand that the Cuomo Administration make adequate investments to build a network of sustainable trails, build proper facilities for parking and shuttles, invest in public education, adequately staff the High Peaks with planners, scientists, Rangers, and permanent trail crews, and effectively monitor and evaluate public use impacts.

The Cuomo Administration’s refusal to invest in the management of the High Peaks is mystifying. The High Peaks Wilderness, and neighboring Hurricane Mountain and Giant Mountain Wilderness areas, are seeing the highest use in their history with mountains like Cascade Mountain seeing upwards of 40,000 hikers annually and others like Algonquin, Giant and Mount Marcy seeing over 30,000. More than 30,000 hikers walked through the gates of the Adirondack Mountain Reserve last year to hike the Great Range or Blake, Colvin, Dial or Nippletop mountains. In general terms, overnight camping has seen a slight uptick, but the number of day users in the High Peaks has risen significantly.

State agencies spent over $25 million, with more to come, and added 5 new permanent state agency staff positions â€“ the only new DEC positions this year â€“ to build the new Frontier Town Campground. They’re poised to spend millions more to build the new multi-use recreation trail from Lake Placid to Saranac Lake. They’ve spent millions of dollars building miles of little used, road-like, class II snowmobile trails. Yet, the High Peaks Wilderness, which sees more people on one summer weekend than Frontier Town will see in a full season, or the new class II trail in the Moose River Plains will see in a decade (or two), receives scant investment and is plagued by poor trails that damage natural resources and undermine the overall hiking experience.

The issue of overuse in the High Peaks has been well documented with crowds of hikers lining roadsides on Route 73 at trailheads for Giant, Dix and Cascade Mountains as well as on the Adirondack Loj Road. The past year has seen a flurry of proposals and reactions about ways to improve the management of the High Peaks Wilderness Area. Calls for reforms have ranged from trailhead parking permits, to trail permits for certain peaks, to more Rangers, to more state professional wildland managers dedicated to the High Peaks, and for rebuilding state trail crews. All of these ideas have merit and they lead to the same place â€“ that the Cuomo Administration needs to make a greater investment in the management of the High Peaks Wilderness and needs to build a comprehensive management system and program. 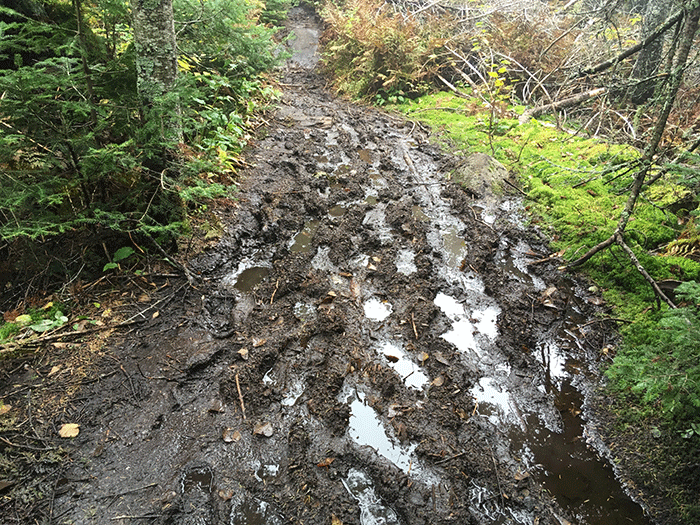 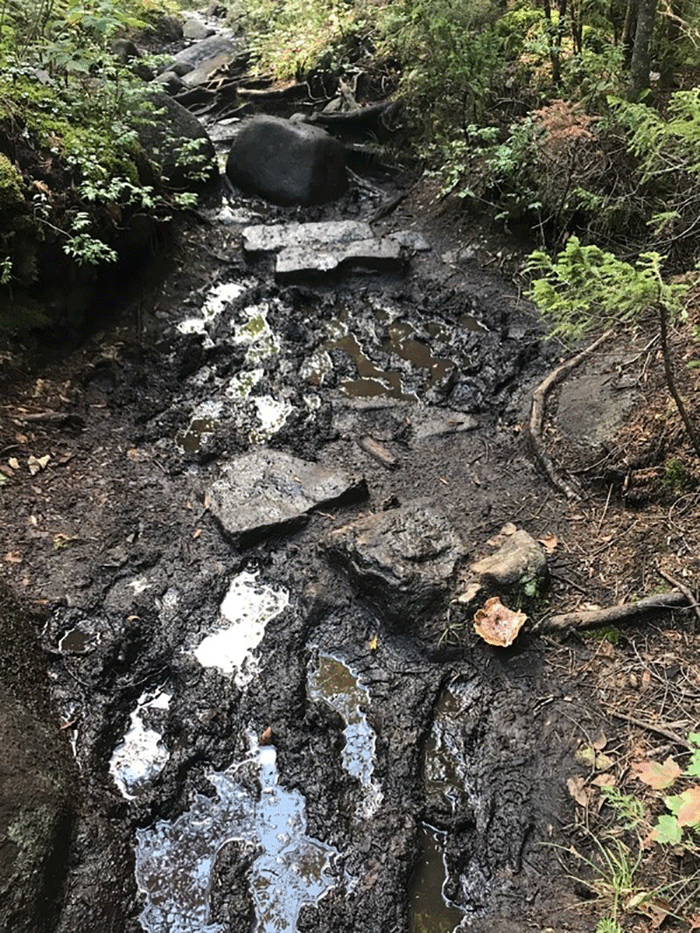 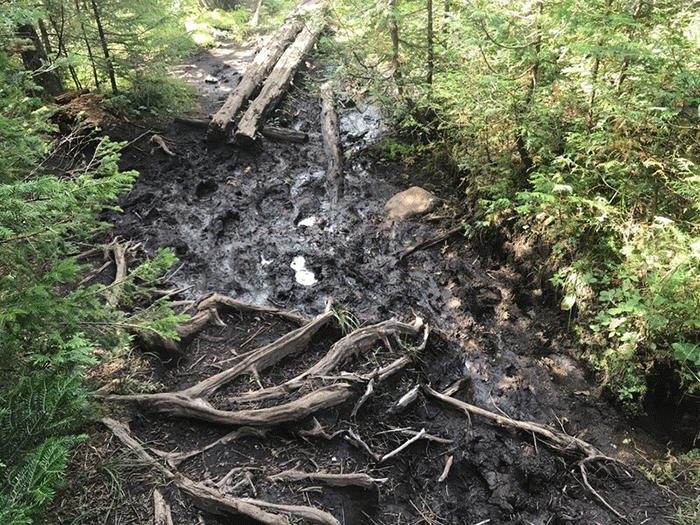 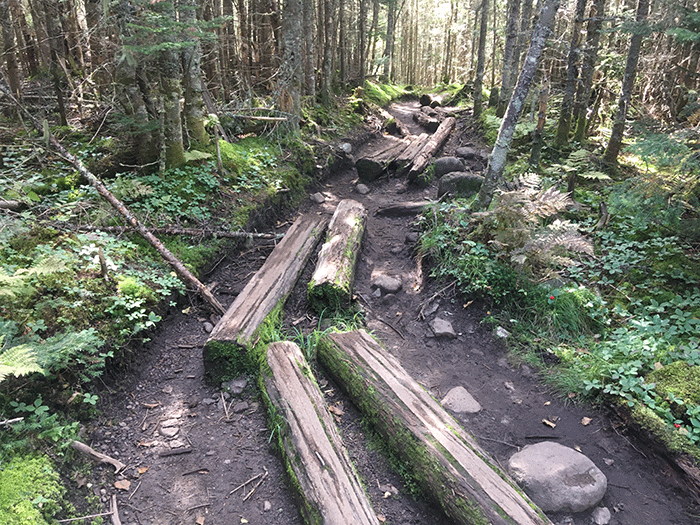 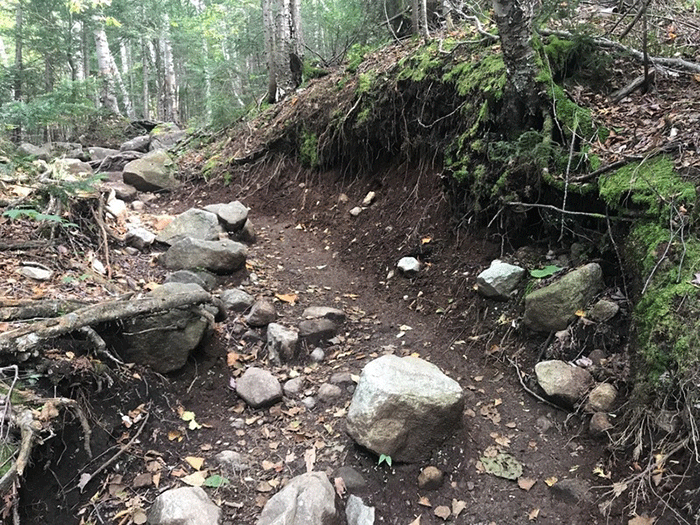 These pictures are a small sample of the poorly maintained and poorly designed hiking trails that run straight up the mountainsides of many mountains in the High Peaks Wilderness. It’s high time for the Cuomo Administration to invest in rebuilding the hiking trail system in the High Peaks.

For their parts, state agencies finalized a Unit Management Plan amendment for the High Peaks Wilderness last year that approved facilities for newly purchased lands at the Boreas Ponds and made minor changes to current management. Chief among these was the re-route of the trail up Cascade Mountain and new trail to Mount Van Hoevenberg. The state also moved to ban roadside parking on sections of Route 73 near the Roaring Brook parking area for the trail to Giant Mountain, limited roadside parking at the Cascade Mountain trailhead, and established new public parking at the Mount Van Hoevenberg Ski Area for Cascade. Much of the trail work on both Cascade and Mount Van Hoevenberg must still be completed. As we move into the final month of winter and dream of a new hiking season, it’s clear based on the new state budget that the Cuomo Administration and state agencies are content with the status quo and to make minor changes. In 2019, the High Peaks will not receive a Frontier Town type of investment that that these wildlands so desperately need.

This article is the first of two that examines the major questions facing the management of the High Peaks Wilderness. This one deals with the failure of the state to build a sustainable trails system. The second deals with the need for facilities that provide long-term solutions for parking, trail access, permits, scientific analysis for trails management, the need to build a robust public education system, and dedicated management personnel.

Last fall, I hiked the new trail up Hurricane Mountain from Route 9N. It’s largely a modern sustainable trail that replaced the old trail that basically ran straight up the mountainside. The new trail switchbacks up the east side of Hurricane Mountain, gains elevation slowly, and follows a low grade. It’s narrow and employs many waterbars and drainage devices so that water is easily shed from the trail surface, which prevents erosion, standing water, and trail damage. The trail is routed to provide the hiker with a series of views from cliffs and brings hikers to natural systems such as beaver ponds, wetlands, and streams. The new trail is longer, going from 2.1 miles in length to 3.4 miles, with only about .5 mile of the original trail used.

The Hurricane Mountain trail was a pleasure to hike and is one of a handful of new sustainable trails that the DEC has built in the last 10 years. These include new trails on Coney and Goodman Mountains, Lyon Mountain, and Moxham Mountain. These are all well designed and well-built sustainable trails, engineered to withstand heavy use and protect the natural resources along the trail corridors. These trails also protect the public hiking experience because they do not easily erode and efficiently shed water, which prevents long slogs through muddy trenches.

A simple question is “Why can’t all trails in the High Peaks Wilderness be as good as the Hurricane Mountain trail?” The answer is leadership and resources. Both are in short supply in the Cuomo Administration. The new trail up Hurricane Mountain took three years to build and involved the ADK Pro Crew, inmate labor, ADK volunteers, and two crews from the Student Conservation Association. DEC’s rule of thumb is that a major trail reconstruction and reroute takes a 4-person work crew roughly 6.5 weeks for each mile of trail. In the High Peaks Wilderness, including the Giant Mountain area, there are roughly 500 miles of trails, many of which were built in the decades after the Civil War and run straight up mountainsides. More than 100 miles of these trails, especially at higher elevations, require closing and rerouting to build new sustainable trails. The High Peaks Wilderness deserves to have dozens of Hurricane Mountain style trails switch backing up and down mountainsides.

Two years ago, the DEC organized a new High Peaks Trail crew, the first in more than a decade. They worked on campsites at Marcy Dam and Lake Colden. Last year, the trail crew was only a 2-person crew and its work was limited. This year, DEC is planning for two 5-person trail crews and is currently interviewing to fill out their ranks (click here if you’re interested). If these crews work from May through October they may be able to tackle upwards of 10-12 miles of trail work. The DEC priority has been to staff seasonal employees at State Campgrounds and not for trail work. The two High Peaks trail crews are not permanent state employee seasonal positions.

Many trails in the High Peaks have seen extensive trenching which are often filled with mud and standing water. Many places have seen work to harden the trails with rocks and stone staircases. These are difficult to build and oftentimes when the trails are wet or icy hikers walk around the slippery stones, which widens the trail. Many of these facilities have deteriorated from a lack of maintenance. In other places where trails have been eroded down the bedrock wooden staircases have been bolted to the rock face for hundreds of yards. These are Band-Aid solutions where trail redesigns and re-routes are needed.

The two DEC High Peaks trail crews this year will focus on the new trail up Mount Van Hoevenberg and the re-routed trail on Cascade. It’s likely that these two projects will consume their season. The DEC needs to resolve labor issues that have removed the ADK Pro Crew from High Peaks work, develop other trail building partnerships, and work with local governments. With 500 miles of trails, many of which needs reroutes and reconstruction, there’s plenty of work for everybody. The missing ingredient to make this stew is leadership from the Cuomo Administration to make rebuilding the hiking trail system in the High Peaks a priority.

By the metric of public use, the High Peaks Wilderness is a major success. The current dismal state of many of the trails does not seem to be a major deterrent. For many people hiking a mountain like a High Peak is no sure thing and is, and should be, a challenge. There are plenty of highly used and popular smaller mountains that provide stunning views, but the allure of hiking a High Peak is immense. For many the view from a High Peak summit and one’s sense of personal accomplishment, however measured, erases their slog over long sections of crappy trails. We need to change this equation so that people can continue to enjoy the High Peaks, push themselves to hike big mountains, create lifelong memories with friends and family, and do all this while hiking over beautiful and sustainable trails.