Low’s Lake Ruled to be Managed as Wilderness 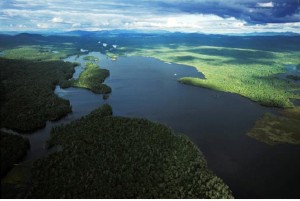 In August 2011, Supreme Court Justice Michael C. Lynch of Albany County, in a lawsuit brought by the Adirondack Mountain Club (ADK) and Protect the Adirondacks! (PROTECT), ruled that the lake is Wilderness and the state must manage it as such. On June 8, the state Attorney General’s Office, which represents DEC and APA, filed a formal withdrawal of its appeal of Justice Lynch’s decision, bringing the matter to a close.

“The conclusion of this case means the bed and waters of Lows Lake are permanently and irrevocably Wilderness under state law,” said Neil Woodworth, executive director of the Adirondack Mountain Club. “It also means that one of the few wild waterways in the Adirondack Park, where paddlers can enjoy their sport unhindered by public use of motorboats and floatplanes, will remain quiet and wild.”

In his 2011 decision, Justice Lynch ruled that the APA erred when it approved a resolution in November 2009 that left the popular canoe route unclassified. Justice Lynch also noted that Lows Lake was included in a 1987 Wilderness classification of about 9,100 acres, a classification that was signed by then-Gov. Mario Cuomo. The decision not only confirmed that Lows Lake has been Wilderness for a quarter century, it upheld the principle that the APA has a legal obligation to classify water bodies that are part of the Adirondack Forest Preserve.

“This decision underscores the fact that the lakes and water bodies of the Adirondacks need protection as much as the land and forests do,” PROTECT Conservation & Advocacy Co-Chair John Caffry said. “In fact, the need to protect Adirondack waters was one of the driving forces behind the creation of the Forest Preserve in 1885.”

The Adirondack Park State Land Master Plan (APSLMP), which is codified as Section 816 of New York State Executive Law, requires APA to classify all lands and waters in the Adirondack Forest Preserve according to “their characteristics and ability to withstand use.” In the past, the agency has left some water bodies unclassified.

Following an earlier lawsuit brought by PROTECT, ADK and the Sierra Club, the APA approved a resolution in April 2009 banning floatplanes from Lows Lake after the end of 2011. The following month, the APA and DEC proposed classifying Lows Lake and other nearby water bodies as Wilderness and adding them to the Five Ponds Wilderness Area. In September 2009, the APA voted 6-4 to classify a portion of Lows Lake as Wilderness and a portion as Primitive. Both classifications prohibit motorized public uses. But then-Gov. David Paterson’s representatives on the APA board changed their position and supported a November 2009 resolution that left the lake unclassified.

Opponents of the Wilderness classification argued that the APA did not have the authority to classify the lake as Wilderness because New York State does not own the entire shoreline of Lows Lake. But Justice Lynch found that “the APA Act and the APSLMP require the APA to classify State owned bodies of water even if the water is contiguous to a private land holding.” The decision affirmed that state-owned lakes and other water bodies in the Adirondack Park are part of the constitutionally protected Forest Preserve and must be managed in accordance with the APSLMP.

Even with the Lows Lake decision, only about 5 percent of the lake and pond surface area in the 6-million-acre Adirondack Park is classified as Wilderness. Public use of motorized vehicles and vessels is prohibited in Wilderness areas.

The Adirondack Mountain Club, founded in 1922, is a nonprofit membership organization dedicated to protecting the New York Forest Preserve and other wild lands and waters through conservation and advocacy, environmental education and responsible recreation.

In 2012, the State of New York chose not to appeal this decision.