One of the most striking maps coming out of the 2016 Presidential election is the red-blue county map. Despite Clinton winning the popular vote by 3 million, the county map shows a sea of red across the U.S. as Trump won 2,632 counties and the country is flecked with blue dots in the interior and on the coasts where Hillary Clinton won 489 counties. In our part of New York, Trump swept everything north of the Mohawk River with the lone exception of Clinton County. He won Lewis, Hamilton, Fulton, and Herkimer counties by wide margins. Having poured over maps of Rural and Urban America in the last few years, the interesting thing to me is that the 2016 Trump victory map tracks closely to the rural-urban divide in the U.S. 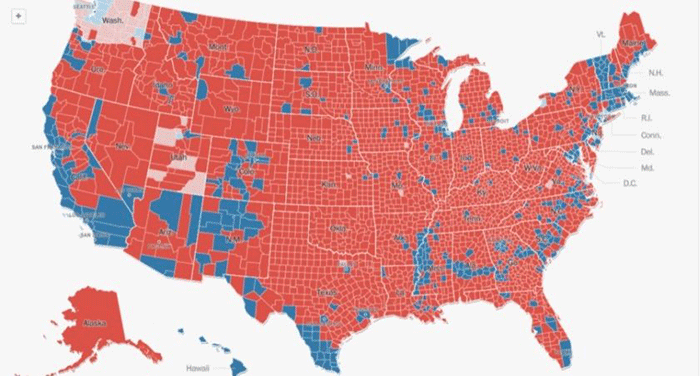 A vast swath of red, flecked with blue dots, marked the Trump victory of counties across the U.S., though he received 3 million fewer votes.

Recent headlines about Rural America in the last few years highlight two trends: 1) Rural America as a whole is losing population for the first time in American history, even as the rest of the country grows. 2) The American economy has fundamentally shifted and rural areas have not recovered employment levels they had in 2009, before the Great Recession, while urban areas have seen major job growth since then.

The population data is stark. The ten most populous counties in the U.S. alone added a total of 9.3 million new residents. This mimics the trends we’ve seen in New York State where Upstate New York lost over 50,000 people since 2010, while downstate counties in and around New York City gained nearly a half million.

Since 2010, the highest number of counties ever is estimated to have experienced population decline â€“ 1,661. Roughly two-thirds of the 3,100 or so counties in the U.S. are counted as mostly rural. In these years, 1,351 rural counties lost population of over 800,000 people.

Today, 62.7% of Americans live on 3.5% of the American landscape. As a country steeped in rural and frontier mythology we’ve never seen such a heavy concentration of Americans in so small an area of the country. Across the U.S., 72% of the landscape is classified as “rural,” yet in 2016 just 46 million people live in Rural America, just 14.2%, out of a total population estimated to be 323 million people. There’s also a disparity in rural areas as the most thinly populated rural areas, such as those like the central Adirondacks with around 2 people per square mile, are seeing the starkest population declines. 42% of the U.S. has a Hamilton County-like population density, yet is home to just 2% of the U.S. population.

Several factors are driving population decline in Rural America. These include long-term outmigration of young adults, mostly college-age young people who leave to pursue a college degree and do not return in large numbers. This sustained loss of young people has skewed the demographics towards an aging population. The aging population is experiencing decline due to natural mortality, which is one trend we can’t reverse. Robert Wuthnow, a noted sociologist who studies Rural America, found that “During the last decade of the 20th century alone, more than 7,000 of the nation’s 18,000 schools in small towns closed.”

There are some bright spots. There were 487 rural counties “with positive but below-average growth (less than the U.S. population growth rate of 5 percent),” which combined together added 281,000 people since 2010. Many are located in rural parts of the Mountain West, southern Appalachia, and other scenic areas. Though these counties showed positive population growth, the rate had slowed. Counties characterized as having “recreation-based economies” grew by 4.6% during 2002-08, but only by 1.2% during 2010-16. This group of counties may hold lessons and strategies useful to the Adirondacks. The one wrinkle is that rural areas that are growing are largely out west, fueled by resort areas and fracking. The dominant trend of rural areas east of the Mississippi River is population loss, which is almost uniform throughout the counties of the mid-Atlantic, northeast U.S., and upstate New York.

Employment is also shifting. Economists can argue about whether jobs follow people or people follow jobs, but the reality of American life in the first decades of the 21st century is that employment is concentrating and growing in urban areas and stagnating in rural areas. Rural employment has not bounced back to pre-recession levels. Rural counties had 750,000 fewer jobs in 2017 than they did in 2008, a drop of 3.5 percent over the nine-year period. Meanwhile urban areas saw a growth of 10% in these years and not only recovered all lost jobs, but added 7.8 million new jobs.

Rural areas also see exacerbations of national trends. The gender pay gap is higher in rural areas than urban areas. A Center for American Progress report found “While the wage gap for women overall stands at 80 cents for every dollar earned by men,” that gap “grows even larger when rural women are compared to men overall: Rural women who are full-time, year-round workers earn a mere 64 cents for every dollar earned by men overall. Even when looking solely at rural workers â€” who earn less than nonrural workers, regardless of gender â€” the gender wage gap is larger than that of the overall population, with rural women who are full-time, year-round workers earning just 76 cents for every dollar earned by rural men.” While racial diversity is low in the Adirondacks and northern New York, it should be pointed out that in rural areas with higher racial diversity, there’s also a significant disparity in wages of white people and people of color.

The Adirondack Park has not escaped the long-term trends of the last few decades that are reshaping, and in many ways redefining, rural and urban America. Rural America is seeing slow population loss and a stagnant economy, whereas urban areas are seeing population and economic gains. That said there remains disturbingly high numbers of people in urban areas who live in poverty and income inequality is vast.

In some ways, in the Adirondacks we have more than held our own against these national forces. We have some communities that are growing in Warren County, the Tri-Lakes, and within commuting distances to small cities that ring the Park. We also have communities in the Park’s interior that are shrinking in population. The retrenchment of population and employment to urban centers in the U.S. creates serious long-term challenges for the Adirondacks and other rural areas. Living in the Adirondacks remains a choice, whether one grew up here and chose to stay, or chose to move here. These choices are driven by economics as well as lifestyle, with each weighted according to individual preferences.

Across the Adirondacks in the decades ahead we may be at the beginning of a sustained period of mild population losses, felt more acutely in small interior towns, whereas the larger Park towns may continue to incrementally gain population. This will mimic what’s happening across upstate New York, where cities are actually growing, like Buffalo, Syracuse, and Ithaca, while most counties are losing population. As a scenic area surrounded by major metropolitan areas in the northeast U.S., the Adirondacks will also see some benefits from sustained high rates or tourism and second (or third or fourth) home development. The key challenge for Park leaders is to develop strategies and guide investments that will help the Adirondacks escape the worst impacts of the historic national economic and population retrenchment toward urban areas that is currently underway.