Far from a singular Adirondack Park or North Country trend, school enrollments across 57 counties outside of New York City had about 107,000 fewer students enrolled in the 2019-20 school year than were enrolled in 2011.

Many decry declining public school enrollment numbers as a uniquely Adirondack problem, but it’s a reality across New York State, Upstate and Downstate, driven by trends of an aging population, smaller families, lower birth rates, and young people delaying starting families until a much older age.

New York’s population has been stagnant for close to 40 years, hovering at around 19 million residents. While New York’s population has not grown significantly in total numbers, the composition of the state’s residents has not been static. In the last 40 years, the state’s population has shifted and today there are 1 million more New Yorkers over 65 years of age and 1 million fewer residents under the age of 18 than there was 40 years ago. That shift towards an older population impacts school enrollment numbers and is more pronounced in Upstate rural communities than in Downstate metropolitan communities.

In 2011, there were 2.71 million children enrolled in public schools across New York, including over 65,000 children enrolled in charter schools, with just over 1 million in New York City. At the close of the decade, there were 2.63 million students enrolled in public schools, with New York City enrollment up by nearly 28,000 students. By 2019, charter school enrollments had doubled to over 156,000 students throughout the state. The trend of slowly declining school enrollments outside of New York City is consistent with long-term findings in The Adirondack Park and Rural America report published last year by Protect the Adirondacks. 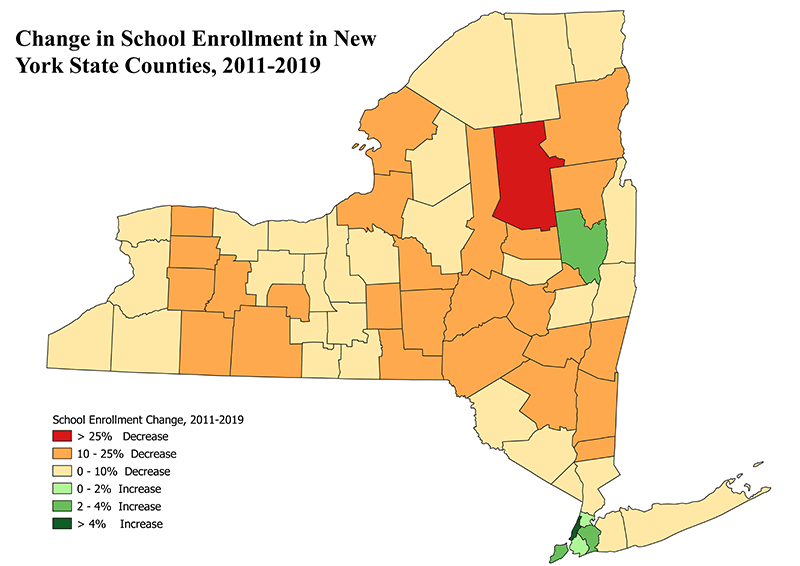 Across New York State, 57 out of 63 counties posted net losses in school enrollments over the last decade. Growth was seen in Saratoga County and the five counties in New York City.

Broome County (Binghamton) saw a loss of over 2,800. In his State of the State speech, Governor Cuomo touted that young people were moving to Buffalo, but Erie County saw a decline of over 5,000 total students in the past decade. Monroe County (Rochester) saw a drop of over 7,700. Onondaga County (Syracuse) saw a decline of over 3,700. Ontario County, one of the few Upstate New York counties that have experienced population growth in the last decade, still saw losses of over 1,200 students. Schenectady County dropped by over 4,000. Albany County was flat, dropping by a mere 620 students, out of an enrollment of over 39,000. Saratoga was the lone county outside of New York City to show gains in school enrollments, which topped 1,100 students.

Many school districts in the Adirondacks straddle the Blue Line, so it’s not an easy task to evaluate gains and losses through a purely Adirondack Park lens. The school districts that saw a tick up in the Adirondacks and North Country were Schroon Lake, Crown Point, the small elementary school in Putnam, and Long Lake (+3 students), while AuSable Valley was flat. On the edge of the Park, Beekmantown and Colton-Pierrepont saw gains.

Across New York State, outside of New York City, 82% of school districts saw enrollment declines from 2011 to 2019. No part of the state was left untouched. As we move into the election season in 2020, I’m sure that we’ll hear a political narrative that the declining school enrollment numbers in the Adirondacks are something unique to our region. The blame will undoubtedly focus on environmental protections. The reality is that New York’s overall population is stagnant and aging. As a result, the number of school age young people is slowly declining everywhere across the state, except New York City.