No major changes for Forest Rangers in the Adirondacks, State must do more

The current New York State budget being negotiated by Governor Kathy Hochul and the State Legislature contains significant new spending on a number of things, like $29 million for a new headquarters for the Adirondack Park Agency, and a new $30 million building for the Olympic Regional Development Authority at the North Creek Ski Bowl, yet funding for Forest Rangers in the Adirondack Park and across the state is flat.

Ranger staffing for the entire state is currently below historic levels of 130 positions and stands at around 124. The Department of Environmental Conservation (DEC) proposed budget calls for the status quo. Now, the 124 Rangers include Director, 1; Captains, 14; Lieutenants, 19; Rangers, 90. Among these 124 positions, there are 17 vacancies due to recent retirements, which means that there are 107 active positions, but two are mostly at desks in Albany, and Captains are not in the field that much. Subtract from the 107 positions that 10 Rangers are currently eligible for retirement, and another 15 will be eligible for retirement by 2024. The vacant positions and imminent retirements will reduce the ranks by 42 slots.

The budget passed last year funded a new Ranger Academy for 40 slots. This academy starts in May 2022 and runs for seven months until November. This academy will be split between the Wanakena Ranger School and the SUNY ESF Huntington Research Station and marks a departure from joint academies held with the Environmental Conservation Officers (ECOs). There are currently 43 candidates eligible for the academy, but it’s unlikely that all 40 slots will be filled. More than a dozen of the eligible candidates for the Ranger Academy are “dual” candidates who are also eligible for the new ECO academy, which is also happening this year. These individuals have a choice to make. At some point this spring, the final class for the Forest Ranger Academy will be set and, as mentioned above, it’s unlikely to have all 40 slots filled.

Given that active Ranger levels are around 107 with 25 retirements looming, even a total graduating class of 40 new Rangers would not materially boost Ranger numbers but hold them steady. If the state is to get serious about boosting Ranger numbers, it will have to hold new academies in successive years or alternating years for several years to come.

Eligible candidates for the Ranger Academy have to pass the state’s relevant Ranger 1 Civil Service Exam, which is not regularly provided. Those that pass the exam must next pass a background check and a physical fitness exam. Not all people recruited for the Civil Service exam pass that exam, and not all who pass the exam pass the background check and physical fitness test. Then, of course, not all individuals who enter the academy graduate.

The Forest Rangers have primary responsibility for DEC’s care, custody and control of five million acres of State-owned land and conservation easements across New York, the vast majority of which is in the Adirondack Park. Today the average Forest Ranger is responsible for patrolling 53,752 acres. In 1970, it was 28,516 acres. There has been a major increase in public use, and the number of search and rescue missions has increased twofold.

Protect the Adirondacks believes it is essential to increase the number of Forest Rangers and other personnel, such as Assistant Forest Rangers and backcountry stewards, to respond to high public recreational use and natural resource protection pressures. The Forest Rangers need to be expanded to 175 minimum, if not doubled from current levels to 250, with a special focus on the High Peaks Wilderness in the Adirondacks and other hot spots in the Catskills. If there were more Rangers, then it would be wonderful to see Rangers doing trail work again. The deterioration of trails in the Adirondacks is partly due to the changes in the primary duties and overall shortage of Rangers. 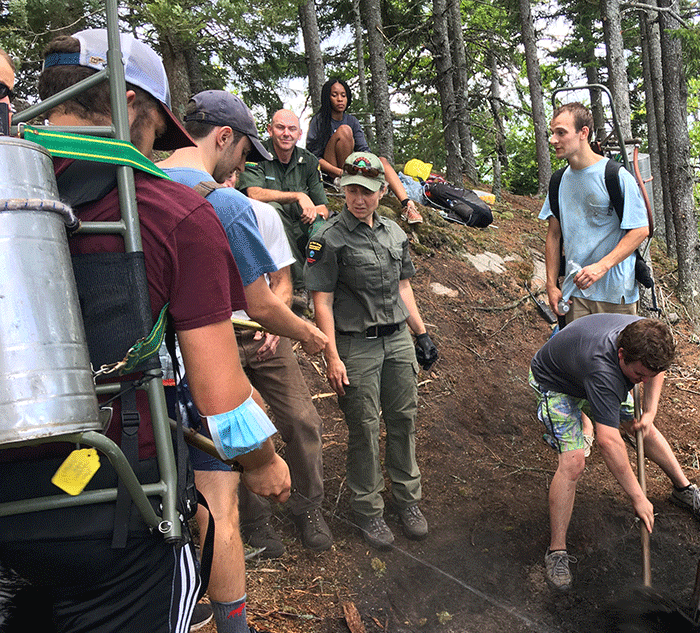 Stec: “The Forest Rangers in the Adirondacks. As you know my father is a retired Ranger and back when I was a kid and the Governor was Mario Cuomo we had about the same number of Rangers, the total Rangers in the state, as we do today, a number around 130. However since the inception of the Adirondack Park, we’ve added 350,000 acres to the Forest Preserve, and as everyone knows due to social media and how cool the Adirondacks are, we’ve had a significant increase over the last decade in hikers and associated activity for the Rangers, and what goes with that. I heard your answer to Senator Hinchey’s questions earlier and I appreciate her appreciation of the Forest Rangers. Is there a plan increase the Rangers in the High Peaks and I’d be curious, I know you’re having, you know, I think you’re having a lot of retention/replacement, a lot of these classes are going towards attrition, but are we going to have an actual increase Rangers in the High Peaks?”

Seggos: “The answer is yes. This class should increase the overall number significantly and, of course, the High Peaks is where you have most of the action, most of the rescues most of the incidents, and, I’m working closely with the division’s leadership to make sure that we have the right number of Rangers up there. It’s obviously complicated, in some cases, to orchestrate a transition from one home to another, but from an institutional perspective we need to make sure we have that force staffed up accordingly in the High Peaks.”

Stec: “In addition to that, as you know, there’s been a long history with the Rangers. They were considered Police Officers, then they weren’t considered Police Officers. I know a few years ago there was consideration about merging their title with the ECOs. I don’t want to get into that, but the Rangers back in 2006 became Police Officers again and their level of responsibility and training has certainly increased over the years and obviously, as you’re aware, that their use in particular in the Adirondacks, has greatly increased. Has there been, is there going to be movement on a salary grade increase for our Forest Rangers? I know that this concerns about compression and competition with the other agencies. I remember when my dad was a Ranger, they made a lot less money than State Troopers did, but I know there’s also a compression issue with backfilling or promoting Rangers and Rangers not wanting to take jobs because of, you know, the compression of the pay scale. So is that going to get addressed soon?”

Seggos: “Well, I’d have to defer to the Division of Budget and GOER [Governor’s Office of Employee Relations], which handles much of the collective bargaining. We would, we would weigh in as they need our information. We certainly have an interest in making sure we have a good retention policy here. Some of that is under my control, some of it’s not, and I would leave that to the next time that the Rangers are taken up under collective bargaining.”

Stec: Ok, so am I correct to assume that they have a strong case, that I probably inadequately laid out?

Seggos: “I couldn’t, I couldn’t tell you one way of the other. I know that we are an attractive agency. We do have a good package. We have an attractive career for anyone who wants to become a Ranger. In some cases, in my view, it’s at least as competitive, if not more so, when you take everything into account, than what the troopers get. But I understand basic pay and other issues need to be taken into account and that’s something that, that collective bargaining will take up.”

Stec’s questions were generally on the mark, but he did not come armed with facts and figures and let Seggos skate with his answers. The only commitment Stec got was more Rangers for the High Peaks. The State Police website says effective April 1, 2021, $58,443 was the starting Trooper salary (during Academy training and first year), then went to $82,677, after the first year, and $98,315, after five years. The DEC website says that “the current hiring rate is $59,448” for a Forest Ranger. Career Rangers who I looked up on “See ThroughNY,” who are eligible to retire, were at $70,735 and Rangers who have been on the job for years were between $57,000 and $70,000. The Ranger salaries do not count overtime, which is significant in some cases, and can add tens of thousands of dollars to annual pay, but does come at a cost for working Rangers to the bone and stressing family life.

As the Ranger staff numbers above show, given pending retirements and given the uncertain size of the Ranger Academy graduating class in November 2022, it’s highly unlikely that the Ranger force will see any significant increase in total numbers. As to a greater emphasis on the High Peaks, that could happen with internal management changes, but, again, that too is unclear. One has to wonder with the small current Ranger force that is working right now where new Rangers for the High Peaks will come from this summer hiking season. The reality is that the current level of around 107 active Forest Rangers will not see meaningful relief until late this fall. And that relief will be short lived without new Ranger Academies in 2023 and beyond given the number of Rangers expected to retire in 2023.

If DEC Commissioner Seggos and the Hochul Administration are serious about boosting Ranger numbers, it will require a major change in how the State of New York, and all who are concerned about Forest Rangers and the Forest Preserve, go about recruiting people from diverse backgrounds to take the Ranger 1 Civil Service exam when it’s offered and to pursue Ranger Academies when they’re held. It did not help that Governor Hochul vetoed a bill regarding Ranger retirements to provide recruitment incentives. Fixing the problems facing Forest Rangers is not a one budget fix, but will take years, and requires a new vision for the Ranger’s role in the Forest Preserve, as well as a new commitment to rebuilding the Forest Rangers corp by Governor Hochul and Commissioner Seggos.