Peter Hornbeck, founder of Hornbeck Boats and master boatbuilder of lightweight canoes and kayaks with a distinctive red stripe below the gunwales, famous throughout the Adirondacks and beyond, died quietly and unexpectedly at his home in Olmstedville on December 26, 2020, after a hike with his family. Pete was a founding Board member of Protect the Adirondacks since 2009 and served on the Board of the Residents’ Committee to Protect the Adirondacks (RCPA) before that from 1993 to 2009, serving eight years as the Chair. Pete was an unwavering advocate for the public Forest Preserve, especially on the need for more Wilderness lands in the Adirondack Park. Pete died at 77 years old.

Click here to read Pete’s full obituary. Click here for a piece about Pete in the Adirondack Daily Enterprise. 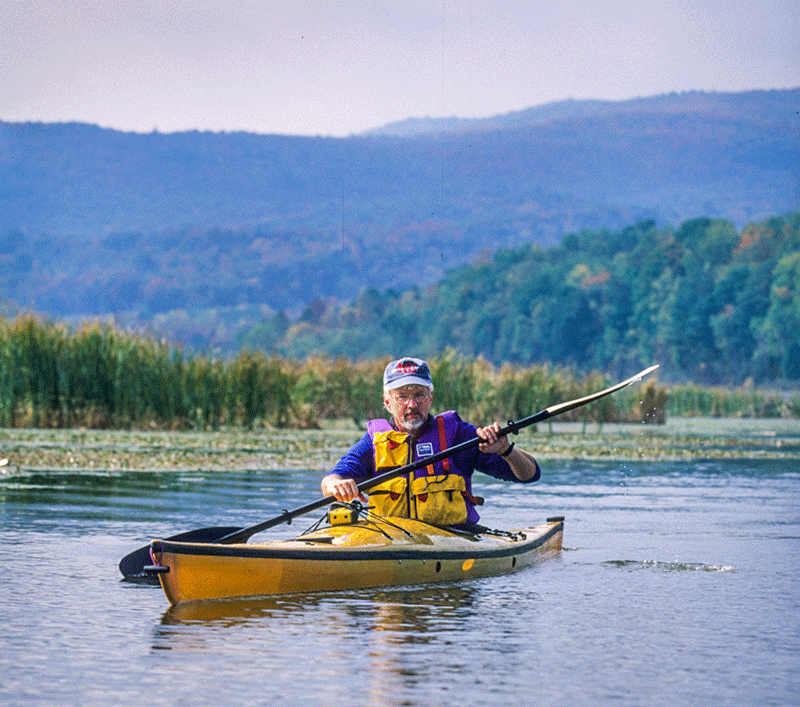 As Pete told his Adirondack story, he hitchhiked to the Adirondacks from western New York, when he was a teenager. He talked of walking on the side of Route 12 north of Utica, with a pack on his back, his thumb out, and a Lucky Strike dangling from his lips, and seeing the mountains of the Adirondacks in the distance and falling in love with the place. Service in the Army and college in Buffalo delayed his plans to get to the Park, but Pete and his wife Ann were both school teachers and made the move to the Adirondacks in 1969. Ann got a job in Minerva teaching social studies and American History and Pete got a job as a elementary teacher nearby in Johnsburg. Pete was a popular teacher, where his 3rd and 6th graders always enjoyed correcting his spelling as he wrote out lessons on the chalkboard.

Pete was a great advocate for the Forest Preserve and Wilderness. He was a strong supporter of state land purchases to expand the public Forest Preserve. But the thing that he most cherished was Wilderness. He loved the wild, motorless waters of the Adirondacks. He took a lead role when the RCPA organized the Canoe-In for Wilderness at Little Tupper Lake in 1998. People in over 250 canoes and kayaks and other motorless watercraft joined in a protest at newly purchased Little Tupper Lake, which at that time had not yet been classified. With passion and good humor, he addressed the crowd that day. Pete talked about the connection between his business, and other businesses, and a wild Adirondacks, and about how the Forest Preserve was the greatest economic asset this region had. That event was an important milestone in the classification and creation of the William C. Whitney Wilderness Area. In 2018, Pete was there again, with Ann, his daughter Leigh, and his two grandsons in their specially made 6- and 8-foot Hornbecks, as PROTECT organized the Canoe-In for a Motorless Weller Pond.

Pete talking with reporters at the 1998 Canoe-In for Wilderness at Little Tupper Lake.

Pete retired from schoolteaching to make boats fulltime. He had suffered a heart attack as a relatively young man and said that as he lay in his hospital bed hooked up to tubes and monitors, he thought about the fact that he had not yet perfected boatmaking. Starting in 1971, Pete had experimented out of his garage with how to make lightweight canoes in the spirit of famed 19th century Adirondack boatbuilder John Henry Rushton of Canton, who had made the Sairy Gamp, among many other boats, which was used by George Washington Sears to paddle far and wide across the Adirondacks, trips memorialized in a series of popular articles written under the pen name Nessmuk.

Pete studied the measurements and design of Rushton’s boat at the Adirondack Museum and used them to create a line he called Lost Pond Boats because they were light enough to carry into Lost Pond. The name Lost Pond Boats never took, and “Hornbecks” became known far and wide, growing in popularity because they were extremely lightweight, incredibly durable, easy to turn on twisting Adirondack rivers, great for fishing, and easy to portage or haul over a beaver dam. The photographer Carl Heilman was an early Hornbeck devotee, and these boats featured prominently in many of Carl’s classic Adirondack landscapes. Hornbecks were made first with Kevlar and then with carbon fiber, which created a 10-foot boat at 12 pounds in weight, ideal for pond-hopping in the Adirondacks. Slowly, the business took off, additional boatbuilders were added, buildings were built, and Pete branched out to guideboats, kayaks, and different lines of solo and tandem canoes, the newest being the New Tricks series. Over the years, Pete liked to say that he was “the biggest industrialist in Olmstedville.” 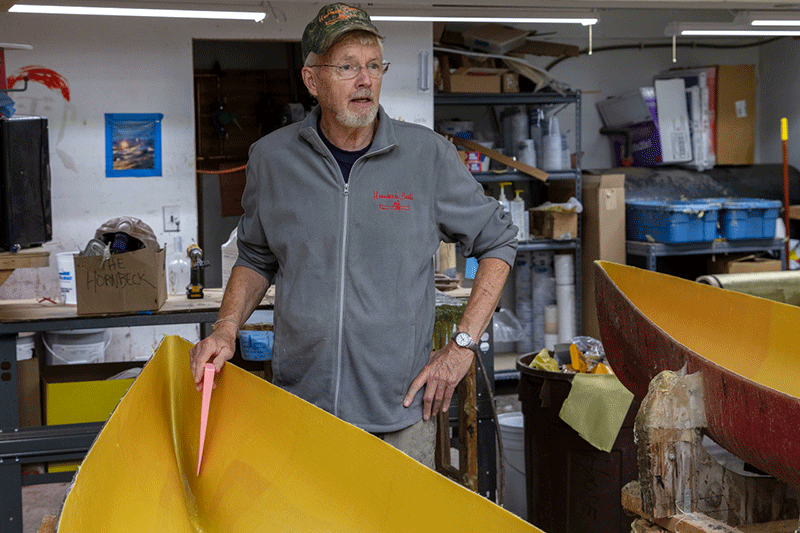 The masterbuilder in his shop.

Early on in the life of Hornbeck Boats, Pete ran ads picturing himself in one of his boats. He said that in those years he sold boats mostly to old, skinny, gray-haired men. Then he started running ads picturing his wife Ann, with her bright red hair, paddling a Hornbeck, and he said he then started selling boats mostly to women. He generously donated boats to dozens of organizations to raffle or auction, raising untold thousands. Evelyn Greene, who has put more miles on her Hornbeck than just about anybody, said of Pete “I will always thank him for making our wild adventures possible, without needing the help of a man or other person younger and/or stronger than we. He gave us Freedom!”

Weekends at Hornbeck Boats were festive. Pete was fond of saying that all the world came through his gates. A collection of buildings housed workshops for the molding of boat hulls, woodworking, storage, a showroom and office, all centered around picnic tables and chairs. There was a small pond where people tried paddling various boats, which often branched out to fishing and swimming. Kids loved the place. Many people stopped in for repairs, and many others simply to visit. All types of people from everywhere showed up and they all took a shine to Pete. Early in his Kevlar boat-making days a customer asked if Kevlar could really stop a bullet. Pete said yes. The guy said he had a rifle in his truck and asked if Pete wanted to stand behind his words. Pete set up a scrap of Kevlar on some sawhorses, and the guy the shot it clean through. Pete was also part marriage counselor. He’d watch a couple paddle together trying out one of his tandems, arguing about who should paddle on which side, and who should steer, and then he’d gently say “You two may want to try each paddling your own solo boat.” 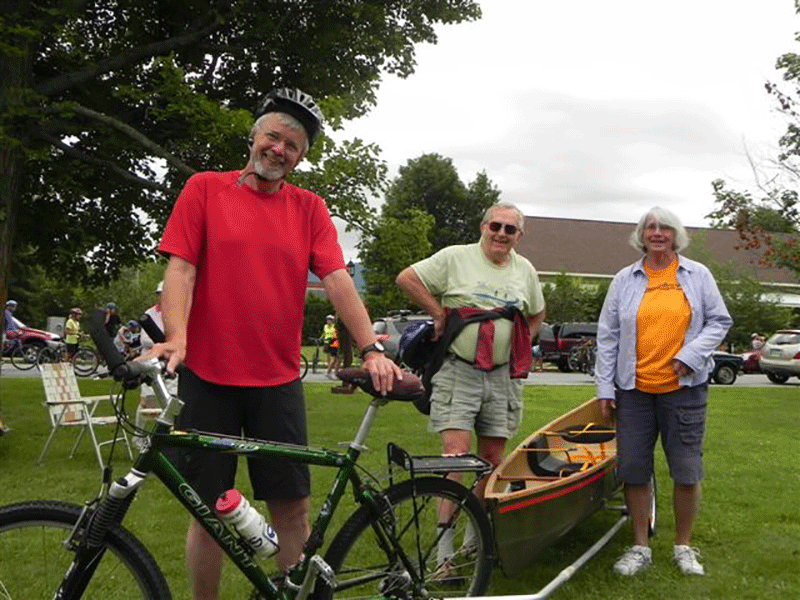 Pete readying to ride in 2019, with Hornbeck boat in tow, in the annual Ride for the River event of the AuSable River Association.

For years, Protect the Adirondacks held its day-long Conservation Advocacy Committee meetings on Saturdays in Pete’s painting studio over his showroom at Hornbeck Boats. We’d crowd in to hash out our positions and responses to the pressing matters of the day. Pete would be in and out of the meeting, his words noted by all. At lunch, he’d buy everybody pizza, and at the end of the day, as the meeting broke up, PROTECT’s leaders would mingle with customers in the Hornbeck social hour, with Pete often sitting and holding court as he slowly puffed on a cigar.

When the RCPA ran a certification program for sustainable forestry in the 1990s-2000s, Pete was one of a pool of certified landowners. He said he was on a first name basis with many of the trees on his property and would not be cutting any, though he worked up a forest management plan. Though the program ended, the certification sign still hangs there today and reads “Hornbeckistan.”

Pete did things his own way, whether following his dream to live in the Adirondacks, or building boats, or how he spent his time. Pete was easy to find at the shop, and many former Johnsburg students would stop in. He talked of one student who always stopped in when he came back to visit his parents. The kid had gone on to college and become a chemical engineer and just loved it. He worked for a big company in Buffalo and lived in a Buffalo suburb, near where Pete had grown up. “We switched lives,” Pete said. “That kid could not wait to get the hell out of the Adirondacks, and really couldn’t understand why I love it so much up here. Just like I could not wait to get the hell out of Buffalo and I can’t understand why he’d ever want to live there.”

Over the last 20 years, Pete regularly camped in the St. Regis Canoe Area, and other wild places, with a group of old men camping buddies that was humorously called the League of Extraordinary Adirondack Gentleman, which included Patrick Sisti and Howard Amann, who died in recent years, the photographer and medical doctor Dan Way, Bill McKibben, Tom Curley, and Mike Prescott, among others. In these last few years, as his boatmaking dropped off, Pete painted a lot, and completed many watercolor landscapes.

In many ways, Pete’s lasting legacy beyond the love of his family, beyond the stands he took to protect the Adirondacks, is the thousands of Hornbecks paddled every year. Hornbeck Boats are everywhere; they are widely used and loved. They are boats conceived in Wilderness, and they are boats that honor the wild Adirondack landscape. 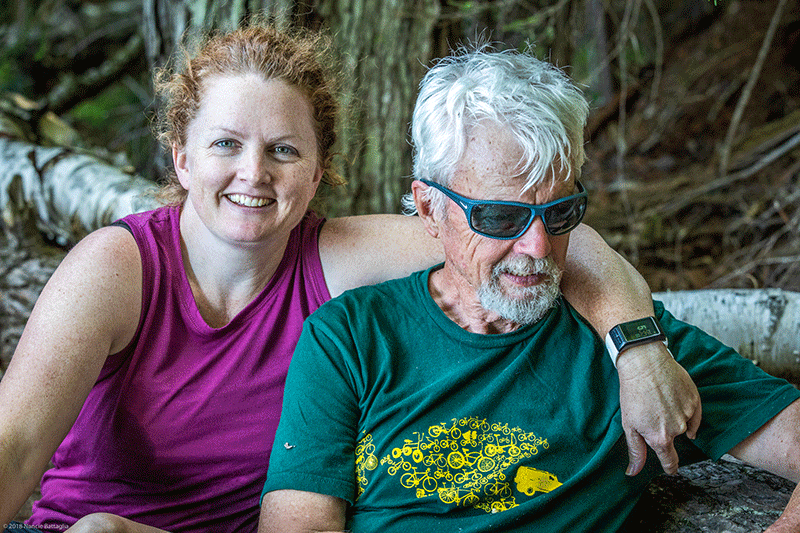 Pete with his daughter Leigh in recent years.

Pete is survived by his wife Ann, daughter Leigh, a noted reporter with the Times Union, and his son-in-law Josh Trombley, who took over Hornbeck Boats in recent years, and two grandsons Rushton and Devlin, who Pete absolutely adored, and a pack of wild dogs.