Protect the Adirondacks has a number of concerns about the proposed Adirondack Park Agency (APA) project 2018-123 submitted by New York Land & Lakes Development around Woodward Lake in the southern Adirondacks in the towns of Northampton and Mayfield. This project is the first to undergo review according to the APA’s new Large-scale Subdivision Application. This project appears to be a textbook example of how to fragment and degrade an intact forest system.

The project involves the development of the 1,040 acres that surrounds the 129-acre Woodward Lake, roughly 400 acres in Rural Use and 640 acres in Resource Management. The project plans 32 new building lots, creation of 1 new lot for a pre-existing building, 1 common lot and a new 2,000-foot road. Thirty lots will be located in Rural Use areas and 2 new lots will be located in Resource Management areas.

The Woodward Lake project is not a conservation subdivision, which is the clear preference of the APA Large-scale Subdivision Application procedures that were provided to the developer more than two years ago. This application must be redesigned as a conservation subdivision or sent for a formal adjudicatory public hearing. This 1,169-acre tract has large portions that are simply not suitable for residential development. This project exceeds the development capacity of this area.

Protect the Adirondacks contends that, for reasons that follow, the project alternative subject of the Agency’s December 14th completion notice cannot be approved under the applicable criteria in the APA Act and must be the subject of an adjudicatory hearing. This project, the first to be reviewed according to the Agency’s new Large-scale Subdivision Application, is a textbook example of how to fragment and degrade an intact forest ecosystem.

Click here to read PROTECT’s letter to the APA. 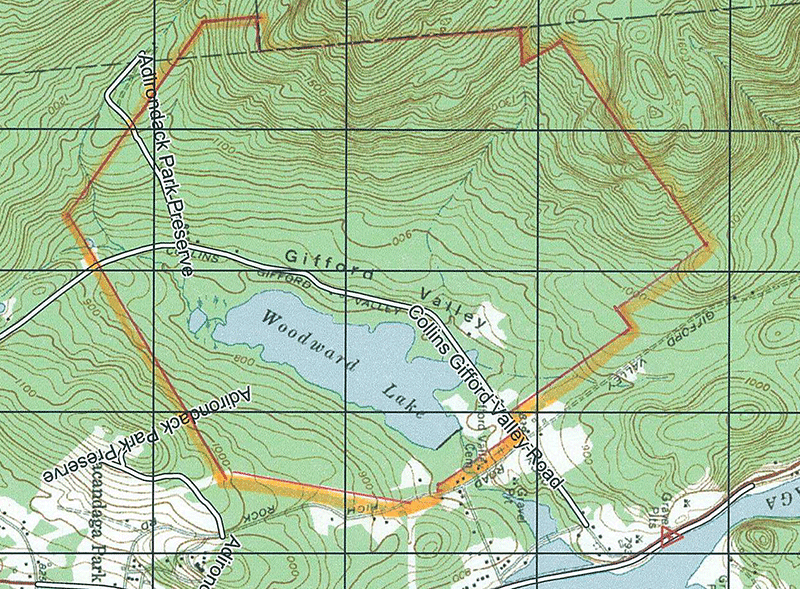 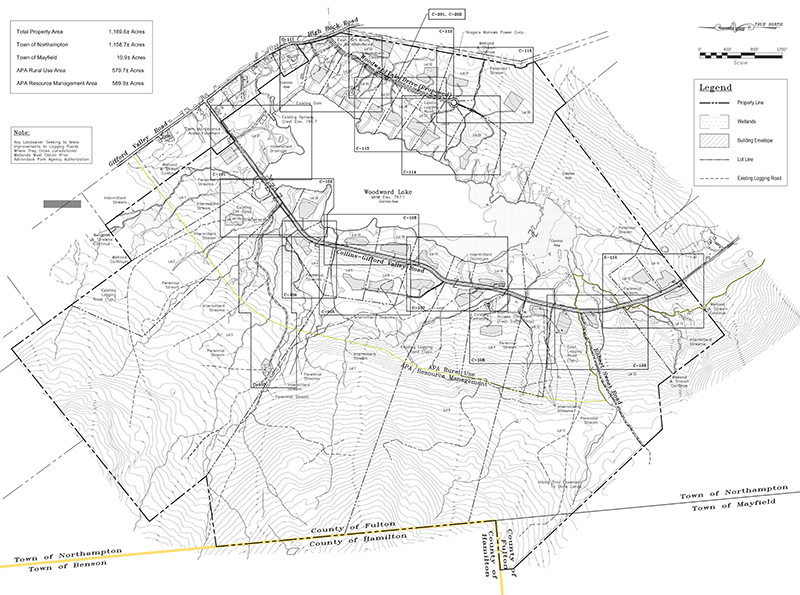 The developer claims that it will somehow extinguish 34 principal building rights, 12 on Resource Management lands and 22 in Rural Use, while pursuing a permit for 36 principal buildings. This statement is inaccurate. There are no “development rights” under the APA Act. The zoning densities that the developer used are the maximum mathematically available under the APA Land Use and Development Plan (LUDP). Under the LUDP the allowable principal buildings are not automatically assigned to a parcel of land. The total number of buildings authorized reflects the number allowable after a comprehensive APA review. Far from “extinguishing” development rights, the developer is seeking approval at a level of development beyond what is appropriate for this tract.

This 1,169 acre tract has a number of features, such as a large waterbody, wetlands, streams and steep slopes, which the APA has always considered constraints on development. An analysis that removed all of the undevelopable land from the tract found that 129 acres of Woodward Lake, 159.56 acres wetlands, 9.18 miles of streams, which with 50-foot-wide protected buffers total 55.64 acres, 450 acres of lands with steep slopes of 15% or greater, totaling more than half of this tract. This means that over half of this tract is land unsuitable for development. Much the remaining lands are not much better. This magnifies the problems with this tract and shows that the vast majority of the Woodward Lake development site is not suitable for development. The reality is that this tract can support residential development only at a level far less than the 36 principal building rights sought by the developer.

Preferred Design: The project seeks to wrap Woodward Lake with 32 new buildings. Over the last two years, the project has failed to advance from a standard project that rings an Adirondack lake with residential housing to a subdivision that utilizes conservation design. The original proposal from August 2018, provided a concept plan that sought to ring Woodward Lake with lots for 12 shoreline houses and 13 additional building lots. The final plan, submitted more than two years later in 2020, seeks approval for 13 shoreline houses and 19 additional housing lots.

The applicant has sought to utilize conventional subdivision practices that create piano-key style, shoulder-to-shoulder building lots around Woodward Lake. The 19 building lots that are not arrayed on the lakeshore are all in the watershed and will include lake access. The applicant has failed to undertake any form of serious conservation subdivision design. It’s unclear whether it’s the fault of the developer or a problem with the APA’s new Large-scale Subdivision Application process, but the end result is that after two years the preferred option for development is not a conservation subdivision that will protect the intact forest system on these lands.

Ecological Impact Zone Analysis: Each dwelling in a forested area has an ecological effect zone extending far beyond the immediate disturbed area of the site. For birds, one study concluded it is 200 meters or 12.6 ha (31 acres) (Glennon, M.J. and Kretser, H.E., Size of the ecological effect zone associated with exurban development in the Adirondack Park, NY, Landscape and Urban Planning 112 [2013] 10-17). For small mammals such as marten, fisher, fox and coyote, it is between 200 and 250 m (Danks, E.F., Assessment of the impact of residential development on mammal communities in the Adirondacks, New York, M.S. Thesis, SUNY College of Environmental Science and Forestry, Syracuse [2008]). Siting residential development so that ecological effect zones overlap results in a substantially lower total disturbance and concomitant benefits to the conservation of biodiversity. 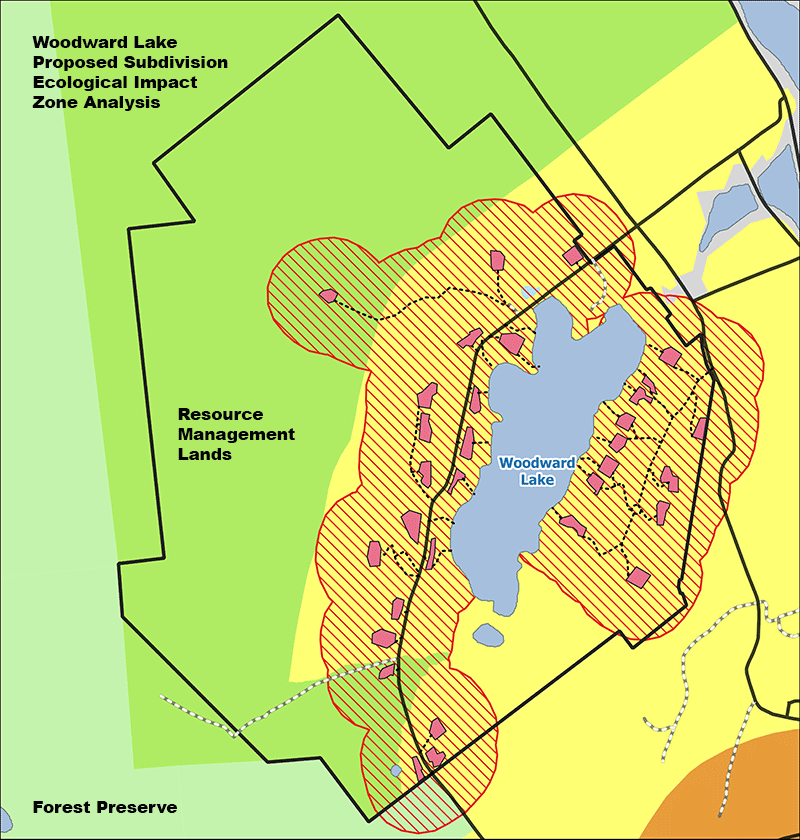 Ecological impact zone analysis should be a standard analytical tool used by the APA. We note that the applicant undertook this analysis in October 2020 and found that the proposed development will negatively impact 629.5 acres, 54% of the total tract. The remaining open space is cut up between two major areas on the tract, fragmenting open space.

It’s important to note that the ecological impact zone analysis also shows considerable areas will be impacted on adjoining private lands, as well as the public Forest Preserve. Negative ecological impacts from development do not stop at the property boundary as ecological changes caused by residential development will radiate out into the surrounding forest and across property lines. The applicant did not extend its ecological impact analysis fully to areas outside the project boundary. 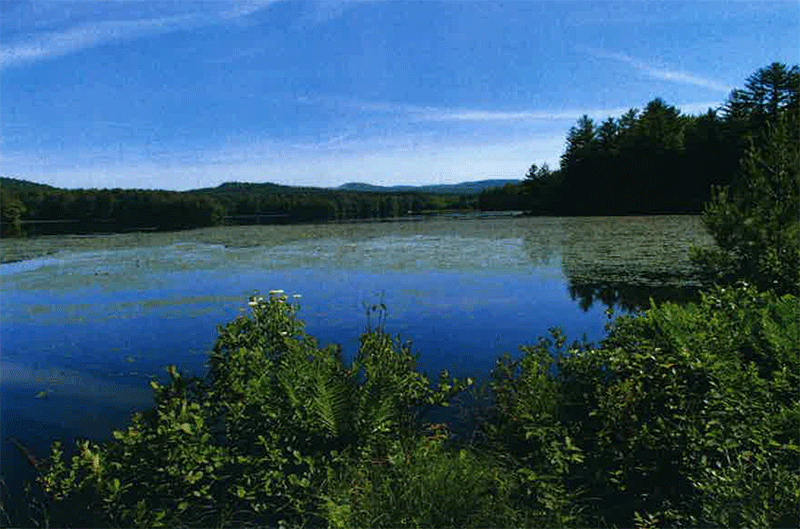 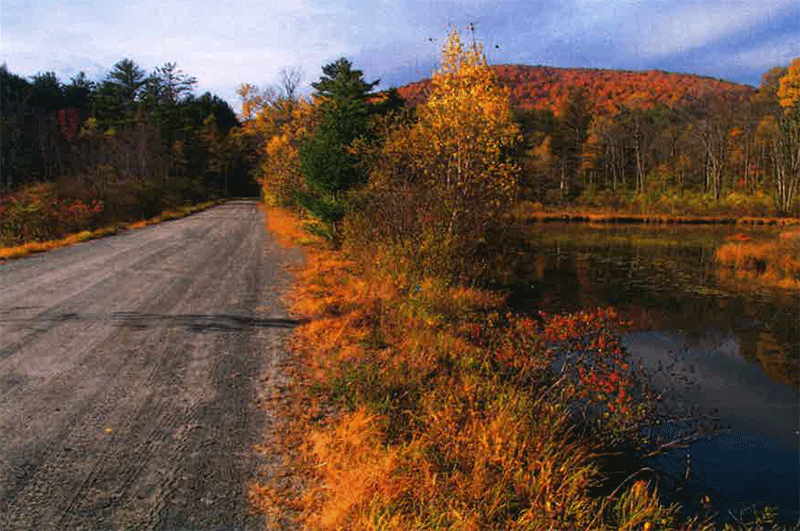 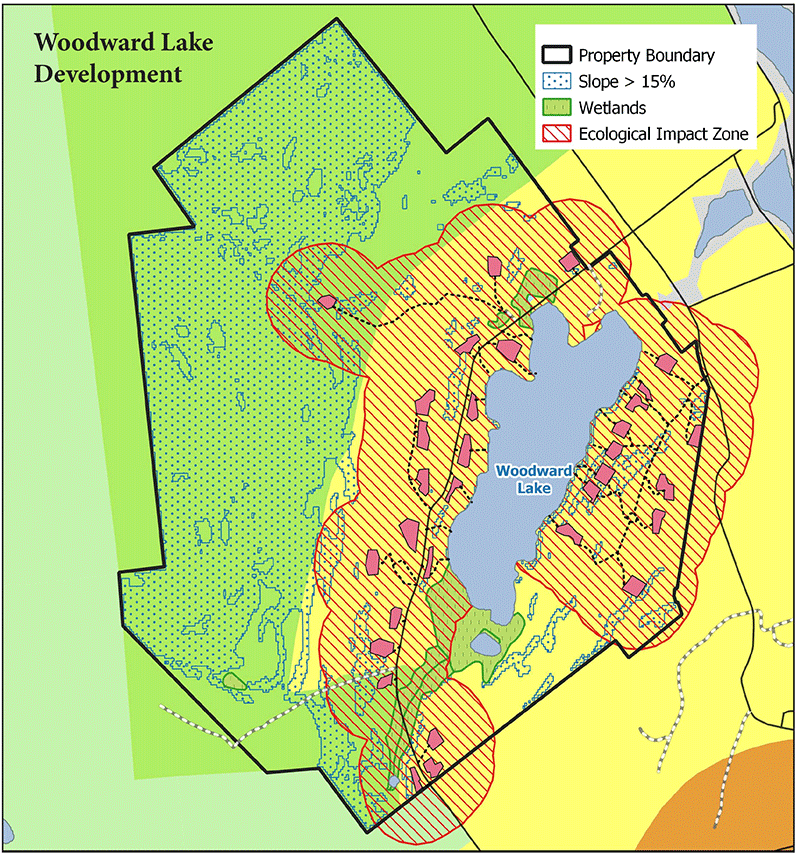 More than half of this tract is undevelopable land due to steep slopes, wetlands, and streams.

Wetlands: The Woodward Lake tract has 159 acres of wetlands. Proposed lots 2 and 5 as well as a vast area of the “common lot” appear to be compromised by wetlands. We note that 10% of the 1,040 acres are lands with wetlands that should not be developed. 9.2 miles of stream corridors are also on the tract, which are not appropriate for development. 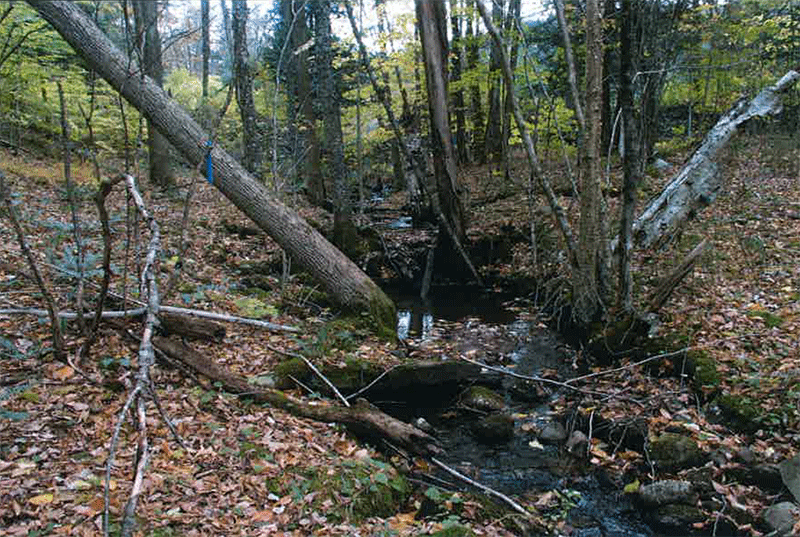 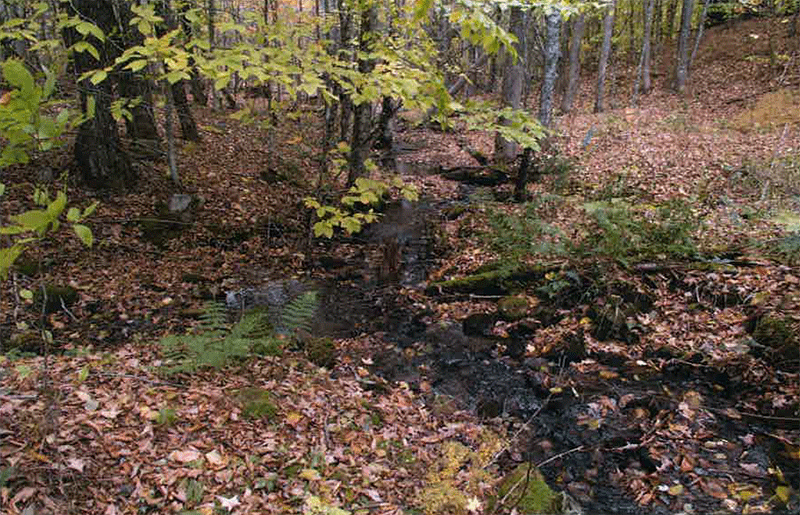 The Woodward Lake tract has over 9 miles of streams, which hampers development opportunities.

In the Town of Meredith, Delaware County, New York Land & Lakes subdivided 1,100 acres into 35 lots, ranging from 5 – 147 acres (an average of 31.4 acres). These numbers are similar to the project at Woodward Lake. Despite the fact that this project is located in the very special Adirondack Park, and supposedly protected from traditional development that does not address environmental impacts by virtue of the APA Act, and despite the new APA Large-scale Subdivision Application process, the proposed Woodward Lake subdivision appears to be business as usual for New York Land & Lakes, little different than from other areas in New York.

The full description for Resource Management is here:

The basic purposes and objectives of resource management areas are to protect the delicate physical and biological resources, encourage proper and economic management of forest, agricultural and recreational resources and preserve the open spaces that are essential and basic to the unique character of the park. Another objective of these areas is to prevent strip development along major travel corridors in order to enhance the aesthetic and economic benefits derived from a park atmosphere along these corridors.

Finally, resource management areas will allow for residential development on substantial acreages or in small clusters on carefully selected and well designed sites.

Resource Management lands are supposed to be the most highly regulated private lands in the Adirondack Park.

The full description for Rural Use is here:

The basic purpose and objective of rural use areas is to provide for and encourage those rural land uses that are consistent and compatible with the relatively low tolerance of the areas’ natural resources and the preservation of the open spaces that are essential and basic to the unique character of the park. Another objective of rural use areas is to prevent strip development along major travel corridors in order to enhance the aesthetic and economic benefit derived from a park atmosphere along these corridors.

The APA Act states Rural Use and Resource Management areas “provide the essential open space atmosphere that characterizes the park.” The proposed development of lands around Woodward Lake will undermine the basic purposes of these areas.

Climate Change Impacts: Under the 2019 Climate Leadership and Community Protection Act (CLCPA), state agencies are mandated to weigh the impact of climate change in their decisions. Section 7(2) of CLCPA requires all State agencies to determine whether their administrative approvals are consistent with the attainment of, or will interfere with the attainment of, the statewide greenhouse gas emission limits in ECL Article 75. If inconsistent, they are required to explain why, and to identify alternatives or mitigation measures. In this case, the directive to the APA from CLCPA is to assess the impacts of forest clearing and climate change impacts from possibly adding 32 new buildings and a new 2000-foot-long road.

In his book “Climate Change in the Adirondacks” (2010) scientist Jerry Jenkins calculated that construction of a new 2,060-square-foot house creates a 4 ton carbon debt. (p 139) Even more important is the carbon debt that Jenkins calculates from the clearing of forest land for a building lot. Jenkins assesses the loss of carbon storage and the release of carbon into the atmosphere from forest clearing. Jenkins wrote “Clearing an acre of forest creates a debt of 257 tons.” By our analysis, this project seeks to clear at least one acre to build the 2,000-foot road and will clear 1.5 acres for each of the 32 buildings and driveways, totaling 49 acres, which will lead this 1,169 acre tract to produce a carbon debt of 12,593 tons compared to where the tract is today.