The Adirondack Park Agency today released its long awaited and much discussed proposal for the classification of 20,543 acres of recently purchased public Forest Preserve lands around the Boreas Ponds in North Hudson, Essex County in the Adirondack Park. The APA held a public hearing on four classification options at the end of 2016. The APA will take up this proposal at its monthly meeting to be held on February 1-2, 2018 at its headquarters in Ray Brook. This decision is part of a Forest Preserve classification package that totals over 54,000 acres. Over 10,000 public comments were received during this hearing.

The APA staff is recommending “Alternative 2B” which largely uses the Gulf Brook Roads as the Wilderness-Wild Forest boundary on the Boreas Pond tract. Under state law, Forest Preserve lands classified as Wilderness allow primitive and basic recreational opportunities, such as hiking, canoe paddling or cross-country skiing. Wild Forest areas allow for use of bicycles as well as snowmobiles and motor vehicles. Alternative 2B recommends 11,412 acres for classification as Wilderness and 9,118 acres proposed for Wild Forest. 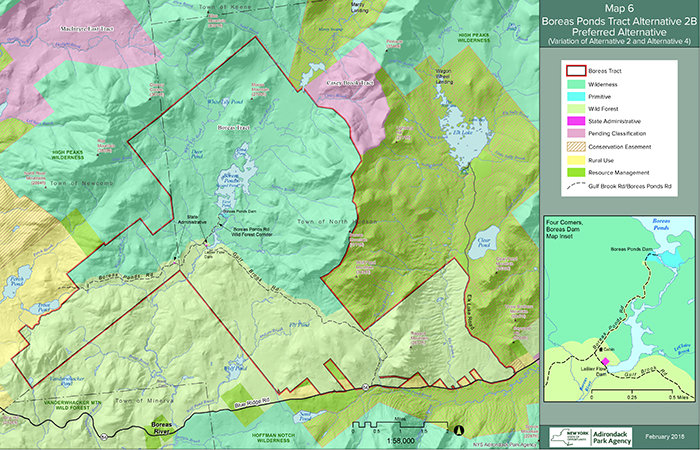 This is the map published by the APA. The two “pending classification” tracts are also being proposed for Wilderness. This map details the Wilderness-Wild Forest boundary line, which runs just north of the Gulf Brook Road.

Public uses on these lands will be determined through Unit Management Plans (UMPs). The Wilderness lands around the Boreas Ponds will be added to the High Peaks Wilderness and the Wild Forest lands will be added to the Vanderwhacker Mountain Wild Forest area. Both UMPs are expected to be revised in the summer of 2018. Under this classification, public motor vehicle use could be as close as Â¼ mile to the shoreline of Boreas Ponds. Under this classification, the Gulf Brook Road could be retained as a Forest Preserve road open to bicycles and motor vehicles and used as a snowmobile trail. The Wilderness area around the Boreas Ponds limits public uses to canoes, kayaks or rowboats, hiking, cross-country skiing and camping.

This decision is a net gain for the Forest Preserve, for Wilderness, and for the Adirondack Park. Over the next several decades, the trees along the Boreas shoreline will grow taller and bigger. The hillsides and mountainsides will see the forest canopy expand and thicken like clasped fingers. Each year across the 11,400 acres around Boreas Ponds wild nature will ceaselessly work unimpeded by humans to reclaim the forests, eat away the roads, overgrow the log landings, bury the culverts, and transform the area into a Wilderness.

Under the APA staff recommendation Wild Forest lands end Â¼ mile from the Boreas Ponds. The APA is proposing a Primitive Corridor for administrative purposes to maintain the Boreas Ponds dam. There are no other Primitive Corridors in the areas designated for Wilderness classification. There will also be two small State Administrative areas along the Gulf Brook Road in the Wild Forest lands for the cabin at the 4 Corners that will likely be used as a caretakers cabin, similar to state cabins at Lake Colden, the Raquette River and Marcy Dam, and a small sand and gravel pit that will assist with road maintenance.

As a compromise, the proposed Boreas classification provides each side with their most important objectives, while also forcing each side to make concessions. There was clearly give and take. The most important objective from the environmental side was the classification of the Boreas Ponds as Wilderness. We wanted the highest protection that New York offers its public lands â€“ Wilderness â€“ and wanted to see the Boreas Ponds added to the High Peaks Wilderness area. The most important objective of local government and motorized recreation groups was retention of the Gulf Brook Road. They wanted motorized access as close to the ponds as possible. They also wanted a snowmobile trail routed through these lands that connected North Hudson to Newcomb/Minerva.

Many of the specific details of where parking lots will be located will be determined during public hearings for the UMPs. PROTECT will advocate to keep motorized uses as far away from the ponds as possible. We had advocated that public parking be located east of LeBiere Flow at least 1 mile from the Boreas Ponds.

The APA website also includes descriptions of all alternatives, a response document to the public comments, a draft Environmental Impact Statement, biological surveys, and a draft resolution. PROTECT plans to call on the APA to reject the Wild Forest corridor that will extend more than 1/2 mile into the Wilderness lands.