The APA has failed to comply with the Climate Leadership and Community Protection Act (CLCPA) in its current review of a 120-unit luxury housing and resort development in Jay by failing to assess the project’s potential greenhouse gas emissions.

Protect the Adirondacks has called upon the Adirondack Park Agency (APA) to include, as part of its permit application review, an evaluation of the direct and upstream greenhouse gas (GHG) emissions associated with the large-scale subdivision and resort complex proposed by Eric Stackman in the Town of Jay, Essex County. This project is currently under review and does not have a complete application. The APA has issued two Notices of Incomplete Application to the developer.

The 2019 Climate Leadership and Community Protection Act (CLCPA) requires all state agencies, “[i]n considering and issuing permits, licenses, and other administrative approvals and decisions,” to determine whether such action “will be inconsistent with or will interfere with the attainment of the statewide [GHG] emission limits” established in Article 75 of the Environmental Conservation Law (“ECL”), which details requirements under CLCPA.

In a review of the materials that Stackman has submitted there appears to be no GHG emission analysis for a proposed 120-unit subdivision. It also appears that the APA has failed to take any necessary steps to evaluate the project’s potential GHG emissions. Protect the Adirondacks first requested that the APA include a GHG emissions analysis as part of its review of the Stackman project in its comment letter dated December 3, 2021.

Protect the Adirondacks urges the APA either to request that the applicant provide an analysis of the project’s GHG emissions or confirm that the APA is conducting its own analysis of those emissions in order to evaluate compliance with the State’s GHG emission limits as required under the CLCPA. To date, we’ve seen no evidence that the APA is fulfilling its obligations under the CLCPA.

Click here to read a letter to APA on this matter from Protect the Adirondacks.

Here’s a concept map of the 120-unit Stackman project in Jay. 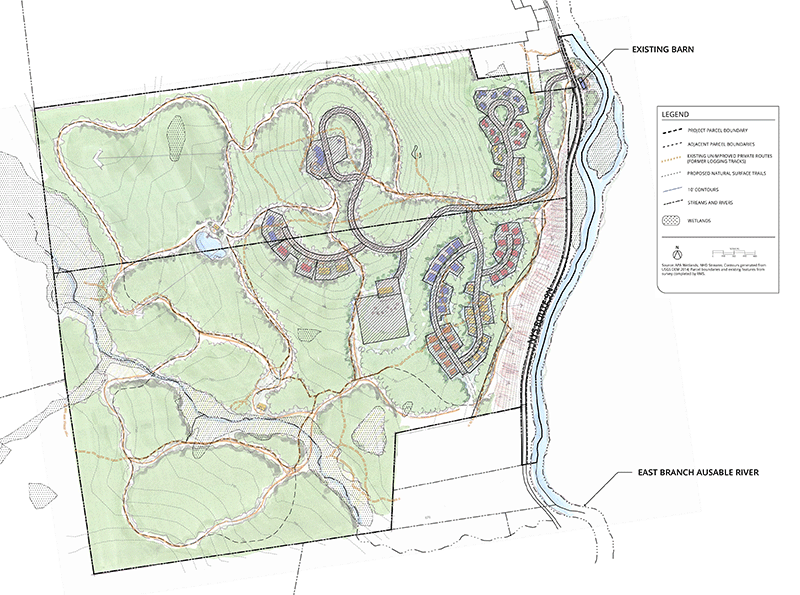 CLCPA mandates a GHG emissions analysis for all permit applications

Section 7(2) of the CLCPA imposes a mandatory duty on all State agencies to consider the GHG emissions associated with the issuance of a permit or approval:

Despite this clear direction, the APA has failed to evaluate GHG emissions as required by  the CLCPA.

Construction of a single 2,060-square-foot house creates a 4-ton carbon debt. Given the size and number of new homes in the Stackman development, new home construction will likely create a carbon debt of hundreds of tons.  In addition, clearing one acre of forest creates a carbon debt of 257 tons. Given that a substantial amount of forest clearing is proposed in the Stackman development for the purpose of new home and road construction, this activity will result in additional thousands of tons of carbon debt. 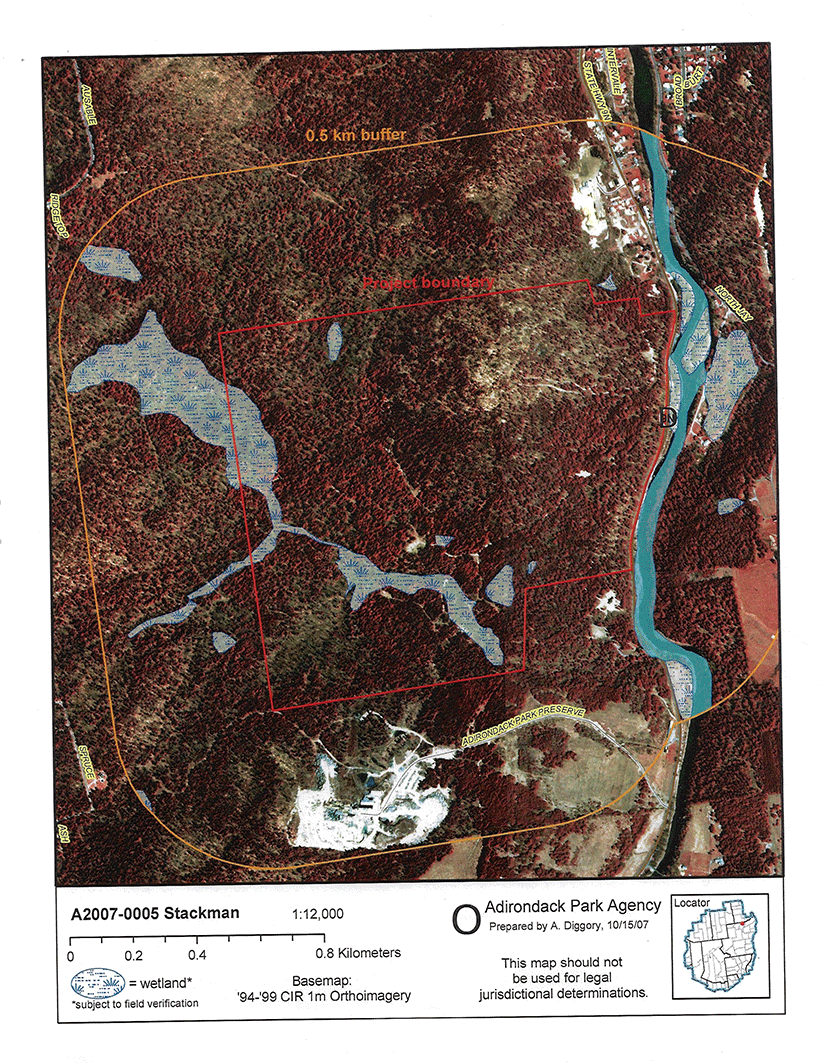 The clearing of forest and construction of new homes will result in a total carbon debt of thousands of tons. Added to this are the increases in GHG emissions resulting from motor vehicle use during construction, increased motor vehicle traffic from homeowners, and motor vehicle traffic from the general public visiting the project’s hotel, restaurant and spa. All of this must be taken into consideration by the APA in its review of this major subdivision and development. The CLCPA is crystal clear in imposing a duty on the APA to evaluate the GHG emissions associated with projects seeking an Agency permit. This information should be an important part of the APA’s decision on whether or not to approve this project.

After enactment of the CLCPA and promulgation of the GHG emissions limits, the Department of Environmental Conservation (DEC) denied two permit applications based on section 7(2) of the CLCPA: the applications by Danskammer Energy, LLC (Danskammer) and Astoria Gas Turbine Power, LLC (Astoria) for Clean Air Act Title V permits associated with construction and repowering of natural gas-fired electric generating plants. In denying the applications, DEC stated:

Click here for the DEC’s Notice of Denial of Title V Air Permit.

Based on its review of the projected direct and upstream GHG emissions associated with the Danskammer project, DEC concluded that it could not issue the requested permit:

As described further below . . . the Project would be inconsistent with or would interfere with theattainment of the Statewide [GHG] emission limits established in Article 75 of the [ECL]. Moreover, Danskammer has not demonstrated that the Project is justified as it has failed to show either a short term or long term reliability need for the Project. Nor has Danskammer identified adequate alternatives or GHG mitigation measures. Accordingly, given that the Department is unable to satisfy these elements required by Section 7(2) of the [CLCPA] the Department is compelled to deny the Title V Application.

As explained by DEC, “[t]his determination of inconsistency is based primarily on the fact that the Project would be a new source of a substantial amount of GHG emissions, including both direct and upstream GHG emissions . . . .” Of particular importance is the fact that DEC based its denial on GHG emissions analyses prepared by Danskammer, including “the responses to DEC’s three separate [Notices of Incomplete Applications] as submitted by the Applicant.”

DEC undertook a similar analysis in denying the Astoria application, concluding that denial of the application wasrequired because the Department was unable to satisfy the elements required by Section 7(2) of the CLCPA. Click here to see the DEC’s Notice of Denial of Title V Air Permit.

DEC has also recently issued draft guidance for its air permitting program requiring evaluation of a project’s direct and upstream GHG emissions as part of the permit review process:

To determine whether a given project is consistent with the requirements of CLCPA, the applicant must provide an objective analysis of the GHG and CO2e emissions from the project, that includes any upstream or downstream emissions known to be attributable to the project, including upstream emissions attributed to production, transmission, and use of fossil fuels or imported electricity. For projects that increase GHG emissions, the applicant should also provide a description of any proposed alternatives or GHG mitigation measures from the facility owner or operator. It is important to note that the CLCPA review is independent from other reviews . . . that may also be required for the permit action.

These actions by the DEC shows one state agency that is taking action based on its authority under CLCPA and one agency — the Adirondack Park Agency — that is not doing anything.