Many call David Sive the father of environmental law. His first major success was the Storm King lawsuit that helped block a power plant and highway project at one of the most beautiful sections of the west shore of the Hudson River. In the Adirondacks, he provided legal representation to local landowners who organized to resist the Horizon and Ton-Da-Lay mega-resorts in the late 1960s. In many ways, he helped pioneer the field of environmental law. 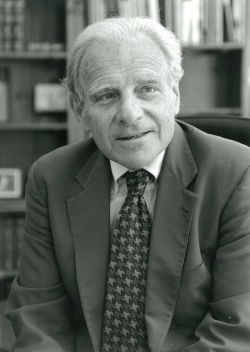 He was active with many Adirondack groups and supported the formation Protect the Adirondacks.

Sive was instrumental in the formation of the Natural Resources Defense Council (NRDC) in 1970 as well as leading the Sierra Club’s Atlantic Chapter. The Storm King victory helped launch Scenic Hudson, which was formed in 1963 to fight the Storm King project.

Charlie Morrison, a PROTECT Board member, and friend of David Sive, said “Dave Sive not only was a staunch defender of the scenic Hudson Valley in the Storm King case and beyond but also fought for the Forest Preserve in the 1967 Constitutional Convention and on other occasions. He was a principal founder of the Environmental Planning Lobby, now better known as Environmental Advocates, and was always there throughout the years when the call came to protect New York’s environment. We will miss his leadership, his friendship and his many contributions to the conservation cause.”

The Natural Resources Defense Council posted an appreciation of his life and work. The New York Law Journal posted a remembrance of his many achievements as an environmental lawyer in New York.

See his obituary in the New York Times.

See other reports about his life in the Gannett papers and the Wall Street Journal.