The Adirondack Park Agency (APA) has begun an official process to loosen rules to make clearcutting Adirondack forests much easier. The APA passed a draft new General Permit at its November Board meeting and issued a notice to take public comments in the Environmental Notice Bulletin on November 28th.

Public comments will be accepted until December 28th. Final action is expected to be undertaken by the APA at its January meeting.

Protect the Adirondacks is urging the APA to reject this new draft General Permit.

PROTECT urges individuals and groups to write the APA and oppose this new policy to make it easier to clearcut Adirondack forests.

In November, the APA selected a Negative Declaration under the State Environmental Quality Review Act (SEQRA) stating no impact for its proposed new draft General Permit “Application and Certification for Silvicultural Treatments That Meet Jurisdictional Clearcutting Thresholds” (2012G-1) and as such is not formally conducting a public hearing on this proposed new policy. Currently, any clearcut of 25 acres or more in the Adirondack Park requires a permit from the APA. Few have been sought in the APA’s history.

It appears to PROTECT that the decision to pursue a General Permit for this issue is an abdication of the APA’s regulatory responsibility. PROTECT believes that there are a number of things about this issue that the APA has failed to consider. PROTECT finds that the APA has failed to justify or demonstrate the need for this important change in policy and that necessary data has not been gathered and analyzed.

The essence of the Adirondack Park is that it’s a landscape of continuous high forest canopy. As one moves across the Adirondack Park from Forest Preserve to conservation easement lands to large private landholdings, the Park is defined by continuous, largely unbroken high forests. PROTECT believes that a decision by the APA to significantly loosen clearcutting rules will have wide ranging implications for long-term forest management in the Adirondack Park as well as seriously undermine public support for the state Conservation Easement program, among other negative consequences. 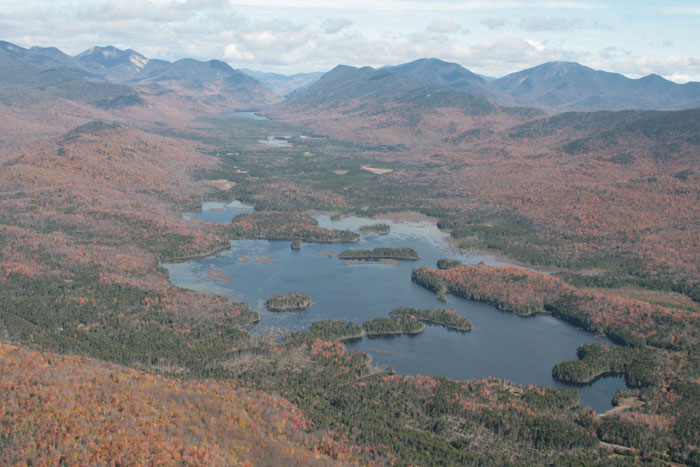 The picture above shows the Boreas Ponds, surrounded by actively logged industrial forest lands that will be transferred to the state in five years. Beyond the Boreas Ponds are other private lands and the High Peaks Wilderness area Forest Preserve lands. This picture, which includes public and private lands, shows continuous high forests. The APA’s new General Permit threatens the Adirondack landscape.

1. APA information provided as one justification for this policy change is largely built on the reported experiences of one applicant for a clearcut permit that took one year to complete. No data was presented about other applications. By basing the draft General Permit on one application, the APA has accepted an anecdote-driven process as the factual basis for this change.

2. APA has stated that the absence of this General Permit has led to forest “high-grading,” which is a poor long-term management practice. Yet, the APA has provided no examples of large landowners who have been somehow forced to high-grade their forests due to current APA law and regulations.

4. No data has been presented on the success of clearcuts as a sound forest management practice in the Adirondacks. It is PROTECT’s understanding that clearcuts attempted north of Long Lake in the 1980s failed to control tree species regeneration. As such these clearcuts failed their express purpose of changing forest composition. It is also our understanding Finch Paper’s efforts to increase the percentage of hemlock on its lands through the use of shelterwood cuts has not been successful. PROTECT is concerned that forest liquidations will be performed through use of this General Permit under the guise of attempting to change long-term forest composition.

The discussion around this General Permit should include an assessment of the efficacy of clearcuts as a forest management technique in the Adirondack Park.

PROTECT does not believe that the APA has persuasively provided a justification for this change in policy. We do not believe that the APA has adequately researched this issue. For all of these reasons listed above, PROTECT urges the APA to hold off on action to adopt this new General Permit for clearcutting. A major decision such as this should be fact-based and data-driven and this process has been purely anecdote-driven.

The APA has proposed a new draft General Permit to loosen rules for clearcutting commercial forest lands in the Adirondack Park. APA opposes this new policy.

To be eligible for the new clearcutting General Permit a landowner must have their forest lands certified in one of the various “third-party” sustainable forestry certification programs, such as FSC (Forest Stewardship Council) or SFI (Sustainable Forestry Initiative). State Article 49 conservation easement lands and some Real Property Tax Law programs (480a) are also eligible. Certification is based on forest management plans that may incorporate use of clearcuts to change forest composition over the long-term in order to grow a higher percentage of high value northern hardwood trees.

PROTECT is not convinced that an FSC, SFI or Article 49 Conservation Easements lands management plan meets the criteria for a permit as specified by the consideration and review of the 39 development considerations in Section 805 of the APA Act. PROTECT calls upon the APA to compare a typical FSC forest management plan from an industrial forestland owner in the Adirondack Park with the requirements in Section 805.

Revision of Outdated APA Rules Part 573.7 “Jurisdiction and Review of Clearcutting” is the More Appropriate Tool than a General Permit

The APA provides no information to compare the benefits of revising and updating its Rules and Regulations Part 573.7 “Jurisdiction and Review of Clearcutting” versus creating a new General Permit. While current APA rules and regulations are outdated, as they reference “Timber Harvesting Guidelines for New York” published by the Society of American Foresters in 1975, creation of a new General Permit is the wrong tool to update and improve the APA’s review of clearcutting.

In addition to the four major issues detailed above, PROTECT has a number of other concerns about this proposal.

â€¢ Forest management is but one issue impacted by the decision to undertake a clearcut. PROTECT is concerned about short-term visual impacts and wildlife impacts. PROTECT is also concerned about the long-term impacts from methods, such as spraying, to try and control forest regeneration after the clearcut.

â€¢ The draft General Permit is largely predicated on the belief that various “third-party” sustainable forestry certification programs provide long-term forest management plans that may incorporate use of clearcuts to change forest composition over the long-term in order to grow a higher percentage of high value northern hardwood trees. The draft General Permit references lands that have “forest management certification programs” such as FSC, SFI, and Article 49 Conservation Easements lands as automatically eligible for the General Permit. Additionally, some RPTL 480a lands, among other programs, may be eligible too. While PROTECT sees the success of these programs in promoting greater long-term sustainable forestry management in general, it’s important to note that these programs are voluntary. While conservation easements are binding, FSC, SFI and RPTL 480a are not, though there are tax penalties for early withdrawal from RPTL 480a. FSC or SFI certified lands, where a clearcut was undertaken through this General Permit, could subsequently quickly change ownership and the new landowner could chose not to continue with these certification programs.

â€¢ PROTECT is concerned that an easing of the APA’s clearcutting review process, as proposed in the new General Permit, could lead to liquidation of private forestlands as landowners cut property harder under the terms of the new General Permit during periods of high market values for various tree species.

â€¢ PROTECT is concerned that no upper limit for a maximum amount of land for a clearcut is included in the draft General Permit.

â€¢ PROTECT is concerned that the draft General Permit fails to specify necessary setbacks from wetlands and all riparian corridors or deer wintering yards. Such setbacks vary within the different third-party certifications and should be standardized by the APA.

â€¢ PROTECT does not believe that RPTL 480-a lands, Article 49 Conservation Easement lands, and American Tree Farm lands are subject to the same level of scrutiny and independent assessment and oversight as FSC and SFI certified lands, so they should not be eligible for this General Permit.

â€¢ PROTECT is concerned that the General Permit reviews any opportunity for public comment. Standard review of a project at the APA allows for public comment. This is especially critical for projects that involve clearcuts on state conservation easement lands, which were purchased with public funds, and include diverse public interests, including recreation, wildlife, water quality protection, among other considerations, beyond just forest management.

PROTECT does not believe that the APA has adequately justified its case for why this policy change is needed. We do not believe that a General Permit is the right remedy for this problem, if there is an actual problem. We believe that APA action to loosen the rules for clearcutting in the Adirondack Park will jeopardize the state’s strong and popular Article 49 Conservation Easements program.

PROTECT has also submitted a Freedom of Information Request to review all APA clearcutting applications and permits from the last 10 years. We have been notified that these materials will not be available until January. We would have liked the opportunity to examine the length of time for the most recent clearcutting permit as well as others for an independent examination of problems with the current application and permit approval process. While we will not have this data available for public comment, we hope to have it available before the APA meets and makes a decision in January 2013.

PROTECT will urge the APA to reject approval of this draft General Permit to dramatically ease clearcutting policy in the Adirondack Park.

Help stop this effort by writing a letter to the APA today.

See a press release here and comment letter to the APA here.