The Department of Environmental Conservation (DEC) is proposing to build a new snowmobile trail nearly 4 miles long through the northern edge of the Blue Ridge Wilderness along Route 28, just east of Raquette Lake. This trail is another part of the community connector class II trail system in the central Adirondacks, a series of road-like “trails” that have caused major damage to the Adirondack Forest Preserve. The trail needs to be approved in an amendment to the Blue Ridge Wilderness Area Unit Management Plan (BRWUMP), which the DEC has released and is now taking public comments.

This map shows the broad network of major snowmobile trails that runs through the central Adirondacks. It’s important to note that this trail system includes trail connections the link together Raquette Lake, Indian Lake, Newcomb and Long Lake. This new trail proposed through Wilderness is redundant. 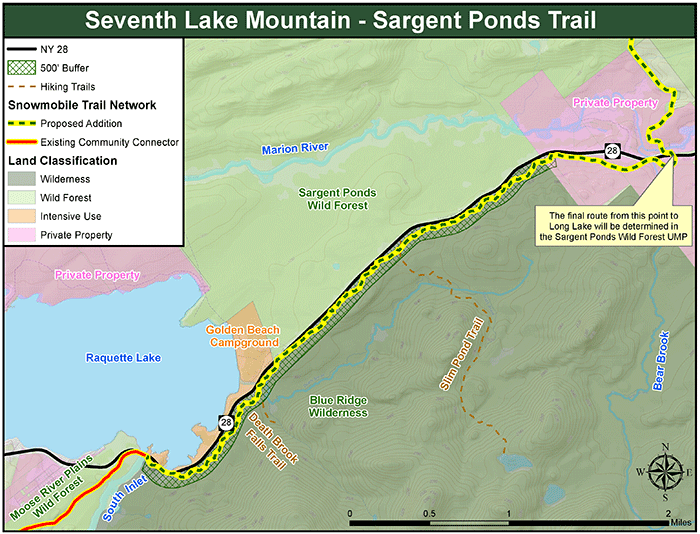 This map shows the proposed route of a major new snowmobile trail through the north end of the Blue Ridge Wilderness. The Adirondack Park State Land Master Plan makes an exception for routing a snowmobile trail in a Wilderness area within 500 feet of a highway right-of-way. Though allowable, this has never been done in the last 46 years since the State Land Master Plan was adopted.

Click here for background information from the NYS Department of Environmental Conservation about this controversial proposal.

Scroll down to the end of this post to submit your automatic email letter to defend Wilderness areas in the Adirondacks.

Unfortunately, this proposal is yet another major milestone in the current historic expansion of motor vehicle access in the Adirondack Forest Preserve, which had been a key priority of the Cuomo Administration. This proposal follows on the heels of the weakening of the APSLMP three years ago to allow motor vehicles and bicycles in the Essex Chain Lakes Primitive Area, which is supposed be managed like a Wilderness Area. That revision to the APSLMP marked the first time in the APLSMP’s 46-year history that the APA weakened, not strengthened, protection for the Forest Preserve.

Protect the Adirondacks opposes the proposal for many reasons to amend the Blue Ridge Wilderness Area UMP to authorize the location and construction of a major snowmobile trail through Wilderness lands. Our comments and concerns are detailed below.

A central tenet of Wilderness area management and classification is the absence of motor vehicles from a large landscape. The fundamental purpose of a Wilderness area is that ecological processes are allowed to proceed unimpacted by humans to the greatest extent possible. As a result human impacts are minimized to those caused by walking, paddling, or cross-country skiing. A Wilderness area by its basic definition is supposed to receive the lightest of impacts from human recreational activities. The Adirondack Park State Land Master Plan (APSLMP) articulates this purpose in its basic definition of Wilderness:

A wilderness area, in contrast with those areas where man and his own works dominate the landscape, is an area where the earth and its community of life are untrammeled by manâ€‘â€‘where man himself is a visitor who does not remain. A wilderness area is further defined to mean an area of state land or water having a primeval character, without significant improvement or permanent human habitation, which is protected and managed so as to preserve, enhance and restore, where necessary, its natural conditions, and which (1) generally appears to have been affected primarily by the forces of nature, with the imprint of man’s work substantially unnoticeable; (2) has outstanding opportunities for solitude or a primitive and unconfined type of recreation; (3) has at least ten thousand acres of contiguous land and water or is of sufficient size and character as to make practicable its preservation and use in an unimpaired condition; and (4) may also contain ecological, geological or other features of scientific, educational, scenic or historical value. (p 22)

This definition is important because it clearly prohibits snowmobile use, or use of any kind of motor vehicle, in a Wilderness area. The basic Wilderness definition states that lands classified as Wilderness should be managed in a wild, natural, untrammeled state where any impacts or marks of humans are difficult to detect. The “Wilderness Basic Guidelines” in the APSLMP states “The primary wilderness management guideline will be to achieve and perpetuate a natural plant and animal community where man’s influence is not apparent.” A wide, road-like community connector class II snowmobile trail undermines everything that a Wilderness area is all about.

In addition to the exception for use of motor vehicles in Wilderness areas by state personnel for emergencies, such as search and rescue, under the APSLMP there is one other exception. The APSLMP provides a single opportunity for public use of motor vehicles in a Wilderness area, which is to be undertaken in limited instances and on a site-specific basis. The “Boundary Structures and Improvements and Boundary Marking” section in the APSLMP Wilderness guidelines outlines this exception:

1. Where a wilderness boundary abuts a public highway, the Department of Environmental Conservation will be permitted, in conformity with a duly adopted unit management plan, to locate within 500 feet from a public highway right-of-way, on a site-specific basis, trailheads, parking areas, fishing and waterway access sites, picnic areas, ranger stations or other facilities for peripheral control of public use, and, in limited instances, snowmobile trails. (p 27)

The heart of the proposal to build the new community connector class II snowmobile trail through northern reaches of the Blue Ridge Wilderness Area is based upon the APA-DEC’s interpretation of this passage in the APSLMP. The proposal contends that a new roughly 4-mile-long, 9-11-foor-wide snowmobile trail complies with the APSLMP as long as it stays within 500 feet of a highway right-of-way.

Protect the Adirondacks does not believe that this APSLMP passage provides carte blanche authorization for a snowmobile trail in a Wilderness area even if it is located within 500 feet of a highway right-of-way. The APSLMP passage above sets out two explicit tests. Moreover, these tests must be evaluated in the context of directives to state land managers for Wilderness management throughout the APSLMP. These tests state that such a trail should be “limited” and on a “site specific basis.” Protect the Adirondacks does not believe that a 4-mile-long trail is limited. We also find that road-like class II snowmobile trails cause major environmental impacts due to excessive widths, terrain alterations, and changes in the native flora. The steep slopes, old growth and mature forests, and wetlands in the Blue Ridge Wilderness area will be irreparably damaged.

There’s a reason that a snowmobile trail has not been built in a Wilderness area since the creation of the APA and the adoption of the Adirondack Park State Land Master Plan (APSLMP) in 1972. For 46 years, it has been fully recognized that snowmobiles and motor vehicles undermine and destroy the essential qualities of Wilderness lands. If the APA approves this action, it will irreparably damage Wilderness lands in the Adirondack Forest Preserve. The proposed action should be abandoned.

New Trail Will See Clearing of Over 5 Acres of Wilderness

The new proposed trail will see the clearing on more than 5 acres of Forest Preserve. Community connector class II trails require extensive tree cutting and excavating the trail surface to make sure that it is smooth and level. The trail surface is graded to a consistent appearance. The result is that the lands within this corridor are very different from the lands outside the corridor. The trail surface is a graded area that is often planted with a grass seed mix, while the areas outside the corridor are forest lands.

Alternatives Must be Considered

To date, the state has not adequately investigated alternatives, including reclassification of the lands in question to Wild Forest, or other routes. These options must be evaluated so that if this trail is constructed long-term damage to Wilderness areas will be minimized.

A community connector class II snowmobile trail surface is graded, leveled, and flattened by multi-ton tracked excavators. Extensive bench cuts are dug into the trail in many sections that run for hundreds of yards at a time and are 15 to 20-feet wide in many areas. Protruding rocks are removed, roots are cut back, and extensive tree cutting is undertaken, often at a rate of 1,000 trees per mile. All understory vegetation is removed and oversized bridges more than 12 feet in width are built to support multi-ton groomers. Ledge rock is fractured and split apart, trail surfaces are scarred by 6-wheel ATVs that leave deep wheel ruts during construction and maintenance, crushed gravel is often used to stabilize degraded areas, and the trail is studded with stumps. Extensive areas of forest canopy are opened above the class II trail and the trail surface is dominated by extensive grass fields incongruent with the surrounding forest. Bridges are outfitted with plastic reflectors for nighttime driving. Trail signs resemble road traffic signs.

A “foot trail” is where people walk single file. Foot trails are narrow and built to go over and in between roots and rocks and around trees. Foot trail surfaces are uneven and follow the terrain. Few trees are cut down for foot trails and there are scarcely any stumps of cut trees. Vegetation on the trailside encroaches, and the trail is canopy covered. Steppingstones and split logs are commonly used to pass over streams and wet areas. There are no reflectors and grass is scarce.

The public comment period has closed, but if you want you can still share your thoughts with the NYS Department of Environmental Conservation.

Thank you standing up and protecting Adirondack Wilderness!