A.7735a/S.7010c “AN ACT to amend the environmental conservation law, in relation to aquatic invasive species inspection stations and spread prevention efforts; and to amend chapter 330 of the laws of 2014, amending the environmental conservation law relating to aquatic invasive species, spread prevention, and penalties, in relation to making such provisions permanent.”

In 2014, Protect the Adirondacks supported the New York Invasive Species Transport bill, which for the first time made it illegal and created penalties for transporting dirty boats or boats laden with organic materials and plants. This bill required that boat owners ensure that their boats were clean and free of aquatic invasive species (AIS) before launching onto a lake. Since 2014, the Department of Environmental Conservation (DEC) developed rules and regulations, and boat inspection efforts expanded across New York. A.7735a/S.7010c now makes the transport law permanent, which is a good thing.

Across the Adirondack Park, we must move to the next step to protect our waters from the harm and degradation of AIS. As of 2016, 103 Adirondack waterways were documented as infested with AIS, with 268 having no AIS observed. As of 2020, 108 Adirondack waterways were found with AIS infestations, with 332 having no AIS observed. New lakes infested with AIS in recent years include Weller Pond, Utowana Lake, Rockwood Lake, Moody Pond, Penfield Pond, and Little Forked Lake in the Adirondacks, as well as Lake Alice in Clinton County. Without more robust measures, this sad trend will continue, and more lakes will become infested with AIS.

This legislation is important for three reasons: 1) Inspections are required before launching on an Adirondack waterway; 2) DEC can partner with local governments/organizations for inspection/decontamination programs; 3) Research is required to verify the effectiveness of the legislation.

A.7735a/S.7010c requires inspections: “Before entering a waterbody, owners and operators of motorized watercraft who are not in possession of a self-issuing certification or an inspection or decontamination certificate since their last operation of such watercraft in a waterbody shall stop at an aquatic invasive species inspection station where such station is located adjacent to such waterbody and open at the time of entering the waterbody in order to inspect their watercraft to ensure compliance with the requirements of section 9-1710 of this title. The department shall maintain on their website a list of such stations and their operating hours in order to assist motorized watercraft owners and operators in locating stations where they can inspect and clean their watercraft.”

A.7735a/S.7010c empowers the DEC to set up inspection/decontamination stations around the boundary and within the Adirondack Park. It establishes methods for verifying the decontaminated status of boats. It enables partnerships between the DEC and other entities to pursue AIS interdiction and prevention and boat inspection and decontamination.

A.7735a/S.7010c also requires research: “The department will review all data collected at aquatic invasive species inspection stations, including any data from designated entities, to identify any changes to the current practices to better protect Adirondack lakes and waters.” This data and analysis will help to hold the DEC accountable. 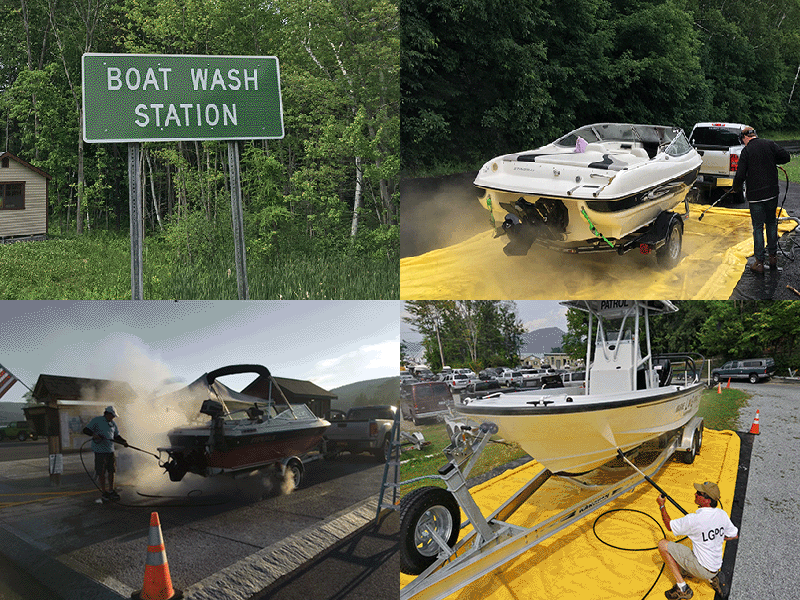 The Adirondack Park is home to Lake George Boat Control program, which over the last five years that it has been in operation has not seen any new infestations of AIS in Lake George, one of the most popular lakes in New York. Lake George-style boat control laws are what the major lakes in the Adirondack Park need and deserve. A.7735a/S.7010c is a modest step in that direction.

While Protect the Adirondacks supports A.7735a/S.7010c, we note that it will only succeed if the DEC wants it to succeed. Despite strong support from within the Adirondack Park for stronger, bolder actions to interdict and prevent the spread of harmful AIS, the DEC could easily come up with any number of reasons, such as a lack of funding, to do very little that is new.

This bill also fails to provide enhanced relief and support for communities and waterbodies across New York State. Throughout Upstate New York, our lakes and clean water underwrite the local economy and quality of life. Despite the passage of the Transport Law in 2014, we’ve seen hydrilla, a particularly damaging AIS, spread to many other parts of Cayuga Lake from its first infestation at the south end in Ithaca, and to other lakes in Broome County, Tioga County, and Monroe County. As we’ve seen with decades of fighting AIS in the Adirondacks, and as proved again and again with hydrilla in central New York, it’s incredibly difficult to eradicate AIS from a lake or pond. Interdiction and prevention are the most effective means to protect a lake from AIS, and it’s the most cost-effective AIS control measure.

This law will need to be strengthened to provide the same support to communities across New York from the DEC that may be possible in the Adirondacks. A statewide DEC program would better protect the water resources of the Adirondack Park and limit the spread of AIS in New York.