Protect the Adirondacks has reviewed Governor Cuomo’s draft 2020-2021 budget for the State of New York and provides the following comments.

The Governor proposes a new $3 billion bond act for a broad range of environmental projects. The environmental community has advocated for a new bond act for a number of years and legislative leaders have also proposed environmental bond acts. However, the devil is in the details, and allocations in specific categories will be of significant importance. While we are supportive of this Bond Act, we urge the Legislature to detail the types of eligible projects that will best meet the environmental challenges in the years ahead. The Bond Act should also be expanded to $5 billion.

Protect the Adirondacks believes that the budget language should carefully detail spending so that the state’s voters know exactly what they are supporting. We call upon the Legislature to raise the amount of funding in this Bond Act to $5 billion and urge that the spending is targeted and highly detailed. 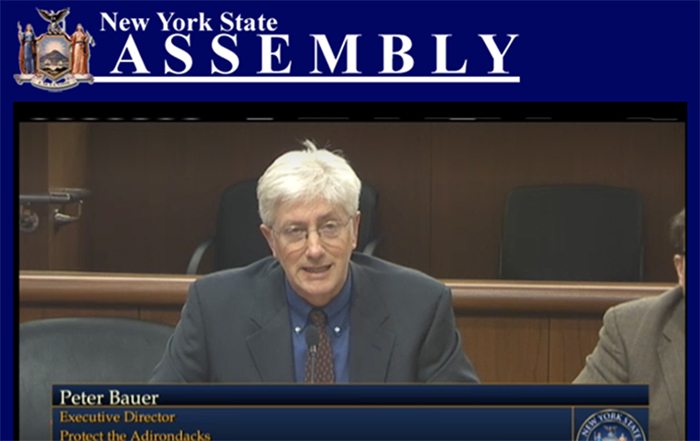 Expand the EPF to $500 Million: The EPF has been funded at $300 million for the last four years. This does not meet the environmental challenges facing New York State. Protect the Adirondacks supports a larger EPF in 2020, where the EPF is approved with a schedule to increase to $500 million over the next four years, by 2024, with a future goal of $1 billion. If New York is going to meet the immense environmental challenges ahead it needs greater resources.

No State Positions in EPF: We oppose funding of any permanent state positions out of the EPF. These should remain as parts of the budgets of state agencies.

EPF State Land Stewardship Account: The State Land Stewardship account funds stewardship and maintenance of state lands, including the 3-million-acre Forest Preserve, state forests, and wildlife refuges, among others. We support the proposed allocation at $36 million. We support the $1.2 million for a new pilot project of shuttles in Essex County to help manage overuse of the High Peaks Wilderness Area. We oppose funds for continued “restoration” of Great Camp Santanoni. The facility has been stabilized and we do not believe further work is necessary. The Land Stewardship Account should include two directives to state agencies:

Land Protection Account: We support the Land Protection category at $30 million. This funding is in line with past years and will continue to meet the state’s needs to protect important open spaces. Land protection funding has been a major piece of the EPF in years past, reaching levels of $50-$60 million. In 2020, there are no major land acquisitions, as Governor Cuomo has made the fewest land purchases of any Governor, since Hugh Carey. PROTECT supports a smaller line in the EPF, to heighten the focus on state lands stewardship and invasive species control. We also strongly  support land protection funding of $500,000 million or more in the new proposed Bond Act as forest protection is a vital part of climate change mitigation.

New EPF Account for Research: It’s easier for academics and non-profits in New York to secure grants to do work in South America than it is to undertake studies in New York. The EPF needs a new category for research that focuses on the natural resources and the relationship between people and the environment in New York. This fund would need to create some form of review and administration function within the Department of Environmental Conservation and other agencies with Legislative review and approval. Environmental research should be funded at $5 million annually in the EPF. Good science makes good policy. New York State should invest in environmental research across the state to identify critical problems and to help fund solutions.

Invasive Species Account: We need to boost spending in this account, and we need to prioritize education and interdiction programs. At this point, eradication grants help to try and control invasive species, but they do not eradicate. An equally important investment is in educational and intervention programs aimed at stopping the spread of invasive species. We urge the Legislature the reduce the size of the Eradication Grants Line and to create a fund of equal size for Education and Prevention programs designed to protect uninfested areas of the state and to educate the public about how to prevent the spread of invasive species. This would dovetail with efforts to strengthen the state’s Invasive Species Transport Law.

Landfill Closure: We support the zero line for Essex County and Hamilton County. The state’s obligations in the settlement around the Essex County Landfill how been satisfied.

RGGI Transfer: We oppose any raid or transfer of proceeds from the Regional Greenhouse Gas Initiative program.

Clean Water Fund: Protect the Adirondacks supports the $500 million for the Clean Water Fund, $250 million for this budget year and an extension of the program. New York still faces an immense backlog of needed upgrades and expansions to public drinking water and sewer systems in the tens of billions. Throughout Upstate New York the water in lakes and rivers underwrites the local economy through tourism and high land values. Clean water also underwrites the quality of life.

The Department of Environmental Conservation

Capital Funding: The Governor proposes an increase of $6 billion in new capital appropriations for DEC, which he claims is almost entirely attributable to the appropriations needed to implement the Restore Mother Nature Bond Act. Much more information is required regarding the source of the $6 billion and how it will be dispersed.

Climate Change Plan: The Governor proposes to spend $33 billion over five years for climate change and resilient communities. This includes funding from the $3 billion Restore Mother Nature Bond Act, supplemented by $740 million in additional state funding. Through NSYERDA, NY Green Bank, NYPA and RGGI, the Governor proposes to spend $28 billion on green energy initiatives, which include vast amounts of new private investments. These are worthy projects, but the budget projections seem like pie-in-the-sky estimates with no definite commitments.

State Should Increase Forest Ranger Staffing: Protect the Adirondacks believes it is essential to increase the number of Forest Rangers and other personnel, such as assistant Rangers and backcountry stewards, to respond to these pressures. Ranger staffing for the entire state is currently around 135 positions. This needs to be expanded to 175 with a special focus on the High Peaks in the Adirondacks.

The Forest Rangers have primary responsibility for DEC’s care, custody and control of five million acres of State-owned land and conservation easements across New York, the vast majority of which is in the Adirondack Park. Today the average Forest Ranger is responsible for patrolling 53,752 acres. In 1970, it was 28,516 acres. There has been a major increase in public use, and the number of search and rescue missions has increased twofold.

Legislature Should Stand Up for Ranger Management: The Forest Rangers should remain and autonomous division within the DEC. They should not be merged with the Environmental Conservation Officers. Forest Rangers are specially trained in Forest Preserve protection, Leave No Trace practices, fire-fighting and search and rescue. They should remain as a separate and distinct force that serves the Forest Preserve.

DEC Staffing: For the first time in many years, the Governor proposes to increase staffing for DEC by 47 FTE’s, including 16 FTE’s for Environmental Enforcement and one for Lands and Forests to work on forest carbon sequestration. There is no explanation about the roles of these new positions. The DEC’s plan for a High Peaks Trail Crew of 10 part-time positions will do little to build a sustainable trail system and tackle the 100-year backlog of trail work in the High Peaks Wilderness Area. The DEC needs to make a greater investment in Trail Crews.

Protect the Adirondack opposes all funding for non-winter activities at Gore Mountain, Whiteface Mountain and Belleayre Ski Areas. These facilities were approved through Article XIV Constitutional Amendments for locations to build alpine ski areas. The NYS Constitution was not amended to provide carte blanche authority to create year-round summer tourism facilities. The Legislature should reject funding for new zip lines, mountain coasters, ATV rides, and all other non-winter activities at these facilities. All ORDA funding should be scrutinized by the Legislature to ensure that it is consistent with the constitutional amendments. There needs to be a legislative study about whether there are real economic benefits to the hundreds of millions of ORDA funding in the last three years.

Once again, the Governor has chosen to freeze staffing levels at the APA. However, the Governor has proposed a funding increase of $1.3 million, with $1 million assigned for capital improvements to the APA building. Upgrading this structure is apparently more important than providing the agency with the staff necessary to carry out its responsibility. The APA FTE’s has not changed in many years, despite the significant work required by the agency to administer the Adirondack Park Private Land Use and Development Plan, the Wild, Scenic and Recreational Rivers Act, and the Freshwater Wetlands Act; as well as collaborating with DEC and OPRHP to administer the State Land Master Plan, developing Unit Management Plans, working with local governments to develop and implement land use plans, and perhaps most importantly to ensure that the Agency’s decisions are fully implemented.

Regional Economic Development Councils: The Governor continues to propose $150 million annually for “competitive economic development projects.”  PROTECT has consistently called for detailed oversight of the projects that have funded under this program. We urge the Legislature to conduct oversight hearings into the projects and expenditures authorized under this program. PROTECT agrees that the funding can provide real incentives for local governments that have lasting value as economic drivers, but in the North Country and Adirondacks these funds go overwhelmingly to culvert upgrades, salt sheds for municipalities, and clean water municipal infrastructure with a fraction going to actual job-creating businesses. Moreover, more than half the funding from Regional Economic Development Councils goes to tax credit programs and IDA incentives that are not utilized or applicable, in the Adirondacks.

Part TT Freshwater and Tidal Wetlands and Coastal Erosion Hazard Areas: The Governor proposes to make numerous changes to the Freshwater Wetlands Act (Article 24, ECL), as well as to Coastal Erosion Hazard Areas (Article 34, ECL) and the Tidal Wetlands Act (Article 25, ECL). We recommend that this part be removed from the Article VII bill and introduced as a separate (non-budget) bill. There are a number of issues that deserve further consideration, particularly the proposed change to redirect all fees from these programs into the Conservation Fund, rather than the Environmental Protection Fund, as is currently the case.

Part SS Product Stewardship: PROTECT supports measures to require extended producer responsibility for carpet/mattress makers and to provide DEC with the authority to additional products in the future.

Alfred Center for Glass Reuse: PROTECT supports this proposal, which is designed to kick-start a glass recycling industry in New York.

Protect the Adirondacks will be working in the weeks ahead on these priorities.