State agencies have released a new draft amendment to the Unit Management Plan (UMP) for the High Peaks Wilderness area, which includes over 270,000 acres and stretches from the Northway to Long Lake. The High Peaks Wilderness Unit Management Plan (HPWUMP) amendment is important because it contains a number of proposals that seek to improve management and try and meet the immense challenges posed by the major increase in public use. This amendment was cast narrowly by state officials and does not address the most pressing and important issues facing the High Peaks for wilderness management, overuse, public safety and natural resource protection.

Click here for a copy of the new High Peaks Wilderness UMP amendment.

Scroll down to the bottom of this web post and submit an automatic letter to state agencies. 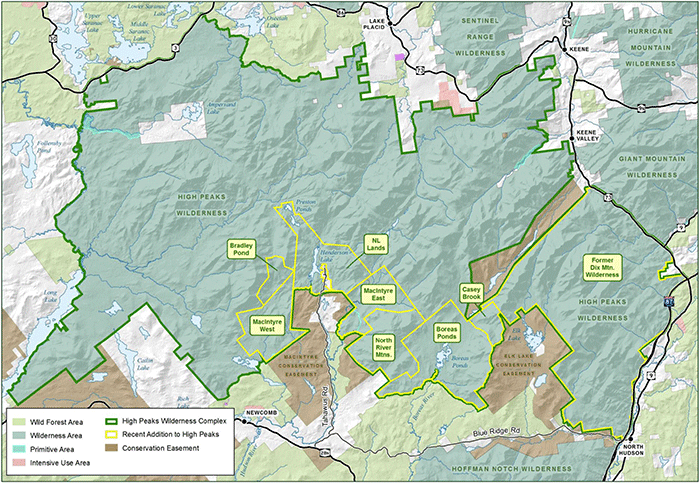 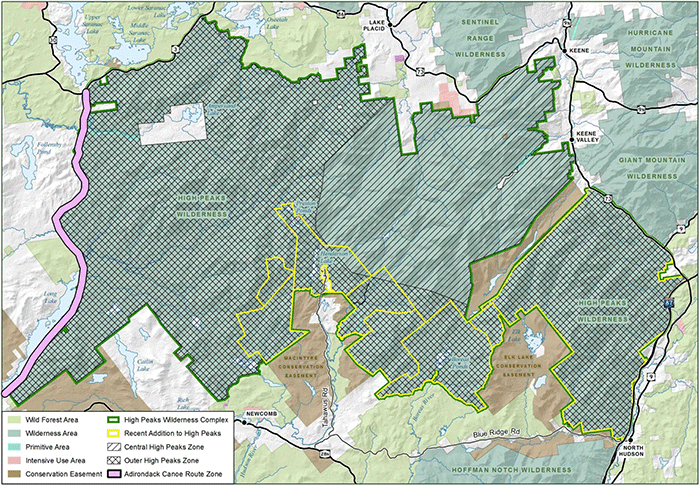 This map shows the three administrative zones of the High Peaks Wilderness Area. These zones have different rules for public use, such as the leashing of dogs, use of bear canisters, and campfires, among other things.

Special rules for these “zones” include group size limits of 8 for overnight and 15 for day use across all zones. The ban of glass containers and mandatory registration is in effect for all zones. Bear canisters are required in the central and western zones. Camp fires are banned in the central zones and dogs must be leased at all times. Otherwise, dogs must be leased at trailheads, campsites, and summits. 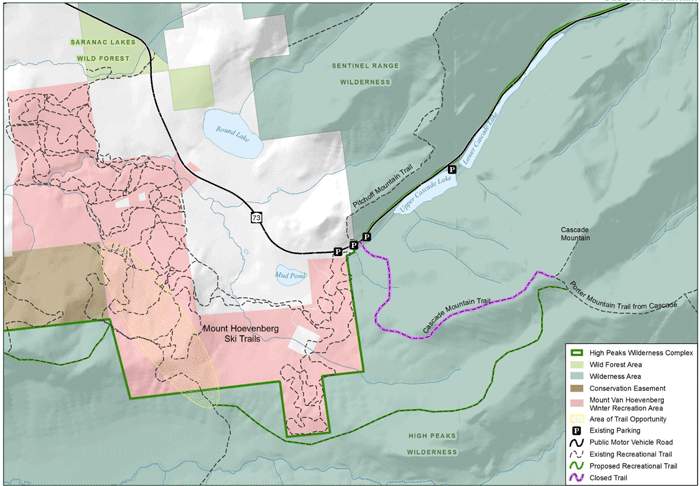 New trail route and public parking for Cascade Mountain: The DEC proposes a new trail router and new parking area for Cascade Mountain. This is the most popular High Peak and sees over 40,000 hikers annually. The parking lots on the shoulders of Route 73 are unsafe and often result in cars parked in a line for nearly 1 mile. Through this plan, parking will largely be moved from Route 73 to the Mountain Hoevenberg winter sports facility, which has ample parking in summer months. The new trail up Cascade Mountain will be longer (see map above), though it will be designed to model standards. Hikers will also be able to access the hiking trail to Mount Van Hoevenberg, which may lessen the total number of hikers seeking to climb Cascade Mountain. 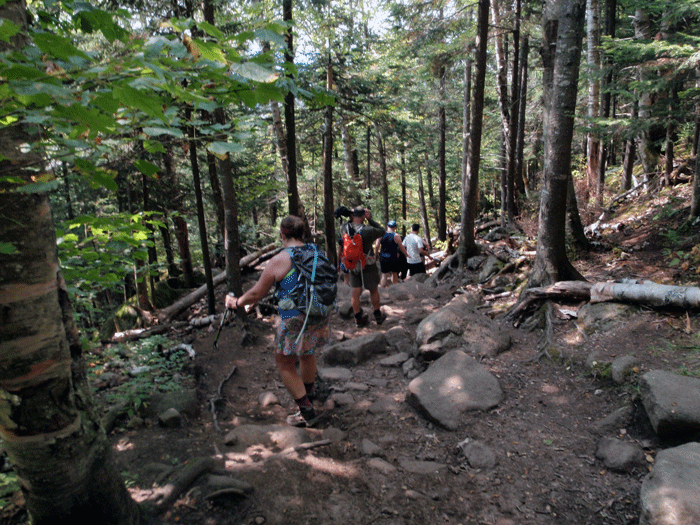 Hikers descending Cascade Mountain on a section of heavily work trail. Cascade Mountain sees upwards of 40,000 hikers annually. This trail is believed to be the most heavily used trail in the High Peaks. 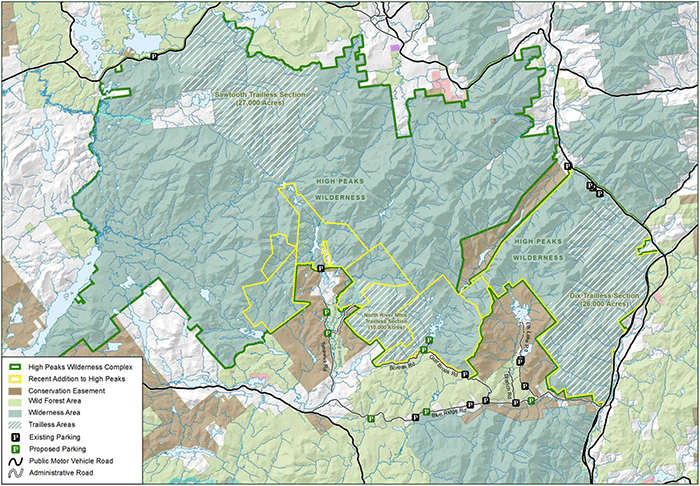 This map shows two new formal “trailless” areas designated in the High Peaks Wilderness. State agencies plan to manage these areas as trailless with no formal facilities. The public is allowed to go to these areas by bushwhacking.

PROTECT supports new trailless area designations: One positive proposal in the HPWUMP is the proposal to create three trailless areas. The new UMP states that these areas offer “unconfined wilderness experiences.” These areas will not have trails or developed facilities, such as lean-tos or campsites. These three areas include the 27,000 acre Sawtooth Mountains Trailless Section, in the northwest part of the High Peaks Wilderness; the 26,000 acre Dix Trailless Section, which runs from, the McComb-Dix Mountain trailed areas to the Adirondack Northway. The third area is the 10,000 acre North River Mountains Trailless Section, which runs from the west shores of Boreas Ponds across the North River mountains. 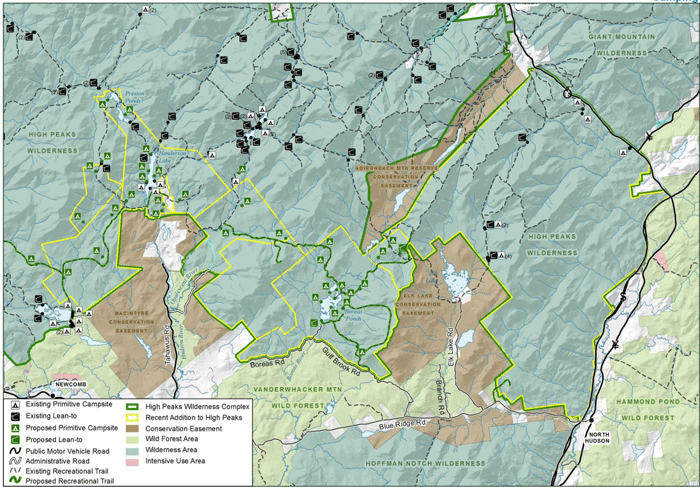 The amendment to the High Peaks Wilderness UMP designates a number of new campsites. These are marked in green on the map above.

Proposed New Campsites: The HPWUMP calls for a number of new campsites (see map above) at places like Lake Andrew, Bradley Pond, along the Adirondack Canoe Route, Lake Jimmy, Preston Pond, Henderson Lake, Boreas Ponds, White Lily Pond, and the Opalescent River, among other areas. The DEC is proposing the conduct a field analysis about the viability of campsites at these locations and develop a list of priority areas. The DEC will also determine campsites in the High Peaks that need to be closed in order to let the area around it recover. 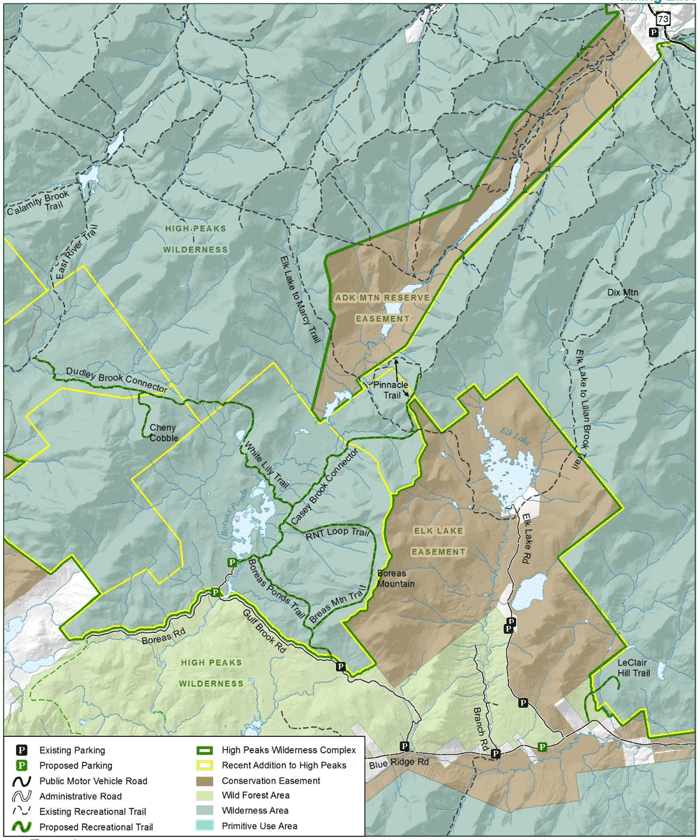 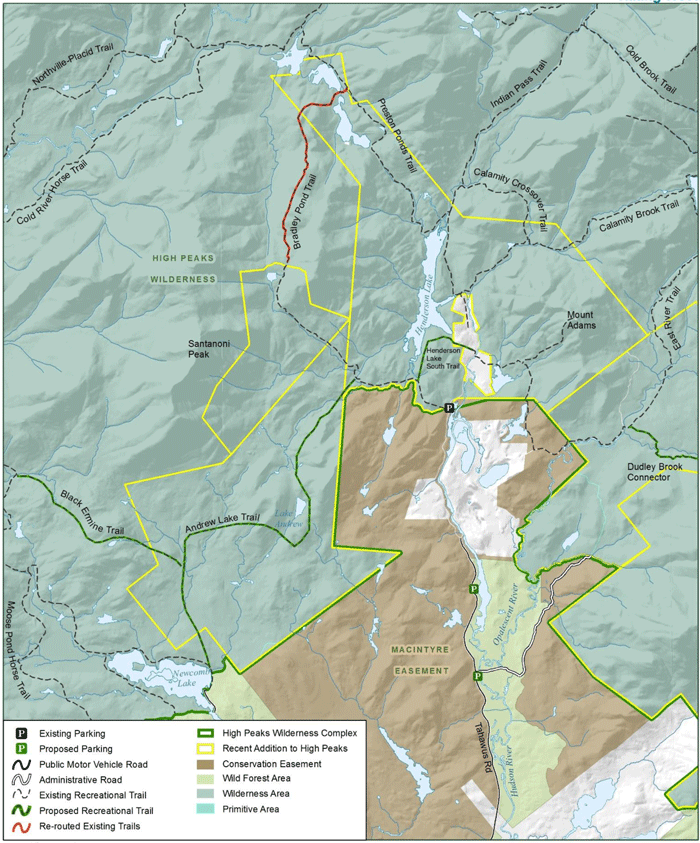 These two maps show a series of new proposed hiking trails to integrate newly purchased and classified lands with the rest of the High Peaks Wilderness.

Proposed New Trails: The HPWUMP proposes a series of new trails designed to integrate newly acquired lands with the High Peaks. Trails from the Boreas Ponds will connect to White Lily Pond and Panther Gorge, and from Boreas Ponds to Calamity Brook. Other trails connect Henderson Lake to Newcomb Lake.

Carrying Capacity Analysis: The new HPWUMP proposes a new system to assess the overall carrying capacity of the area. The goal of state agencies it to implement a new program that will allow them to assess establish “acceptable conditions” for the natural resources and recreational facilities in this unit. They will use this information to determine the existing relationship between existing conditions on the ground and those that they desire. They will then prescribe different management actions to move towards the desired conditions as well as set up some form of monitoring program to make sure all these objectives are going to be met. This is a new approach by the Department of Environmental Conservation and in many ways the new trails in the southern High Peaks maker the test case for this new approach.

PROTECT supports the state’s commitment to developing and implementing carrying capacity analysis. We will work with state agencies to share information and help to develop a comprehensive new program that will improve the management of the Forest Preserve by protecting both natural resources and the user experience.

Carrying Capacity on Boreas Ponds: There should be a carrying capacity analysis for Boreas Ponds that sets limits on use. The parking lot at the 4 Corners should not be built until the carrying capacity is completed and sized according to the number of boaters deemed appropriate to protect the ecologically sensitive Boreas Ponds. The SLMP requires this analysis.

In the High Peaks, cars parked on the side of Route 73 or the Adirondack Loj Road often stretches for 2 miles. Given the huge crowds and Ranger shortage, Forest Rangers find it helpful to talk with hikers in their cars on the road before they begin their hikes on the Forest Preserve. More Rangers are needed to meet the immense challenges posed by tens of thousands who use the public Forest Preserve.