The new Frontier Town state campground was opened to great fanfare just before the July 4th holiday this year. The campground is now fully developed with campsites, trails, and amenities such as showers, playgrounds, horse stalls, pavilions, and scenic lookouts on the banks of the Schroon River, among other features. Construction of the new Paradox Brewery is well underway.

The Frontier Town Campground is designed to pay homage to the western themes of the old Frontier Town wild west amusement park that was in its heyday in the decades after the Second World War. The amusement park had become dilapidated over the years and the new campground was a State intervention to help restore the site to some form of commercial use. The main gate has a western design and many of the shower and bathroom buildings have western saloon facades.

The campground is built with special facilities for equestrian camping, in line with the site’s wild west amusement park heritage. The trails in the campground are built to horse trail standards and the scenic overlooks on the Schroon River are designed for horses and riders. Over-sized, specially designed staircases were built in two locations to assist horses and riders traverse steep terrain. One area of the campground has stalls, manure pits, loading areas, and other features for keeping horses overnight. That area also has a “stud pen.”

Beyond the equestrian campsites, the campground has a half dozen long roads that end in cul-de-sacs, all lined with 91 newly built campsites with firepits, picnic tables, raised tenting areas, mowed lawns, and parking spots. The campsites are attractive and spacious, perfectly fine for car or RV camping. The shower and bathroom buildings are all new and spotless. The campground has several pavilions, two large, beautiful playgrounds far better than we have at most Adirondack elementary schools, and even a special playground designed for toddlers. 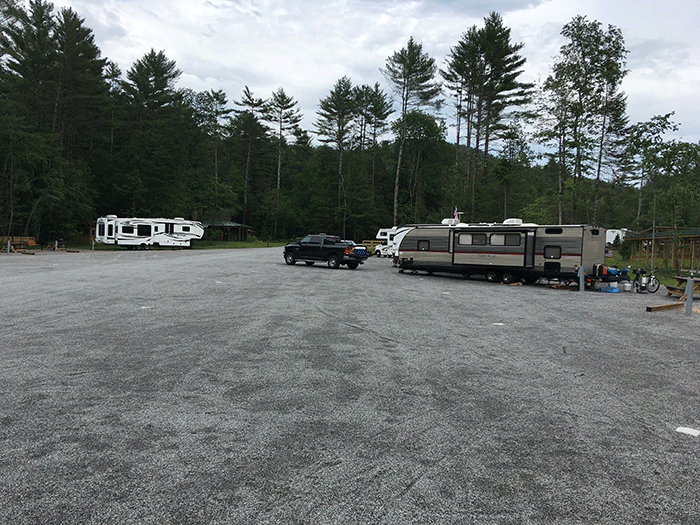 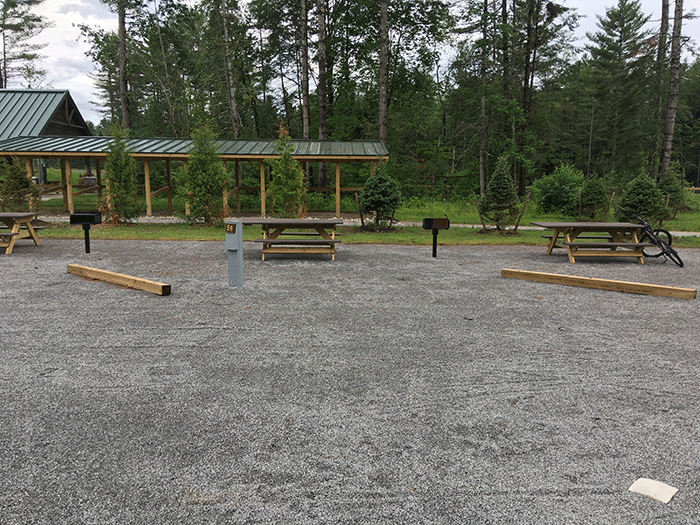 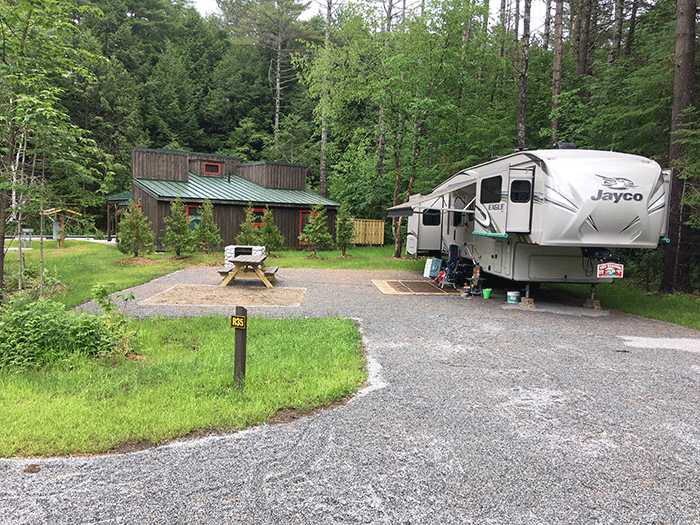 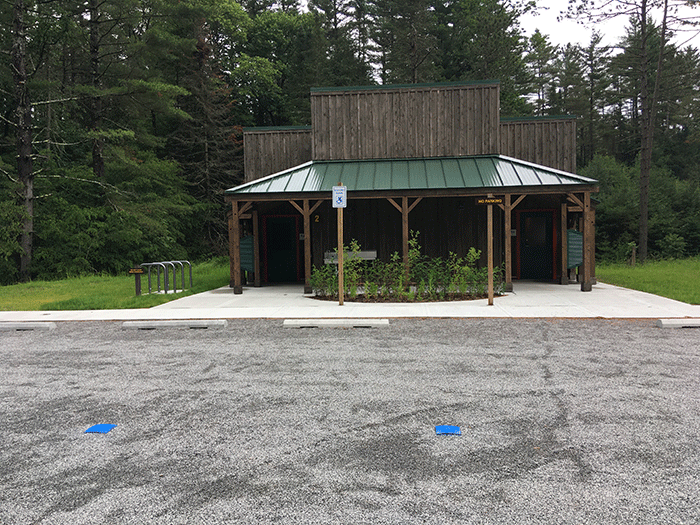 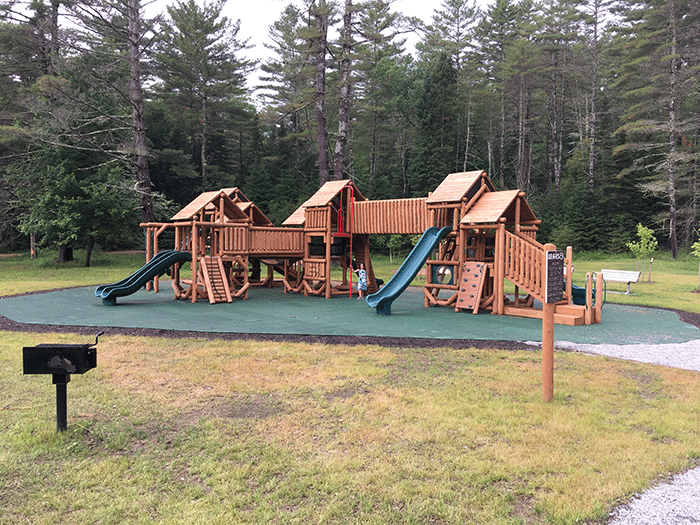 These pictures show different facilities within the new Frontier Town Campground. These include special camping areas for trailers with horse, drive-in campsites, stables/stalls for horses, shower buildings, and playgrounds, among other features.

The campsites are linked with a newly built pathway that snakes through the campground, designed with an artificial surface of small stones and graded flat and wide, running around 10 feet wide, though wider with grassy shoulders in many places. The gravel pathway was four or five feet wide. It’s designed for horses and riders or people walking side by side. The roadways in the campground are new and when I was there on a hot weekend in mid-July the campground was probably 20% or so occupied and a few kids on bikes were riding around.

The campground is different for the Department of Environmental Conservation (DEC) because it’s constructed through a conservation easement and not on the Forest Preserve. The State owns the right to operate a campground, but the underlying rights are owned by Essex County and the Town of North Hudson. Though it’s the only state campground built on easement lands in the state’s campground system, it operates the same as the other state campgrounds. The State should get high marks for its storm water management systems, as there are catch basins and rain gardens built throughout. Though it’s a new site I did not see any of the invasive species often found is areas with new construction that required lots of disturbance. 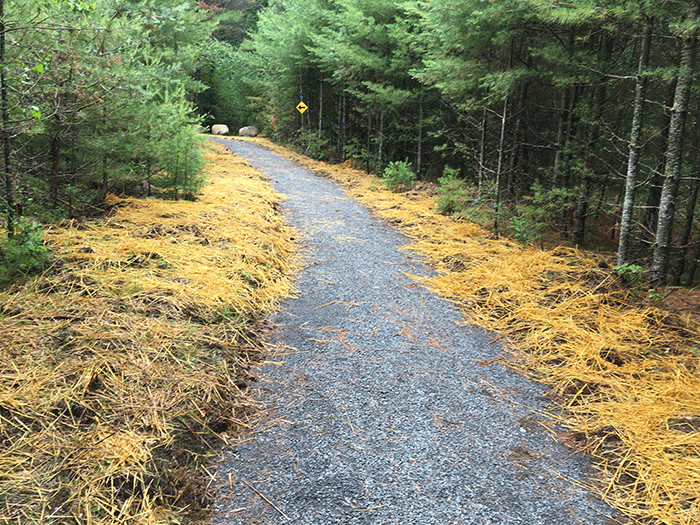 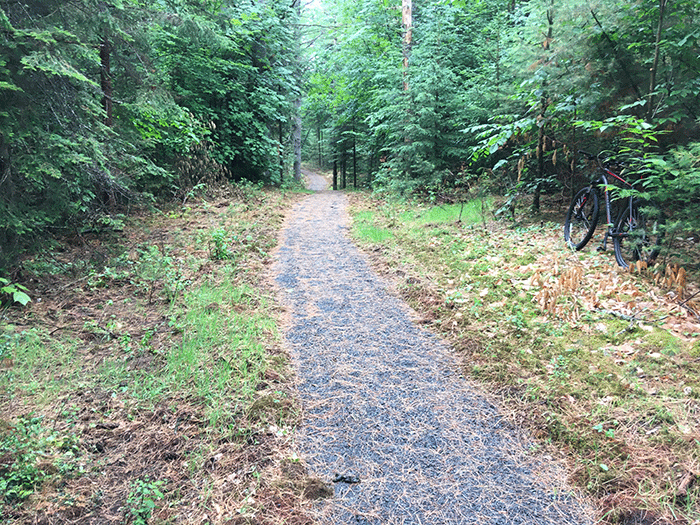 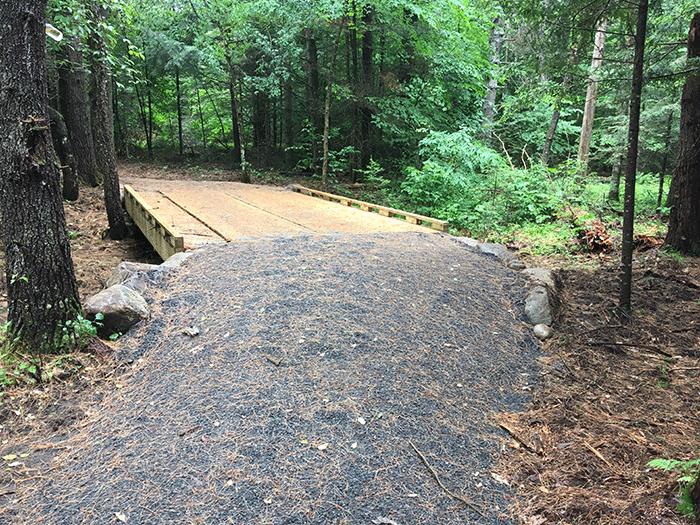 These three pictures show the new “multi use” trail in the Hammond Pond Wild Forest area. Tons of non-native materials were brought in and spread on this trail. This trail involved extensive tree cutting and grading with heavy equipment. This trail extends well beyond 12 feet at many different locations.

There are few people in the Adirondacks who have spent as much time as the staff of Protect the Adirondacks have on class II snowmobile trails, but this one takes designs and impacts to a whole other level. The trail is the standard format of class II trails: 12-foot wide trail with a surface graded flat, many boulders removed from the trail corridor and debris piles pushed off onto the trailside, many areas of the trail that are 15 feet wide or wider, oversized 12-foot-wide bridges, extensive tree cutting and stumps, destroyed forest understory, and the trail and trailsides that are planted heavily with grass. The thing about “multi-use” trails built by the Adirondack Park Agency (APA) and DEC these days is that they’re built to specifications for class II snowmobile trails, which makes them unattractive for hiking or biking.

The new feature with this newly built trail in the Hammond Pond Wild Forest east of Route 9 is that it was apparently built with the same design as the trail that snaked through and around the Frontier Town Campground. It has the same four- or five-foot-wide wide gravel tread area in the center of the trail and wide trailsides planted with grass. Outside of a few trails that have been built in Wild Forest and Intensive Use areas in the Forest Preserve that were specially designed to facilitate use by disabled individuals, such as Icehouse Pond or Helldiver Pond trails in the Moose River Plains, and feature crushed stone pathways for wheelchair use, there are not many of these kinds of the trails.

Many tons of small crushed stone were used in the Hammond Pond Wild Forest area to build this trail. There are many questions for the APA and DEC about how such a trail could be legally constructed.

My reading of the recently amended Hammond Pond Wild Forest UMP does not find anything about a class II/multi-use trail with tons and tons of crushed stone. The raised bed in the center of this trail gives this “trail” a distinct road-like feel, with long grassy shoulders running along each side. While the DEC had carte blanche to build any kind of trail it wanted on the Frontier Town Campground conservation easement lands, it is bounded on the Forest Preserve by the rules of the Adirondack Park State Land Master Plan. Despite the legal differences on the two land use areas, there appears to be no difference at all between the trail sections on easement lands and the trail sections in Wild Forest lands.

There are other questions about the Frontier Town Campground.

Basil Seggos, the DEC Commissioner, states that the campground will help to disperse public use out of the High Peaks Wilderness. I question his logic. After touring the Frontier Town Campground I don’t see how it is that a visit there is going to satisfy someone who is seeking the experience of hiking up High Peaks like Algonquin or Giant or Colden.

The most visible part of the former Frontier Town wild west amusement park was the large A-frame at Northway Exit 29. This is not part of the new campground or state complex and its future use is uncertain. The state has plans to build some form of Visitors Center or Information Center associated with the campground complex and brewery, but I question the wisdom of building such a facility at Exit 29 where people will have to make a special trip to find it.

The Frontier Town Campground cost somewhere in the neighborhood of $25 million. In addition to questions around compliance of associated trails in the Hammond Pond Wild Forest area with the State Land Master Plan there are valid questions about whether this is the best investment of $25 million to help build Adirondack communities and the local economy? It is certainly a shot in the arm for North Hudson, but are campers simply being recruited from other nearby private or state campgrounds? Does this campground help to build local institutions and businesses? What are the long-term costs to the state to maintain it? How will design elements of this campground affect other state campgrounds in the Adirondacks?