The Adirondack Park Agency (APA) postponed action on the classification of the Boreas Ponds this month. The APA had planned to unveil its proposal for these lands in March and make a decision in April. The schedule going forward is uncertain.

The Cuomo Administration is divided on how to best manage the Boreas Ponds and as a result, it has no final plan for classification. Top staffers to the Governor and top brass at the Department of Environmental Conservation (DEC) are vacillating between two main options.

The preferred option of the Governor is to create a small Intensive Use area at the south end of the Boreas Ponds, from the 4 Corners area to the dam. The Cuomo Administration is trying to figure out how it can create a new small Intensive Use area that would have formal lodging, such as yurts, small cabins, tent platforms, perhaps some kind of hut-to-hut lodging facility, or some combination of these. The Intensive Use area would ostensibly be surrounded by Wilderness lands, but the Gulf Brook Road would remain open, the Boreas Ponds dam would be retained, as would an access road to the dam.

If cramming a hodgepodge of uses onto a landscape seems familiar it’s because the Governor and DEC are using the same guiding principle for the Boreas Ponds that they used for the Essex Chain Lakes â€“ something-for-everybody. The Governor and DEC start planning with a set of public recreational uses that they want to see in an area and then start drawing lines to connect the dots. Questions about what the lands can support, about the science and ecology of the tract, about how a tract fits into a larger system, and about compliance with the State Land Master Plan are distant considerations.

The Intensive Use area option marks a sharp departure from the various options for which the APA prepared an Environmental Impact Statement (EIS) and held public hearings at the end of 2016. In fact, what the Cuomo Administration has settled on for its first choice was rejected by most of the commenters. Different analysis has shown over 80% of those who submitted comments wanted Wilderness for the Boreas Ponds. (Then again, ignoring the public will has been a cornerstone of the Cuomo APA.)

There are many obstacles to the Intensive Use area scenario. First, state law is clear that DEC cannot rent out cabins and structures on Forest Preserve and other DEC lands. Tent sites, yes; cabins, no. The Office of Parks, Recreation and Historic Preservation rents out cabins at various state parks. There is a big difference in state law between Forest Preserve and state parks. Then there is another practical problem in that this classification is at odds with State Land Master Plan Intensive Use area guidelines. The biggest obstacle is the Forest Preserve protections under the State Constitution. Historically, this fight on “closed cabins” was fought a long time ago and New Yorkers chose a Forest Preserve with lean-tos and campsites and not cabins.

At a minimum, the APA would have to issue a new EIS and hold a new round of public hearings for the Intensive Use area option. If they were to include buildings of any kind, they would be violating state laws and the State Constitution.

Other aspects of the classification involve planning for motorized access and a campsite near the Boreas Ponds for CP-3 permit holders (disabled access) and to manage the Boreas Ponds as motorless. As to the Gulf Brook road, it would be kept open to access the Intensive Use area and a canoe launch (the site of which is in flux). It’s unclear at this moment where the state’s thinking is on the route of a Newcomb to Minerva snowmobile trail as there are competing options, but one involves the Boreas Road-Gulf Brook Road while others utilize only the southern parts of the Gulf Brook Road.

This is a discouraging, though not an unexpected turn of events. The Cuomo Administration made it abundantly clear early on that they take a dim view of Wilderness, were committed to building an east-west community connector snowmobile trail through these lands, and that land acquisition under Andrew Cuomo must have an economic development component.

Nevertheless, the Boreas Ponds is far too important for such shortsighted planning. These lands contain ecological gems that demand the state’s highest protections. The Governor should use the time to step back and reflect on what is working and what is not working on the Forest Preserve. 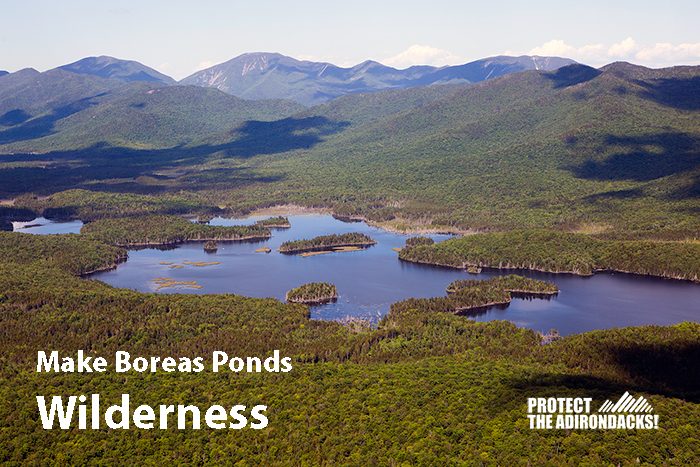 What is not working is the Essex Chain Lakes classification. It has been a failure. 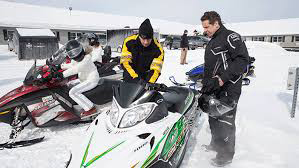 The Cuomo Administration went all-in with something-for-everybody planning at the Essex Chain. There is motorless canoeing, a wide and long motorized Wild Forest corridor, new motorized bridges, bike riding, DEC patrolling in motor vehicles, public motorized access to the heart of the Essex Chain Lakes, roads (like that between Third and Fourth Lakes with “The Tube”) were retained when they should have been removed and the filled wetland restored, and there is CP-3 access. In an effort to maximize public recreational opportunities, the opposite has happened. Public use has been light because nobody knows what to expect. A hodgepodge of uses alienates public use, rather than heightening it. Those who want a Wilderness experience go to other places where they can get a Wilderness experience. Paddlers are not enthusiastic about paddling where people drive motor vehicles and ride bikes. The bike riding on sandy and rocky dirt roads is crappy so few do it. Hiking on dirt roads is unappealing for most. Hiking in an area where the DEC drives motor vehicles is even more unappealing. Poor planning begot a poor classification, which begot low public use. The low numbers at the Essex Chain Lakes are irrefutable.

And now, Governor Cuomo and the DEC seems prepared to double down with the same approach and the same set of poor planning principles at the Boreas Ponds.

The good news is, of course, that these amazing lands are Forest Preserve and now belong to the people of the State of New York. For that we are indebted to Finch, Pruyn & Company, the Nature Conservancy, and Governor Cuomo. Under every classification scenario for the Boreas Ponds tract, far more roads will be closed than retained. The forests will grow wilder and older. Log landings and tote roads will reforest. And over the decades, as we ring in years like 2030, 2050 and 2075, the inexorable powers of nature will restore the forests that surround the Boreas Ponds, and the promise of the Forest Preserve will continue to shine as a bright place on New York’s landscape, and management decisions can be revisited and mistakes can be corrected.