A new plan has emerged from the Saratoga & North Creek Railway, an arm of Iowa Pacific Railway Company, to store hundreds of old, dilapidated railroad cars, supposedly mostly boxcars, on siding track and unused rail lines in Warren and Essex Counties. These rail cars would be stored “indefinitely” on these rail lines. Saratoga & North Creek Railway leases rail lines from Warren and the Town of Corinth and owns the Sanford Lake Rail Line in Hamilton and Essex County. The plan was announced at a Warren County Board of Supervisors meeting last week.

Saratoga & North Creek Railway stated that it plans to store “hundreds” of old railroad cars. The Adirondack Park has never been used for this purpose. This is a critical moment in the history of the Adirondack Park and for all the reasons below, we urge you to take action and block this ill conceived plan. 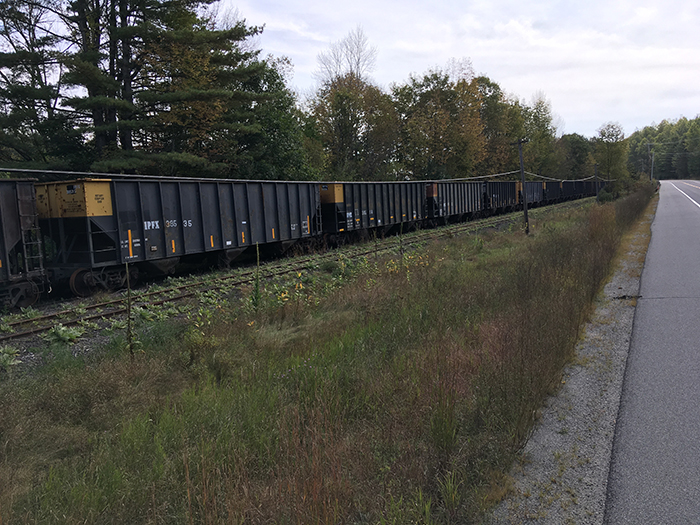 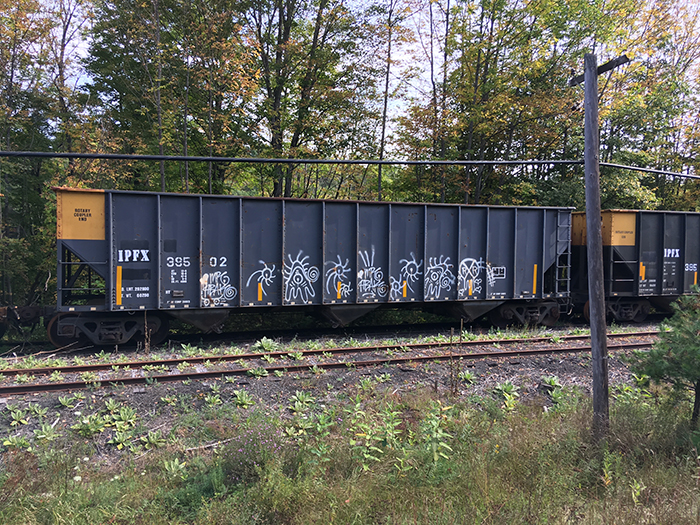 Two pictures of old railroad cars stored on tracks leased by Saratoga & North Creek Railway Company outside of North Creek. These railcars are a visual blight on scenic section of Route 28 along the Hudson River.

State of Saratoga & North Creek Railway Must be Desperate if this is Their Only Viable Option: The Saratoga & North Creek Railway states that using the rail lines that it owns or leases for storage of old railroad cars is the only way it can make money. If this is a reality, then it shows that the scenic railway from Saratoga to North Creek is a failure. Further, if the company undertakes this activity then it is stating that it has no viable business opportunity for using the tailings and rock at the Tahawus Mine as storage of rail cars will block the use of the rail lines for any other purpose.

Storage of Used Rail Cars Violates Longstanding APA Precedent: In the early 1990s, Governor Mario Cuomo stood behind the Adirondack Park Agency (APA) Commissioners when they passed a resolution that the Adirondack Park should be used to handle locally generated garbage and waste, but not used to handle outside waste. This principle was upheld in 1995-1996 by Governor George Pataki, who rebuffed an effort by Essex County leaders to sell the Essex County landfill to a company that wanted to make it a major regional landfill â€“ a giant Fresh Kills Landfill north. We urge your administration to stand with long established precedent and not allow the Saratoga & North Creek Railway to import waste into the Adirondack Park.

Storage of Used Rail Cars Must be Investigated as a Regulated Activity under the APA Act and Environmental Conservation Law: Our initial research raises many questions about the regulatory status of a railroad once it is no longer used for transport, but used for long-term storage of rail cars, whether on a main track or siding. Such a transition appears to constitute a new commercial activity that should be subject to local control. We’ve seen many cases over the years where small businesses in the Adirondacks had to secure new commercial use permits from the APA is order to utilize an existing building. We believe that the proposal of Iowa Pacific to utilize the Sanford Lake Rail Line constitutes a new commercial use.

Pictures of railcars already being stored on the Sanford Lake Railway owned by Iowa Pacific Railroad in a section of railroad in the Vanderwhacker Wild Forest Area.

Deterioration of Existing Stored Rail Cars on Sanford Lake Rail Line in Essex County and in Warren County: The Saratoga & North Creek Railway is already storing dilapidated railroad cars in limited numbers on portions of its rail lines. In the Town of Johnsburg in Warren County, over 20 rail cars have been stored for more than a year on a section of track on the banks of the Hudson River outside of the hamlet of North Creek. Storage of these rail cars mars a scenic corridor of Route 28 along the Hudson River. Additionally, other old passenger cars have been stored on a stretch of siding of the Sanford Lake Rail Line in the Town of Minerva in Essex County located in a wetland along the Boreas River. These cars are in disrepair and are falling apart. They had been vandalized and trash was evident. Most disturbing was places where the rail bed is littered with piles of paint chips that have fallen from an old rail car and are soaking into the track and ties.

The poor storage of these cars does not give us much confidence in Saratoga & North Creek Railway/Iowa Pacific’s claims that there will be no negative environmental impacts from long-term storage of other rail cars on its rail lines.

Visual Blight: Plans to store hundreds of dilapidated rail cars on remote and unused rail lines in the Adirondack Park, mostly in the Forest Preserve, will be a visual blight in the Adirondack landscape. The locations where the railcars will be stored run primarily through the Forest Preserve, including a vast stretch in lands recently purchased by the state along the Hudson River and in areas of the Vanderwhacker Mountain Wild Forest area along the Boreas River. The Sanford Lake Rail Line runs predominantly along the banks of the Hudson or Boreas River and storage in these areas undermines the “forever wild” Forest Preserve. These rail cars will have to be transported on a bridge over the Hudson River where it is run by thousands of rafters every week.

Time for a Fresh Look: The Saratoga & North Creek Railway is failing. It’s time to take a fresh look at other uses. One obvious use is conversion to a multi-use pedestrian trail. Warren County well knows the benefits of a rail-trail conversion from the wildly popular Warren County Bike Trail in Glens Falls, Queensbury and Lake George. The rail trail has been the catalyst for a number of successful businesses and is used by people of all ages.

It’s time to take a hard look at getting out of the railway contracts in Warren and the Town of Corinth, purchasing the Sanford Lake Rail Line, and converting the rail line to some kind of multi-use pedestrian trail. This would be a true community-to-community trail from Saratoga Springs to Newcomb, a European style countryside walking trail, a bike trail, a totally accessible trail, a cross country ski and snowmobile trail, and it already has both a wide defined corridor and connects hamlet areas. The dividends for the region and for communities along the rail line would be far greater with a community-to-community pedestrian trail than with a dying railroad whose only viable revenue stream comes from trashing the Adirondacks.

For all of these reasons, Protect the Adirondacks opposes this plan and urges Governor Cuomo to take a stand for the Adirondack Park and defend our natural resources and rural communities and reject this unwise and ill-considered plan.