I recently walked the stretch of the Remsen to Lake Placid Railroad corridor from where it crosses the Old Military Road near the firehouse in Lake Placid to where the Scarface Mountain hiking trail crosses the tracks. It’s a bit over four miles. The rails have been removed, and there were small piles of them stacked on the rail side, and many of the ties were loose. There were steel plates that held the rails to the ties and lots of railroad spikes were strewn on the disheveled ties. The removal of the steel rails is the first stage of the transformation of this long-defunct railroad into a public multi-use recreation trail.

The railroad corridor is thickly forested, mostly typical northern upland forest at the Lake Placid end, but cuts through boreal habitat and wetlands with some stands dominated by red pines. The rail corridor shares space in this stretch with the utility lines to Lake Placid. The poles have all been recently rebuilt and the new fiber optic line hangs on them. 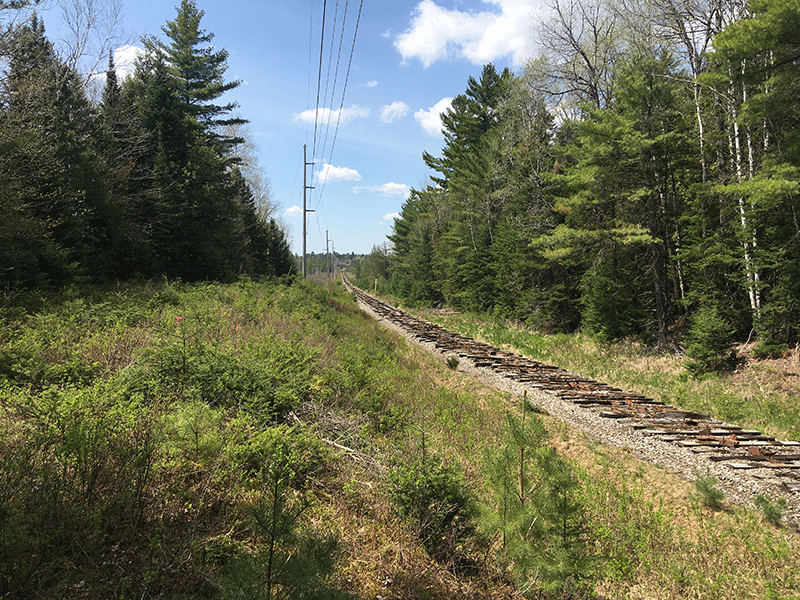 The forest stands tall on both sides of the rail line and dwarfs the utility poles. The intricate beauty of the forest, shown in a continuous museum gallery display of the forest floor and lush understory on both sides of the trail, overwhelms the utility lines. The trail is bordered by a half dozen wetlands and then runs along the meandering Ray Brook. When I reached Ray Brook, the fairways of the Saranac Lake Golf Club could be seen through the trees. I threw a few golf balls from the tracks through the trees back onto the course.

In this stretch, the rail corridor has been maintained and there appeared that there would be very few trees needing to be cut down to undertake trail conversion work. I was happy to see, at least on this stretch, no Article 14 tree cutting issues. 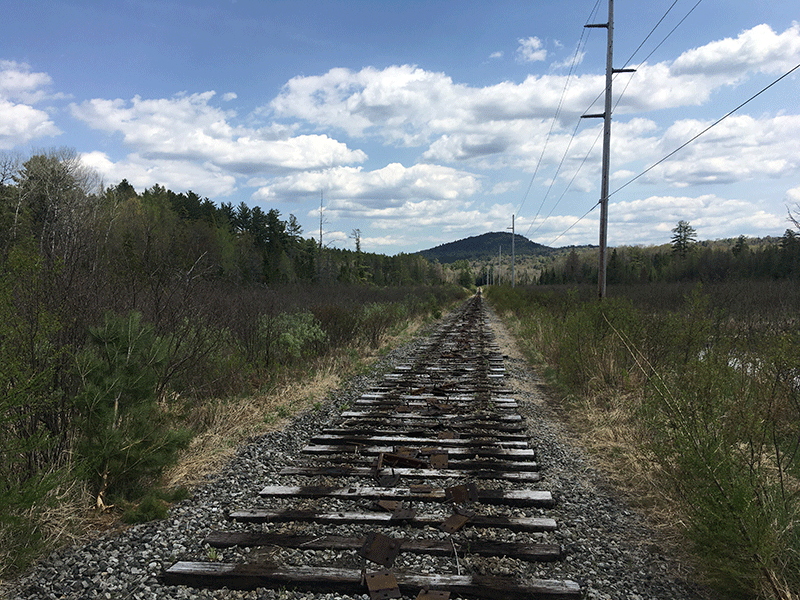 Between Lake Placid and Ray Brook, there were three major bridges and a half dozen culverts. The bridges looked sturdy and in good conditions. Built to hold trains, I imagine they can hold people on snowmobiles and bikes.

In the sections that wind through downtown parts of Lake Placid, Saranac Lake and Tupper Lake, I imagine that this trail will be popular for people walking and running. It’s far prettier than walking or running around town and the new trail surface will probably be smoother than road shoulders or sidewalks.

In the winter, the trail will principally be a snowmobile trail, though as fat-tire biking grows in popularity, winter biking could take off. I think this trail will be popular with snowmobilers. The rail corridor rises or drops with very gentle, gradual grades. I do not think it will be great cross-country skiing, it’s pretty flat and will not be nearly as fun as something like the Jackrabbit Trail, but given the width of the trail and the fact that it will be groomed for snowmobiling, I foresee it being popular for those who enjoy skating on their cross-country skis.

This trail will be a true multi-use trail. State agencies regularly approve fictional “multi-use” trails in the Forest Preserve, but these are principally designed as snowmobile trails and receive next to no use for hiking, mountain biking, or horseback riding. This trail, I’m confident, will see huge numbers of bicycle riders, walkers and runners, in addition to big numbers of snowmobiling. A true multi-use trail in fact, not fiction. 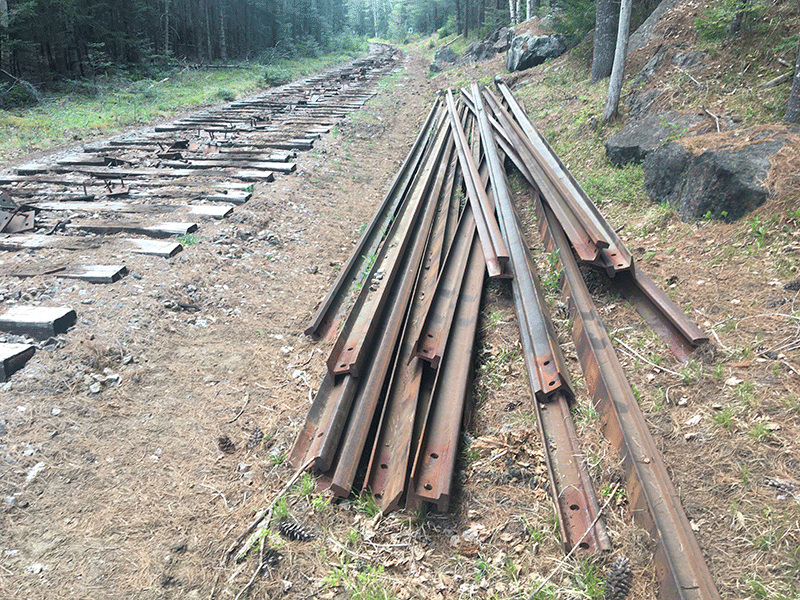 This trail runs close to residential areas in Lake Placid and Tupper Lake, but it runs through many different neighborhoods as it winds through the heart of downtown Saranac Lake, passing numerous residences so close one could easily hit them with a snowball from the tracks. In Lake Clear, the railroad runs within a few dozen feet of some residences. I’m not worried a bicyclists or roller-bladers or roller-skiers or runners whizzing through residential areas early in the morning or late at night. However, I do foresee issues with loud snowmobiles operating late at night and communities pushed to enact speed limits and hours of operation and setting up DUI checkpoints.

From Lake Clear to Tupper the trail passes through some quiet and remote places, deep in the Forest Preserve. The trail runs on the shores of Hoel Pond and Floodwood Pond and through a massive wetland bog west of Lead Pond. The trail will change things at Floodwood Lake, where it passes close by a series of secluded private cabins, their own slice of paradise heretofore, they will be secluded no more.

Yet, this stretch from Lake Clear to Tupper Lake will also arguably be the most beautiful stretch of the new trail, perhaps the most beautiful stretch of bike trail anywhere. There are no utility lines and the rail line twists and turns, and runs along lakes and ponds and massive wetlands, which provide sweeping views of forested hillsides and ridges. This area will have the longest stretch between road crossings where bicyclists can tune out the world and pedal away lost in their thoughts. The section from Saranac Lake around Lake Colby is also visually stunning. 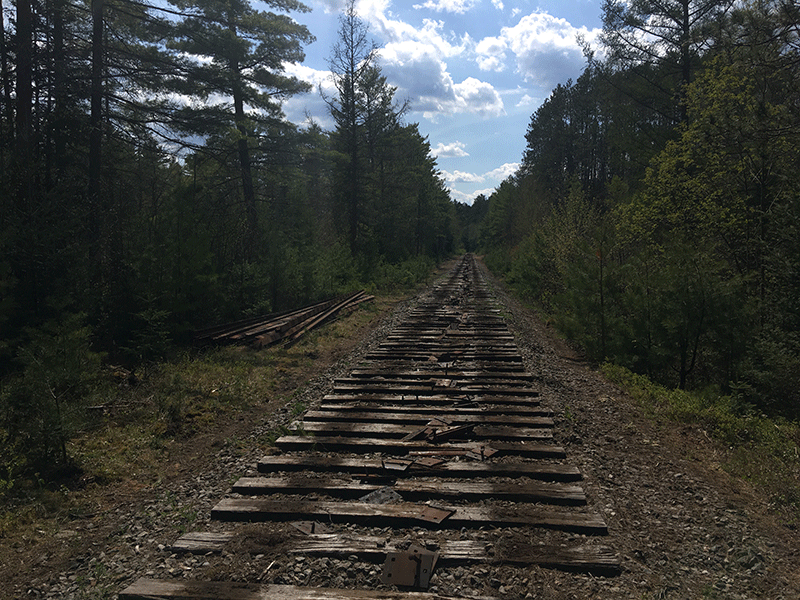 I think this trail will be knockout. I think that the use of this trail all year-round will be off the charts. I think this trail is a great long-term investment in the Adirondack Park that builds the quality of life for residents and will bring people to visit. This trail will link together the communities of the tri-lakes in a way they have not been linked before, though it will not be without its hiccups and controversies that the state and communities and trail users will need to work through.

Further down the road, I think that the success of this trail will inspire transformation of the North Creek to Saratoga Railroad into a 55-mile multi-use trail. A potential rail trail from North Creek to Saratoga Springs will ride along the banks of the Hudson River for 20 miles and provide dozens of grand views of the river and beyond. When that trail gets built, it too will be a knockout and transformational for Saratoga Springs at the south end and North Creek at the north end, and for Stony Creek, Thurman and Lake Luzerne, among other communities, in between. 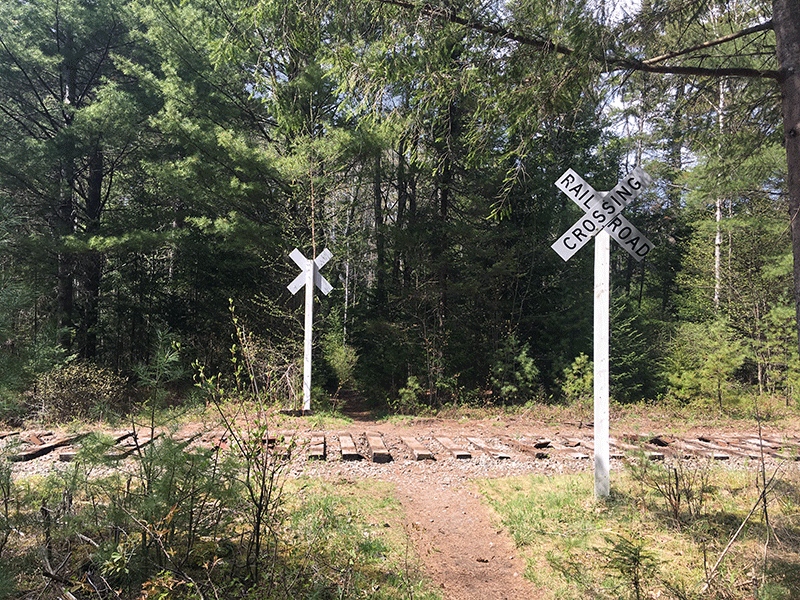 A popular snowmobile trail and bike trail that runs along Hitchin’s Pond and near Lake Lila will change things in places I hold dear and have enjoyed over the years as I watched them grow wilder. I don’t think the idea of ripping up the rail line from Tupper Lake to Thendara, where it passes among different Wilderness Areas, and rewilding the rail corridor will ever get a real hearing.

I think the success of the trail at the north end will inspire the greater Old Forge community to see that they will benefit enormously by being the southern gateway to this multi use trail. Extending the multi-use trail south of Tupper Lake to Thendara will make the snowmobilers happy, but it will also provide a unified bike route like no other.

This trail is a big moment for the Adirondacks. Hats off to all who got us here and made it happen.