The problem with buildings on the Forest Preserve, part 2

The management of historic buildings on the Forest Preserve has been a vexing issue for decades. State management has evolved over the years from a position of building removal to now accommodating historic buildings on the Forest Preserve through the creation of a “Historic” area classification. The state has since built a policy of retaining buildings for public educational and historic preservation purposes. The Historic area classification has been used most notably for Great Camp Santanoni and the two state parks that preserve historic areas â€“ the John Brown Farm in Lake Placid and the Crown Point Historic area. Since the Pataki Administration, the state has invested millions of dollars to sustain and restore Great Camp Santanoni.

This is the second part of a 3-part series on buildings on the Forest Preserve. The first dealt with buildings used for state administration and the third deals with public residential use through a formal lodging network.

The journey towards “Historic” areas on the Forest Preserve is a storied one, and has its own history. The first edition of the Adirondack Park State Land Master Plan in 1972 did not list “Historic” as a classification option. The Historic classification was added with the first revision in 1979. The Carey Administration in the late 1970s saw its Commissioner of the Department of Environmental Conservation (DEC), Peter A. A. Berle, remove the Ranger cabin in the West Canada Lakes area and remove the Ne-has-ne Lodge at Lake Lila soon after the state purchased the lake. Berle also took down several firetowers, most notably on Kempshall Mountain in the High Peaks Wilderness Area. 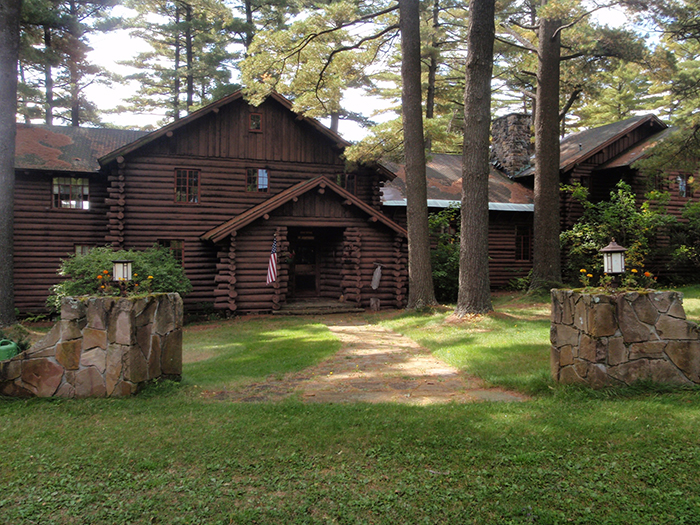 The main building of the Debar Lodge complex. These buildings were purchased in the 1980s along with thousands of acres of forests around Debar Pond. Private owners retained use until 2005. These buildings stand and are being maintained though the State of New York has not determined a use for these buildings. They are in an area classified as Wild Forest.

Other means have been used to protect historic buildings on the Forest Preserve. The most common is the use of a private inholding around the building’s footprint. For instance, the Lighthouse on Valcour Island is owned by the Clinton County Historical Association, but is surrounded by Forest Preserve classified as Primitive. Similarly, the cabin at Preston Ponds and the Mt. Adams Firetower have been preserved as private inholdings in the High Peaks Wilderness Area. Great Camp Sagamore is also a private inholding, straddling the Moose River Plains Wild Forest and Blue Ridge Wilderness Areas, a management decision set up by two Article XIV Constitutional Amendments. The Upper Works and ruins of the community of Adirondac were protected by conservation easements.

Though these sites have been preserved, there remains a chorus across the Adirondacks that say Camp Santanoni should have been allowed to fall down and go back to the bears and that the firetowers on St. Regis and Hurricane Mountains should have been removed.

The Adirondack Park State Land Master Plan sets out management standards for Historic Areas in which buildings on the Forest Preserve are maintained. This management classification has been used for state parks at John Brown’s Farm and Crown Point fort as well as for Camp Santanoni and the spot-zoned firetowers on Hurricane and St. Regis Mountains. The Master Plan defines Historic areas as such:

Historic areas are locations of buildings, structures or sites owned by the state (other than the Adirondack Forest Preserve itself) that are significant in the history, architecture, archeology or culture of the Adirondack Park, the state or the nation; that fall into one of the following categories;

– state historic sites;
– properties listed on the National Register of Historic Places;
– properties recommended for nomination by the Committee on Registers of the New York State Board For Historic Preservation; and that are of a scale, character and location appropriate for designation as an historic area under this master plan and the state has committed resources to manage such areas primarily for historic objectives. (p 46)

1. The primary management guidelines for historic areas will be to preserve the quality and character of the historic resources, that is, to the greatest extent feasible, in a setting and on a scale in harmony with the relatively wild and undeveloped character of the Adirondack Park.

2. All historic areas will be designed, managed and interpreted so as to blend with the Adirondack environment and have the minimum adverse impact possible on surrounding state lands and nearby private holdings.

3. Construction and development activities in historic areas will:

The Master Plan sharply limits the scope of how buildings that are retained for historic purposes can be managed. The primary purpose is historic preservation and these buildings are to be managed in harmony with the surrounding Forest Preserve. As such, they are living museums in the Forest Preserve that are available for the public to visit, but are not places to be used for residential or lodging purposes. Management of Great Camp Santanoni has been austere and closely regulated; buildings have stabilized and restoration has been slow work.

In the 1980s, the state purchased Debar Lodge, a collection of two dozen buildings. Under the terms of the state’s purchase, the private landowners retained use of the Debar Lodge until 2005. The lodge has been mostly empty since then, though there have been reports of state employees occasionally occupying the facility, and today some one is mowing the expansive lawn and maintaining the grounds of an area classified as Wild Forest. No formal decision has been made on the future management purposes or policy implications for retaining Debar Lodge. The DEC has embarked upon a new Unit Management Plan (UMP) for this area, which may attempt to sort out these issues. No information has been provided for how this complex of buildings will be preserved, used, managed, or the costs involved. 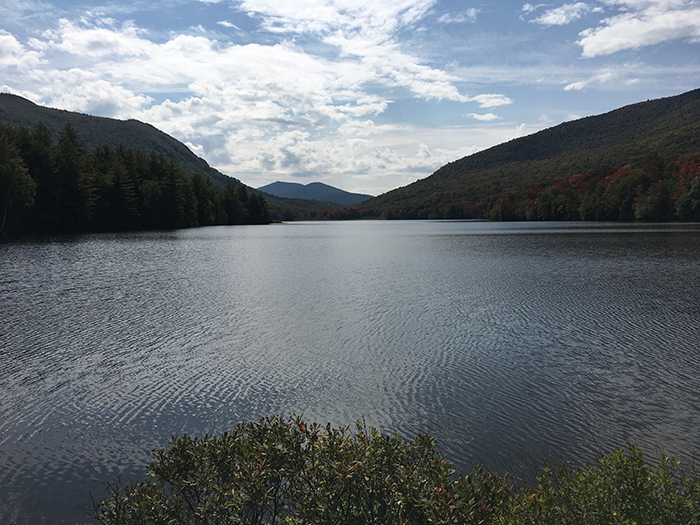 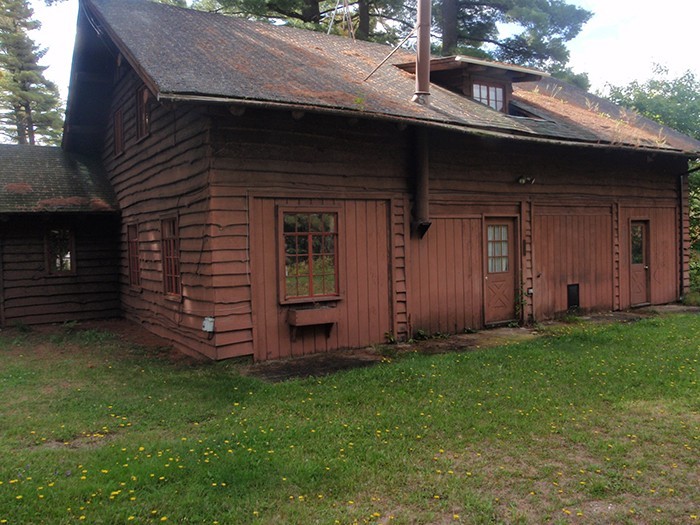 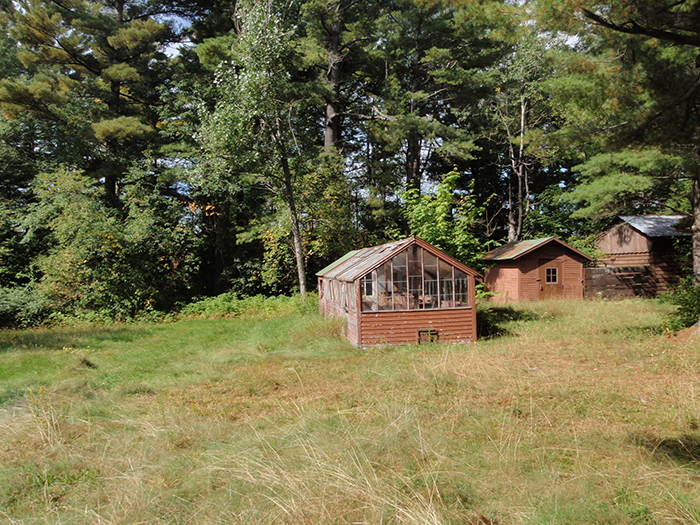 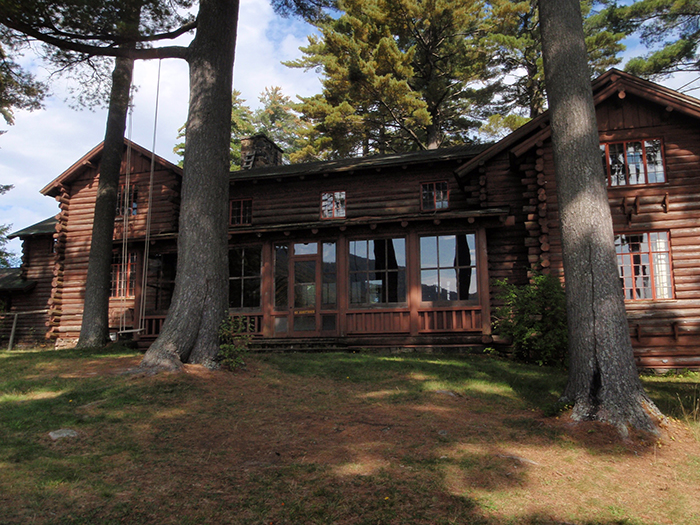 The pictures above show various outbuildings or the main lodge of Debar Lodge. The picture at the top is Debar Pond. The complex has over 25 buildings and a large mowed lawn.

In general, the use of a Historic Area classification has worked with Camp Santanoni and the two state parks. Camp Santanoni has been stabilized and is slowly being restored, and stands as a living museum mostly for self-guided tours by the public. If the state plans to undertake similar programs for the Debar Lodge, the farmhouse on the Hudson River, or the 4 Corners cabin, it must classify these areas as Historic and figure out how it’s going to pay for them. In the case of Debar Lodge, the state also needs to answer the question: How many Great Camps does the State of New York need to maintain?.

The Commission on the Adirondacks in the Twenty First Century, created by Governor Mario Cuomo, published two volumes of technical reports. In one, a former Executive Director and Counsel of the Adirondack Park Agency (APA) authored a paper on the “doctrine of inconsistent use” of the Forest Preserve. Under state law all state lands in the Adirondack Park are part of the Forest Preserve. In theory, this includes all state lands, such as the state administration complex of buildings in Ray Brook, Department of Transportation sites throughout the Park, state prisons and mental health facilities, among other areas. The acreage of all these areas is substantial and these facilities are important for overall management of the Adirondack Park.

The Forest Preserve in New York in the Adirondacks and Catskills, though 3 million acres, though constitutionally protected, though heavily used and enjoyed by the public, though guided by many volumes of state law, policies and regulations, has always been a work in progress, managed according to the conflicting and competing interests of the times. The Historic areas is Exhibit A in the doctrine of inconsistent use, yet is also a rational program for a place like Camp Santanoni, yet irrational for the Hurricane Mountain firetower. The Historic area classification is also Exhibit A for the definition of a slippery slope. The plot will only thicken as the states tries to figure out management for Debar Lodge, the farmhouse on the Chain Lakes Road and the 4 Corners cabin near Boreas Ponds.