Recruitment of new people to live in Adirondack communities is all the buzz. It’s a central focus of the Common Ground Alliance, which contracted for a plan of action for communities with ambitions to recruit more people to move there. While Adirondack communities recruit young professionals after ages 35 and 45 years old in low numbers and retirees in higher numbers, a premium has been placed on recruiting young adults with young children or young adults who may have children once they move here.

The first trend is that population growth in the U.S. over the last several decades is largely an urban-suburban phenomenon and is not a major factor in Rural America. From 1970 to 2010, the United States saw its population grow from 201.1 million to 305.6 million. (We do not yet have 2020 Census numbers.)

However, that same time frame saw the population in the 1,941 counties of Rural America (there are roughly 3,100 counties in the entire USA) rise from 35.9 million people to 45.4 million. That means that as urban and metropolitan areas jumped by 50% and added over 95 million people by births or immigration from abroad, Rural America saw an increase of 25%, adding just 9.5 million people.

Within Rural America, there are also differences. More than half of the population growth in Rural America was in roughly one-third of high population rural counties that are closer geographically to metropolitan areas, while the rest was spread across the low population rural landscape that covers more than 60% of the continental U.S. land area – a thinly populated landscape similar to many Adirondack communities.

What this means for Adirondack leaders and planners is that population growth has been largely limited to bigger rural counties and counties near metropolitan areas. It also means that there are lots of places in Rural America thinking about ways to try and attract a fairly small pool of potential new residents who may want to move to the most rural parts of the country. 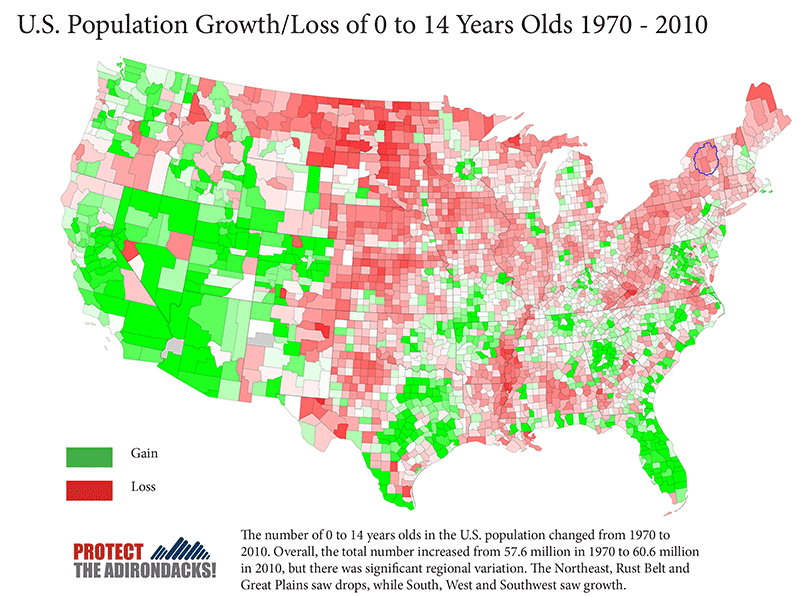 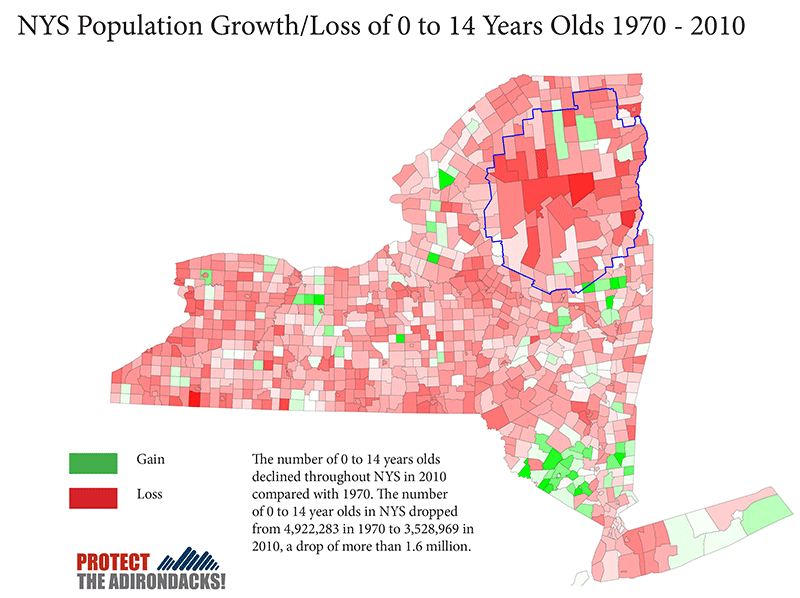 Now, many folks will say that the drop in the total number of young children in Adirondack Park towns or Rural America is because of an attendant drop in the number of adults of child-bearing age, say people 25 years old to 44 years old. Here, though, the plot thickens, multiplying the challenges facing those in the population recruitment business. The reality is that there were many more adults age 25 to 44 years old in 2010 than there were in 1970 in both Rural America and Adirondack Park towns. 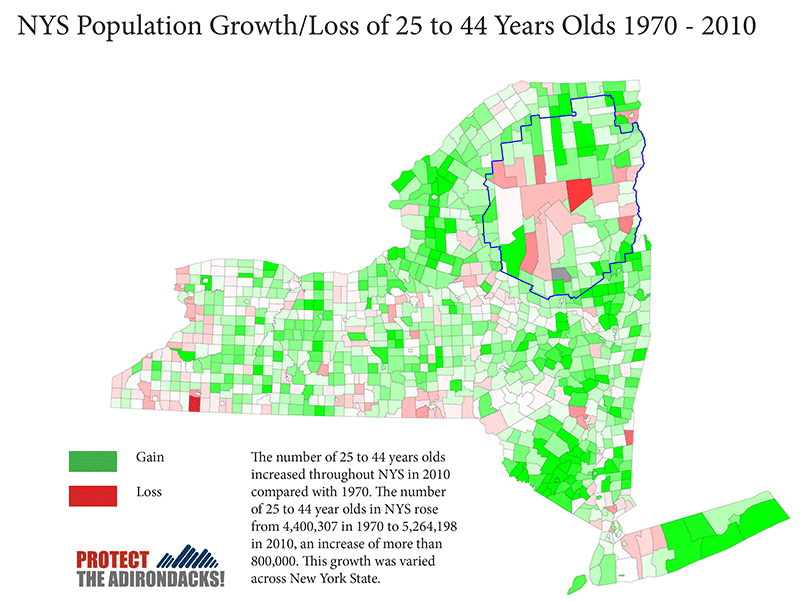 The 25 to 44 years old age pool of adults is not just crucial for being of prime-age to reproduce, but these are folks organizing their careers, opening businesses, putting down roots, and helping to build communities. That Adirondack Park towns have seen this pool grow over the decades is important economically as well as socially. 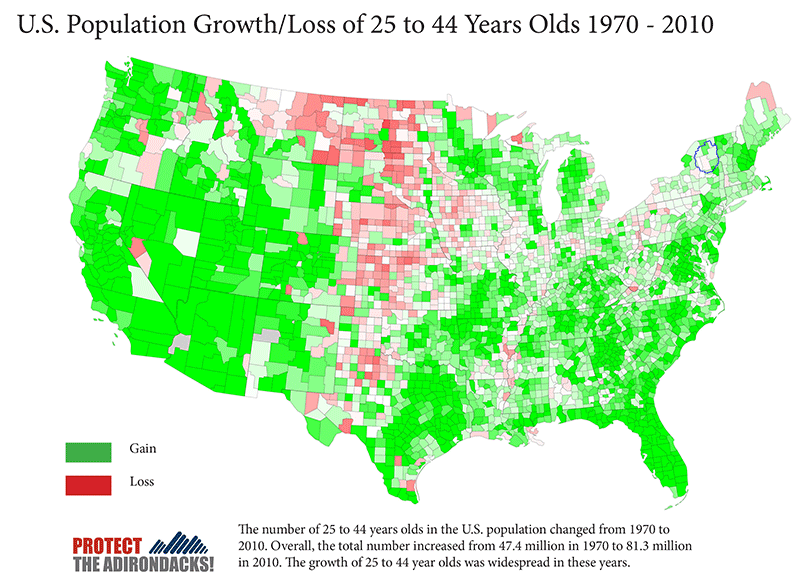 The inescapable point is that our adult pool is having fewer children. We’re a population of 1- and 2-child families. Over the years, that depresses school populations. As we’ve seen from the data above, the trend of small families is likely to continue, if not intensify with even smaller families. This means that even as we are successful in attracting a sizable number of young adults to move to the Adirondacks (and for a rural area the 92 Adirondack Park towns have done fairly well with recruitment), the reality is that this will not end the slow, incremental decline in school district enrollments throughout the Adirondacks (as well as throughout Upstate New York). School district enrollment is not a good indicator for rural community vitality, though it’s cited all the time.

The adult population of today, not just in the Adirondacks, but across New York and many parts of Rural America, are simply not birthing the number of children that previous generations birthed. The baby-boomer families of the 1940s, 50s and 60s were large, but Generation Xers and Millennials who followed chose to have fewer children. The size of American households has been shrinking for decades. The trend of small families is a tough trend to change, but it’s a key factor shaping the Adirondack population dynamic. More importantly, we should ask if that’s a trend that we want to change? Click here to see maps of NYS and the U.S. that show these long-term trends.

Here’s the third trend, and this one too is a tough nut to crack. The 92 Adirondack Park towns are located geographically in New York State. There’s nothing that we can do about that. From 1970 to 2010, New York State gained about 1.1 million people, rising from 18.2 million to 19.3 million. In 1970, New York had 4.4 million residents 25 to 44 years old and in 2010 it had 5.2 million people in that age range. As the number of young adults grew, the population of children 0 to 14 years old went the other way and dropped from 4.9 million to 3.5 million. Again, the reality is that small families is not just an Adirondack Park thing; it’s a New York State thing too. The other reality about New York is that population gain is a Downstate thing and population loss, with some minimal exceptions, is an Upstate thing. From 2000 to 2010 these trends intensified. 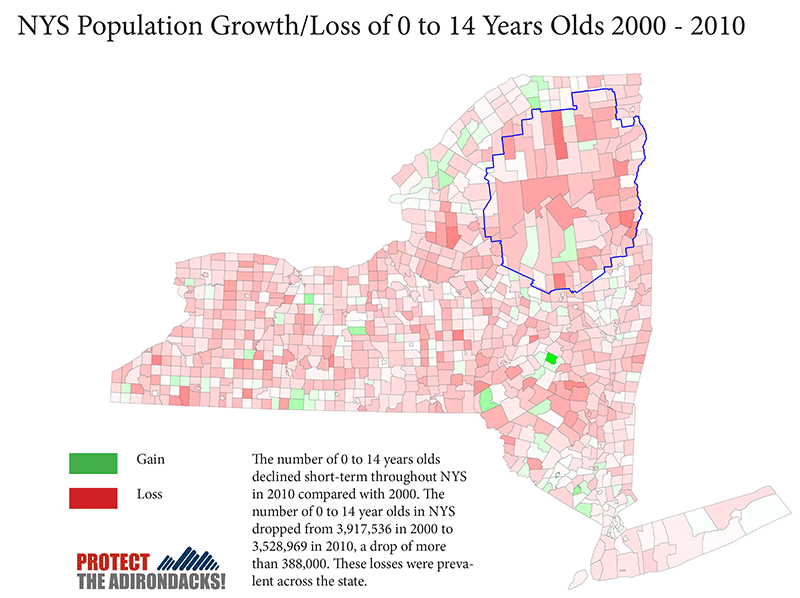 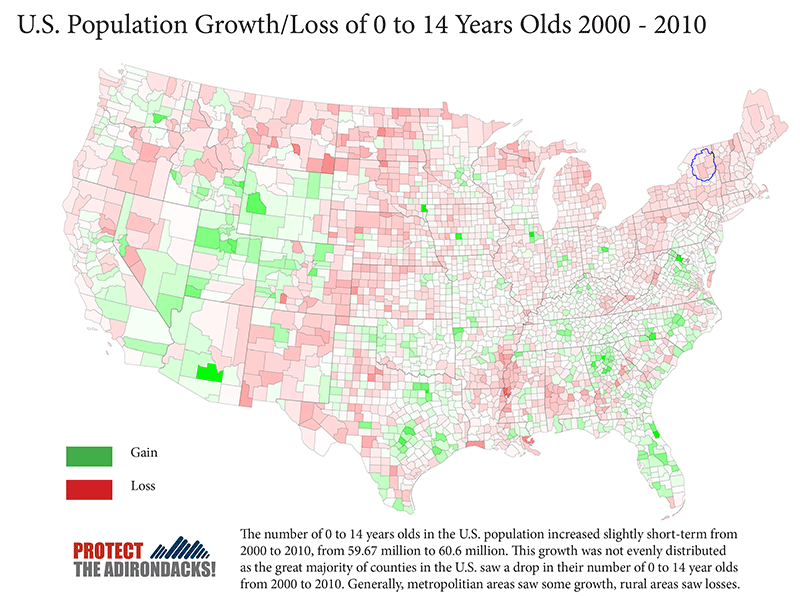 From 2000 to 2010 this trend intensified as is shown in the maps above. From 2000 to 2010 the number of 0 to 14 year olds in New York State dropped by over 388,000, even as the total number increased in the U.S. For Adirondack population recruiters, the most fertile field for bringing in new residents is plucking them from other New York communities. These communities, however, are places with fewer and fewer children.

The fourth trend is that what the baby-boomers giveth, the baby-boomers also taketh away. In the U.S. in the three decades after World War II, from the mid-1940s through the mid-1970s, America saw its greatest population gains. A high birth rate for 30 years was the rule of the land, followed by decades of relatively high immigration from abroad. Rural America experienced growth like the rest of the country, but now Rural America is experiencing a population contraction as baby boomers are aging and dying. This population phenomenon of expansion and contraction is consistent across Rural America.

While we’ve seen major overall population gains from 1970 to 2010 in the U.S., and modest gains in Rural America, our population in Rural America has changed considerably. Beyond the sharp drop in children 0 to 14 years old due to small families, we’ve seen major changes wrought by the significant expansion and contraction of the number of 25 to 44 year olds across Rural America. There’s a clear pattern of growth 1970 to 1990, as the baby-boomers came of age, followed by a decline 1990 to 2010 in the number of 25 to 44 year olds, even as the overall population increased. The baby-boomers who chose to build their lives in Rural America often also chose to have smaller families than the households in which they were raised.

This population expansion and contraction phenomenon is still working its way through the American and New York State populations. Population recruiters should be aware that in total numbers there were over 3 million fewer 25 to 44 year olds in 2010 than there were in 2000 in the U.S., which shrinks the vital pool recruiters seek to lure to the Adirondacks. In New York, this vital pool shrank by over 500,000 from 2000 to 2010. A grim reality is that population predictions call for this trend to continue into the 2020s and beyond towards mid-century. The dynamic population that Adirondack population recruiters seek to bring here is shrinking. Click here to see maps of this decline 2000 to 2010. 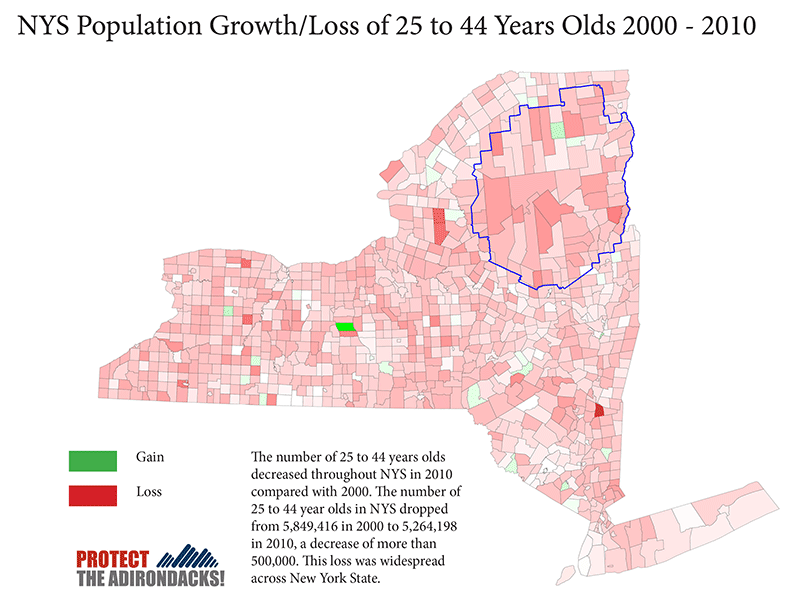 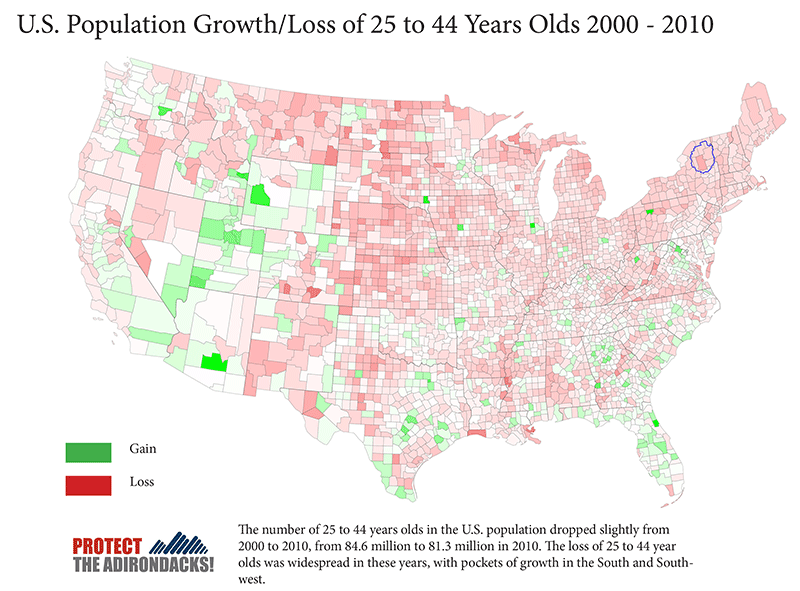 The fifth trend is that immigrants from abroad do not choose to relocate to Rural America in large numbers. That said, the parts of Rural America that are seeing population growth are mainly due to immigration from abroad. Rural areas that successfully attract new residents who are non-native-born Americans are the rural places that are growing. There are lots of reports and studies about how non-native-born Americans who move to rural areas transform and revitalize their new communities.

There are serious efforts underway, such as the Adirondack Diversity Initiative, to address the factors that make Rural American communities like the Adirondack Park unattractive to non-native-born Americans and people of color in general. More needs to be done on this issue, but the reality is that immigrants from abroad play a considerable role in driving population growth in metropolitan areas of the U.S. And these people are choosing in great numbers to live in metropolitan areas, forgoing the option of life in Rural America. This is another trend that will be tough to change.

The same population realities facing Rural America are facing Adirondack communities. Our population dynamic in the Adirondacks, like much of Rural America, is driven by enduring national trends of baby boomer expansion and contraction and there’s nothing we can do to stop baby boomers from aging and dying. We also can’t force people who choose to live in the Adirondacks, or who choose to move here, to have bigger families. And, so far, the Adirondacks and Rural America have not figured out how to convince large numbers of immigrants from abroad generally, and people of color specifically, to relocate to their small communities in high numbers.

From 2000 to 2010, the 92 Adirondack Park towns, both those fully within the Park and those split by the Blue Line, grew by just over 1%. The 61 towns that are fully within the Blue Line saw a population loss of just over -1%. There were plenty of places in Rural America with even greater population losses. These overall trends will likely continue where the bigger communities in and around the Adirondacks grow slightly, and the smaller, more remote communities in the Park’s interior shrink slightly. These realities are generally driven not by local or regional decisions, but by the powerful national trends elucidated above, though singular events like mine or mill closings can accelerate these trends in individual communities.

Population recruiters may also want to focus their efforts on the population over 45 years old and try and get second career people and early retirees to relocate to the Adirondacks. These folks generally have financial resources, can buy or start businesses. They’re not going to help with declining school enrollment numbers, but they can help to provide important social and economic capital in the Adirondack region.

The good news for Adirondack leaders and planners in the population recruitment business is that the numbers we’re talking about are small. Tiny, really. The 61 towns in the Adirondack Park’s interior saw a loss of 1,200 people from 2000 to 2010. The math to reverse this trend is to figure out how to attract 120 people a year, or 60 couples, to any of these 61 towns, from Caroga to Franklin, from Clifton to Warrensburg, from Essex to Morehouse. National trends point towards sustained minor population losses in much of Rural America in the decades ahead, so to try and reverse these trends will take purposeful local actions to make Adirondack communities into places that are well stocked with appealing cultural and social amenities, are places with an adequate supply of affordable housing, have good access to health care, broadband, quality schools, viable employment, and are safe and welcoming to all people. There are lots places in Rural America using variations of this same formula in their recruitment efforts, but we have a landscape of unparalleled beauty with world class outdoor recreational opportunities.