For the Adirondack Park, the county level population data doesn’t tell us much because only Essex and Hamilton are completely within the Blue Line. Essex County is projected to have lost about 1,400 residents (-3.5%), while Hamilton County dropped by 368 residents (-7.3%). The 2017 projections provide county level data and don’t provide us with accurate town-level counts. The Adirondack population is somewhere around 130,000 residents who live within the Blue Line, a fraction of the 1.014 million who live in the 12 Adirondack counties. The Park is surrounded by counties that have small cities, like Saratoga Springs, Glens Falls, Queensbury, Plattsburgh, Malone, Potsdam, Canton, Lowville, Utica, Rome, Herkimer, Johnstown, and Gloversville, all of which dwarf the interior Adirondack Park population.

The map at the top of the page shows population gains and estimated county by county across New York. Of the 10 Downstate counties, only Suffolk County on Long Island experienced a slight loss; the total Downstate NY counties gained over 500,000 people. Across the 52 counties of Upstate NY losses are estimated at a total of over 65,000. Just 8 Upstate counties are projected to have gained population.

So, while many will jump out of their chairs about the drop of near 1,800 people in Essex and Hamilton counties and the drop of 16,000 across 11 Adirondack Park counties (not counting Saratoga County), some perspective is needed.

Lets start with some state perspective. Across New York’s 62 counties, 45 are estimated to have lost population from 2010 to 2017. If we group the five New York City counties (Bronx, Kings, New York, Queens and Richmond) with the two Long Island counties (Nassau, Suffolk) along with the three metro-New York counties of Westchester, Orange and Rockland, into a geography called “Downstate” we see that 9 of 10 of these counties gained population and saw a total increase of around 509,000 people. Only Suffolk County in eastern Long Island lost population, dropping 1,700 people, a tiny rate of 0.1%. These 10 counties have a total population of 13.2 million people.

Overall, New York State is estimated to be growing, netting over 440,000 people 2010-2017. The challenge for the state is that growth is happening Downstate, while Upstate continues its slow decline. There are two main factors that drive the slow, inexorable population loss across Upstate and the Adirondacks. First, we export college-age kids, who after graduating move in high numbers to metropolitan areas and do come not back to their Upstate communities. Second, old people die. The population of Upstate New York, and much of Rural America, boomed after World War II with the growth of the baby-boom generation, who in 2018, despite their best efforts, are dying off.

The baby-boom population is over represented across the Adirondacks and Upstate. At its peak, this generation was nearly 79 million across the U.S., but dropped five million by 2015 to 74 million. The baby-boomers are expected to dwindle to 16 million by last 2030s/early 2040s. Baby-boomers in New York top 2.7 million, with about 38,000 or so in the Adirondack Park, close to 30% of our total population. This high number is partly driven by the fact that the Adirondacks recruits retirees, while other areas in New York export them. While Downstate is likely to keep growing, pushed by immigration of young college graduates and immigrants from abroad, Upstate and Adirondack populations will likely see further population contraction of 5-10% by 2030. It’s likely that after 2030, Upstate and Adirondack populations could level off at a point near where they were in 1970, though the population will be an older one, unless there’s a new wave for people who discover the joys and wonders of life in Upstate New York and the Adirondacks. Climate change refugees from the south and southwest, perhaps?

It’s important to note that land use in 33 of the 44 Upstate New York counties that lost population over the past seven years was not regulated by the Adirondack Park Agency. Yet, despite being free of the oppressive yoke of the APA Act, these 33 Upstate counties still managed to fumble and bumble away their good fortunes and lose population, many at greater levels than Adirondack counties.

Lets add some national perspective. The 2017 Census estimates provide data on 3,107 U.S. counties. Of these, 1,441 gained population, while 1,666 lost population. Clearly, Adirondack counties are not alone in experiencing trends of population loss, they join with 53% of the country. More than 160 counties across the U.S. experienced even greater estimated population losses than Hamilton County’s -7.3% rate.

The U.S. population grew by over 100 million people from 1970 to 2010, but only 4 million of these folks ended up in Rural America. Across the U.S. today, just 2% of the population occupies 42% of the continental American landscape, which includes the Adirondacks. Just 7% of the U.S. population occupies 54% of the U.S. Many other studies have shown that jobs and wealth have also shifted from Rural America to Metropolitan America along with population. The Adirondack Park faces formidable national and international trends where powerful forces are pushing massive urbanization. Want to visit a city of 100 million people? It won’t be long. 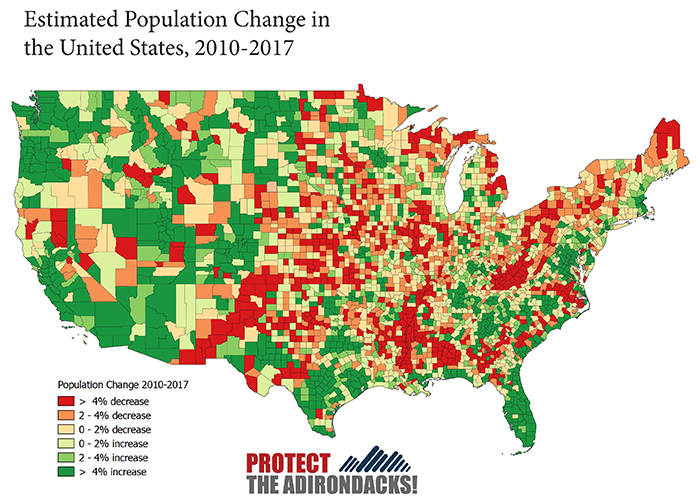 When it comes to building a sustained and viable Adirondack Park population, Adirondack communities face a lot of questions. What’s the optimum population? What are the issues for communities that are growing versus those that are shrinking? What has driven population loss? What has driven population gain? What are the most successful tactics for recruiting new residents? It seems that now is the time for Adirondack Park communities to develop recruitment strategies that deal with an array of pressing issues from employment to housing to health care to education to social amenities.

One reality is that in 2018 there is a limited population that truly wants to live in a place like the Adirondack Park. Seriously, five months of winter, two months of mud, four months of bugs, two months of summer, two months of fall, got to drive an hour to see your friends or do just about anything, freezing August days, low population densities, conservative politics; this place is not everybody’s cup of tea. But for those who grew up here and want to make a life here, those who visited and always dreamed of moving here, and for that unique group of intrepid souls who want to move and make a life here, it seems to me that the Adirondacks needs some kind of organized forum that can help match people to jobs, careers, and communities, and provide a pathway of sorts to help people create viable lives in the Adirondacks.

The only way, save for some kind of 1970s back-to-the-land movement, for the Adirondacks to stem the slow population decline that is bedeviling Upstate New York and Rural America, is to develop a serious recruitment program.

The Adirondack Daily Enterprise has been running a series on what it’s calling the “Labor Gap,” which reports on the relatively new phenomenon where local employers are having a hard time finding employees. They have jobs, but no workers. These gaps have been plugged in various ways across the Adirondack Park, such as by higher numbers of foreign labor, or have led to painful decisions by local manufacturers to automate instead of hiring local workers, or have led others to rely on employees who telecommute to Adirondack jobs but live far outside the Adirondacks, among other things.

The 2010-2017 US Census estimates confirm the impacts of national population and urbanization trends on the Adirondacks. These trends will be tough for Adirondack communities to buck. Like most of Upstate New York and most of Rural America, we’re facing slow, steady population decline. The good news is that in 2018, it seems to me, that there is a leadership pool across the Adirondacks that could be mobilized to tackle the population challenge in a serious data-driven way rather than simply pointing fingers of blame.