Protect the Adirondacks supports a proposed Article 14 Constitutional Amendment for the Mount Van Hoevenberg Olympic Sports Complex outside Lake Placid. At the Mt. Van Hoevenberg complex, the Olympic Regional Development Authority (ORDA) currently manages around 1,220 acres of Forest Preserve classified as Intensive Use by the Adirondack Park Agency (APA). Abutting these lands is 319 acres of land owned by the Town of North Elba. Together this complex houses the Olympic bobsled and luge track, cross-country skiing and biathlon trails, and associated facilities, with most of the intensive buildings and facilities located on the town lands.

Under this amendment (A.9416 Jones/S.7222 Kaminsky), the state would be authorized to utilize 323 acres of 1,039 acres in the Mount Van Hoevenberg complex for a variety of winter sports activities and facilities, including trails, buildings, water lines, and parking lots, among other structures or facilities. The amendment would exempt the state from tree-cutting standards applicable to the Forest Preserve. Through an Article 14 amendment, the Mount Van Hoevenberg complex would be governed by the distinct terms just as the downhill ski areas at Whiteface Mountain, Gore Mountain, and Belleayre Mountain have been regulated by amendments.

Around 181 acres of lands currently classified as Intensive Use would also be reclassified as Wilderness and added to the High Peaks Wilderness Area. The amendment would compensate the Forest Preserve by purchasing at least 2,500 acres of new lands to add to the Preserve. 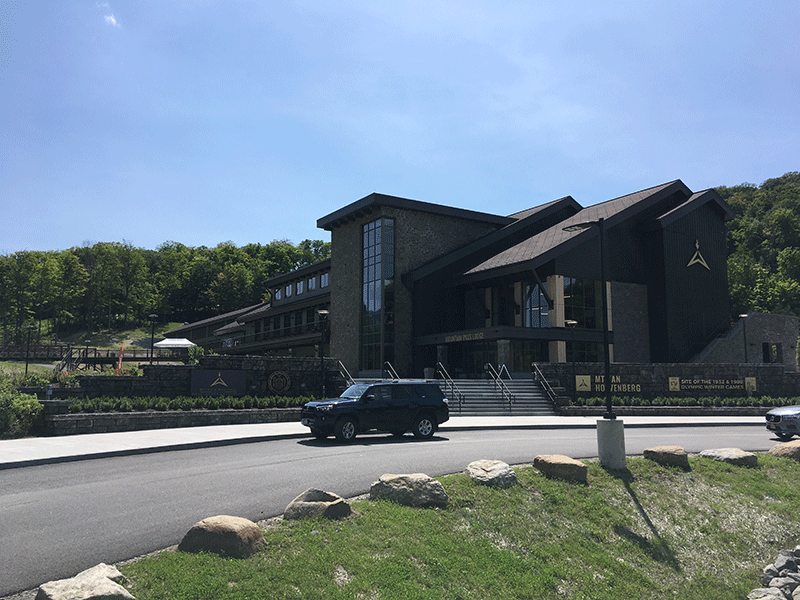 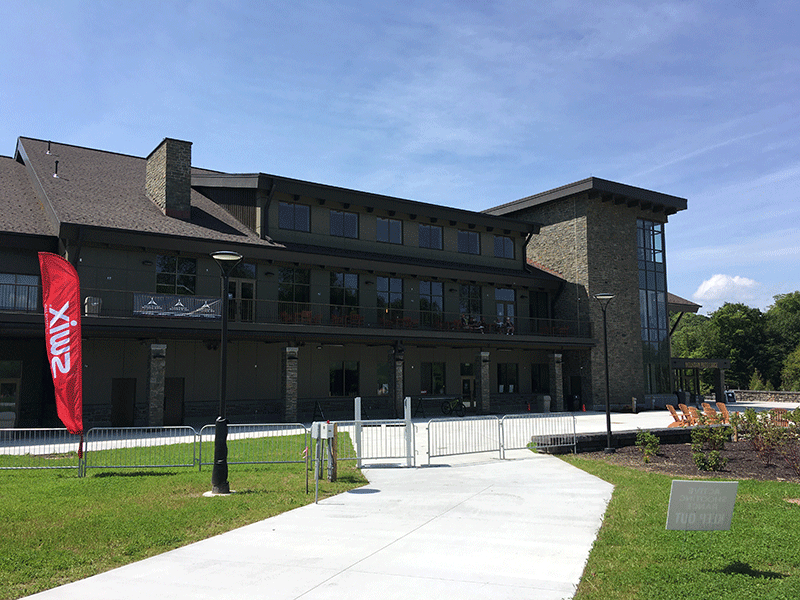 These pictures show the side and front of the newly constructed visitors building at the Mount Van Hoevenberg Winter Sports Complex.

The “split” lands of the Mount Van Hoevenberg complex, between the town and the state, is partly the result of two famous Article 14, Section 1, legal decisions in 1930, one by the Appellate Division, Third Department, and the other by the New York Court of Appeals, that struck down plans by the State of New York to build a bobsled track on Forest Preserve lands at this location. This decision forced the state to build the bobsled track for the 1932 Winter Olympic Games on lands owned by the Town of North Elba.

Since then, the State of New York has placed much of the buildings and other facilities on town lands, but in the intervening eight decades the state has also undertaken a number of questionable actions on the Forest Preserve at the Mount Van Hoevenberg complex that clearly violate Article 14, Section 1. For instance, there are buildings that straddle the Town-State boundary. There are paved roads that are connected on Town-State lands. There are parking lots that straddle the Town-State boundary. There has been tree cutting on the Forest Preserve in excess of constitutional limits, as established in case law. Many of these violations pre-date the formation of ORDA in the mid-1980s, but others have occurred during ORDA’s stewardship.

This proposed legislation states: “First passage of a constitutional amendment to authorize the construction, operation, and maintenance of the Mount Van Hoevenberg Olympic Sports Complex on Forest Preserve land in the Town of North Elba, Essex County and add at least 2500 additional acres to the Forest Preserve.” This proposed amendment is accompanied by enabling legislation (A.9453/S.7221), which provides important details about the implementation of this legislation. We believe that “first passage” of a proposed Article 14 constitutional amendment should always include passage of accompanying enabling legislation that spells out many of the details of the proposal. Once first passage is secured, this must be followed by “second passage” in a new legislature and then a vote by the people.

Protect the Adirondacks has long stated our belief that state management of the Mt. Van Hoevenberg complex has at times violated the State Constitution. These are particularly glaring given that these violations exist within the literal and actual shadow of the first major Article 14 legal decision. We have raised these issues during Unit Management Plan (UMP) review and hearings, among other forums. Our concerns forced adjustments to ORDA’s plans at various points in the past, but other violations occurred, nevertheless. 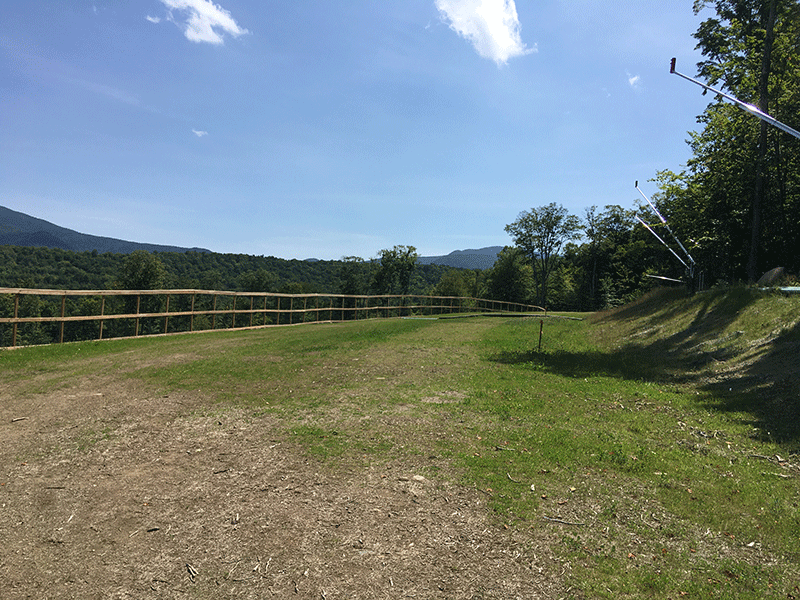 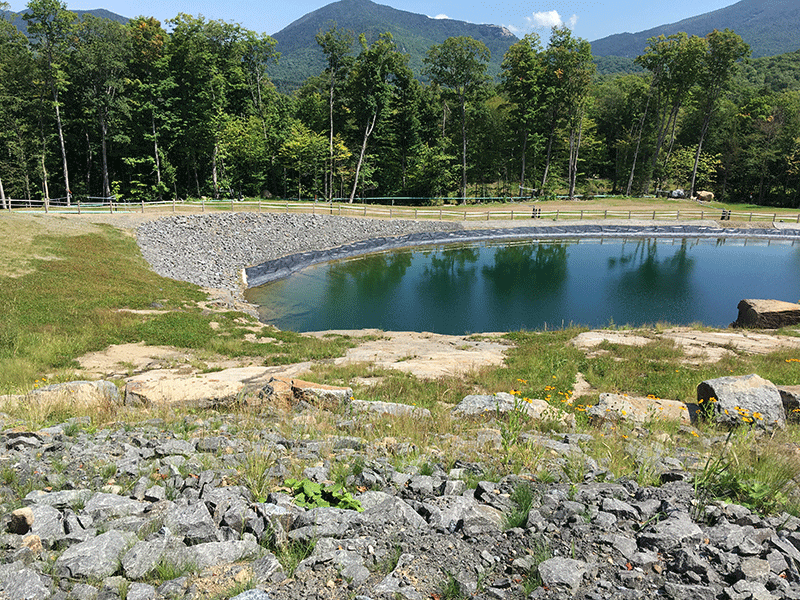 These pictures show a section of a new cross-country ski trail and newly constructed reservoir (on town lands).

Today, ORDA is implementing an unprecedented surge of construction funded by hundreds of millions of dollars in state money to renovate the entire Mount Van Hoevenberg complex. Much of this work is underway so that the facility can meet international winter sports competition requirements for major events, the first of which is the World University Games in 2023. We believe that a number of actions in this massive renovation and expansion violate Article 14, Section 1. Therefore, we believe that the best remedy is an amendment to Article 14, Section 1, even if it’s late in coming, despite the fact that it’s after-the-fact.

Here is the draft amendment language:

NOTWITHSTANDING THE FOREGOING PROVISIONS, THE CONSTRUCTION, OPERATION, AND MAINTENANCE TO INTERNATIONAL STANDARDS FOR NORDIC SKIING AND BIATHLON TRAILS THAT WILL ACCOMMODATE GLOBAL COMPETITIONS, TRAINING, AND EVENTS, TOTALING NOT MORE THAN THREE HUNDRED TWENTY-THREE ACRES OF TRAILS AND APPURTENANCES THERETO, IS AUTHORIZED ON ONE THOUSAND THIRTY-NINE ACRES OF FOREST PRESERVE LANDS AT THE MOUNT VAN HOEVENBERG OLYMPIC SPORTS COMPLEX IN THE TOWN OF NORTH ELBA IN ESSEX COUNTY, AND AS AN OFFSET THERETO THE STATE MUST ACQUIRE FOR INCORPORATION INTO THE FOREST PRESERVE AT LEAST TWO THOUSAND FIVE HUNDRED ACRES OF FOREST LAND FOR INCLUSION IN THE FOREST PRESERVE IN THE ADIRONDACK PARK ON CONDITION THAT THE LEGISLATURE SHALL DETERMINE THAT SUCH LANDS ARE EQUAL TO OR GREATER IN VALUE.

It’s important to note that in addition to the Mount Van Hoevenberg Winter Sports Complex, ORDA also manages three alpine downhill ski areas owned by the State of New York – Gore Mountain and Whiteface Mountain in the Adirondack Park and Belleayre Mountain in the Catskill Park. Each of these ski areas is built on Forest Preserve and is governed by an Article 14, Section 1 amendment that sets parameters while also enabling management activities and upgrades to keep these facilities consistent with changes in the sport of alpine downhill skiing. Whiteface Mountain was approved in 1941 and 1987. Gore Mountain and Belleayre Mountain were approved in 1947.

At all three of these ski areas, the state is allowed to build and operate facilities that would otherwise be prohibited on the Forest Preserve, subject to specific limits in the constitutional amendments. Since taking over the management of these facilities, ORDA has successfully operated them within the bounds set by these amendments. However, the nonconforming state facilities at Mt. Van Hoevenberg are not expressly authorized, nor are they subject to constitutional limits, like the other three facilities. This proposed amendment would help to right historical wrongs. 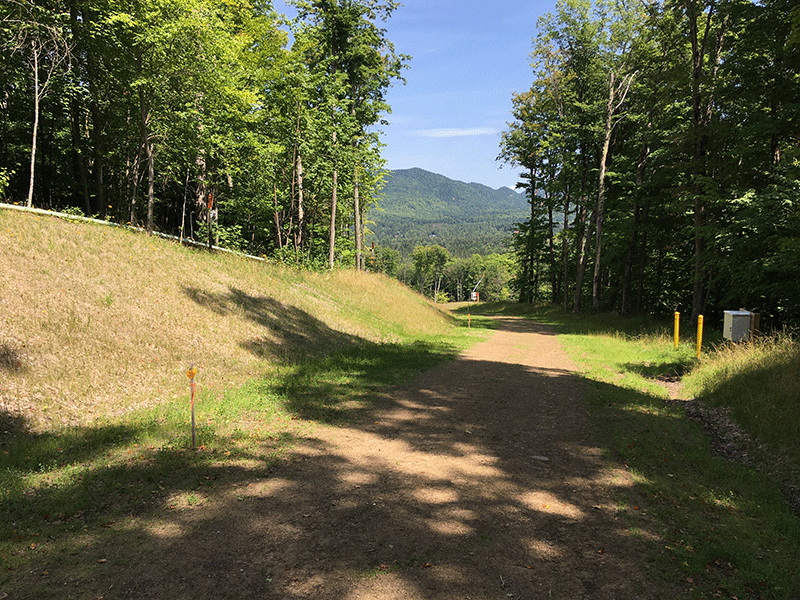 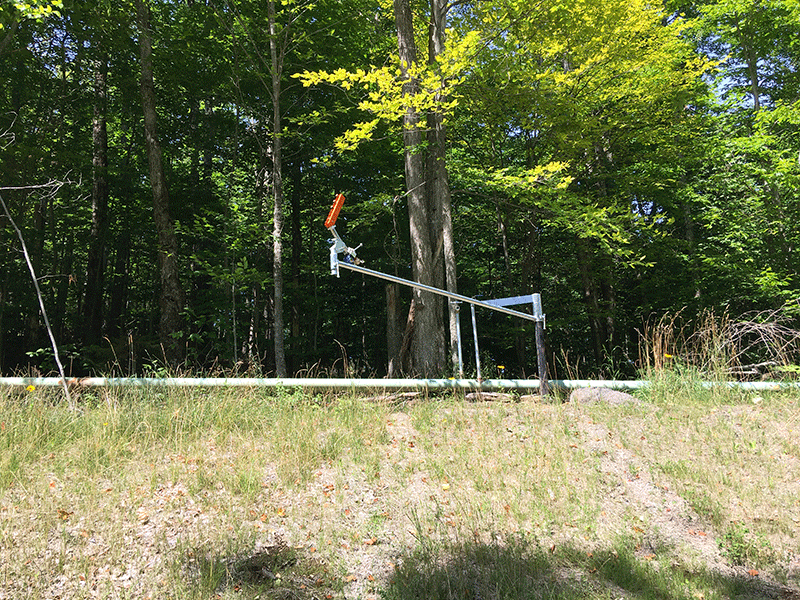 Protect the Adirondacks believes that now is the time for an amendment for the Mount Van Hoevenberg complex similar to those in effect for Whiteface, Gore, and Belleayre. Such an amendment would create clear lines for future administration while providing a measure of flexibility for future growth. The current expansion of the Mount Van Hoevenberg complex, and the vast amount of state spending there, demand that action be taken now to bring this facility into compliance with the Forever Wild clause. At this point, the only way to accomplish this is to pass an amendment.

If an amendment is not pursued, we’re left with two choices: 1) accept continued violations of the Forever Wild provision by the State of New York; 2) go to court and sue the state. Neither option is appealing. Acceptance of violations of our State Constitution by the State of New York is an intolerable situation for all New Yorkers and the people’s land – the Forest Preserve. Going to court is no fun either.

Given these realities, Protect the Adirondacks supports a constitutional amendment for the Mount Van Hoevenberg Olympic Sports Complex.