Longtime grassroots Adirondack Park environmental activist Joe Mahay died in early August at home with his family.  Joe and his wife Naomi Tannen had been living in Florence, Massachusetts, where for the past year and a half Joe had dealt with metastatic cancer and chemotherapy.

Joe was one of the founders of the Residents’ Committee to Protect the Adirondacks and twice served as its Chair, tactfully leading the organization through its formative years and a raucous debate over the future of the Adirondack Park in the 1990s and early 2000s.

Joe had a long career as an administrator at a non-profit agency working with people with developmental disabilities in Essex County and poured his volunteer time for many years into the protection of the Forest Preserve and Adirondack Park.

Joe died when he was 73. From about 2008 to 2013 he tweeted and blogged, mostly about his family and the Adirondack wilderness, but he grew up in a different world in rural areas outside of Saratoga Springs where he attended a one room school house through the 6th grade. He worked on his relatives’ family farms in the foothills of the Adirondacks where he developed his love of growing vegetables and flowers and interest in old tractors and raising farm animals. He actively hunted and fished in the forests of Saratoga County where he developed a strong bond with the outdoors and wild places. Joe received his BA in American History and MA in sociology from SUNY Albany and started his working life teaching sociology at St. Lawrence University. It was at St. Lawrence in 1970 where Joe decided to turn theory into practice and took a position deep in the Adirondacks at the Highland Community School, located on a 400 acre farm on Letsonville Road in Paradox, surrounded by the managed forestlands of International Paper Company and the wildlands of the Forest Preserve. 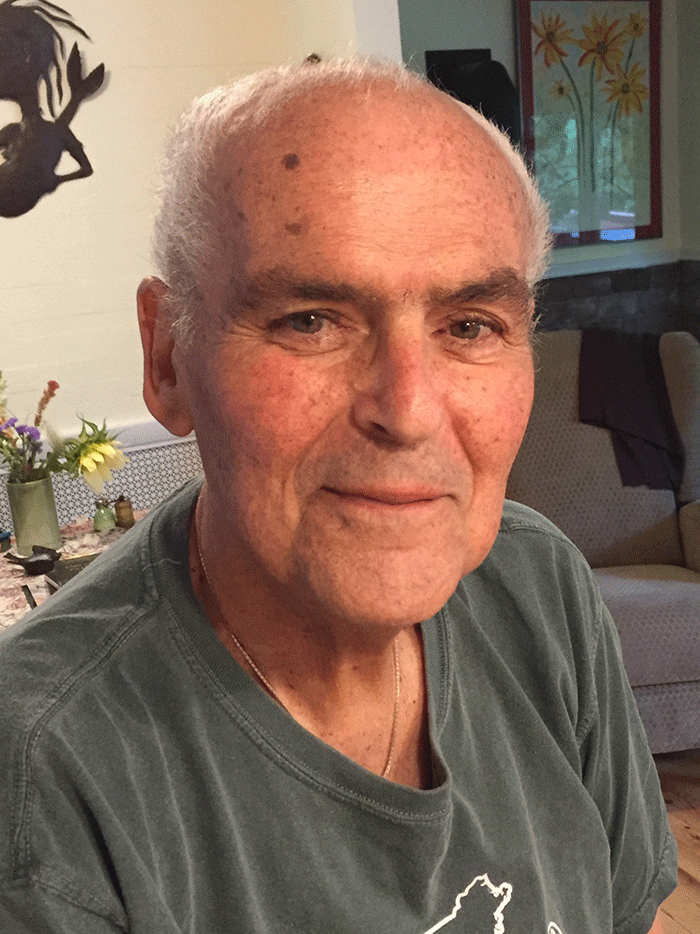 The Highland Community School was an innovative residential school and treatment center for teens with emotional and/or substance abuse problems, which started in Elizabethtown in 1964. It was founded by Naomi Tannen, who in 1974 became Joe’s partner for the next 44 years. Joe made lifelong friends among the staff and students at the Highland School, many of whom saw Joe as a mentor and their saving grace, a man with both good humor and good judgement. The art therapist at the school was a potter named Ben who went on to make ice cream in Vermont.

Joe started as an environmental education teacher, farm manager and house parent at the Highland School, where the faculty quickly came to rely upon his jack-of-all-trades skills with machine and building repairs, honed from years working on small farms. Joe rose to be the co-director by 1973. The school also brought Joe into deep contact with the wilderness and wild areas of the Hammond Pond Wild Forest, which bordered the school.

Joe’s enthusiasm for the Forest Preserve exploded in these years. At one point he had a group of students that camped out one night each week throughout the year. They went on long hikes, camping trips, and bushwhacks. He guided students in learning about fresh water biology, bird life, outdoor skills, and both the geological and socio-political history of the area.

In 1991, Joe was honored by Adirondack Life as its “Adirondacker of the year.” In an accompanying article by David Shaw, one of Joe’s former students at the Highland School, Shaw wrote “I was a student at Highland, and it was that time there which fostered a deep appreciation of the Adirondacks, and my friendship with Mahay. He was a mentor to me. He took me bushwhacking on hikes through rough stretches of wilderness I could never have imagined from my suburban upbringing. He showed me how to track big game and how to identify wildflowers. He introduced me to the labor and rewards of snowshoeing over waist-deep snow, and he pointed out the constellations backlit by the aurora borealis.”

Joe’s years at Highland School are artfully evoked in the memoir Pagan Times: An American Childhood written by his oldest daughter Micah Perks. The school closed in 1977, after which Joe and Naomi spent most of their years living in a log cabin on the site of the school, where many of the open fields rewilded. Joe worked for 25 years at the Essex County ARC in Port Henry, where he helped a large community of people with developmental disabilities.

Joe’s fondness for the Forest Preserve and the Adirondack way of life led him to join together with a dozen other folks in the tumultuous summer of 1990 to organize the Residents’ Committee to Protect the Adirondacks. The RCPA had a 19-year run, and many successes in helping to shape state policy in the Adirondacks with regards to land acquisition and Forest Preserve management, developing innovative programs for water quality monitoring and sustainable forestry certification, and helped pass a variety of legislation. The RCPA sought to bring out the voices of Park residents who supported environmental protections for the Adirondacks. Joe gracefully helped guide the group with his calm thoughtfulness and good cheer. In 2009, the RCPA merged with the Association for the Protection of the Adirondacks to form Protect the Adirondacks.

Joe enjoyed a wide spectrum of friends in the Adirondacks and at an early RCPA town hall meeting in the summer of 1991, he brought out his friend Robert “Bashful Bob” Snyder, a neighbor of Joe’s in Paradox. Bashful Bob charmed audiences with anecdotes of a hermit, the values of living a simple life in the woods, and by reciting his poetry. Bob and his wife Marie are evoked in Sue Halpern’s book Migrations to Solitude.

In the late 1980s, Joe charted a bushwhack from the west side of the Adirondacks, starting at the west boundary of the Independence River Wild Forest area, to the Hammond Pond Wild Forest and his home in Paradox. His course was drawn on a series of maps that covered a 20-foot swath of the walls in his log cabin. His route minimized road crossings to just a few and knitted together a journey made largely through different units of the Forest Preserve. Joe hiked the bushwhack in sections with different friends, including his youngest daughter Jenna on a thickly wooded and rainy stretch. He ended the trek after 85 miles, finding river crossings impassable due to heavy rains that summer and realizing that if he were injured when he was far from any paths or roads he might never be found. Joe remarked once that his life in the Adirondacks was hopelessly lopsided because no matter what he did or how much he worked to try and protect the Adirondack Park, this place had given to him far more than he could ever give to it.

In the spring of 1991, the RCPA published the first edition of Adirondack Voices, which was mailed to every household in the Park. In it, Joe published a piece called simply “The Importance of Wilderness.” It was a brief overview of wilderness and western civilization. Joe recounted that wilderness inspired any number of artists and thinkers. “Moses, the Prophets and Jesus went to the wilderness and returned with ideas that have since formed the underpinnings of western civilization,” Joe wrote, also noting that the “forever wild” ethos of the Forest Preserve helped shape the national 1964 Wilderness Act.

From these grand themes, he honed his message to his Adirondack neighbors: “Some have suggested that wilderness recreation is for the elite. Most of the hunters and anglers I have met in the backcountry have hardly seemed like an elitist group. These people would likely laugh pretty hard at this notion while sitting around a campfire at night far back in the woods. Those of us in the Adirondacks who are too poor or don’t desire to pay the fees to join a private club (and we are many) use the Forest Preserve for a low-cost vacation.” Joe also wrote about the importance of access to wild areas for disabled individuals.

In a 1993 edition of Adirondack Voices, Joe wrote “Adirondackers and Open Space: A Mutual Dependency.” It was a piece about the importance of open space to the psyche of Adirondack residents, with an argument for tax relief for landowners who wanted to keep their lands in open space and help preserve the Adirondack landscape. Joe asked whether the Adirondacks would be a “a place going to remain as a place where a satisfying way of life can be lived by the people who reside here, or is it destined to become a playground for speculators?”

Joe’s deep roots in the North Country and his long career in human services in Essex County gave him a window into the Adirondacks. In the Adirondack Life piece about him, Joe told David Shaw “It’s even hard for me sometimes to realize that my backyard [in the Adirondacks] is a nationally significant place. To me it’s my yard, it’s where my dog runs, where my kids have played, where I get stuck in my truck. On another level, however, all of the Adirondacks is an area which has exceptional biological diversity and unique vistas, which must be preserved for future generations of people residing in and out of the Park.”

Joe’s leadership of the RCPA was at a time of great conflict in the Adirondacks. In many ways, Essex County and the Champlain Valley were the locations of flashpoints in those years. The night that the writer, zoologist, and longtime Adirondack Park Agency board member Anne LaBastille’s barn on her Champlain Valley farm was burned down by an arsonist, a pile of gas soaked rags was lit on fire at the end of Joe’s driveway in Paradox.

Later in life, Joe talked about his fondness for hunting alone on the lands of the old farm and the surrounding Forest Preserve. He read a lot about the art of still hunting. The sketch above was done by Gerald Marcus, a friend of Joe’s, and shows him setting off for the day on one of those hunts.

Joe was a spiritual man and was a great reader, who read widely in a number of subjects, delving deeply into issues that took his interest. In 1993, he converted to Judaism. For a number of years from his cabin in Paradox he and Naomi drove up and down the Northway as they were active members of Temple Sinai in Saratoga Springs with Rabbis Jonathan Rubenstein and Linda Motzkin. He and Naomi spent a year in Jerusalem in 1996-97, which deepened his faith. In Florence, Mass. they were deeply involved in the community of Congregation B’nai Israel where he enjoyed a study group of the Talmud and other Jewish texts.

As he was dying in the summer of 2019, he never complained and kept up his good humor. A few weeks before his death he had a reprieve from poor health and enjoyed gardening for a stretch of several weeks in the early summer, remarking at one point that he would not live to eat the potatoes he’d planted. Naomi probed him about what kind of memorial service he would like. Joe said it didn’t matter to him because he wasn’t going to be there. He said not to sing his praises because he was a flawed man who battled alcoholism, cigarette smoking, and other demons. In his last years he found great solace with his local AA group.