New developments on the fates of defunct rail lines in the central Adirondacks; PROTECT calls for abandonment of these railroads

Protect the Adirondacks continues to support the adverse abandonment application with the federal Surface Transportation Board (STB), filed by the NYS Attorney General’s Office on behalf of the NYS Department of Environmental Conservation (DEC), regarding the authority of the Saratoga and North Creek Railroad (SNCR) to operate the 30-mile Sanford Lake Rail Line in the central Adirondack Park in northern New York. The rail line runs from the hamlet of North Creek in the Town of Johnsburg, Warren County, 30 miles to the Tahawus Mine in the Town of Newcomb, Essex County. This rail line connects in North Creek to the 55-mile Saratoga to North Creek Railroad. 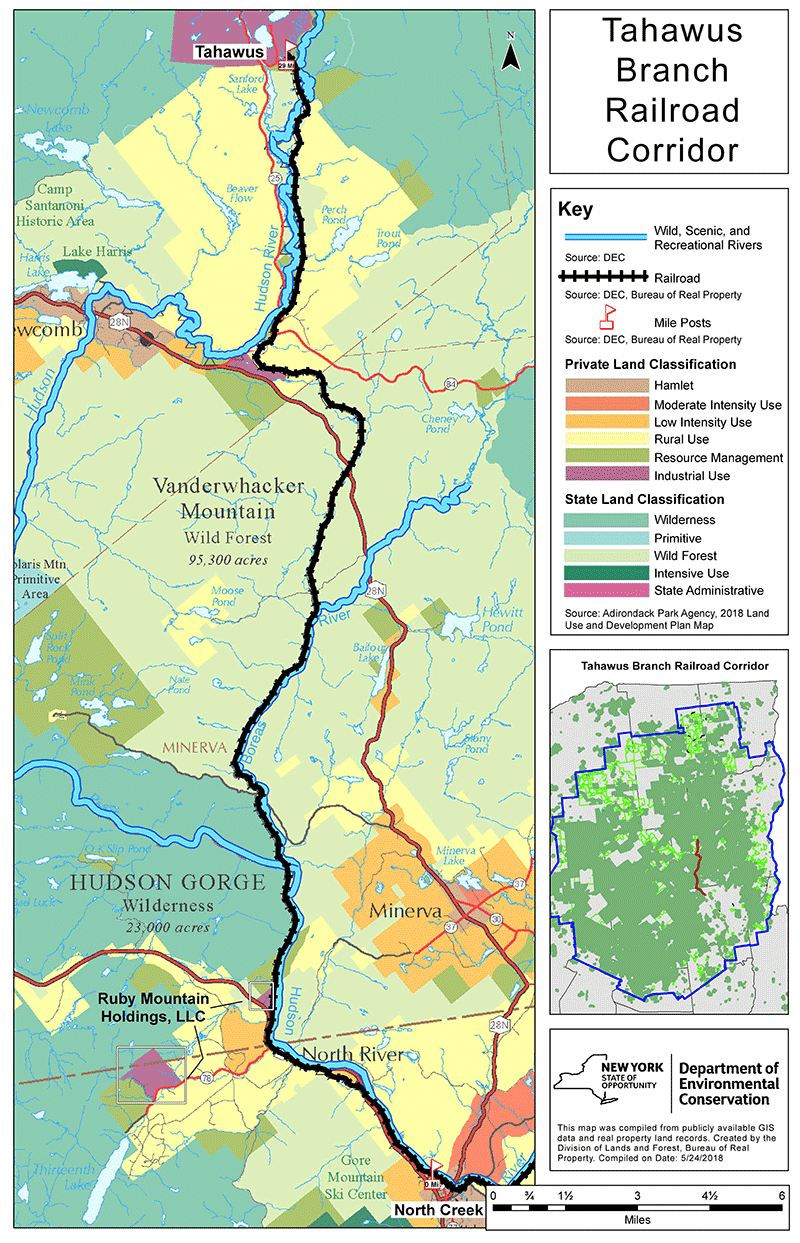 The past few days has seen a lot of paper shuffling stemming from Iowa Pacific Holdings bankruptcy proceedings among Adirondack local governments who hold different positions on the future of these rail lines. Earlier this year, William Brandt, the court-appointed Trustee administering the bankruptcy proceedings of Iowa Pacific Holdings, which owns of the defunct Sanford Lake Rail Line, notified the STB of his desire to try and sell the Sanford Lake Rail Line. Brandt sought a stay on the STB’s consideration of a request by the State of New York for formal abandonment of the Sanford Lake Rail Line, the first step to terminate the rail line. Brandt is obligated to try and recover any money he can during bankruptcy even though there is no viable buyer for the rail line. Click here for the Brandt letter.

In response to the Brandt letter, the Essex County Board of Supervisors took action to show their for the Sanford Lake Rail Line. They organized sent out a package of materials to federal representatives and the STB urging that no action be taken on the abandonment. Essex County is working under the belief that some day, some how, there will be a market for the mountains of rock and tailings from the Tahawus Mine and that the most economical way to transport this material is rail service, which requires keeping the Sanford Lake Rail Line in operation. In short, Essex County is working to keep all the pieces together. The Essex County Board of Supervisors wrote:

The SNCR railroad (the Tahawus line as we know it) is an asset to Essex County not a burden. It possesses sound commercial freight rail prospects and now with the economic consequences the coronavirus has brought to us, it remains invaluable. We urge the Surface Transportation Board to examine the complete record and consider supporting our continued efforts to reactivate the Tahawus Rail line.

The letter by Essex County included a glossy public relations “report” about the Sanford Lake Rail Line “Environmental and Economic Restoration of an Adirondack Mining Village.” This a flimsy document includes many unsubstantiated claims. On one page, this document quotes Protect the Adirondacks:

“It doesn’t seem at this point that the mine itself is [anything] more than an eyesore.”

“Eventually we’d like to see the mine cleaned up, restored to its natural topography as much as possible, and then become part of the Forest Preserve. This process could play out over decades,” Peter Bauer – Executive Director of Protect the Adirondacks

With a viable rail operator Peter Bauer’s vision will be achieved decades sooner and provide environmental and economic benefits to Essex County and parts of New York Sate. (typo is included in the document)

Protect the Adirondacks opposes the position of the Essex County Board of Supervisors. We opposed the application for common carrier status for the Sanford Lake Rail Line in 2011 and believe that since then the line has been an unqualified failure. Over the last twenty years, numerous private and public parties, including Iowa Pacific Holdings, Essex County, Warren County and the Town of Corinth, have made significant, repeated attempts to find a viable use of the rail corridor for rail traffic, to no avail. The now-deteriorated physical state of the rail line would require an enormous amount of investment just to make the line minimally usable for freight. The historic purpose of this rail line was to service a mine that has been defunct for more than three decades. PROTECT believes it is time to abandon this rail line so that the corridor can be returned to the landowners, including the State of New York and the public Forest Preserve. 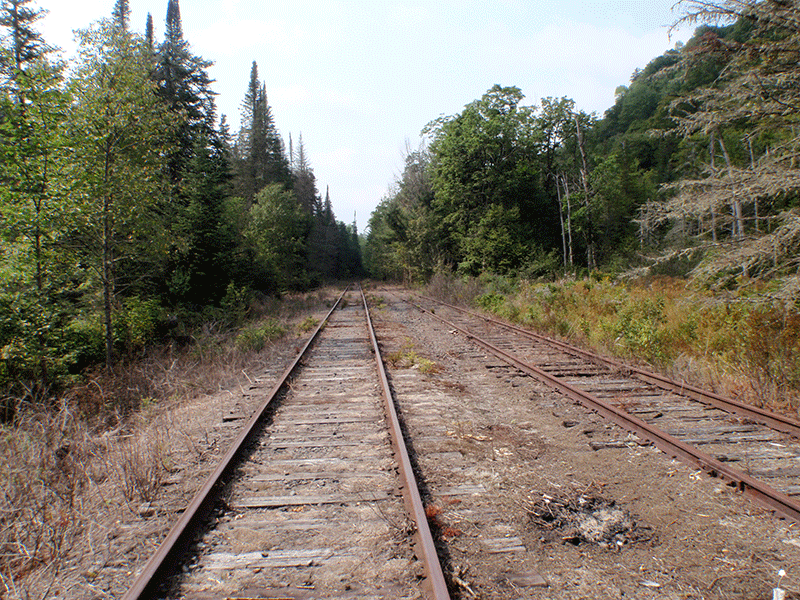 Another section of the Sanford Lake Rail Line with a long stretch of siding track along the Boreas River and running through the Vanderwhacker Mountain Wild Forest Area of the public Forest Preserve. The federal government used eminent domain to condemn an easement to build the railroad in 1942. This action was opposed by the State of New York.

The Warren County Board of Supervisors wishes to go on the record regarding comments made in correspondence dated April 17, 2020, and entered into the Public Record on the same date by William A. Brandt, Jr., the Chapter 11 Trustee for the bankruptcy estate of the San Luis & Rio Grande Railroad, Inc. (“SLRG”), the parent of Saratoga and North Creek Railway, LLC.

In his letter, in which he argues for the current adverse abandonment proceeding (Docket No. AB 1261) to be placed in abeyance until the end of the year, Mr. Brandt states the following:

“The Trustee is opposed to the application to abandon the SNCR railway. He filed the SNCR bankruptcy petition in order to explore a potential sale of SNCR’s assets as an operating railroad. The Trustee has been and is currently having negotiations and discussions with Essex County, Warren County, the Town of Corinth, the Town of Newcomb, the Surface Transportation Board, potential bidders in such a sale, and others as to whether such a sale is possible and the parameters of such a sale process”

Warren County is in no way, shape or form currently negotiating with these parties regarding a sale of our railroad assets. As such, Mr. Brandt’s statement constitutes a false representation to the Surface Transportation Board. We respectfully ask Mr. Brandt to withdraw his mischaracterization of Warren County’s position. 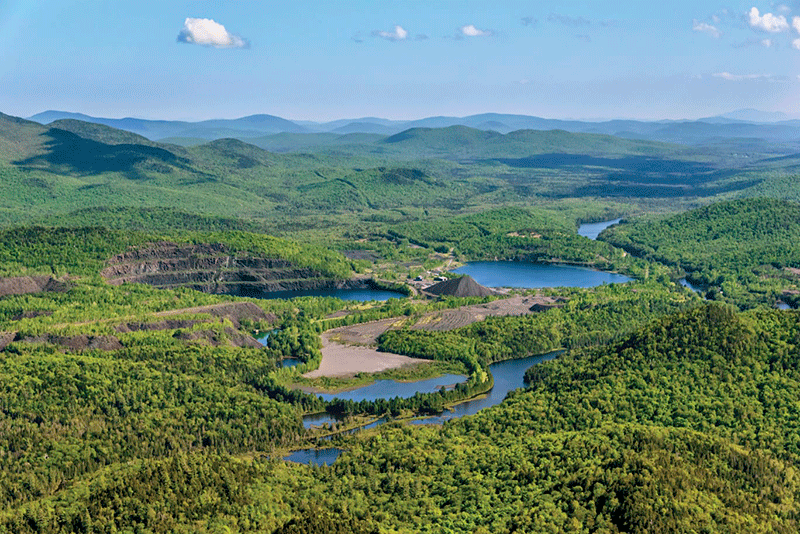 An aerial of the current state of the Tahawus Mine in Newcomb. Photo by carl Heilman for the Adirondack Explorer.

DEC believes the Line should be abandoned because it currently carries no freight and is unlikely to carry freight in the future, and also because the Line – the right-of-way for which was taken by a federal exercise of eminent domain in the 1940s – cuts through and adversely affects the constitutionally-protected forest lands in New York’s Adirondack Park.

Protect the Adirondacks agrees with the NYS Attorney General that the line should be abandoned. On July 23, 2018, the NYS DEC stated in an environmental and historic report submitted to the STB its continued firm support for its request for abandonment.

Under the circumstances presented here, the public convenience and necessity permit abandonment because there is no present or future need for freight service over the Line. The public convenience and necessity require abandonment because the little-used Line—situated wholly within the six-million-acre Adirondack Park— cuts through the heart of New York’s constitutionally-protected Forest Preserve, frustrating the State’s constitutional obligation to preserve the forest in its natural state for the benefit and enjoyment of all New Yorkers.

As part of the report submitted by the NYS DEC, the NYS Office of Parks, Recreation, and Historic Preservation, which is the state’s SHPO, submitted a letter about the lack of historic significance of the Tahawus Railway. The Office wrote:

Based on this review, the Division concurs with recommendations found in the Draft Environmental and Historic Report (2018) prepared for the adverse abandonment of the Saratoga and North Creek Railroad in Johnsburg, Warren County. We agree that the industrial rail spur (active 1941-1989) that once serviced the former Tahawus Mine/NL Industries complex (demolished 2006) does not meet the criteria for inclusion in the New York State or National Registers of Historic Places.

The State of New York provided additional information to the STB in October 2019:

This office represents the New York State Department of Environmental Conservation in the above-captioned proceeding. On September 30, 2019, the Department requested that the Board issue a certificate of interim trail use for the subject line of railroad. I have discussed the Department’s trail use request with David Michaud, counsel for Saratoga and North Creek Railway (SNCR), and we write jointly to inform the Board that SNCR is willing to negotiate an interim trail use agreement with the Department.

Now is the time for action by the STB. Iowa Pacific Holdings is at the end of its line and is in the throes of bankruptcy. There are no buyers anywhere stepping up to buy the Sanford Lake Rail Line. There are no railroad companies stepping up to buy or lease the Saratoga to North Creek Railroad. Protect the Adirondacks has been out front in calling for conversion of the Saratoga to North Creek Railroad to a multi-use public recreation trail. We think that the Sanford Lake Rail Line should be abandoned and returned to the private landowners and the State of New York. More than two-thirds of this rail line runs through the Forest Preserve. 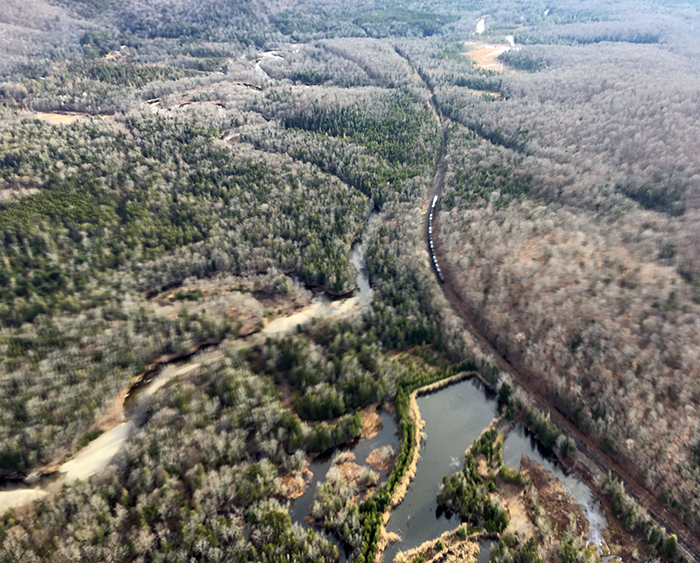 Used oil tanker rail cars stored at the edge of the Tahawus Mine in Newcomb in 2017.

Abandonment proceedings followed a tw0-year public debate over using the Sanford Lake Rail Line for storage of out-of-service oil tanker rail cars by Iowa Pacific. Governor Cuomo intervened to end this effort to all oil tankers were removed from the Sanford Lake line. Once rail cars were removed, the state began actions seeking formal abandonment in an effort to make sure that subsequent owners did not attempt the same thing. Protect the Adirondack supported these actions.

Protect the Adirondacks is now supporting conversion of the 55-mile Saratoga to North Creek Railroad to a public multi-use recreational trail. Click here to read about this effort.