Yes, build the Hudson River Bike Trail from North Creek to Saratoga Springs. Build it, and they will come. They did not come for the ill-fated commuter trains, snow train, tourist trains, or rail service that was going to haul millions of tons of aggregate from the Tahawus Mine in Newcomb. A groundswell of support is emerging for the transition of the dormant 55-mile-long Saratoga and North Creek Railway to the new Hudson River Bike Trail.

A new public trail from Saratoga Springs to North Creek would connect dozens of small communities such as Corinth, Lake Luzerne, Hadley, Stony Creek, Thurman, Athol, The Glen, Warrensburg, and Riparius, among other hamlets and businesses along the rail line. Such a trail would be very popular and heavily used. As we’ve seen with the Warren County Bike Trail between Lake George and Glens Falls, businesses would gravitate to the trail.

From bases in Saratoga Springs or North Creek, bicyclists, runners and walkers, among other users, would enjoy a stunning trip with long unbroken sections at the north end. In the summer there are more than a dozen places to swim. In winter months, the trail would be available for cross-country skiing, snowmobiling and fat bike riding on snow.

Rural America is inextricably connected to the global economy, though powerless over it. Rural America is littered with discarded industrial facilities. Decisions on papermills, mines, grocery stores and pharmacies are not made locally, but are made from afar.

Americans today are less likely to move than ever before. Employment is no longer the driving force that sees millions of people move great distances. When people do move quality of life is the driving force. Rural areas that are bucking national trends of stagnation and decline are those that have invested in, built, and facilitated a broad range of social amenities, including restaurants, art centers, coffee shops, parks, and non-profits. Scenic beauty is a vital amenity. Ample public outdoor recreation is another. 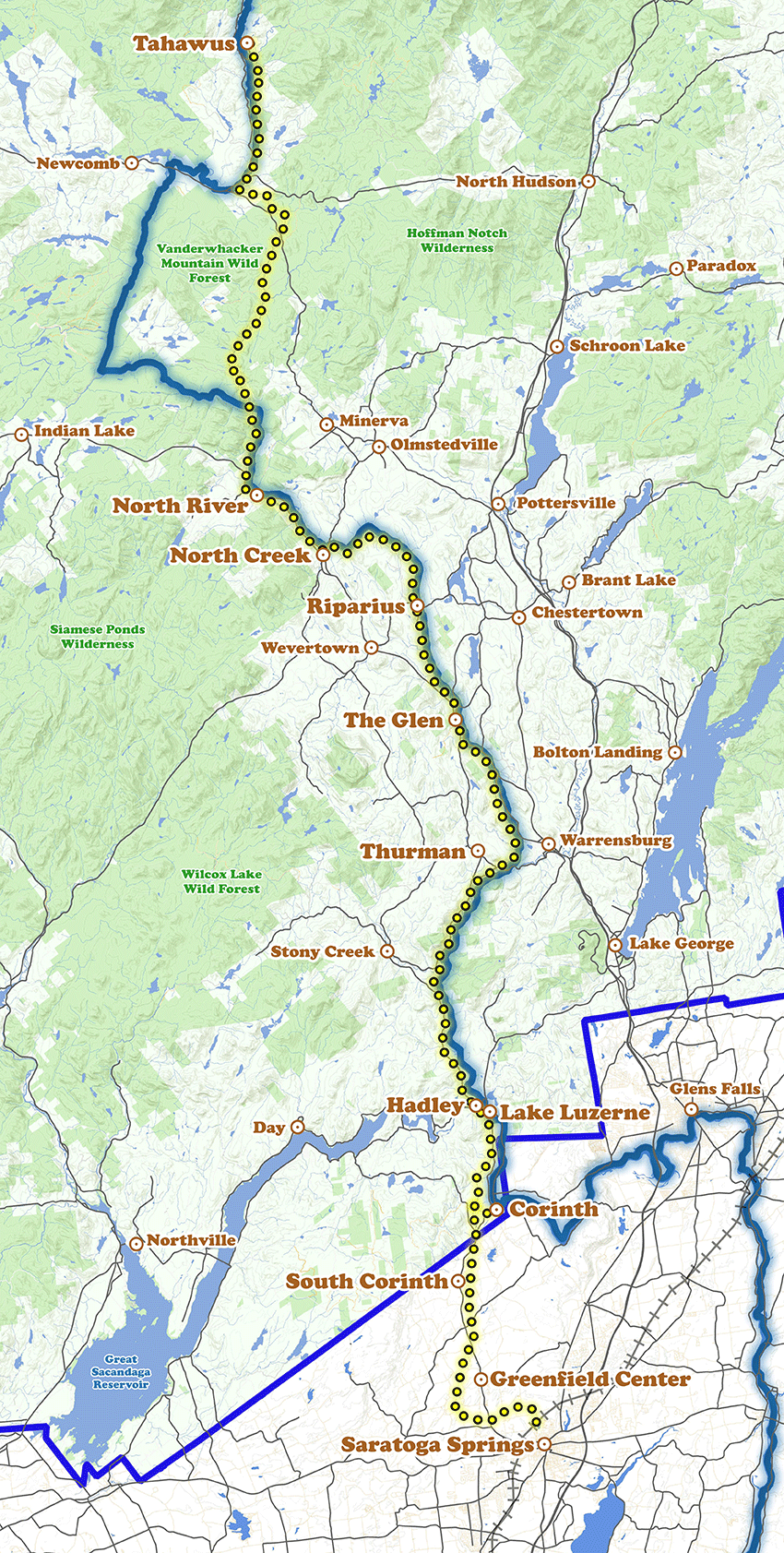 This maps shows the Hudson River Bike Trail, from not only the 55 miles from Saratoga Springs to North Creek. This match also shows the 29-mile Sanford Lake Railway from North Creek to the Tahawus Mine in Newcomb, which is clouded in legal issues, and has a different legal standing than the North Creek to Saratoga Railway.

The future for Adirondack communities lies in building social amenities that are connected to our abundant and accessible natural resources. There is no new technology or app that will render our forests, lakes, and mountains obsolete. The Forest Preserve cannot be picked up and moved to China. The Forest Preserve can’t be closed and shuttered. The public amenities throughout our communities and public lands are the economic cornerstones for our region.

Protect the Adirondacks is working with local government leaders, businesses, and volunteers to build support for a feasibility study of the conversion of the 55-mile-long Saratoga and North Creek Railway. We believe that a vigorous public assessment process based on extensive public input should be organized to explore this worthy proposal.

Construction is likely to start on the conversion of the railroad from Lake Placid to Saranac Lake to a public multi-use recreation trail next summer. There will be a lot to learn from that experience. Now is the time for Warren County leaders be pro-active and start examining the possibilities of conversion of its rail corridor. The Hudson River Bike Trail is an idea whose time has come.

Click here to read a letter to Governor Cuomo urging him to include funding in his budget for a feasibility study on the conversion of the Saratoga to North Creek Railway into a public multi-use trail.