A very strange thing happened this fall in the High Peaks Wilderness Area. The Department of Environmental Conservation (DEC) worked for weeks in 2021 with heavy machinery to rebuild an old logging road in the Dudley Brook area of the MacIntyre East section of the High Peaks Wilderness. This is the same area where the DEC had worked for months in 2019 and 2020 to tear apart old logging roads. However, the DEC says they’re not rebuilding the road; they say they’re simply correcting a massive mistake that somehow its leaders in Albany had failed to notice for the last two years.

This is one of the strangest things I’ve seen in Forest Preserve management at the DEC in the last two decades.

In 2019, DEC approved a work plan to do something new and different. The DEC set out in 2019 and 2020 to expedite ecological restoration and reclaim a series of old logging roads in newly purchased and newly classified lands in the MacIntyre East section of the High Peaks Wilderness. These lands are on the south side of the Opalescent River, include the southwestern flanks of Allen Mountain, and are bordered by conservation easement lands and a Primitive Corridor logging road. Since DEC work plans are not published, and since this is a trailless section of the High Peaks Wilderness where public access is difficult, involving a deep ford of the Opalescent River, we did not learn about this work right away. We had heard about similar road reclamation work in the Boreas Ponds area, but public access to that area has been limited and restricted in recent months. 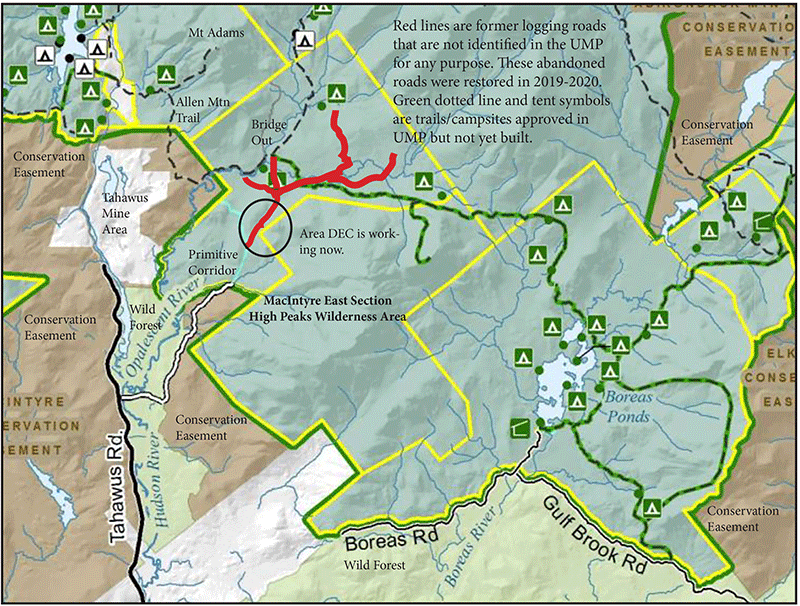 There are many old logging roads in Wilderness Areas, such as the Burn Road in the William C. Whitney Area, among many others, that see slow change over the decades as the forest steadily, but incrementally, eats away at them and reclaims these roadways. Many of these old roads retain old culverts and human geometric forms from benchcuts, banking, grading, and borrow pits, among other road construction features, for decades. In the MacIntyre East and Boreas Ponds areas, DEC organized work crews in 2019 and 2020 to tear apart these road corridors, and build a series of pits and mounds that mimic the natural forest, with the objective of changing the long linear geometry of these road corridors and expediting forest reclamation. (Click here for pictures of abandoned roadways where pits and mounds were built to restore the road corridor.) This work covered nearly 20 miles total of abandoned roads. 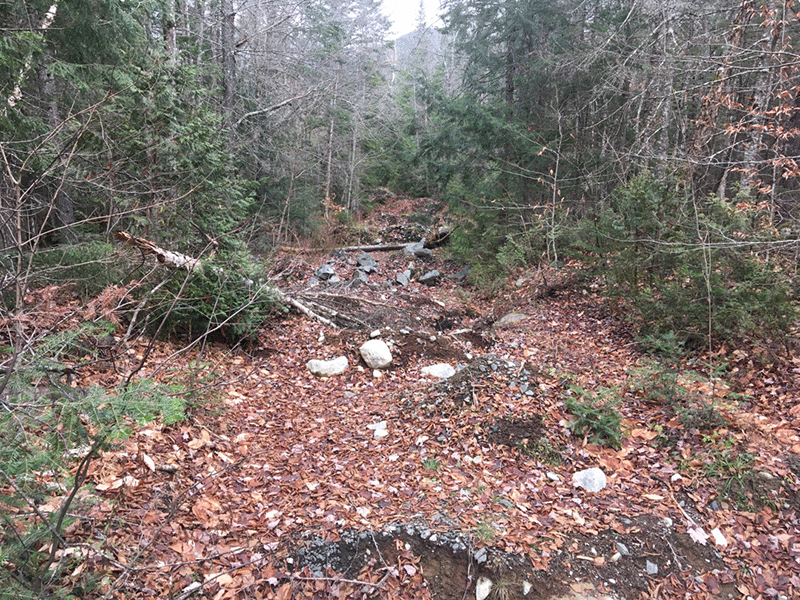 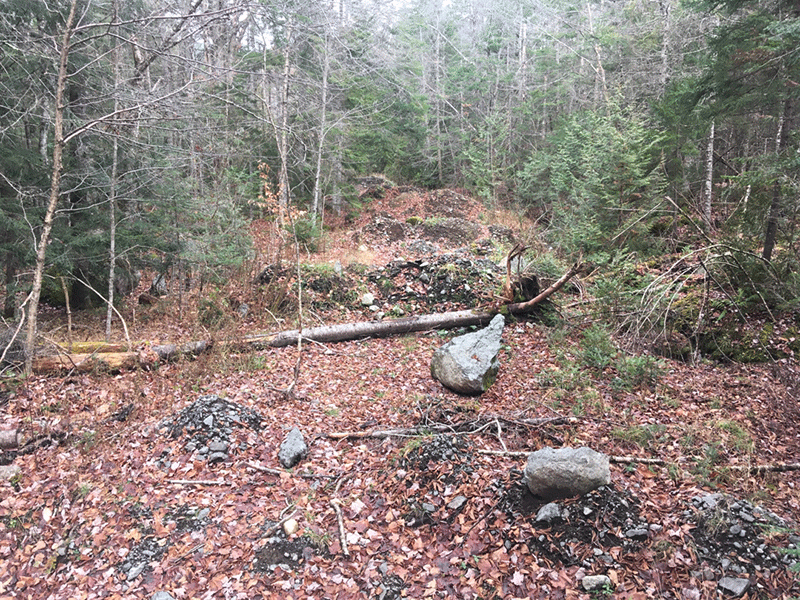 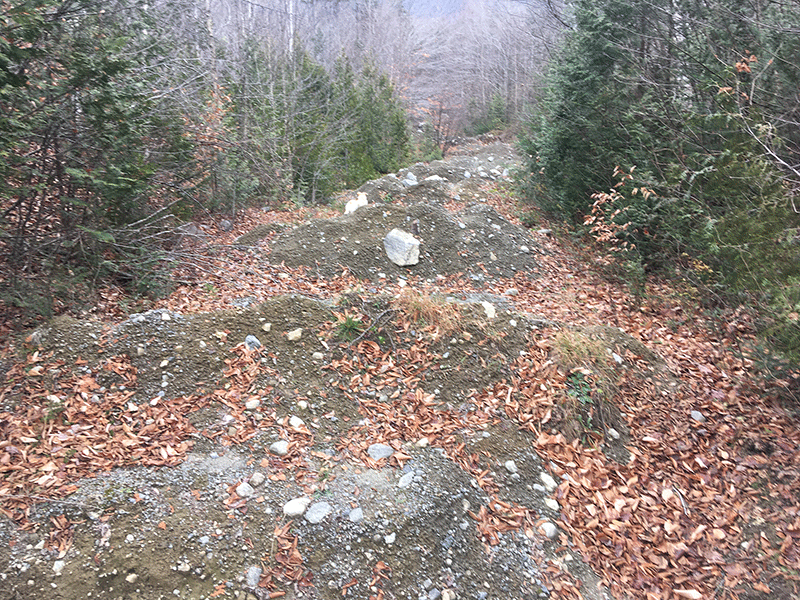 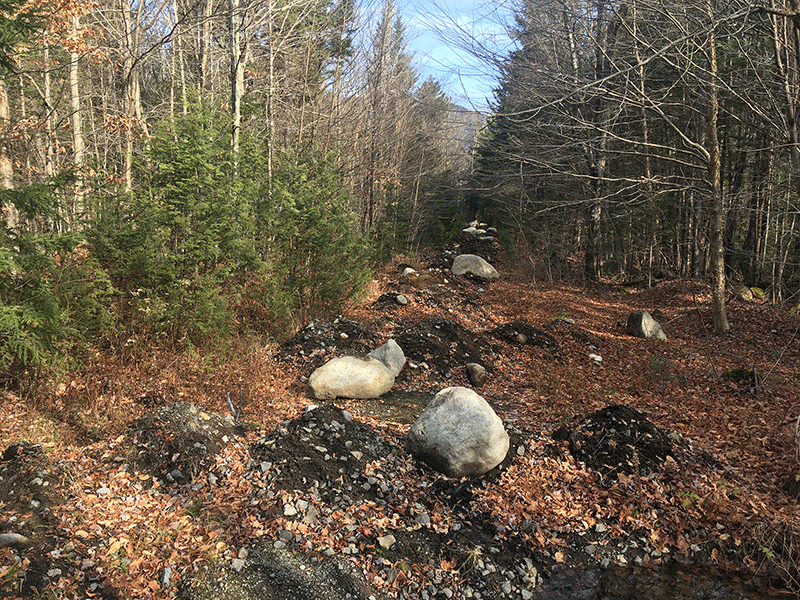 These pictures show road reclamation work using pits and mounds designed to expedite ecological restoration. This work was done by the DEC in 2019-2020.

The DEC reversed course suddenly, and without any public notice, at some point in 2021, DEC leaders in Albany did an about-face. After field visits, DEC’s Albany team organized a new effort to go back in to the old logging roads and tear out the mounds and fill in the pits. This effort had the effect of reconstituting a roadway. DEC leaders say that rebuilding a roadway was not their aim. Their objective, they contend, was to correct mistakes made in 2019 and 2020 that had escaped their notice, to protect water quality and public safety, and improve forest regeneration.

Protect the Adirondacks saw the restoration work on the abandoned logging roads around Dudley Brook, and similar work that was undertaken on the Boreas Ponds area, as an ambitious and positive management action by the DEC. We not only see the DEC’s decision to reverse course and reconstitute these roads as illegal, but also as fundamentally poor Wilderness policy and management. We had looked forward to monitoring the restoration of these abandoned roads into healthy and robust forests in the years and decades ahead. We were very interested in contrasting the new forest in these areas with other abandoned roads in Wilderness areas left to benign neglect. 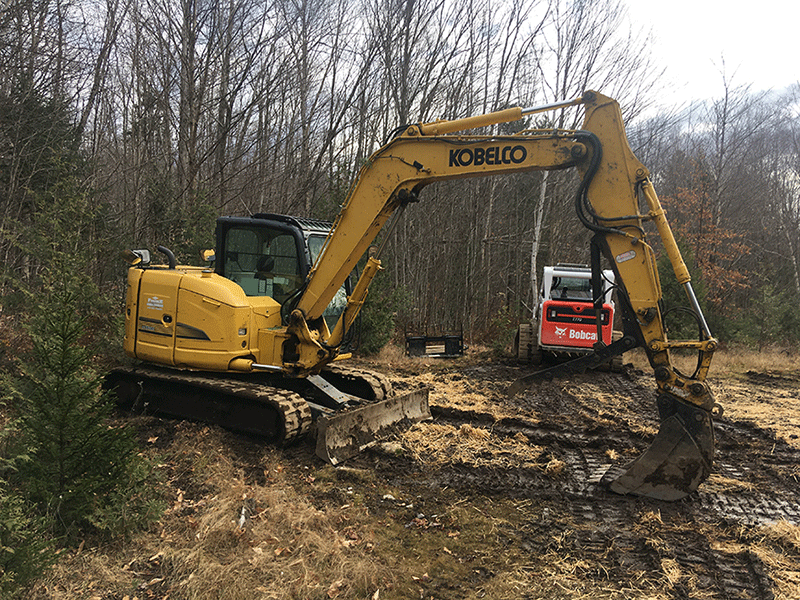 This picture shows the heavy machinery used by the DEC to remove pits and mounds ecological work and rebuild a road in the High Peaks Wilderness Area.

When we initially hiked in to the Dudley Brook area to see this work, starting at the Mount Adams/Allen Mountain parking area on the Tahawus Road, on November 11th, the DEC had taken out about a dozen pits and mounds and put in a temporary culvert and bridge to support its heavy machinery. (Click here to see pictures of DEC’s heavy machinery.) DEC had stockpiled machinery and supplies at a log landing along the Primitive Corridor that cuts through that section of Wilderness and connects conservation easement lands, one part long leased by the Opalescent Club. A follow-up trip on November 21st found that 51 pits and mounds had been removed along a 0.83-mile stretch of the abandoned road. The DEC’s work was clearly returning this roadway to a condition that makes it accessible for motor vehicles. (Click here for pictures where the DEC has torn out pits and mounds and rebuilt the road.) DEC’s current work has made this abandoned roadway once again into a wide, flat road. DEC has supposedly stopped for the season and pulled its heavy machines out of the Wilderness area. I’m told that DEC has reconstituted more than one mile of the abandoned and reclaimed roadway. 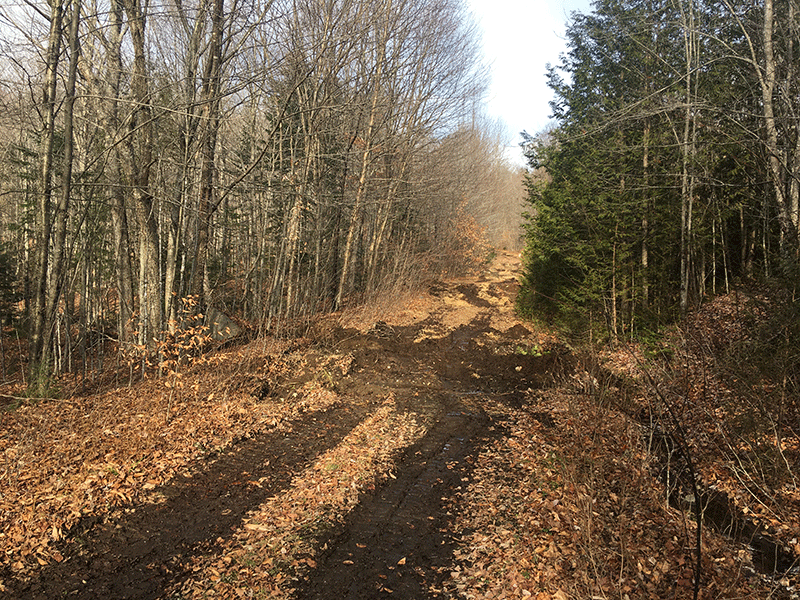 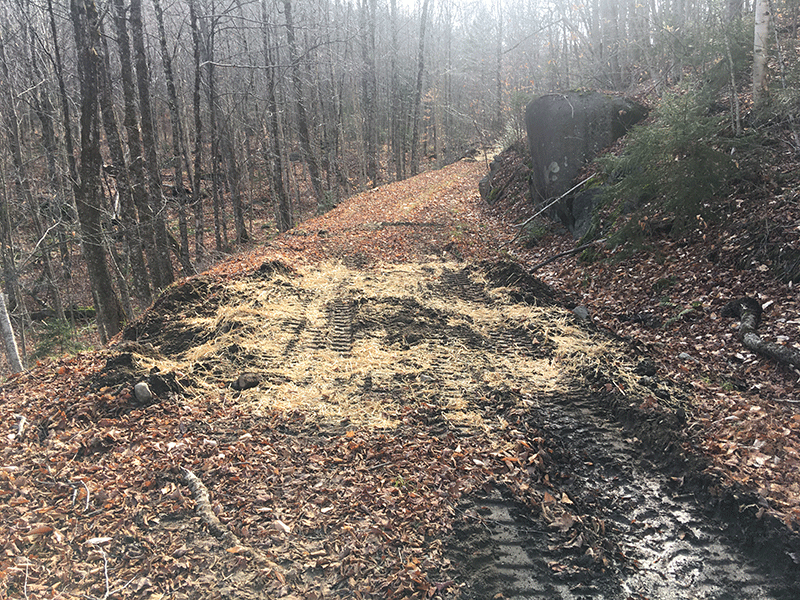 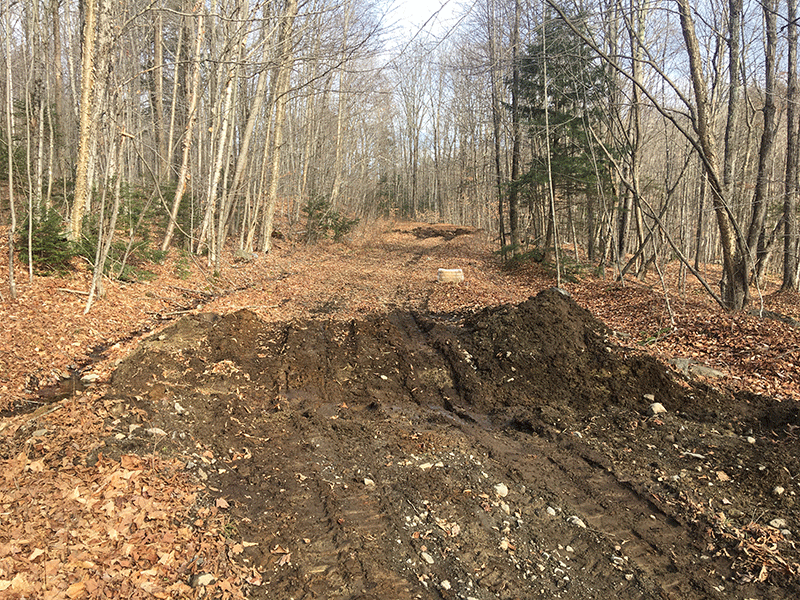 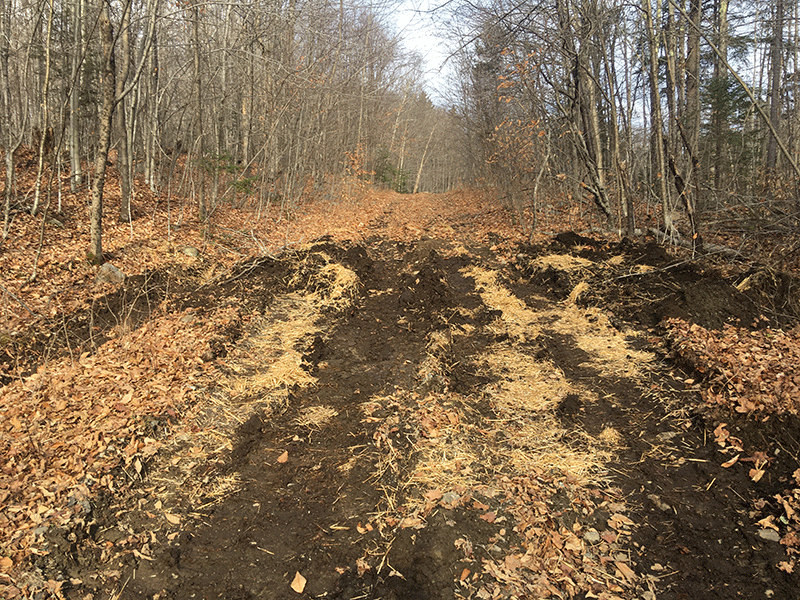 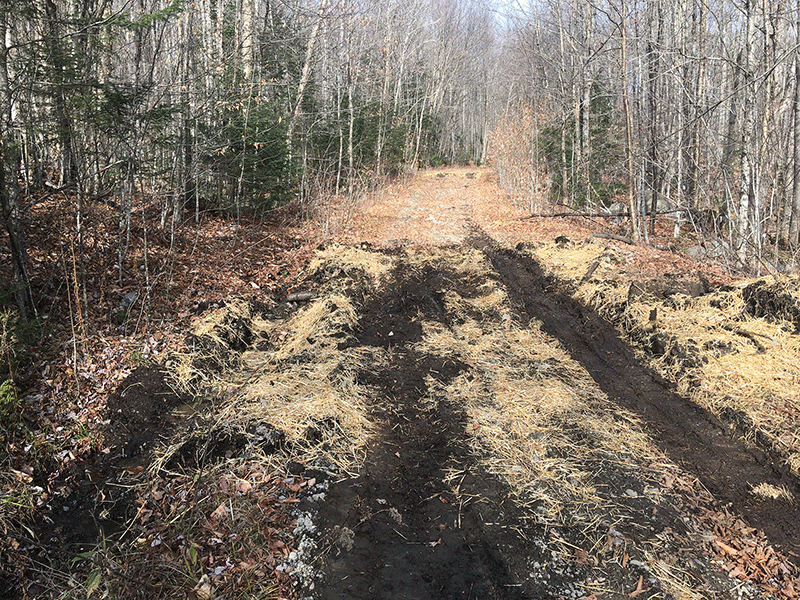 These pictures above show recent work by the DEC to remove pits and mounds and rebuild a roadway in the High Peaks Wilderness Area.

The DEC rebuffed our concerns and argued that the work it’s doing now is simply to correct mistakes made by DEC staff in 2019-20 that somehow escaped the notice of senior DEC officials in Albany for two years until they discovered problems in the late summer of 2021. They say that the faulty restoration work must be dismantled in order to protect water quality, protect public safety, and facilitate revegetation. DEC’s rationales seem fanciful.

Our field assessments on November 11th and the 21st did not find water quality or public safety issues. We have a hard time accepting these as rational or reasonable explanations to justify the work underway. The reality of the situation, as it appears to us, is that the DEC is reconstituting and rebuilding a roadway in a Wilderness area, which is a direct violation of the Adirondack Park State Land Master Plan. This rebuilt roadway will be accessible for use by motor vehicles and this illegal incursion and non-conforming use will remain in the High Peaks Wilderness Area for the foreseeable future.

Let’s look at water quality. Many places among the hundreds of places where work was done in 2019-20 to reclaim the roadway resembled large waterbars, similar to over-sized waterbars on Class II Community Connector Snowmobile Trails and wide trunk trails in the Forest Preserve. We fail to see how DEC’s new work, where mounds over a water trench were dismantled and the roadway was flattened on both sides of a new trench is either a correction or an improvement in water quality protection.

Let’s look at public safety. DEC leaders claim that the pits and mounds on the reclaimed roadways are a public safety hazard. DEC argues that lost hikers utilize old roads in the Forest Preserve, such as those in the MacIntyre East area, to find their way out. The DEC argues that the reclaimed roads are dangerous and difficult to walk upon, and because they were intentionally constructed by the DEC they raise a liability issue. These arguments strain credulity. First, this part of the MacIntyre East area is currently a trailless area. Public access is very difficult and requires a ford of a major river. Second, traversing the pits and mounds on reclaimed roads is far easier than bushwhacking through forest dominated by younger trees. Third, the State Land Master Plan does not authorize retaining roadways in Wilderness areas for public safety. Fourth, the liability concerns are not credible. The public safety claim is without merit.

Let’s look at forest regeneration. DEC also states that the reclamation work had failed because no trees had grown on the mounds within the last two years. The soils in the reclaimed roadway, where prodigious amounts of gravel and sand have been used over the years, can hardly be seen as optimum soils for tree growth. Moreover, these areas were heavily disturbed and mounds of mineral soils will take years to see tree growth. The DEC knows this. There are many upslopes on wide benchcuts on Class II Community Connector Snowmobile Trails that were built in 2011-2015 on the Seventh Lake Mountain Trail and Harris Lake Trail that have not regrown trees in years in far more fecund soils. Given that it’s been only two years at the longest point in time where the first mounds were built, that’s hardly adequate time for forest regeneration. Moreover, if tree growth is a concern of DEC leaders, a crew with shovels could easily transplant into the new mounds in the center of the roadway thousands of small trees that have grown up on the edges of the roadways. We also note that the older restored sections from 2019 show more vegetation than the sections restored in 2020. The forest restoration claim is without merit.

We also question the vast expense that the work to reverse ecological restoration and reconstitute a road is costing New York State taxpayers.

The reality is that DEC leaders in Albany have taken over this project and are undoing the ecological reclamation work. They are adamant that what will remain on the ground after the big machines stop their work will not be a road. Yet, to our eye what the DEC is doing now sure looks a lot like a road, cuts through the forest like a road, lays across the land like a road, and functions like a forest road. It’s hard to believe that what will remain after all is said and done will continue to look like, and possibly be used as, a road for years to come. 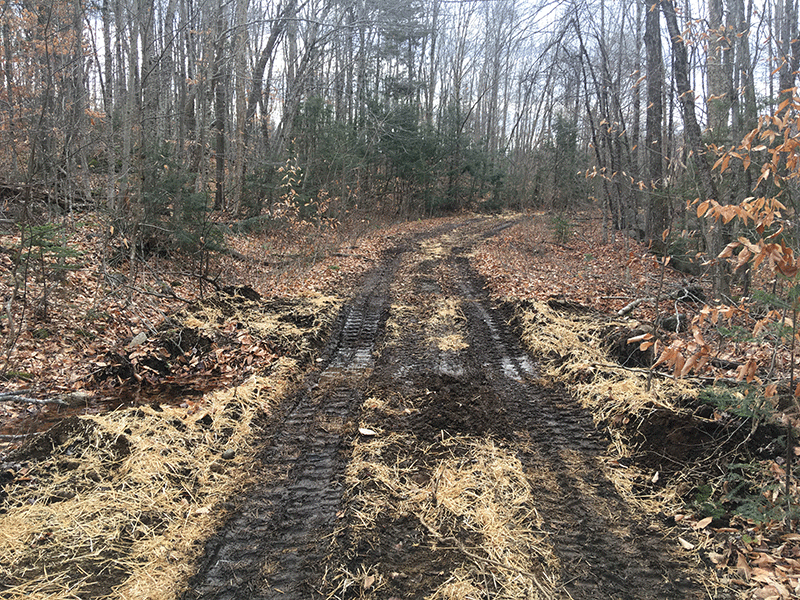 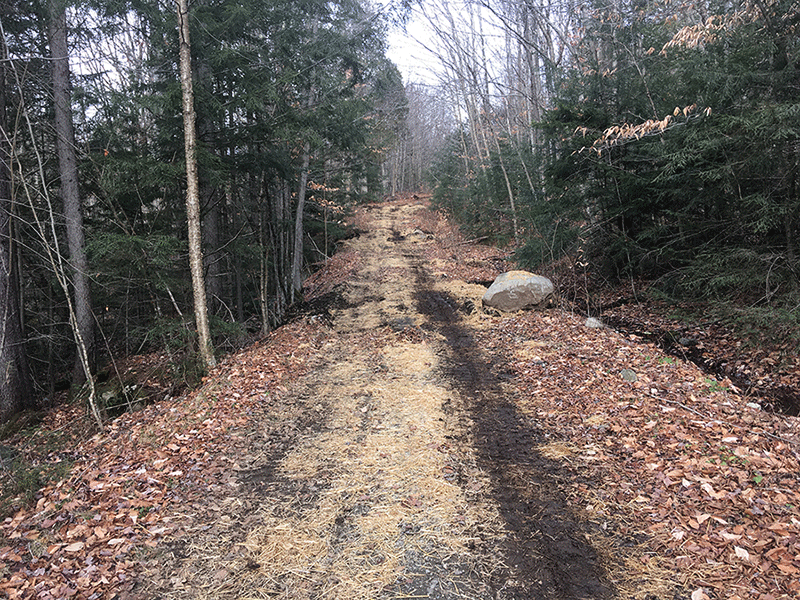 These pictures show two sections of the recently reconstituted roadway by the DEC where ecological restoration work was removed.

This is a big moment for the Adirondack Park Agency. We saw a new change at the top in Albany that is supposedly ushering in a new respect for the rule of law and transparency in state government. Will the APA uphold the Adirondack Park State Land Master Plan’s prohibition on roads in Wilderness areas? Will the APA buy the DEC lines about corrective actions, water quality, public safety and forest regeneration? Will the APA show newfound independence?  Click here to see our letter to the APA calling for a full investigation.

To its credit, the APA says it has opened an enforcement investigation into the DEC’s work on this roadway in the High Peaks Wilderness. We’ll all be interested to see their report. It’s been a long time, many years, since the APA has managed to hold the DEC accountable for Forest Preserve management violations. But at one time, the APA did it on a regular basis. The APA staff and Board may want to dust off those files and relearn how such things were done.

This episode is a headscratcher. This episode shows a Department of Environmental Conservation that is in conflict with itself, that does not know what it thinks on fundamental Forest Preserve management issues, and has major operational problems when senior officials in Albany can’t manage to get out in the field for two years to check in on a novel cutting-edge project. It shows a state agency that spends tens of thousands of dollars on ecological restoration work to remove roadways in Wilderness lands one year and then spends tens of thousands of dollars the next year to undo that very same restoration work and reconstitute a road in Wilderness lands.

No matter how one tries to spin it, this is a Department of Environmental Conservation management fiasco.

This article was also published on the Adirondack Almanack.