Oral arguments were made on March 23, 2021 at the New York Court of Appeals in lawsuit by Protect the Adirondacks against the Department of Environmental Conservation and Adirondack Park Agency over alleged heavy tree cutting and impairment of wild nature in construction of class II community connector snowmobile trails.

The last stop in the 8-year odyssey for Protect the Adirondacks in its legal challenge to uphold and defend Article 14, Section 1, the famed “forever wild” clause of the State Constitution, took place on March 23, 2021 with oral arguments at the New York Court of Appeals, the state’s highest court. Protect the Adirondacks defended a 4-1 decision at the Appellate Division, Third Department, that ruled that state agencies had destroyed an unconstitutional number of trees (“timber”) on the public Forest Preserve as it undertook the construction of controversial class II community connector snowmobile trails.

PROTECT’s lawsuit challenged the construction of the first 34 miles of these new road-like snowmobile trails. The state wants to build hundreds of miles of these trails in the public Forest Preserve throughout the Adirondacks. A restraining order against class II trail construction has been in place since 2016.

Article 14, Section 1, of the State Constitution reads: “The lands of the state, now owned or hereafter acquired, constituting the forest preserve as now fixed by law, shall be forever kept as wild forest lands. They shall not be leased, sold or exchanged, or be taken by any corporation, public or private, nor shall the timber thereon be sold, removed or destroyed.” 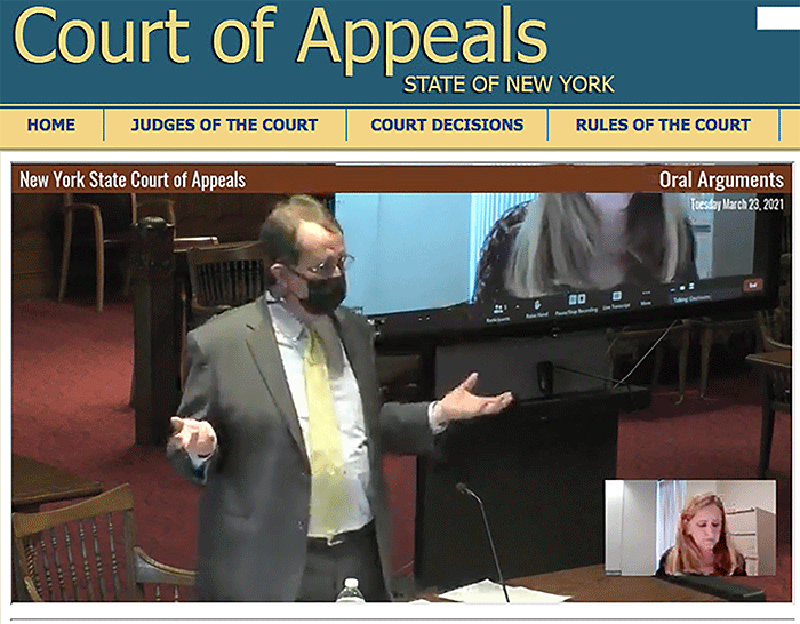 You can watch the entire oral arguments here. Our case Protect the Adirondacks vs the Department of Environmental Conservation and Adirondack Park Agency was the first heard on the Court’s video and it lasts about 1 hour (the arguments start at minute 31:51). John Caffry, from the Glens Falls law firm Caffry and Flower, is the lead attorney on this case, and he handled the oral arguments for Protect the Adirondacks. The questions from the justices to the attorneys on both sides were thoughtful and incisive. It was a hot bench.

We expect a decision within the next 30-60 days.

The Cuomo Administration has made the expansion of motor vehicle use on the Forest Preserve one of its biggest priorities in the Adirondack Park. The Appellate Division decision put the brakes on the Governor and state agencies. There are a wide variety of public recreational activities that can be facilitated on the Forest Preserve, but these must be managed in a way that complies with the State Constitution and the forever wild protections.

This lawsuit has been a massive effort by PROTECT and its pro bono attorneys, John Caffry and Claudia Braymer.

The decision by the Court of Appeals will govern state management on the Forest Preserve for decades to come.

In early 2021, “friend of the court” Amicus Briefs were submitted by various organizations and interests in support or against PROTECT’s position.

Here are the Amicus Briefs in support of PROTECT’s position:

Here are the Amicus Briefs in support of the State’s position:

Generally, Amicus Briefs are not that big a deal in a lawsuit like this where there was a strong factual basis from an actual trial, historic case law precedents, and two lower court decisions. PROTECT responded to the opposition briefs: