4th shipment of over 20 new oil tankers was transported into the Adirondack Park on November 15th; over 80 oil tankers are now stored on siding track on the Boreas River and south of Tahawus Mine on the Opalescent River

Iowa Pacific is storing out-of-service oil tankers on the Sanford Lake Railway, which is a 30-mile-long dead-end track between North Creek and the Tahawus Mine in Newcomb. Iowa Pacific so far has stored over 80 oil tankers on siding track along the Boreas River in Minerva and along the Opalescent River in Newcomb. 22 open hopper out-of-service railcars have been stored for more than one year on siding track along the Hudson River outside of North Creek along Route 28. The railroad company says that it can store over 2,000 used oil tankers along the Sanford Lake Railway.

“Iowa Pacific is in the process of creating a linear junkyard that could stretch 25 to 30 miles in length through the central Adirondacks, including through vast stretches of the public Forest Preserve. These oil tankers are being stored indefinitely and could be here for years,” said Peter Bauer, Executive Director of Protect the Adirondacks. 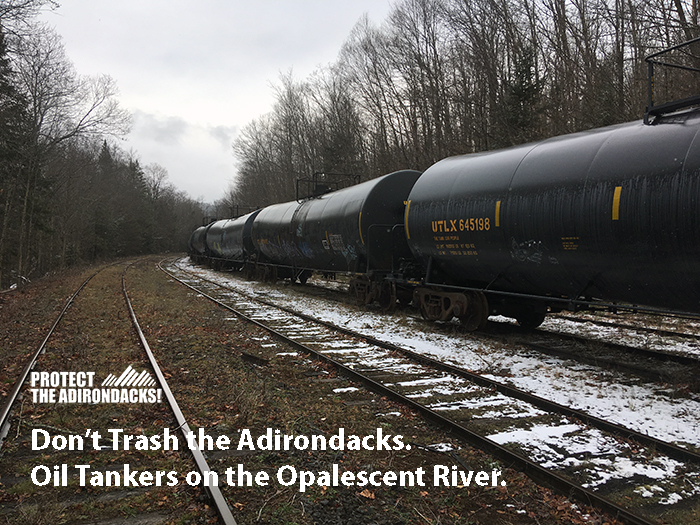 Over 40 oil tankers are now stored on siding track south of the Tahawus Mine in Newcomb on the banks of the Opalescent River. This land is classified as Resource Management under the APA Act and is within the designated “Wild River” corridor under the Wild, Scenic and Recreational Rivers Act.

To date, the State of New York has expressed its concerns about the activities of Iowa Pacific Holdings, but neither the Adirondack Park Agency (APA) or Department of Environmental Conservation (DEC) have intervened to halt storage of out-of-service railcars. Protect the Adirondacks believes that both the APA and DEC have regulatory authority to review and prohibit this activity. Governor Cuomo has denounced the railroad company for storing these railcars in the Adirondack Park. 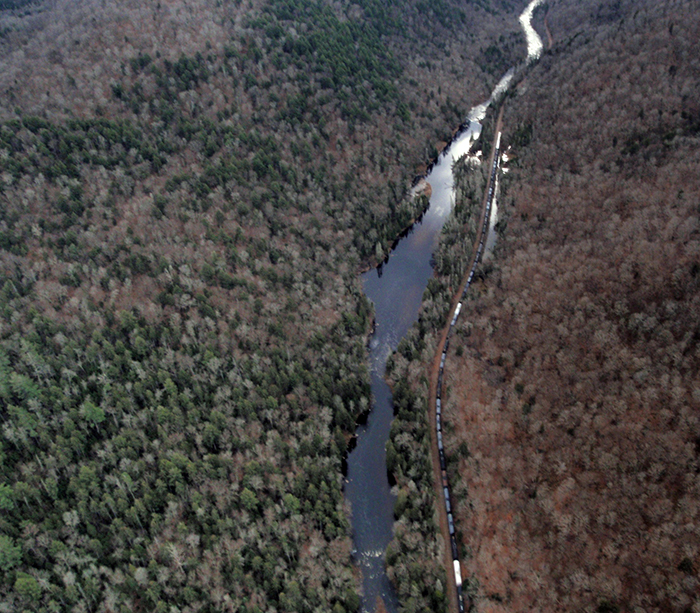 Iowa Pacific Holdings owns and operates the Saratoga & North Creek Railway, which runs a tourist train, on tracks in the Warren County and Saratoga County, which it leases from Warren County and the Town of Corinth. This section of track is approximately 40 miles and runs from Saratoga to North Creek. Under the terms of its leases no railcars can be stored on the rail lines in Warren and Saratoga counties, but the company claims it can transport out-of-service rail cars through these counties to the Sanford Lake Railway, which begins in North Creek and runs through the north end of Warren County, into Hamilton County and Essex County. Iowa Pacific is currently storing railcars on the Sanford Lake rail line in Essex County.