The US Census released its first cut at the 2020 decennial census last week. This data is limited, delivered for the purpose of redistricting for statewide and federal elected representatives. Much more detailed data will be released to the public at the end of September with population data at the town and county level. In 2022, we’ll get more data on age and race as well as economic data.

While New York State gained 823,147 people, the 10 downstate counties gained some 828,352 new residents, exceeding the state’s overall growth. That means that in the 52 counties spread through Upstate New York, there was a total net loss of over 5,000 residents from 2010 to 2020. Throughout Upstate, 13 counties saw population gains and 39 experienced losses. As a region, Upstate New York was basically flat with regards to population growth, whereas New York City and Downstate saw significant gains. 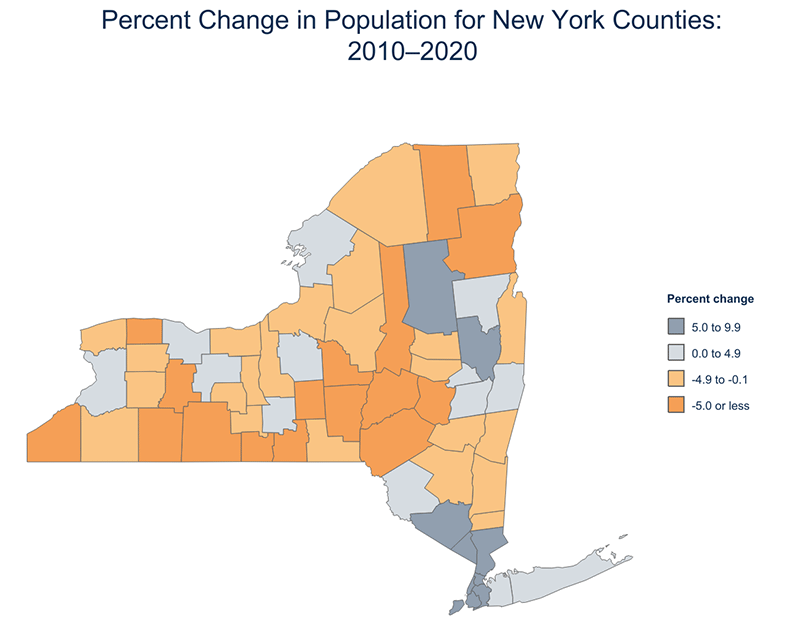 As the chart at the end shows, Saratoga County gained over 15,000 people, while Hamilton gained 271 and Warren gained just 30. The biggest drops among Adirondack counties were Franklin and Herkimer counties, each of which saw losses of more than 4,000 people. One note of caution is that the prison population in New York State has sharply decreased in recent years and the Census counts inmates as residents in the community where they are imprisoned. The 12 Adirondack Park counties are home to a number of state and federal prisons, so there needs to be some adjustments for the prison population changes in these numbers. Nevertheless, a regional loss of -0.07%, some 7,300 people out of 1.013 million, is basically flat.

Warren County, of course, is split by the Blue Line, with big chunks of Lake Luzerne and Queensbury outside the Adirondack Park, as is all of the City of Glens Falls. The 2020 Warren County population of 65,737 is the county’s all-time population high. It’s up 30 people from the 2010 US Census number of 65,707 residents.

New York City gained over 600,000 people and the 10 Downstate counties saw over 800,000 new residents. Upstate was basically flat. This population shift will certainly create issues in how state Assembly and Senate seats and federal Congressional seats are redrawn for the 2022 election. For instance, the math says that roughly six Assembly seats will shift from Upstate to Downstate. New York is set to lose one congressional seat, but redrawing the state’s congressional map with one less seat is compounded by the growth in the state’s population downstate. Over 13.4 million of the state’s 20 million residents live in the 10 downstate counties.

The town-level data that will be released by the US Census next month will tell us a lot more about trends across Adirondack Park communities. The initial data released tells us a lot about population trends across New York State, especially relative to Upstate and Downstate. Though Schoharie County came close, with a -9.2% loss, there were no double-digit drops across Upstate counties, and many were relatively flat. The growth of Upstate counties with major cities, like Buffalo, Albany, Rochester and Syracuse, also confirms larger national trends in the U.S. of growing metropolitan areas and shrinking rural areas. 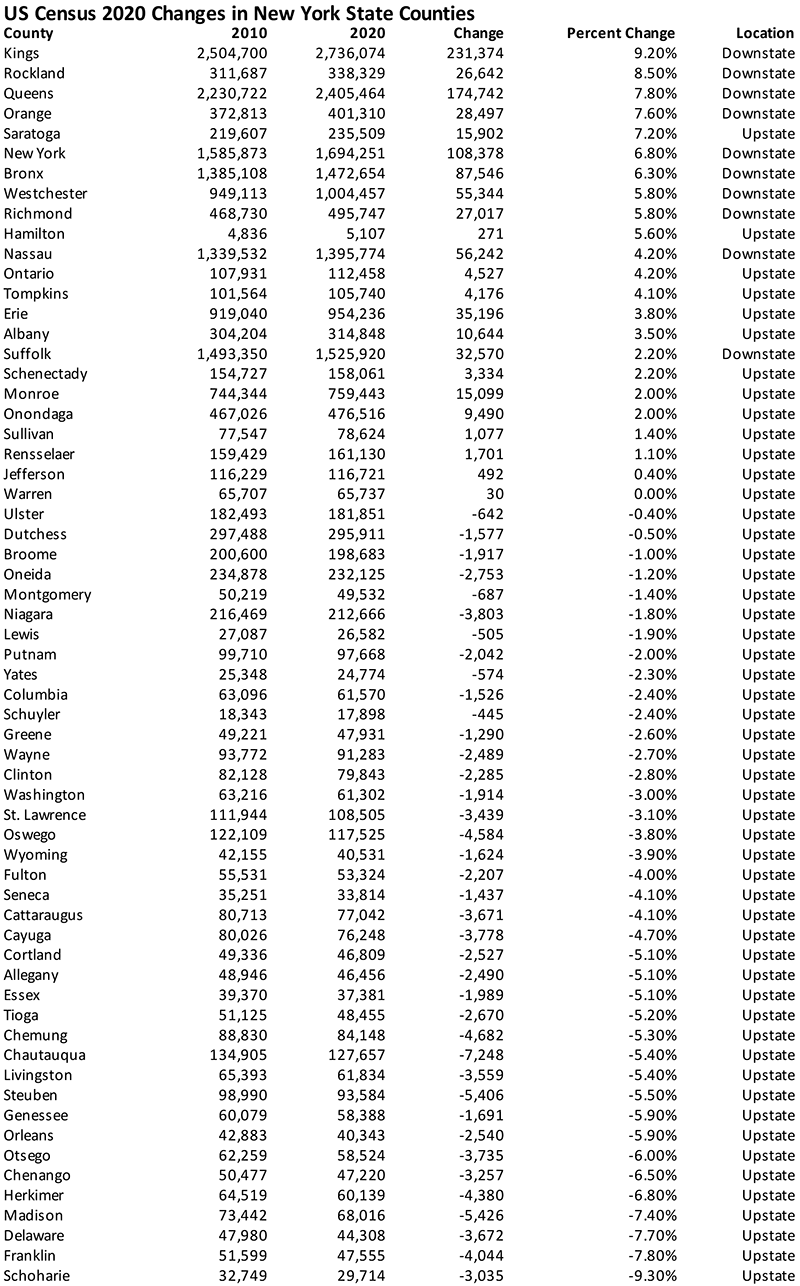