On November 8, 2022, New Yorkers will be asked to vote on a $4.2 billion Clean Air, Clean Water, and Green Jobs Bond Act.  Protect the Adirondacks supports this Bond Act, which we see as a once-in-a-generation opportunity to make a massive investment in the protection of New York’s natural resources and make a down payment on transitioning to a durable climate change resilient infrastructure. In all corners of New York, local municipalities are crying out for infrastructure funding to help meet pressing demands for vital improvements to public water systems, water quality protections, flood control mitigation, wetland restoration, shoreline and coastal protections, and to help protect the most sensitive and beautiful wild areas in the state. We encourage all New Yorkers to “VOTE YES ON PROPOSAL 1” on Election Day on November 8th!

Here’s the ballot language for Proposal 1:

What is a Bond Act?

A bond act is a governmental action to authorize a state (or city, village, town, or county) to borrow money to fund a public benefit project. Once a bond act is approved by the voters of the state (or municipality), bonds are issued that are purchased by investors. These bonds are essentially loans that the state/municipality will repay to the bondholders over a fixed period of time according the the terms of the bond. Theses bonds will be repaid within at least 30 years, and bond act money may only be used for a series of capital projects described below. Only authorized projects, delineated in the enabling legislation, can be funded with bond act monies. 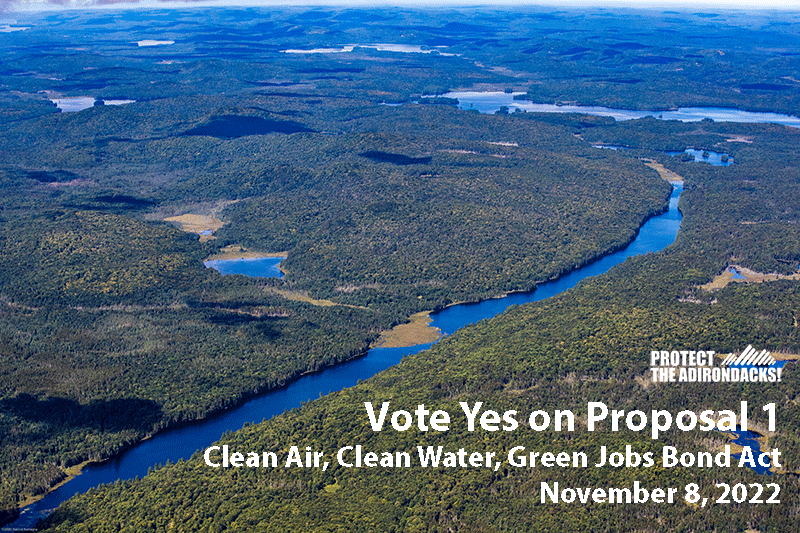 Based on an economic impact analysis, the report found that the Clean Air, Clean Water, and Green Jobs Bond Act could create or support 84,000 jobs in New York. This results from an estimated $8.7 billion in project spending, broken into the following categories:

At least $200 MILLION for air and water pollution elimination in environmental justice communities.

At least $100 MILLION for climate adaptation and mitigation projects.

At least $200 MILLION for wastewater infrastructure upgrades and repairs.

At least $100 MILLION for coastal rehabilitation and shoreline restoration.

At least $100 MILLION to reduce inland flooding and revitalize waterfronts.