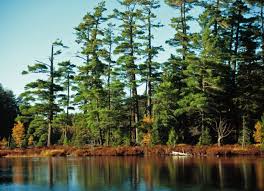 There is an ongoing debate in forestry and ecological circles about the role of young versus old forests in absorbing carbon dioxide, and consequently, sequestering carbon to help stabilize the climate. The long prevailing belief in forestry has been that younger trees are much more effective at sequestering carbon than older trees because of their faster growth rates. Mature forests are often described to the public as woodlands in decline, or geriatric homes for old trees, and the prescription offered for reversing the decline is usually thinning or even clear-cutting. However, studies in the tropics and elsewhere suggest that mature forests, entirely managed by nature, are extremely important in controlling climate by not only retaining huge reserves of carbon, but also by their continued rapid absorption of CO2.

Modern forest researchers are looking below ground, as well as above, to determine the mechanisms by which trees and other forest organic matter hold or release carbon, and on what time scales. Scientific research has moved well beyond the self-serving beliefs of the timber industry that forests must be kept in a perpetually juvenile state for the purposes of health and uptake of carbon. Carbon absorption cannot be understood simply by appealing to more rapid growth rates of younger trees. A 1% increase in volume of a 500-cubic foot trunk, a 5% increase in a 100- cubic foot trunk, and a 10% increase in a 50-cubic foot trunk is the same absolute change in volume: 5 cubic feet.

My personal trip through the carbon debate has centered mainly around one species: Pinus strobus, or the eastern white pine. As the co-founder of the Native Tree Society (NTS), and an engineer by education, I spend a lot of my time measuring trees for a variety of purposes, and developing field methods that yield more accurate results (see the tree measuring guidelines on our website, www.nativetreesociety.org). An important NTS mission is to develop a comprehensive database of accurate maximum dimensions for a wide range of species, as well as to understand where and under what conditions trees achieve maximum size. But first, a little history.

Members of NTS began measuring tree heights with the combination of a laser rangefinder and an inclinometer in the mid-1990s. We developed better methods for measuring tree height than the error-prone tangent-based techniques traditionally employed by timber cruisers. My early objective was to be able to measure to within 1.5 feet of the height that would be obtained by a tape drop, during a period when laser rangefinders had an advertised accuracy of within 3 feet. And today, a few of the newest instruments allow us to measure distances accurately to within a couple of inches.

Compare these tolerances to traditional tree-height methods that are often off by between 5 and 10 feet, and sometimes considerably more, for the largest and/or tallest trees. We have documented errors to as much as 50 feet, and over 60 feet in four cases!

These mistakes are usually traceable to the measurement method used and how it is applied. Champion and older trees that possess complex shapes with broad crowns, and tops that are horizontally separated from their bases by ten to fifteen feet or more, require specialized methods. To be fair, traditional techniques used by professionals work sufficiently well for younger trees that have straight trunks and tops positioned vertically over their bases. But these are not the trees that are our subjects of interest.

The tie-in between height errors and carbon sequestration is that for the bigger, older trees, the magnitude of the measurement errors has precluded tracking their annual growth with sufficient accuracy to calculate annual volume increases and convert them to the carbon sequestered. However, with our latest methods, and with the use of instruments that allow us to measure diameters at a distance to within 1 inch, we are able to track seasonal growth for species like the eastern white pine. We have study sites in the Great Smoky Mountains of Tennessee and North Carolina, the Berkshires of Massachusetts, the Allegheny Plateau of western Pennsylvania, and the Adirondacks of New York. Pines in these studies span an age range of 30 to 200 years with a few trees over 375 years in age.

I will now illustrate how we can compare changes in trunk volume among trees of different sizes. The profile of four actual trees is presented below. The first two are from relatively young stands that we’ve sampled. The last two are older trees: (1) the Jake Swamp white pine in Mohawk Trail State Forest, Charlemont, MA, (New England’s tallest tree), and (2) the Grandfather Pine in Monroe State Forest, (Massachusetts’s largest single-trunk white pine). The table shows the results of comparing annual volume increases for the four trees.

Notice that the percent of the volume increase, as applied to the starting volume, drops dramatically as trunk size increases. We would expect this. But also, notice that the absolute volume change increases with tree size. In addition, the trees are arrayed in order of age. Jake Swamp is 160, and the Grandfather Pine is nearly 200 years old.

How does the above 4-tree sample compare to an even broader range of sizes? We have measured annual increases in trunk volume of some of the largest pines at between 8 and 12 cubic feet per year, but these were healthy trees. Other large pines in decline did not fare so well. Still they could add volume at the rate of 2 to 3 cubic feet per year.

But these declining trees still have great value: the larger, old pines hold a carbon load of 8,000 to 10,000 pounds in their trunks, and on occasion, we’ve measured as much as 12,000 to 14,000 pounds. By sharp contrast, the young trees typically each hold between 200 and 500 pounds of elemental carbon. If we go from individual trees to an entire forest, the role of the big trees as the principal sequesters of carbon becomes dominant. A sea of saplings is not the equivalent of a mature forest.

A project that NTS hopes to initiate in the summer of 2014 is tracking the annual volume growth of a sample of large white pines in the Adirondacks. This would be a multi-year project. We have a few trees in mind: the Grandmother Tree in Pack Forest, the tallest tree in the Cathedral Grove between 7th and 8th Lakes, and a couple of pines in the Elders Grove near Paul Smith College. However, we would appreciate nominations of other candidates. Trees in Pine Orchard are a possibility. Our objective would be to model the sample trees and then plot their annual volume changes.

Before concluding the topic of carbon sequestration, a question arises. Why isn’t the role of the big trees more obvious? The answer is simple. It is easy to see growth when a tree is small, since the percentage increase is dramatic. However, who would notice a change in radius of 1/20th of an inch or an increase in height of 8 or 9 inches for a tree that is 120 feet tall? The big tree doesn’t appear to be growing, although it is.

The full ecological role of the larger, older trees in our forests has yet to be fully understood. Descriptions often paint biologically mature trees as senescent and declining in economic value, ergo the need for their removal. But the larger, older trees have vastly more important roles to play than conversion into lumber, toothpicks, and toilet paper. As a minimum, they are important to wildlife by creating niches for dozens of species. At the big picture level, they serve to moderate the climate, through carbon sequestration, and in the case of white pines, through releasing compounds that help to cool the environment. Underground, one mature old tree can be the nutritional support, through roots and fungi, for scores of its forest companions. The older trees carry the genetic blueprint of the best of their species. I suspect these roles are only the tip of the iceberg. And let’s not forget their role in nourishing the spirit of we humans down through the millennia.

Locally, the Adirondack region possesses a treasure: its old-growth forests with their abundance of big trees. It is time that they are recognized as among our most valuable arboreal citizens.

Robert T. Leverett is the cofounder and Executive Director of the Native Tree Society (NTS), as well as the cofounder and President of Friends of Mohawk Trail State Forest. With Bruce Kershner he has coauthored the Sierra Club Guide to Ancient Forests of the Northeast. He is also coauthor of Island Press’s Eastern Old Growth Forests, Prospects for Rediscovery and Recovery, and a contributor to several other books on old-growth forests. A principal architect of the Ancient Eastern Forest Conference Series, he is expanding this year to organize a Southwestern Old Growth Conference in Durango, CO, August 4-6, 2014. Leverett is part of a select group revising the guidelines for measuring trees for American Forests National Register of Big Trees. He serves as a forest interpreter for a number of environmental organizations.

Holy boulders of the “tafone” by Evelyn Greene

Holy boulders of the “tafone” by Evelyn Greene

The beautiful Raquette River from Axton Landing to Raquette Falls

The beautiful Raquette River from Axton Landing to Raquette Falls