A year ago, we exposed to the public to a weird incident where the Department of Environmental Conservation (DEC) had worked for two years to tear apart abandoned logging roads on newly purchased lands at the south end of the High Peaks Wilderness, only to go back in with heavy machinery and start to undo their work and rebuild the road. Heavy rains last December limited how much of the road the DEC was able to rebuild before winter set in, but by our measurements they managed to rebuild 0.82 miles.

Click here to read a letter we sent to state agencies in December 2021 alerting them about the many problems with this incident.

Click here to read a new letter to the Adirondack Park Agency about its failure to properly investigate this incident.

According to the Adirondack Park State Land Master Plan (Master Plan), roads are not allowed in Wilderness areas. They are considered a non-conforming use. Through the Unit Management Plan process, any roads in newly acquired lands should be converted to other uses, such as a hiking trail, or abandoned to slowly, inexorably rewild.

The road in question is an extension of the East River Road, which starts on the road to the Upper Works in Newcomb. It runs through Wild Forest lands and then through conservation easement lands. The road extends into the High Peaks Wilderness as a Primitive Corridor, where it connects two conservation easement tracts. 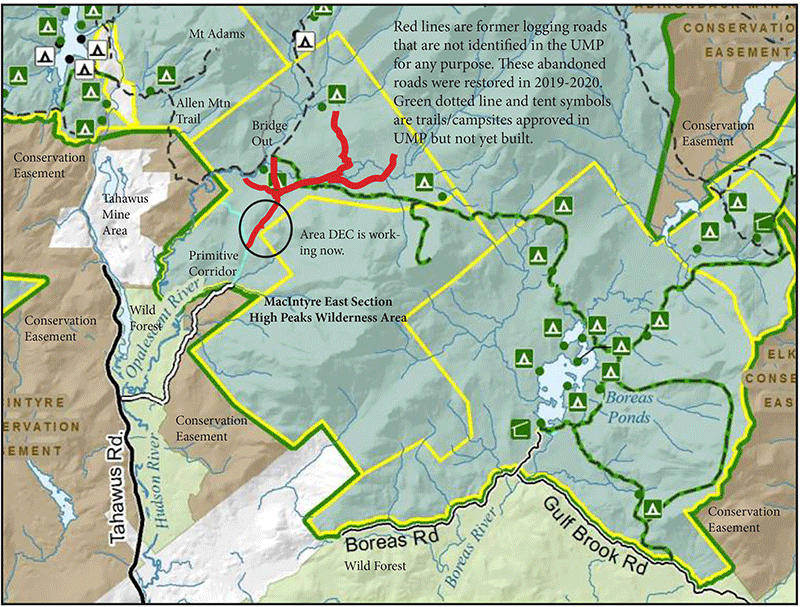 This map shows the location of the illegal road in question.

The state purchased these lands as part of the Boreas Ponds deal. The road is near Dudley Brook, in the MacIntyre East section of the High Peaks Wilderness Area. Under the 2018 UMP Amendment for the High Peaks, the only trail designated for this area was to be the new 8.2-mile White Lily Trail that starts at Boreas Ponds, wraps around White Lily Pond, and then is routed northwest towards the Opalescent River to connect with the existing “trail” to Allen Mountain. These former industrial forest lands had many vestiges from decades of logging, including miles of logging roads replete with benchcuts, borrow pits, and drainage ditches, as well as many grassy and open log landing areas. None of these landscape features were identified in the UMP for conversion to hiking trails or any other type of recreational use. This area was largely designated as a trailless area in the southern High Peaks Wilderness.

After the 2018 UMP Amendment was approved, the DEC approved a Work Plan in 2019 that authorized the reclamation of abandoned logging roads in the Dudley Brook area. The Work Plan stated: “Work will be completed to remove culverts, bridges and reclaim the road surface, on grades. This project will improve the recovery of the natural resources and enhance the Wilderness Experience of future users.”

A “naturalized” area where the roadway was reclaimed with pits and mounds in 2019-20. After two years, this area is starting to revegetate.

The Work Plan further stated: “The intent of the work is to remove the larger infrastructure of the road system, hasten naturalization and support a future trail system. By removing the bridges and allowing the road system to start the recovery process, we provide a blank slate for the future of trail development. By designing the trail system from the start, to be a hiking trail system and not relying on using old roads, the Department is situating itself to create a sustainable trail system that blends with the forested surroundings and enhances the hiker’s overall trail experience.” The stated intent of the Work Plan was to dismantle and reclaim the existing logging road systems in the MacIntyre East area.

This road reclamation work marked a new approach by the DEC. Traditionally, DEC managed abandoned roads on the Forest Preserve through benign neglect, slowly letting them melt back into the forest, a process that takes many decades. In 2019-20, DEC staff undertook “naturalization” work to expedite forest reclamation on abandoned logging roads by creating a series of pits and mounds in the road corridors to mimic a natural intact forest landscape, dismantle the long linear geometric form of the roadway, and expose boulders. Similar work was undertaken on abandoned logging roads near Boreas Ponds.

Then things got weird, really weird.

In the fall of 2021, DEC abruptly reversed course. It brought in heavy machinery and started to undo the “naturalization” work undertaken in 2019-20 and re-installed a long stretch of the roadway. This was an unusual situation. As far as we can tell, the DEC had never removed a non-conforming use in a Wilderness Area and then turned around and re-installed it. Bad weather in the late fall limited how much they could do, but by our count, the DEC’s heavy machines removed 51 sets of pits and mounds and regraded and flattened out 0.82 miles of road in the southern High Peaks Wilderness Area.

At the time, DEC stated that its road reconstruction was necessary to correct purported mistakes in the “naturalization” work, protect water quality and public safety, and facilitate revegetation. DEC’s reversal of its prior forest reclamation work, and its explanation for why that work was supposedly necessary, are problematic in several respects.

A visit to the site in the fall of 2022 found that tangled wads of poorly installed silt fencing remained along with piles of trash. Intermittent streams cross the road over bare ground, causing erosion. There is no revegetation in the regraded roadway, though there is revegetation on the existing pits and mounds built in 2019-20. The road corridor with pits and mounds is no more difficult to travel upon than it is to bushwhack through the surrounding forest. The DEC re-installed road accomplished nothing for water quality, revegetation, or public safety. 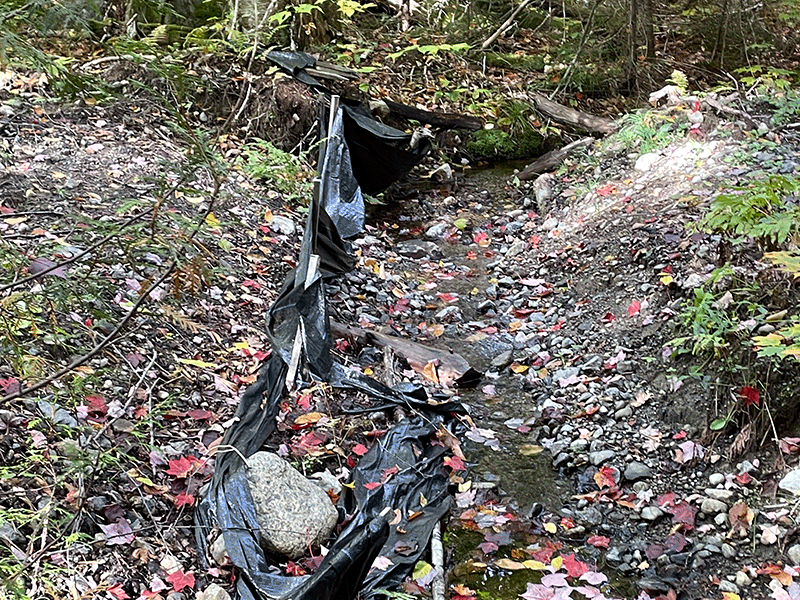 Ineffective silt fencing left on site by the DEC. 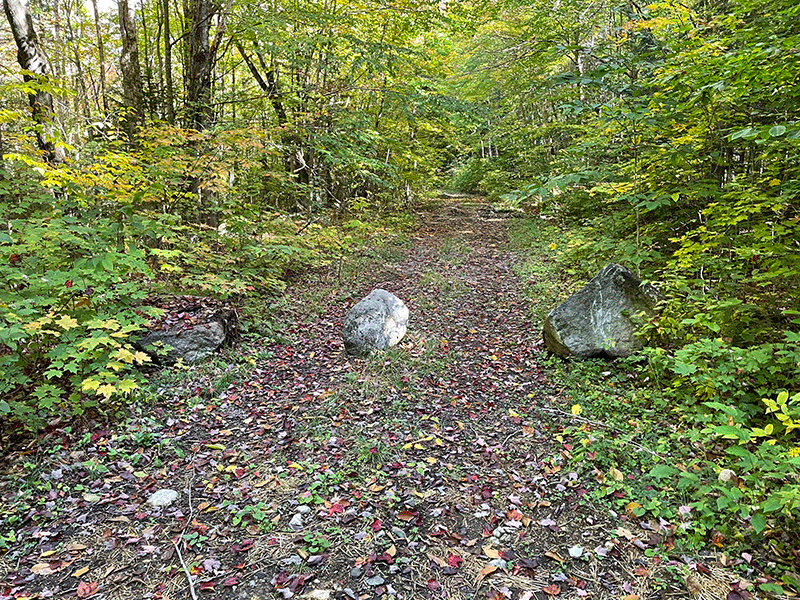 DEC failed to secure the rebuilt road entrance and motor vehicles are now using the roadway.

The Master Plan makes it clear that roads have no place in a Wilderness area:

A wilderness area is further defined to mean an area of state land or water having a primeval character, without significant improvement or permanent human habitation, which is protected and managed so as to preserve, enhance and restore, where necessary, its natural conditions, and which (1) generally appears to have been affected primarily by the forces of nature, with the imprint of man’s work substantially unnoticeable. (p 22)

Nothing in this definition makes a long, linear 0.82-mile roadway allowable in a Wilderness area. This road is not a designated trail under conversion, it is simply an illegal road. 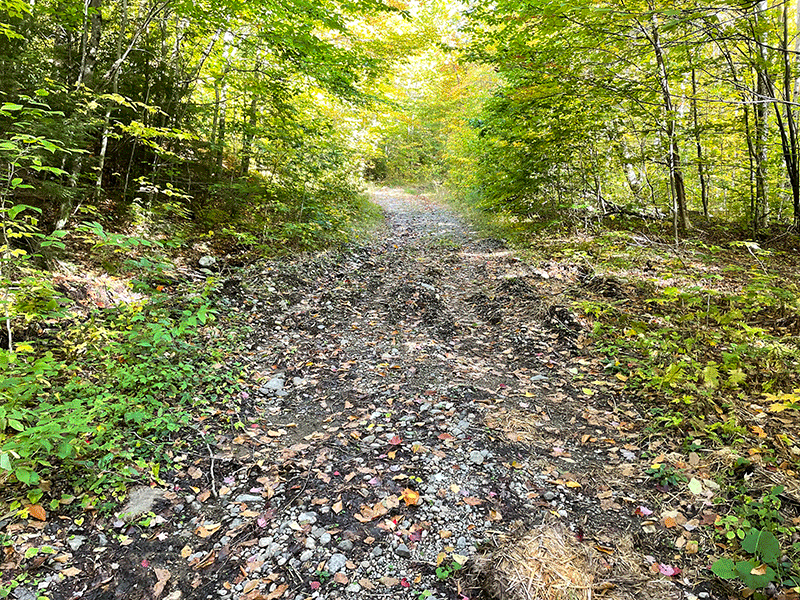 An area where the DEC removed pits and mounds and rebuilt the existing road in the Wilderness area. Note the long linear roadway.

In rebuilding this road in the High Peaks Wilderness the DEC cavalierly violated the Master Plan.

Master Plan violations were brought to the APA, but the agency refused to act. The APA never even went to inspect the site. None of its staff, neither its legal staff, its Forest Preserve staff, its water quality or wetlands staff, none of them went to the site. As the crow flies, APA was content to review the situation from 40 miles away. APA’s “investigation” appears to have consisted of APA asking questions of the DEC and accepting DEC’s answers.

When asked about its “investigation” the APA also refused to provide any meaningful information to the public. A Freedom of Information Act response stated that their correspondence between the APA-DEC on this matter was withheld, and shielded from public scrutiny. We’re talking about public lands paid for with public funds and managed by public employees paid for with public funds. The heavy machinery that rebuilt the road was paid for with public monies. None of this stuff involves important state secrets. Yet, the public isn’t allowed to know about the details of management decisions on public lands.

As the APA sees it, the 0.82-mile road at the south end of the High Peaks Wilderness was not rebuilt and does not really exist. The APA wants us to believe that a 0.82-mile-long, flat, and graded road, that looks in every way like a road, which had been removed a year ago, and was then rebuilt, and is now being used by motor vehicles, is somehow not really a road.