McKenzie Mountain is a challenging 10.6-mile (round trip) hike on a long, steep trail that leads to a variety of stunning views of the High Peaks, Lake Placid, Saranac Lake and the lakes and mountains of the northern Adirondacks. 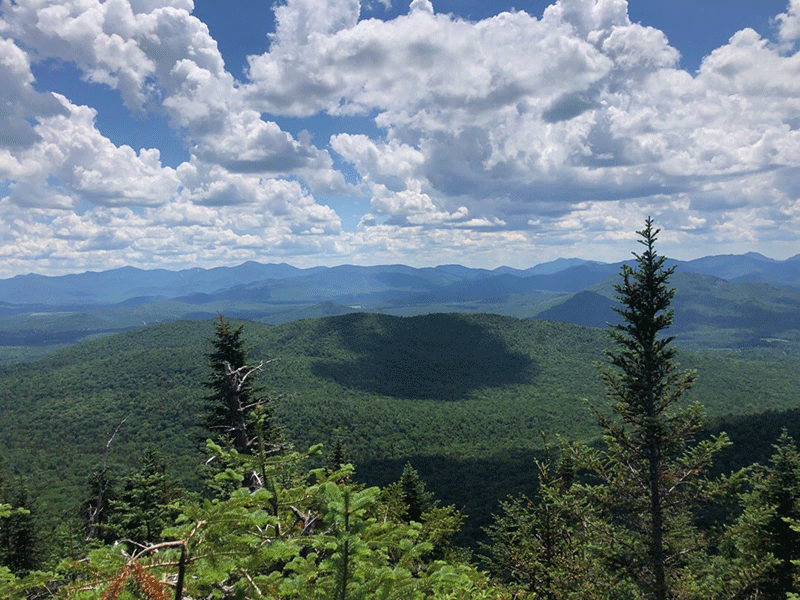 McKenzie Mountain trail cuts through 5.3 miles of the McKenzie Mountain Wilderness, climbing 2,200 feet toward the summit. This hike is challenging over the final stretch, rising 1,000 feet over half a mile, but is balanced out by the early stages where the trail gains elevation gradually and runs alongside beautiful streams and forests. The trail to the mountaintop provides a series of stunning views along the way.

McKenzie Mountain’s 3,861-foot summit is just shy of the 4,000-foot High Peaks that are part of the 46er challenge. McKenzie Pond is less-trafficked than the High Peaks and offers opportunities for solitude. The trailhead is located along State Route 86 between Saranac Lake and Lake Placid, just outside the hamlet of Ray Brook. The parking lot is large and also serves as parking for Haystack Mountain, which is a shorter 3.3-mile hike. For the first two miles, the trails to McKenzie Mountain and Haystack Mountain run together. The trail is well-worn and easy to follow, marked with blue trail markers. 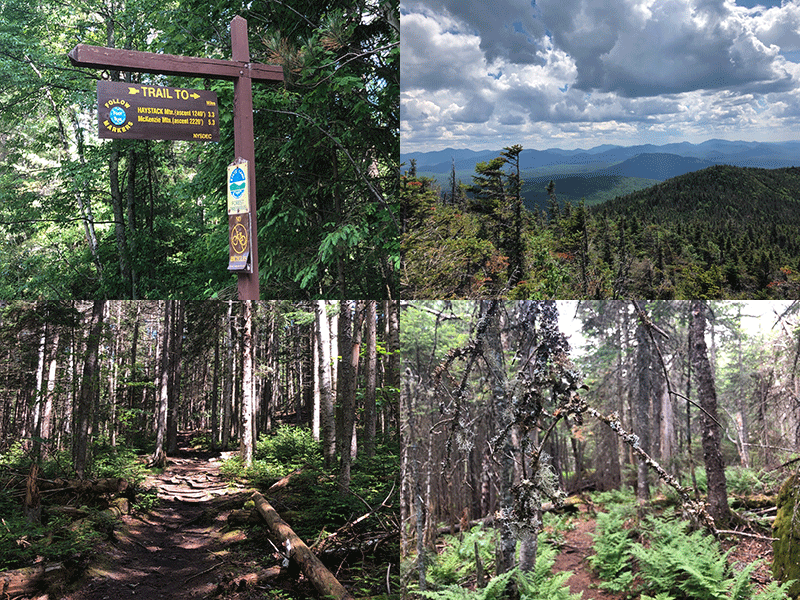 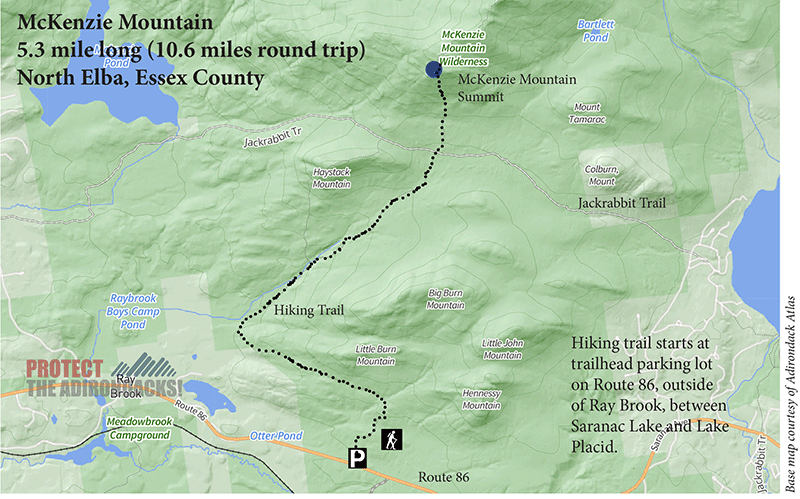 Within a few hundred yards after starting on the trail, the forest gives way to a predominantly maple, ash, and beech hardwood forest. The ash trees here are particularly prominent, not the case in every stand of Adirondack hardwoods. For the first couple miles, the trail follows the base of a ridge, which runs almost perpendicular to the trail as it departs from the far side. This ridge is home to beautiful mossy hardwoods.

The trail runs past an enormous boulder to the left and then passes over a few stretches of rock-lined turnpiking before leading onto a sunny, open rock face at a distance of about 1.5 miles. The trail then descends, crossing over a bog bridge and passing the remnants of an old stone cabin foundation before soon running alongside a wide stream and a series of small waterfalls. 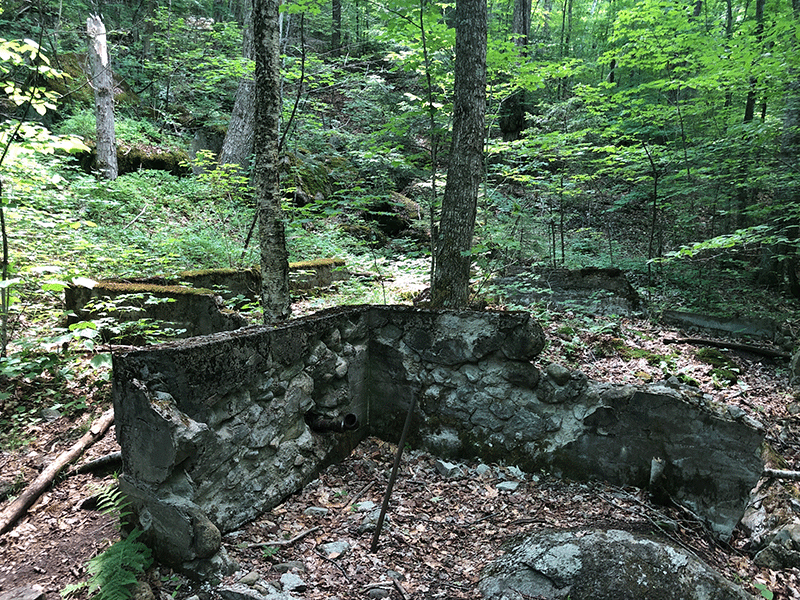 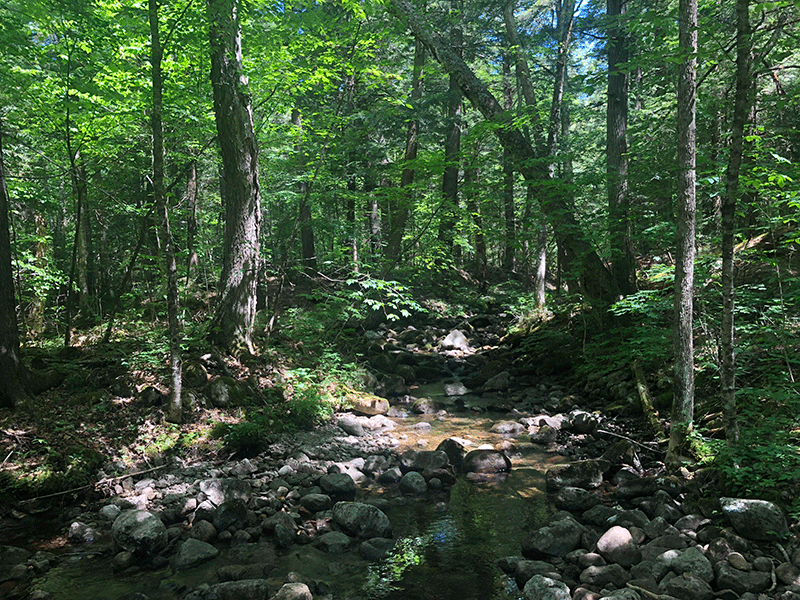 A mile after passing over the rock face, the Haystack and McKenzie trails split, with the McKenzie Mountain trail veering to the right and following red markers. The McKenzie Mountain trail continues to ascend fairly steeply before flattening out through a series of rocky and muddy patches that may be slippery. Around 3.6 miles in, the trail reaches a wide 4-way intersection as it crosses the Jackrabbit Trail. 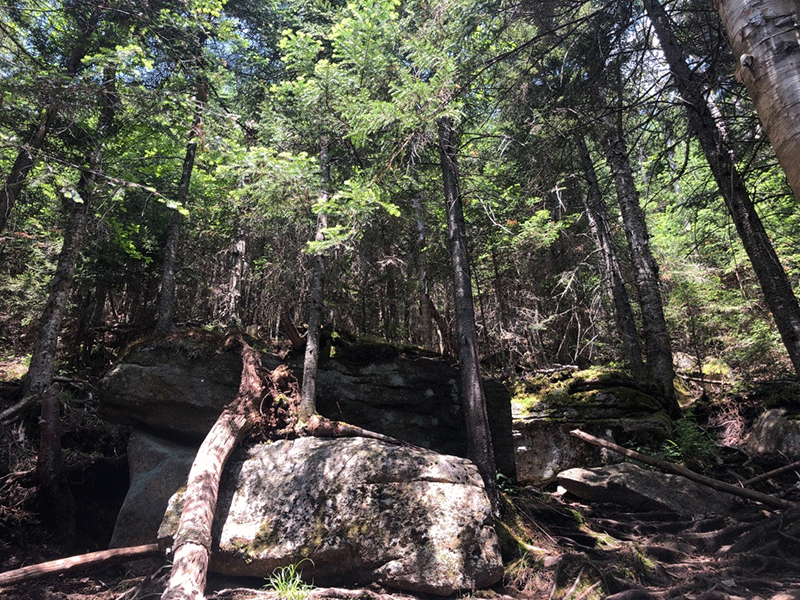 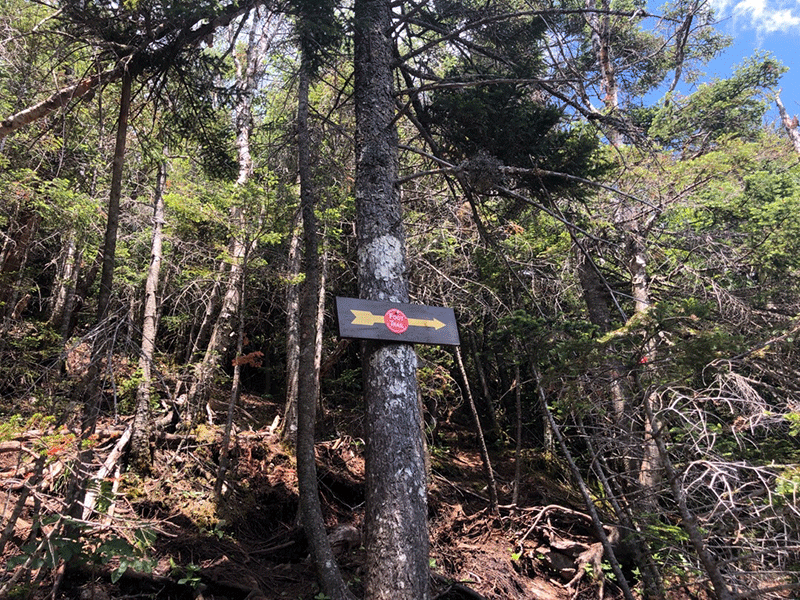 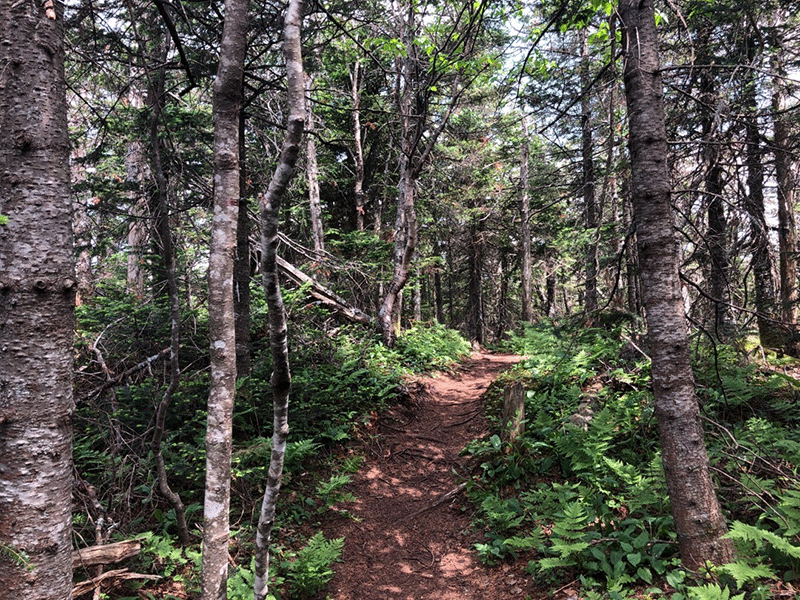 After the intersection, the trail rises gradually for a while before beginning to climb very steeply. Soon the trail widens significantly through a stretch with lots of erosion and exposed tree roots. This section of trail is the most difficult, but after climbing over some sharp rock faces and between mossy boulders, the trail cuts right abruptly to become flat and narrow for a long stretch. The trail then rises again over rocky cliffs and reaches a short marked side trail to the right marked with yellow trail markers, leading toward a beautiful view of the south from a small rock outcrop. 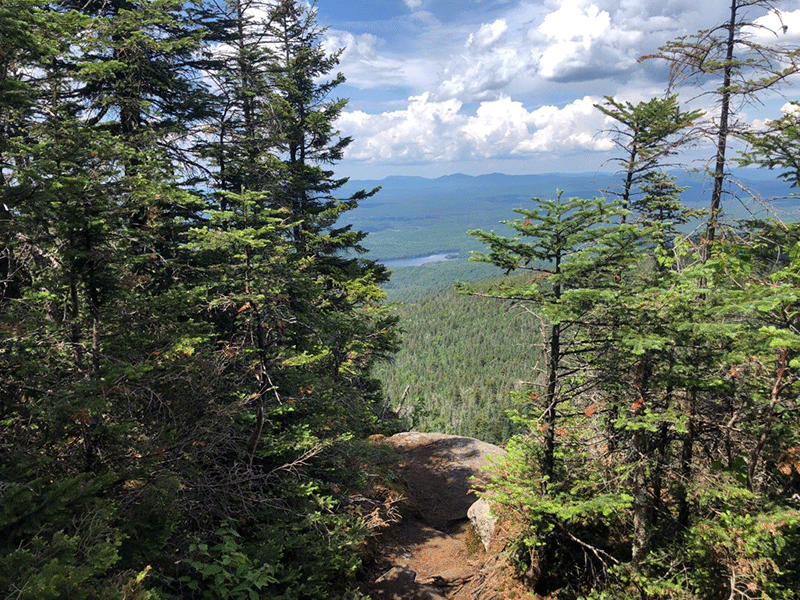 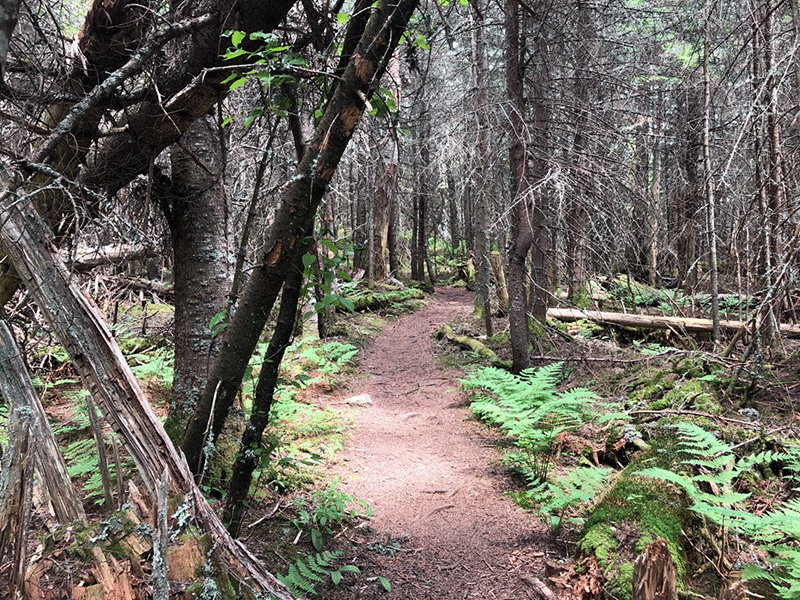 The trail then drops down into a beautiful stretch of mature red pine forest with moss draping over rock faces and lichen hanging from tree branches. After 5 miles, an overlook of the northwest juts out to the left, providing the first clear view of the McKenzie Mountain summit across the ridge in the distance. The trail descends steeply down rock faces one final time before rising for the final ascent to the summit. 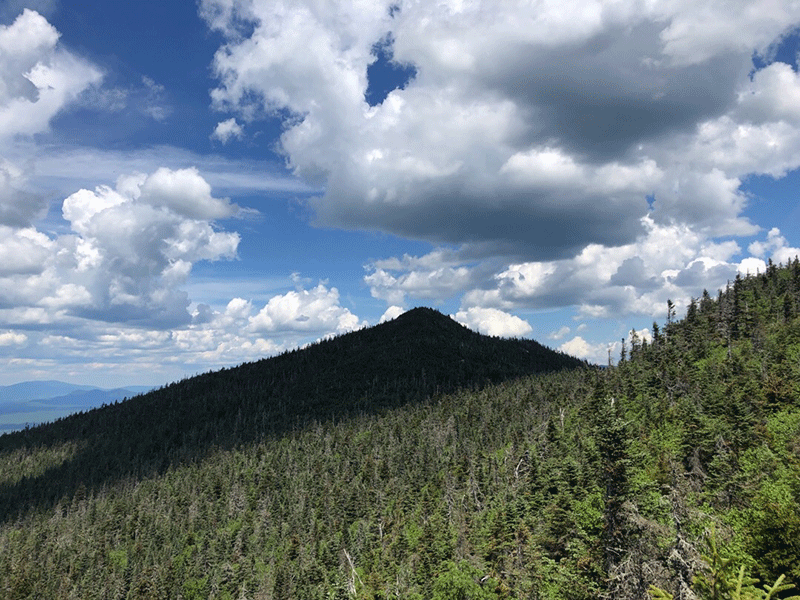 The Summit of McKenzie Mountain

The summit is tree covered and can be easy to miss, so be sure to keep an eye out for the McKenzie Mountain Summit sign nailed to a tree. The summit has a series of side trails that lead to large open cliffs and outcrops that provide stunning views and place to sit. An outcrop on the northwest side shows the Village of Saranac Lake, Baker Mountain, and Lake Flower nestled among the forests in the distance. The overlook on the east overlooks Whiteface Mountain, Lake Placid, and Mt. Whitney. Many High Peaks can be seen in the distance. 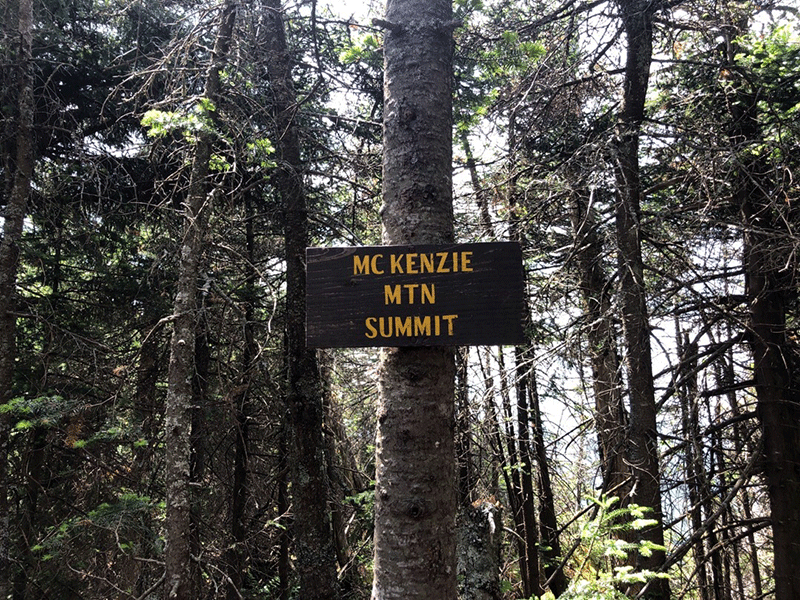 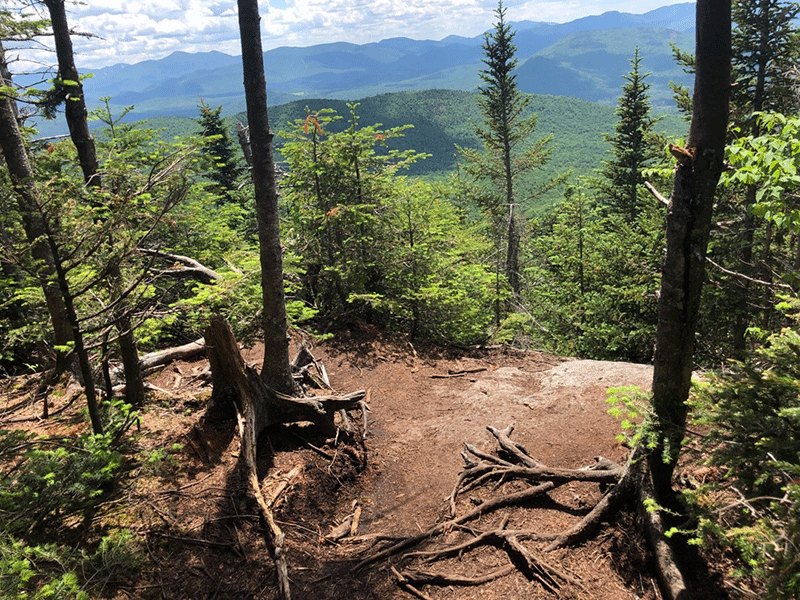 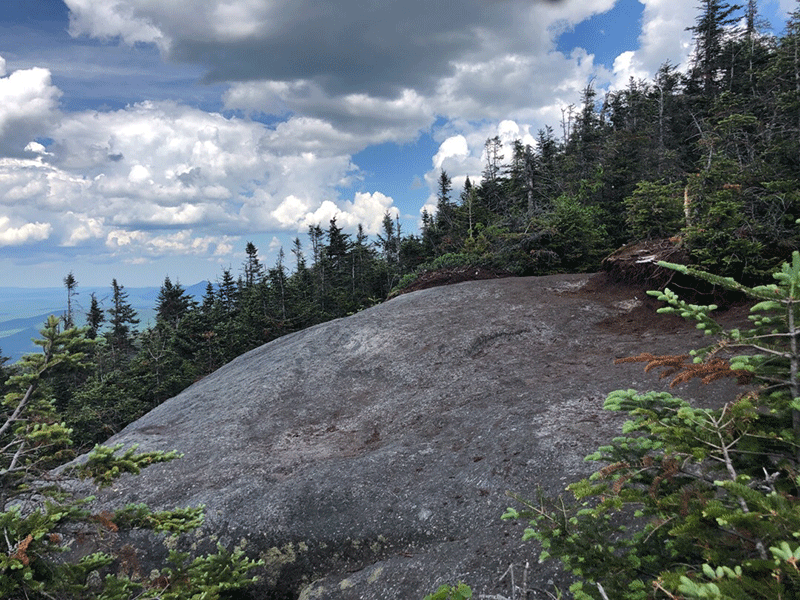 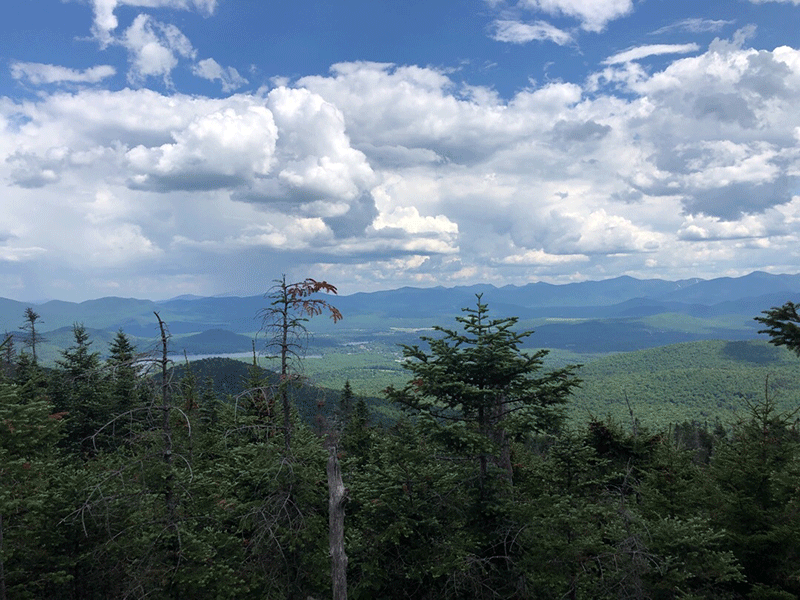 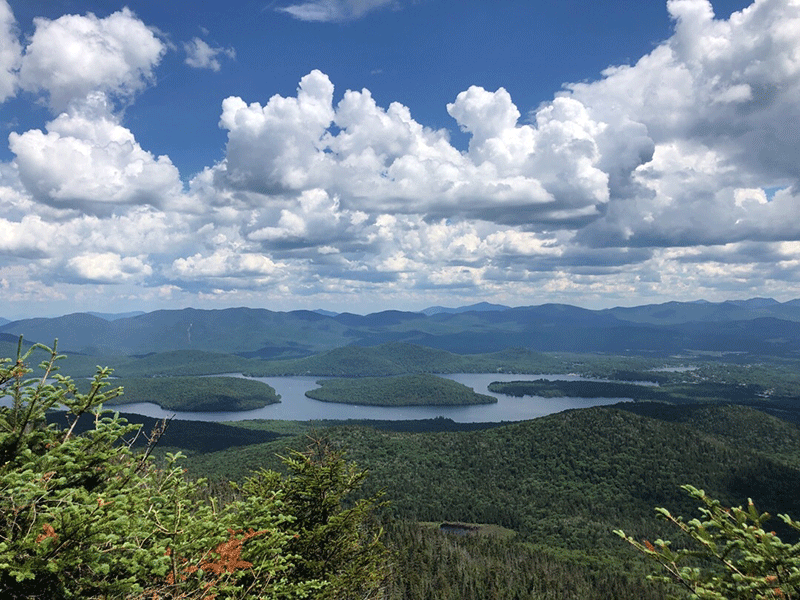 The trail out follows the same route as the trail hiked in.

Please follow “carry in, carry out” rules for all trash and follow other Leave No Trace principles when hiking in the public Forest Preserve and other wild areas. The seven Leave No Trace principles are: 1) Plan ahead and prepare ; 2) Stay on hiking trails and camp at designated areas; 3) Dispose of human waste and trash properly; 4) Leave what you find; 5) Minimize campfires; 6) Respect wildlife; 7) Respect other hikers.

Winter Use: McKenzie Mountain is a popular mountain for snowshoeing and cross-country skiing in the winter.

Click here to become a member of Protect the Adirondacks.