It’s back to school time in the Adirondacks and New York State. One of the things that always happens at this time is reports about school district enrollments year-over-year in a particular area. These stories are useful and interesting, but they usually lack context.

With the beginning of the release of 2020 US Census data in August, Protect the Adirondacks is starting an update of its study The Adirondack Park and Rural America: Economic and Population Trends 1970-2010. The 2020 US Census will enable us to look at a 50-year trend line.

For school district enrollment numbers, these data are provided by the NYS Department of Education, but new Census data helps to provide context. In looking at the numbers for the school years 2010-11 to 2019-2020 from State Ed, we see that in the last decade, New York State public schools saw a drop of over 126,000 school children in all districts for which there was data. This does not include New York City. 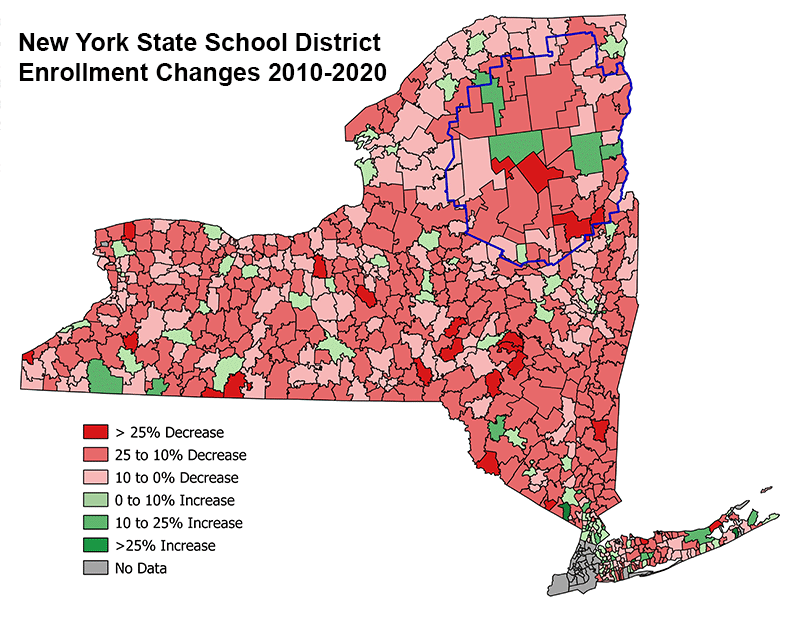 In Hamilton County, Long Lake saw a 12% rise, but that was from an increase of just seven kids, while all others lost. The new 2020 US Census had Hamilton County gaining 271 residents, but its four school districts of Long Lake, Indian Lake/Raquette Lake, Lake Pleasant/Piseco and Wells, (Inlet sends its kids to Webb) saw a combined net loss of 83 students in the decade.

In Fulton County, Broadalbin-Perth saw a minor loss, while Gloversville and Johnstown dropped by double digits. In Saratoga County the huge districts like Shenendehowa, Saratoga Springs, and Ballston Spa were flat or saw minor losses while the more rural areas saw drops. All told, Saratoga County experienced a net loss of over 2,300 students during a decade when the county gained almost 16,000 new residents.

The first cut of the 2020 US Census data provides information primarily for state officials to redraw state and Congressional election district lines. The Census data did not include complete age-range information but did provide data about the number of people in a state’s population who were 18 years old or older and those younger than 18. From this data, we saw that 25 of the 50 states in the U.S. experienced a decrease of young people under the age of 18 years old in their population, including every state in Northeast U.S.

That’s right, these nine states in the Northeast USA grew by over 2.3 million total residents from 2010 to 2020, yet at the end of the decade, there were over 622,000 fewer kids under the age of 18 years old. America is growing older and young people are having smaller families.

The data about the loss of young people is even more compelling when we look at racial trends. For instance, while New York State saw a net loss of 211,815 young people under 18, the number of such kids who were Asian American increased by over 78,000. The number of other race/multi-race kids grew by over 136,000 and Latino or Hispanic kids grew by almost 50,000. Conversely, the number Black kids in New York dropped by almost 106,000, and the number of white kids dropped by over 368,000. This trend has a particular resonance in the Adirondacks and North Country, where our school population is made up overwhelmingly of white kids from among an overwhelmingly white population, and the people who choose to move here have historically been overwhelmingly white people.

What’s happening in New York is all part of larger national trends. While there are just over 1 million fewer young people across the country under the age of 18 years old in 2020 as compared with 2010, there are over 5.1 million fewer white kids in real numbers and over 687,000 fewer Black kids, while the population of Asian American, Hispanic or Latino, other race, and multi-race children all grew significantly.

The forces and trends shaping Adirondack Park school district enrollment numbers are the same forces and trends at play across Rural America. There is nothing unique happening in the Adirondack Park. As much as local political and community leaders like to blame the Park or the Forest Preserve or environmental groups for the challenges facing Adirondack communities, the story that is playing our here is the same story that is playing out in thousands of small towns and school districts across Rural America. The initial 2020 US Census data showed us that 53% of all counties in the U.S. saw a population loss from 2010 to 2020.

The challenges facing Adirondack communities should be seen as part of a series of larger trends facing Rural America and not something driven by particular state policies. The Adirondack Park has long suffered from a misdiagnosis of the causes of our population/school enrollment and economic challenges, which has led many to chase false solutions.

This article was also published at New York Almanack.

This article was also published at Adirondack Almanack.